I’ve had the pleasure of getting to know Ryan and Chase from Jacksonville’s Beau Outfitters over the past year or so.  As most of you know, I have a ton of family down there, and spend a bunch of time in the Jacksonville/Ponte Vedra area.  It’s great down there. 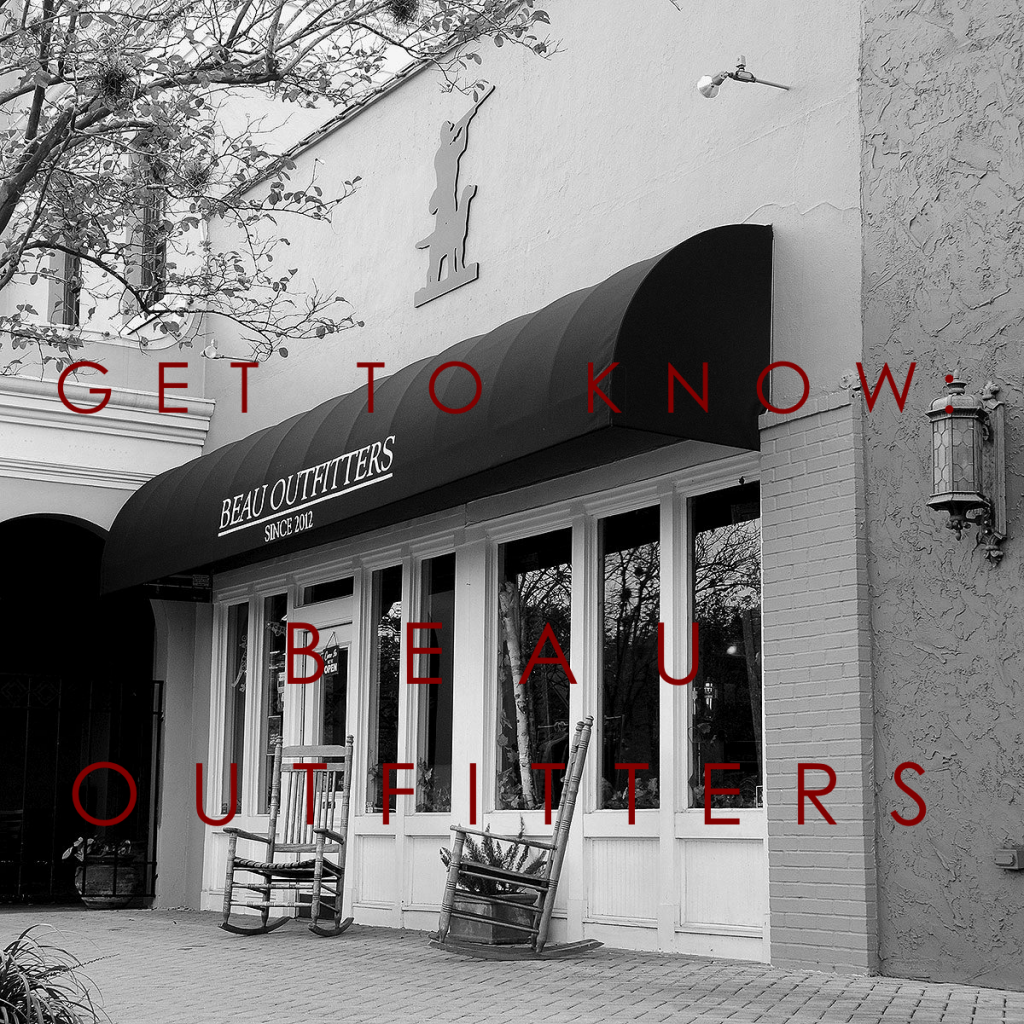 Beau Outfitters is getting hot and heavy with their online presence, as well as keeping a well-stocked store.  They were nice enough to sit down give their story a little color:

Talk about you and your partner – what is the history?

My business partner, Chase O’Steen, and I were both born and raised in Jacksonville, FL. We actually met while surfing one summer in Ponte Vedra Beach when we were about 12 years old. I was transferring to a new school the next fall that he was already attending. I forget exactly how we got to talking in the water but I know we hit things off pretty quickly because we had the same interest in the outdoors. Hunting, fishing, surfing at the time, we loved anything outdoors so it was kind of a natural friendship right off the bat. We ran with the same friend group that all had the same interests and we stayed close friends all throughout middle school, high school and college. 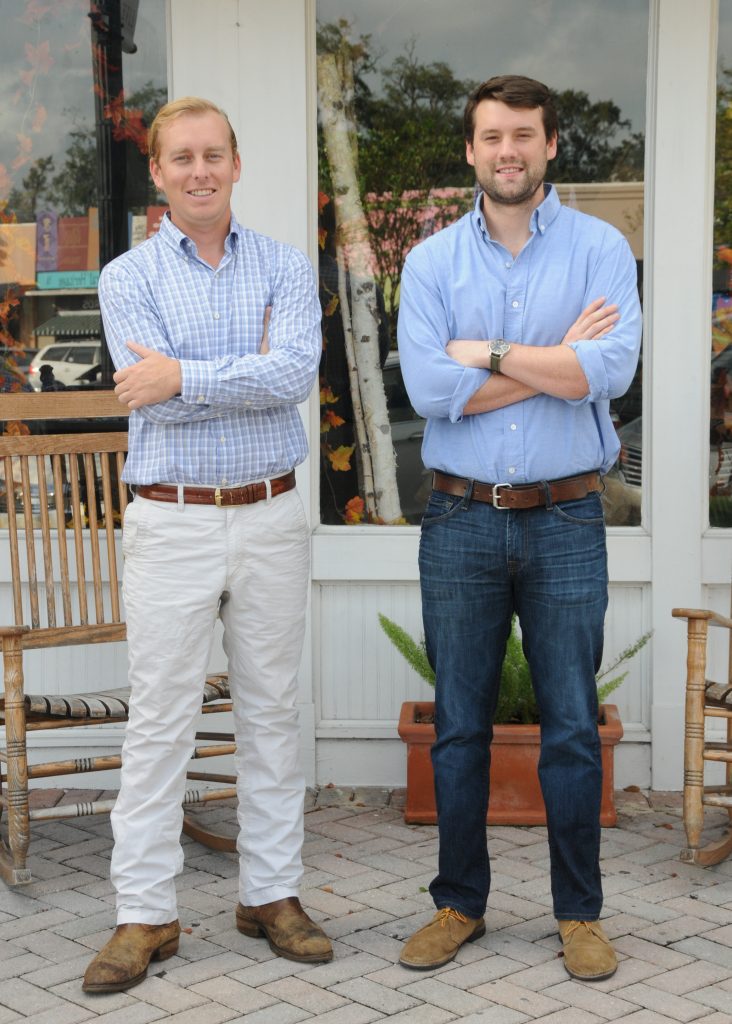 When we graduated high school, he went to Ole Miss and I went to Auburn. He and some of our buddies from Ole Miss would stay with us in Auburn to break up the trip and we’d always have a good time. I also visited them in Oxford whenever I could. If you’ve ever been, you understand why. It’s one of the best cultural towns in the South.

When it came time for us to reluctantly graduate, we both had jobs lined up back in Jacksonville. Neither of us necessarily had plans to return to Jacksonville after college, we both had developed a lot of friends (I a serious girlfriend) that were moving elsewhere, but I guess there was a bigger picture in the works. I returned with a job in finance and Chase had a job in real estate, so our paths continued to cross.

What made you two want to start Beau Outfitters?

The economy was still in the dumps when we graduated and, of course, we were trying to break in to the two best markets possible during the Recession, finance and real estate. We’d meet up during lunch just about every day and gripe about our jobs and be really pessimistic about the “real world”. Eventually, the direction of the conversations became “what else could we be doing?”. One day, I pitched an idea to him that had been in the back of my mind for virtually my whole life. Starting a store for guys that focused on a passion for the outdoors. 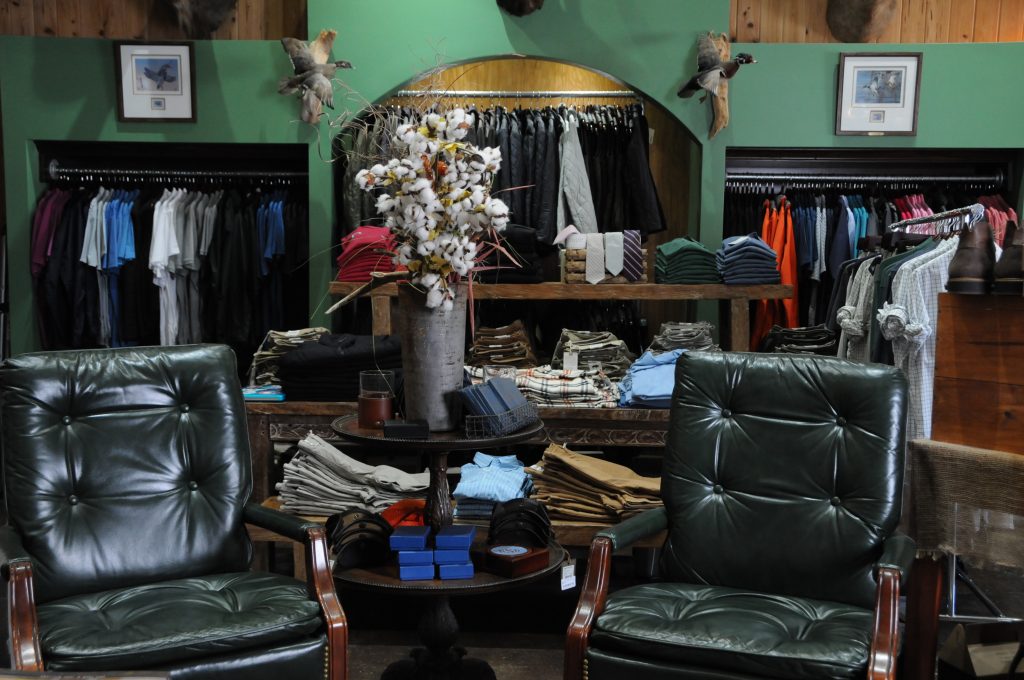 I got my passion for the outdoors from my dad. He always made sure we spent quality time together in a duck blind, walking pines, or cruising the winding creeks of a marsh. I also got my passion for classic men’s clothing from him. He’s always been a very fashionable guy with good taste, but in traditional sense. The kind of style that evokes a lifestyle. He was dapper but you knew he was an outdoorsman. Think an Orvis catalog or an old Ralph Lauren ad. Any time we would go out of town we would always find the local men’s stores. It’s a concept that’s been preserved for ages. I remember being a kid and walking through Charleston during the Southeastern Wildlife Expo thinking, one day I want to have a store like this. It seemed like people loved the places not just for the store, but the experience. You felt like you were part of a club just because you walked through the door. I wanted to be able to provide that feeling for people. 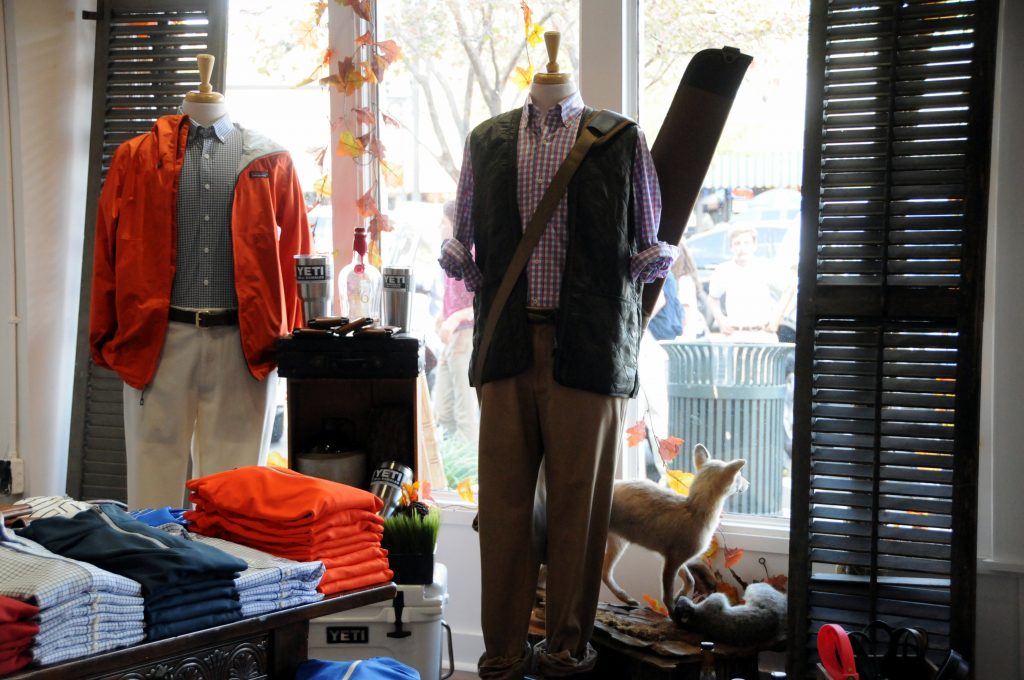 So, naturally, when I pitched the idea to Chase, he was all in. Both of our parents ran their own businesses, so it was kind of in our blood. Our personalities meshed well because I have a creative mindset and Chase is more analytical. When we told our families our idea, it was a mixed response of excitement and uncertainty. We received a lot of great advice along the way but we really just did it on our own the old fashioned way; we wrote a business plan, took it to the bank, and the rest is history. It’s been five years and we’ve been very fortunate to have some success, learned a ton, and we’ve had fun doing it.

What kind of guy shops at your store?

Our guy is like us. He cares about how he looks but doesn’t come across as artificial or trendy. He has a traditional but modern look. He definitely enjoys the outdoors and his style reflects it. We keep things in the casual sportswear realm because that’s what most guys love but we do so with a collection of the highest quality brands available. We also provide a lot of lines that upgrade our guy’s wardrobe with a little more sophistication, Ledbury is a great example of that. It’s certainly not just guys we are looking to reach out to though. I think one of the great things about our store is while we cater specifically towards men, it’s also a great place for women to come and find a gift for that guy that’s difficult to shop for. Our store specializes in traditional clothing but we carry a lot of awesome gift items that might not necessarily be a necessity for every guy, but enhance every guy’s life in one way or another. 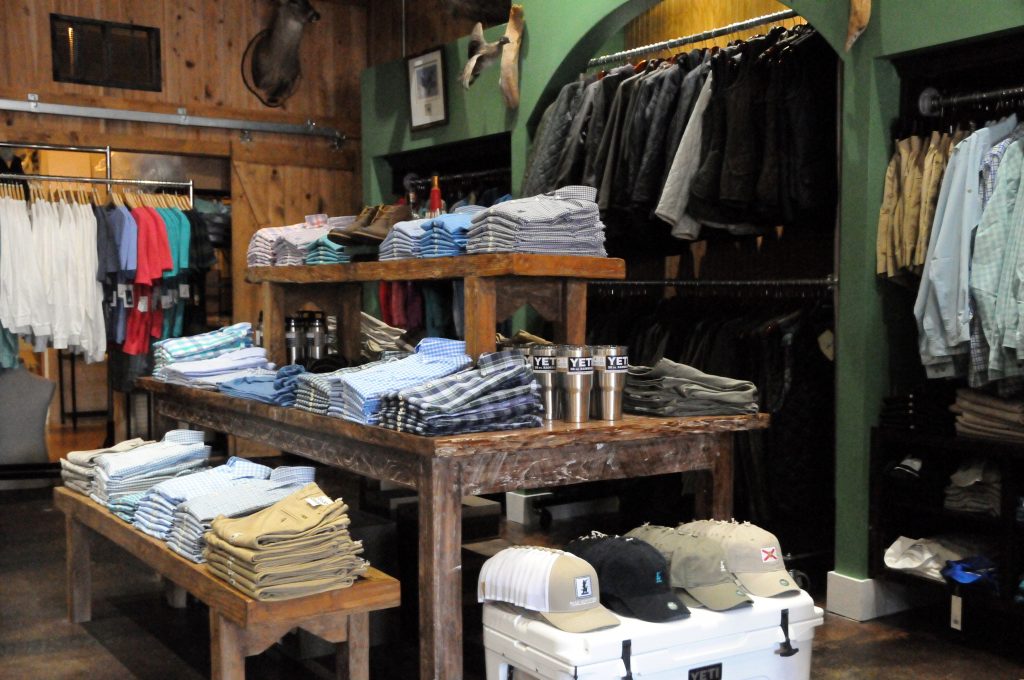 Why is Jacksonville a great spot to be?

Jacksonville has a ton to offer. It’s the largest city, land-wise, in the country and because it’s virtually a mix of South Georgia and North Florida, you sort of get the best of both worlds. We are an extension of some of the South’s amazing coastal areas. Yeah, it’s Florida so you have great access to beaches and top notch golf courses, but in-town is a completely different experience. There are several great historic districts with some of the best restaurants and entertainment you can find anywhere and most of the people that run them are as down home as they come. We’re the founding location to some of the greatest artists of all time like Lynyrd Skynrd, The Allman Bros., and Derek Trucks.

We have an NFL team, which is on the rise (hopefully) and the owner Shad Khan, who is regularly featured in Forbes, is investing a lot of time and personal capital into the city.

What’s most exciting is the fact that there is still immense potential and a lot of cultural growth happening. We’re excited to be a part of it and it’s really cool to watch this happen throughout the south.

What are your favorite pieces you are carrying this Fall?

I’m personally a huge Filson fan so anything new that they come out with I’m ecstatic for and have to have it. Some great pieces we’ll have for our climate are the Down Cruiser Vest, the Lightweight Dry Cloth Cruiser, and the Mile Marker Jacket. Patagonia continues to come out with awesome outerwear as well. My favorite for this season is the Reversible Snap-T Glissade Pullover. You can reverse between a weather-resistant surface or a fleece. I think that’s ideal for a lot of scenarios.

And finally, if I had to pick another item I’d say the Peter Millar Midtown Nubuck Boot in Cognac. It’s kind of an updated boot style that you can dress up or down for virtually any situation. Again, this is one of those pieces that updates a guy that has a traditional style sense but wants something new. 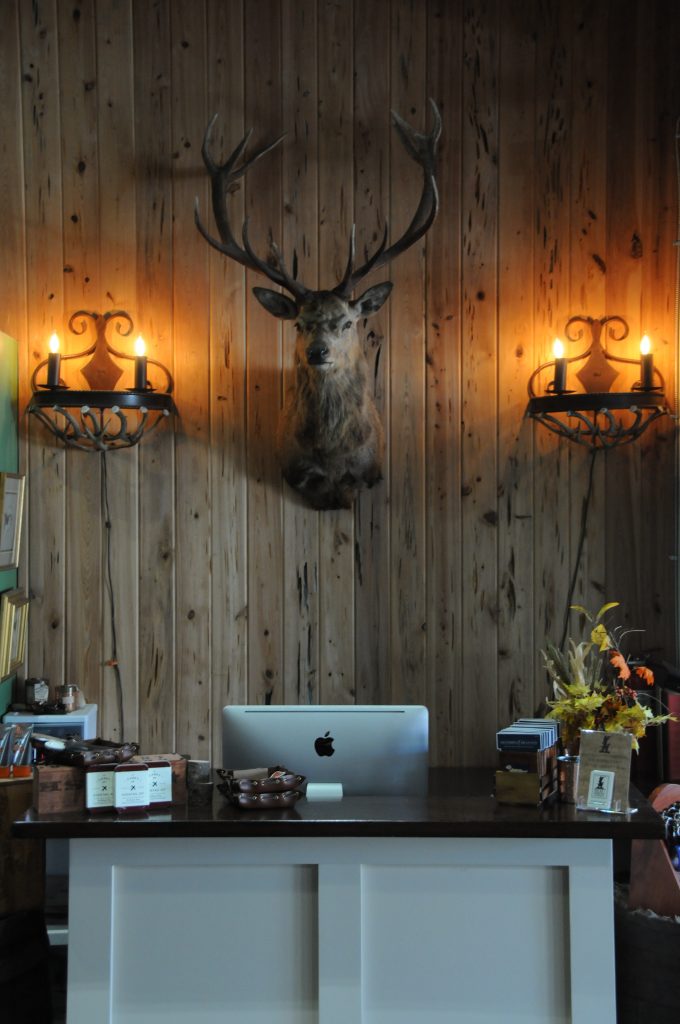 What do you like to do when you aren’t running Beau Outfitters?

I like spending time with my wife and our Lab. All three of us like being outside so it makes all of us happy. Chase likes to spend time with his girlfriend and has a Lab as well that he brings him most places. We take full advantage of all of the boating Jacksonville’s waterways have to offer. Chase is big on boats and can tell you just about anything you’d want to know about any of them. I know a little bit but enjoy being out there more than anything. We both love pretty much every kind of hunting and fishing imaginable. I’d say we’d both agree that it’s tough to beat a sunrise in a duck blind on the Mississippi or a morning fishing on a skiff. I’ve recently gotten in to freshwater fly-fishing in the past couple years and really enjoy that. We spent a week out in Colorado last year fishing the rivers and it was a pretty liberating experience. We also both love college football, of course, and everything that goes along with it. We definitely enjoy cooking out and hanging out with friends. We’re very fortunate to have a lot of great friends that share our hobbies of guns, sports, food, and drinks. Really, what else could you ask for?

How long is Gus Malzahn going to be the head coach of Auburn?

I was never on the “#FireGus” train. I think a lot of fans are skeptical but I personally think he’s a great coach and it would be tough for us to do better any time in the foreseeable future. Sometimes there’s factors unseen that are inexplicable. I think he was probably trying to do too much and was confusing the hell out of himself as well as all of the fans. He’s since turned over all the play calling to the offensive coordinator, who actually happened to be his first ever quarterback, and things have improved. The offense is still a little bit TBD but our defense should keep us in most games I think. 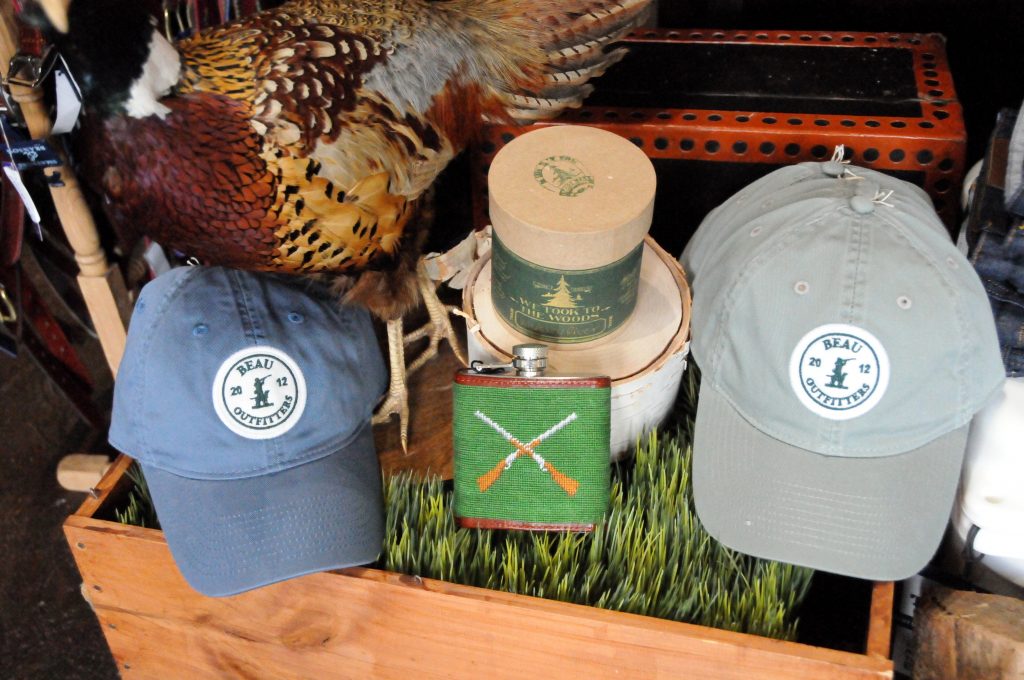 What’s on your Spotify playlist?

You can shop the entire Beau Outfitters collection online or visit their store: