Moving on through the wonderful gauntlet that are the Red Clay Soul gift guides, this is the the list for those that have EVERYTHING.  These are the gift ideas for your billionaire friends.  I know, I know, they are so hard to shop for.  The World Is Not Enough seems to be an apropos 007 theme for this gift guide.  Remember: money is no object here.  Ruling class stuff.  Ring the bell: 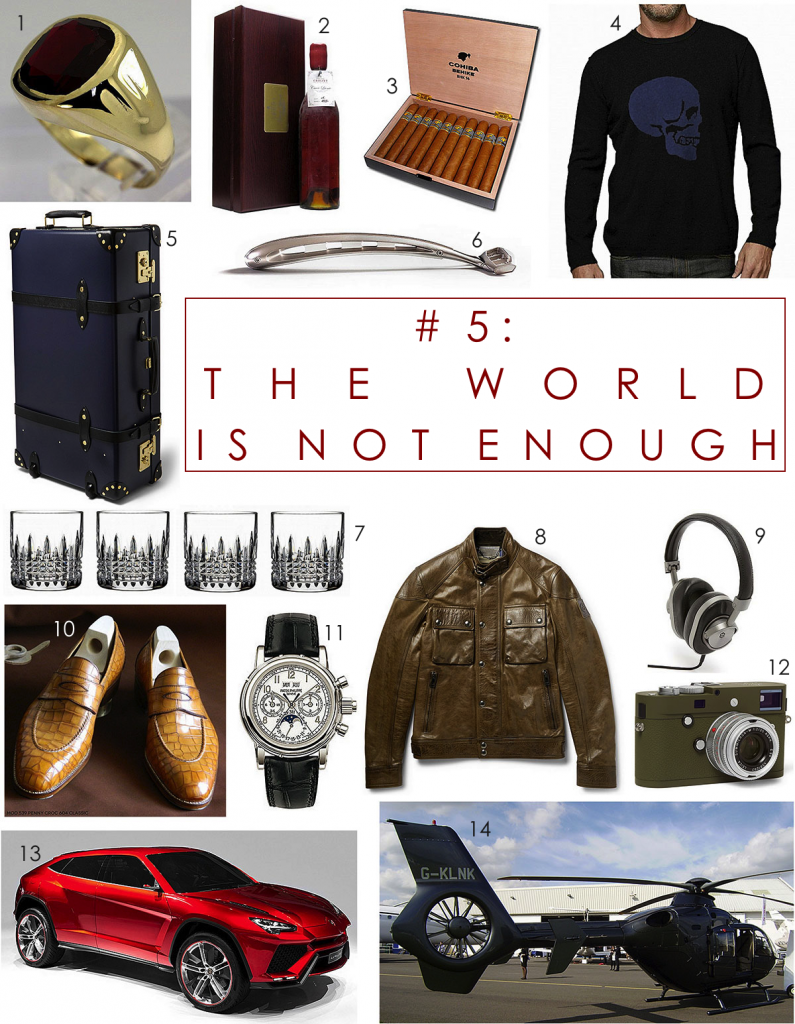 1. A Heavy Pinky Ring, Precious Jewel Included:  You came across that 3 carat ruby pinky ring while antiquing across the pond…don’t leave it there!  Get it and put it in a drawer.  You’ll find someone deserving.  Remember, the kiddos need a ring to kiss.
2. Croizet Cognac Leonie 1858:  Yeah, it’s expensive (just a touch under $157K a bottle), that’s why you mix with Seagram’s ginger ale – not that cheap grocery store stuff.
3. Cohiba Behike 56 Cigars:  Oh why not…just don’t inhale.  Remind him that he needs to fill up that humidor you got him last year, and that Gekko looked like a badass lighting up in his office.
4. 360 Cashmere Skull Crew Sweater:  This has to be the biggest ‘zero f&*ks’ cashmere sweater there is.  It has a freakin’ skull on it.  A blue one.  Hell, wear it with cowboy boots.  Why not?
5. Globetrotter 30″ Spectre Suitcase:  Big enough for his ego, as well as an extra everything.  And don’t you dare scratch it, Jeeves.
6. Zafirro Razor:  This is a man’s razor, even though the Mrs. will steal it immediately.
7. Waterford Lismore Diamond Straight Sided Tumblers:  An excellent choice for an afternoon nip, a happy hour toast, an after hours meeting, or for an Alka Seltzer in the morning.  Always give four (instead of the set of two), as it is plenty of ammo to throw at insubordinate employees.
8. Belstaff Racemaster Leather Jacket:  Not that you’d ever race anything (the insurance policy prevents it), but get a jacket that shows you get it.
9. Master & Dynamics Headphones:  As much for jamming out to his Kid Rock CD as much as for drowning out the urchins.
10. St. Crispins Croc Loafers:  Something to kick around in on Saturdays.  You know, a nice pair of crocodile loafers really round out the weekend attire.
11. Patek Philippe 5004P Watch:  You can’t remember if he already has one, but as with most things, why buy one, when you can two at twice the price?  Words to live by, folks.
12. Leica Camera:  Yes, it’s tough to find that stupid camera app on the stupid iPhone.  Having a nice little camera available will ensure to capture important moments.  Or evidence.
13. Lamborghini Urus SUV:  Something a little larger for those trips to Home Depot.  The Lambo’s extra space will come in super-handy for hauling lumber.  And you can go 0-60 in about four seconds.
14. Airbus H135 Helicopter:  The commute killer.  The ground force is complete with #13, time to start expansion on the air force.  Parking is the only #firstworldproblem to consider.