My friend Ryan does some great work at A Gentleman’s Journal.  His focus is on men being men, and doesn’t apologize for being Southern.  His posts are insightful, and inspiring.  His favorite thing lines right up: 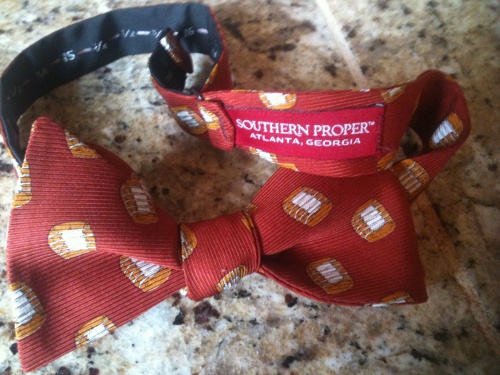 “This is the first bow tie I ever bought, and my favorite. Unfortunately due to its distinctiveness, it doesn’t get the heavy rotation I’d like to give it. I bought it with a couple of Southern Proper‘s now-defunct OCBD shirts, at Wm. King Clothiers in Johnson City, TN. I love this tie for three reasons: chief among those reasons, it was $25 (on sale because they were moving locations). The second reason is that to Alabama boys, cotton is ubiquitous. Few people outside cotton country even know what the motif on this tie is (it’s a cotton bale, by the way), so it feels a bit like our equivalent of a regimental tie: a symbol that binds those that know together. The third reason, and the one that lends this tie its sentimentality, is that this bow symbolizes to me a change of course. This tie reminds me of a time that I was content to go everywhere looking like hell. A time that I was content to show up to work, and half-ass when I was there. A time when I was perfectly alright just being some dude, just coasting. Around the time I finally made the initially terrifying choice to buy a bow tie, was the time that I was getting tired of that, and vowed to be an adult, to make myself a man. Heavy stuff for a tie, but there’s a reason this guy is my favorite. Also, it’s just plain cool.”