Introducing a new segment to Red Clay Soul today…we’re calling it ‘Have You Seen:”.  These reviews are meant to give you a first had account of some excellent movies, from a first rate perspective.  By first rate, I mean they are written by one of my oldest friends, MM.  First up, the 1985 classic: “Teen Wolf”.  Enjoy: 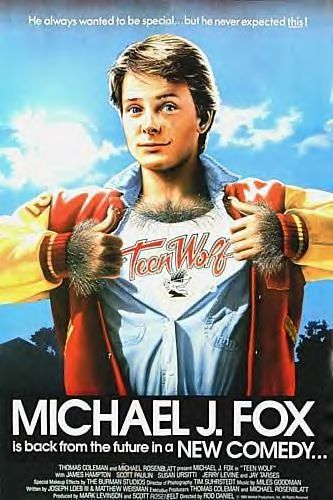 Teen Wolf is a movie about the trials and tribulations of a tiny high school kid who is also a wolf.  The main guy is Scott Howard who is played by Michael J. Fox.  Michael was also in the hit movie “The Secret of My Success” in which he had sex with his aunt.  There are no other real stars in Teen Wolf except for Scott’s dad who I’m pretty sure is somebody from Happy Days.

So Scott is just this normal teenager with a girlfriend named Boof and a best friend named Stiles.  These are two seriously dumb names and literally no one in the movie ever says a word about it.  Not one word about there being two kids in the high school named Boof and Stiles.  I’m not buying it for one damn minute.  Anyway, Scott and Stiles and some other people are on their way to a party.  They want to stop for beer first, though.  Scott goes up to the beer store counter and the guy says “You look young as sh!t. I need to see some ID.”  Scott gets super pissed at this and is all like “I said GIVE ME A KEG OF BEER!” in this weird tranny voice.  Then he also orders a bag of chips which won’t be nearly enough chips to share so it’s kind of a dick move.  So they roll up to the party and start to get drunk from beer.  Then everyone gathers around Stiles and his assistant (who I think is a prostitute) to play this game where contestants draw names out of a hat and then Stiles tells them how they have to make it to each other.  There’s this one time when a guy named Chubby has to eat jello out of a girl’s bra.  Everyone is laughing because Styles totally made his friend live out all of his high school insecurities by having to eat in front of everyone.  So now it’s Boof’s turn to draw a name for her next sex partner and she rigs it where she gets Scott.  Stiles tells Boof and Scott that they have to go into a closet for a few minutes.  Inside the closet, Boof is totally ready to get naked but then Scott gets all super aggressive and apparently Boof just wanted to make it all tender like.  When they come out, Boof’s shirt is ripped and Scott is so sweaty.  No one calls the police.

Later that night, Scott starts to feel sick from too much beer and chips.  He runs into his bathroom and starts growing all this gross hair and fangs and other dog parts.  He’s way freaking out about this because he is now a wolf.  His dad hears Scott crying and starts to bang on the door.  When Scott finally opens it, his dad is standing there and is also a wolf now.  Oh my god, though, the wolf that his dad turns into is the weakest looking thing ever.  It’s like Santa Clause if Santa were also a Care Bear and a dog.  So now the dad tells Scott that everyone in the family is a wolf and that nobody knows why. Scott decides that he wants to be called Teen Wolf and his dad is cool with that.

Later, Scott walks to school with Boof and they don’t talk about the almost sexual assault from the night before.  Then some school shit happens and Stiles probably acts like a sociopath some more.  After school, Scott’s basketball team, the Beavers, has a game against the red team who’s roster is made up of handsome adult males.  Also, Chubby is on the Beavers which is kind of confusing because I don’t think he’s all that athletic.  The best part is the basketball coach, Coach Finstock, who looks like he’s been in a ton of other movies, but he hasn’t.  Finstock is apparently there on some work-release program because he literally gives no f@$ks about coaching basketball.  So, as usual, Scott’s team is getting trounced.  Finstock is eating a boiled egg on the sidelines and Chubby is having a hard time keeping up.  Even though Scott is 4’1″ he somehow comes down with a rebound but then the red team all jump on him because he’s so small.  Scott gets super-pissed at this and turns into Teen Wolf.  Everyone literally BACKS. THE. F@$K UP. and is in shock because there’s now a wolf wearing a basketball uniform.  Finally, Teen Wolf breaks the tension and dribbles down for an easy two-hander.  Now they all start playing again.  I don’t think Finstock has even noticed that Teen Wolf is playing.  Turns out that wolves can way dominate a basketball game and the Beavers win.  Then they go have pizza and someone gives Teen Wolf a beer to bite into.  Also, this one hot girl that Scott likes sits next to him.

After the basketball game, Scott becomes super popular because everyone loves Teen Wolf.  He cruises down the halls at school all the time and high-fives tons of people.  Stiles wants to sell a bunch of Teen Wolf branded apparel because he’s pretty much a scumbag.  At first, Boof is all cool with Teen Wolf because he’s super masculine but then she starts to get pissed for some unknown reason.  So, Teen Wolf is doing high-fives and being awesome at basketball when the director of the school play wants him to play the main part.  Teen Wolf is way excited because that girl he likes, Pamela, is also in the play.  The play is about olden times and looks lame as all sh!t.  Teen Wolf doesn’t care though because in the dressing room, the girl gets naked.  Pamela is now dating Teen Wolf because of getting naked for him at the play.  One time, Teen Wolf and Pamela go bowling and they run into Pamela’s ex-husband, Mick.  Mick plays basketball for the red team and hates Teen Wolf so hard and then Teen Wolf throws a bowling ball.

So, the Beavers basketball team is kicking so much ass and the school dance is coming up.  Teen Wolf wants to go with Pamela, but Pamela says that she is back together with Mick from the red team.  Now Scott is all bummed because he has to go ask is old basic-ass girlfriend, Boof, to the dance.  Boof says “I’ll go with you but you can’t be Teen Wolf the whole time because of all the totally hot babes you’ll talk to.”  Scott agrees and then he starts to get dressed for the dance.  Since he’s going to be the wolf for a little bit at the dance, he has to blow dry all of his body hair and also wear this way cool suit that will make ladies want to do it with him.  Boof and Teen Wolf go to the dance and Teen Wolf rolls out this pretty badass wolf dance that everyone learns how to do.  Then Boof wants him to take off the wolf stuff and be Scott again which, how lame is that?  So now Scott and Boof are dancing when Mick from the red team starts beating him up.  This pisses Scott off greatly so he turns into Teen Wolf and scratches Mick on his adult male chest.  The principal comes in and kicks Teen Wolf out of school.  Then Scott’s dad shows up as SantaCareBearDog and uses his wolf powers to make the principal pee his pants.

The last scene is when Scott tells Coach Finstock that he doesn’t want to be Teen Wolf for the championship game against the red team.  Finstock is all like “The f@$k you say, bub?  You better be the wolf or else.”  Scott refuses and Finstock goes back to not giving a sh!t.  The Beavers are holding their own against the all adult male red team.  The Beavers are down by one as time expires but Mick from the red team gets a technical foul called on him so Scott gets to shoot free-throws.  He makes them both and the red team is humiliated in defeat.  The movie ends when everyone runs on the court to taunt the losers.  There’s also man with his actual penis out in the background as the credits roll.