Recently, it seems like they put an American flag on nearly everything, and it’s safe to say that is gets a little ‘common’.  There is nothing common about American pride. I’m a huge red, white, and blue guy, but I prefer a ‘less is more’ approach.  Too much makes you look like a professional wrestler.  With the 4th coming up, here are a few American flag themed pieces that work just fine: 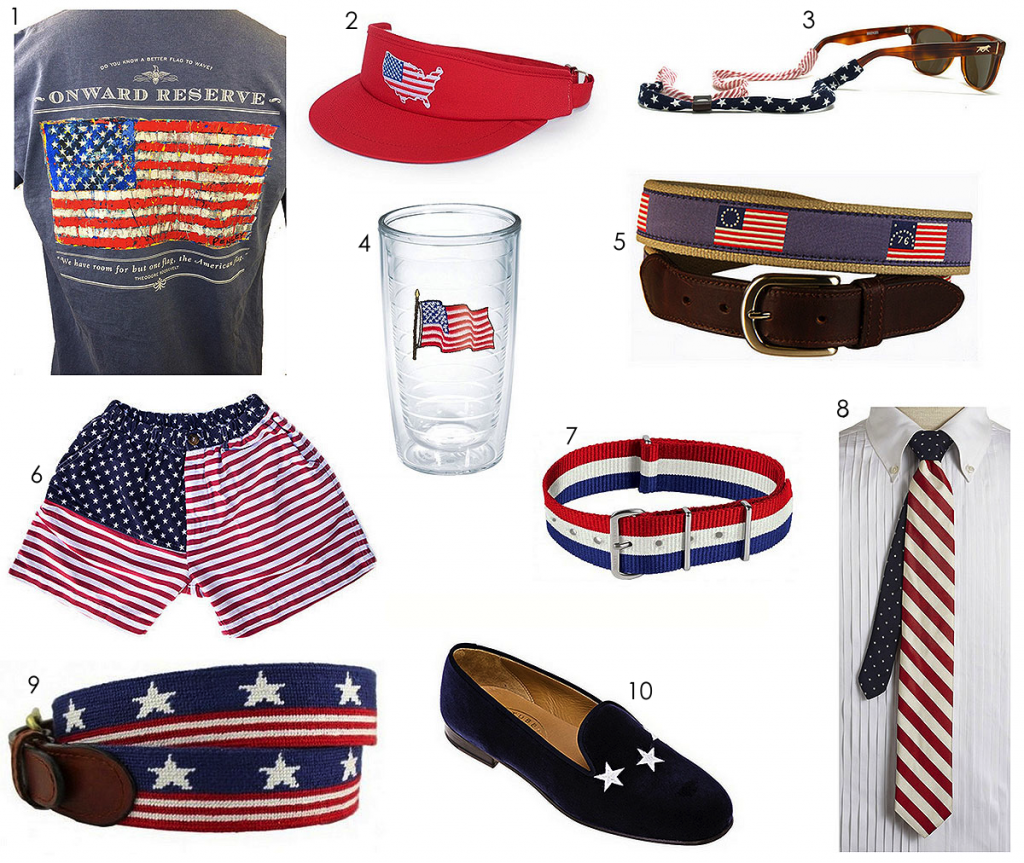 1. Onward Reserve Penley Flag Tee:  You will need a tee over the 4th, as hopefully you are at around some sort of body of water.  Get the right t-shirt from famed Georgia artist Steve Penley.
2. State Traditions America Tour Visor:  It’s great that tour visors have become the norm again, and State Traditions was out front helping to lead the charge.  Not only to they offer state stuff, but America stuff as well.
3. Knot Belt Co. Stars and Stripes Shades Straps:  Eventually we grow out of sunglasses straps, but it’s always smart to have some when you are around the water.  Sunglasses don’t float…so prepare accordingly.
4. Tervis American Flag Tumbler:  Don’t sweat it.
5. Belted Cow Historical American Flags Belt:  This is one of the best American flag belts out there…tasteful…it shows that we’ve been around for a while.
6. Chubbies ‘Mericas:  Why not?  These shorts are awesome – for all the right reasons.  Short inseam, good fit, and adorned with Old Glory.  Pair these with a white polo and drivers and you are ready to rock.
7. Smart Turnout Grosgrain Watch Band:  Not too obvious, and very functional.
8. Social Primer Broad Stripes Bright Stars Tie:  Even though a lot of 4th parties are ‘no tie required’, this one could make you think differently…
9. Smathers & Branson Old Glory Belt:  Excellent take on the stars and bars from S&B.  Not too obvious, and classic enough to wear year-round.
10. Stubbs & Wooten Commodore Velvet Loafers:  For those seeking independence from boring footwear…and yes, they are velvet.

What are you sporting this 4th?