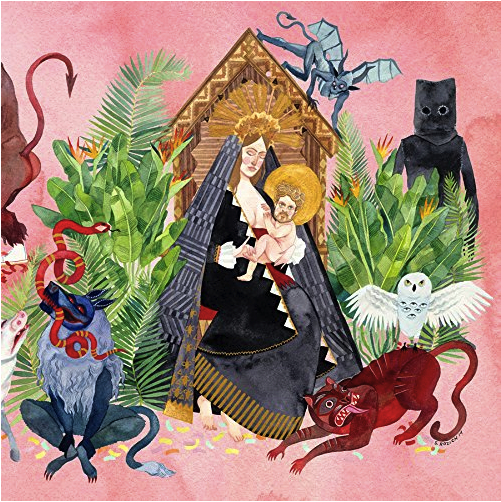 Guys and gals – we’ve got ourselves a reader. Over the past three or four weeks, I’ve been gorging myself on the newest offering from Father John Misty called, “I Love You, Honeybear”.


Father John Misty (aka Josh Tillman) is a little off the beaten path from my everyday twangy, rock-ish tastes. My general description lies somewhere between Leonard Cohen, Tom Waits, and the Dude. In fact, this music begs to be heard on lazy rainy mornings and hazy late nights with a warm bath, and possibly some candles. My introduction to Father John Misty came a few years ago during a Letterman performance. The song was called, “Only Son of the Ladies Man” and I remember immediately thinking that the sound was very Los Angeles with laid back tambourine vibes and the tear of a mariachi through the chorus. I found out that Tillman was based out of L.A. via Seattle via Maryland and it all came together.

The first single off the new album is called “Chateau Lobby #4 (In C for Two Virgins)” and aligns nicely with the previous album, “Fear Fun”. My assumption is that the title of this song is a dry tribute to John and Yoko as “I Love You, Honeybear” could be a love letter to Tillman’s courtship and recent marriage. She’s name checked (Emma) a couple of times and the subject of, “Nothing Good Ever Happens at the Goddamn Thirsty Crow”, a song about petty jealousy, pick up lines, and the Georgia Crawl. He’s heavy on the sarcasm and I guess if he has a trademark, it’s his constant use of dark humor. There’s groupie love with jaded Millennials in “The Night Josh Tillman Came to Our Apartment” and an apathetic shrug to the lives of the modern American bourgeoises in “Bored in the USA”. My current favorite, “Strange Encounter”, features fuzzed out spy guitar over Brian Wilson orchestration and wouldn’t be out of place on a Portishead or Black Keys record. And there are drugs. I think it’s one of the best releases of early 2015 and I would pair it with a Golden Bowl from the Grit in Athens and some quantity of Promethazine.

But do what’s right for you and enjoy it responsibly!