Being a huge college football fan, it helps that I live in SEC country. Maybe it is the other way around – it could be that I’m a huge college football fan BECAUSE I live in SEC country…
There is nothing like gameday – Especially at an SEC school (and some ACC schools…). I try to make it to a few games at different campuses each year, and am yet to have a bad time. From Southern Gent’s post on Tailgating, I have experienced gameday at the following schools: UGA, Bama, Tennessee, and Ole Miss (nos. 9, 7, 4, & 1 respectively), among many others. I have to mention Auburn & Clemson as great southern schools that should be included on that list in terms of high-end tailgating.
The thing I like most about tailgating in the South is that it is an event. People take it seriously. We dress up. Eating well is standard – it isn’t a bucket of chicken and a six pack. Arriving hours before the game is normal – and we HATE noon kickoffs. It’s pride. It’s a religion. 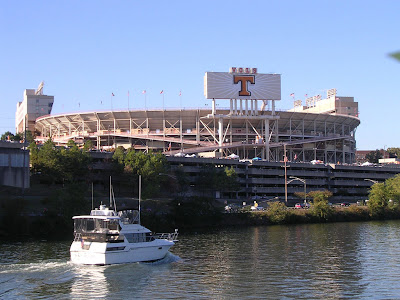 Neyland Stadium
Image: city-data.com
I had the opportunity to experience Knoxville last weekend for the Auburn vs. UT game. A lot of orange. Auburn travels well, and they brought a crown. The Vols always show up. Even though you can’t move in any bar on the strip (Cumberland), it’s worth trying just to see the crowds. You will know the words to ‘Rocky Top’ prior to kickoff. Calhoun’s on the River is great as well – good ribs and an even better view. The actual tailgating is spotty around campus, but can mainly be found around the Stadium. Since it was a 7:45PM kickoff, most were well lubricated for the game. 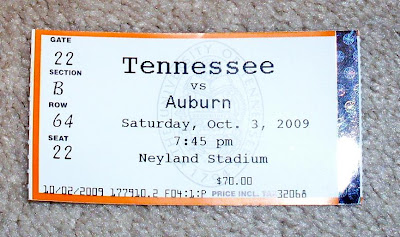 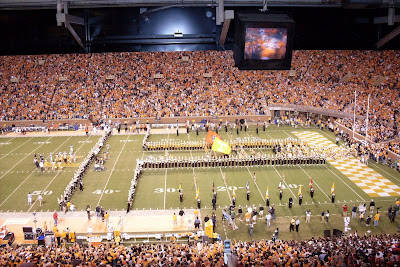 The Power T from our seats
I’m headed back up to Knoxville this weekend to watch my Dawgs face the Vols. It will be a totally different experience since we have the dreaded noon kickoff…oh well.