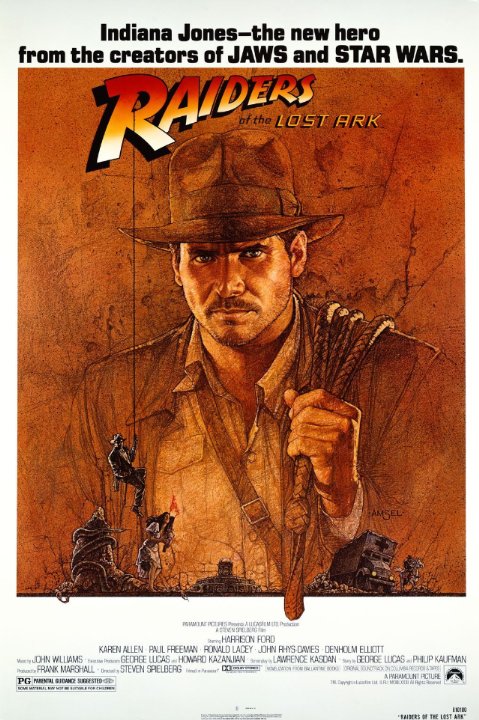 What happens is that Indiana Jones is a college professor who hunts for old antiques on the weekends. Everyone calls him Indy except for some people who call him Dr. Jones. The movie starts when Indy is walking through the woods with a bunch of other guys looking for some treasures. They go into this cave which has tons of booby traps. After a couple of guys get killed by the booby traps, Indy finally finds the treasure and steals it. The cave gets really pissed about this and then a giant boulder rolls toward him. Indy is able to get away from the boulder, but gets trapped by his rival treasure hunter. His rival steals the treasure from him because he has a bunch of Indians point arrows at him. Then Indy runs away and gets into a plane to escape. As he’s escaping, there’s a snake in his seat which he throws away.

The next day at college, these guys come to visit Indy to tell him that he should go search for the Ark of the Covenant which is this really old box that Jesus from the bible owned like way forever ago. The guys tell him that the box as tons of magic in it and that Hitler is also trying to find it. Indy says he’ll look for it. Later that day, he goes to his house which is super messy and packs for his trip. The only thing he packs is a coat, a gun, and a whip. It turns out that Indy is a whip master and always uses one to help him get treasure by whipping things and people.

The first stop on the trip is Alaska. Indy knows this hot babe there that has some secret decoder wheel that he needs to find the Ark. The girl’s name is Marion and is played by Karen Allen from Animal House. Anyway, Marion owns this shitty bar in Alaska where all the Eskimos go to drink alcohol. Before Indy gets there, Marion is playing a drinking game against one of the Eskimo’s grandmothers. Marion wins and starts to clean up the bar. Then this group of Nazi bad guys show up. The main Nazi is this way terrible little fella who is very unattractive. He tells Marion to give him the decoder wheel and she’s all like “Cram it, bud. It’s mine.” Then the Nazis threaten to poke her in the face with this metal fire pole. Marion gets super scared at this and tells them she’ll get the decoder wheel. Just then Indy uses his whip to take the fire pole from the Nazi and a battle ensues. Everyone is shooting each other and fighting. Finally, Indy and Marion win the fight and the Nazis have to leave. Then she tells him that she’s pissed because a long time ago she had sex with him, but then he never called her back. This is not surprising because already she seems like a super pain in the ass. But here’s the thing, you guys, Marion is supposed to be 26 years old and she said that she made it to Indy like 10 years ago. I’m not sure what the laws on statutory rape in Alaska are, but this seems a little creepy and Indy should probably be arrested immediately. So now she says that she’s going with him to find the Ark and he’s cool with that probably because he knows that they’re going to do it again (legally, this time).

Next, Indy and Marion go to Egypt where the pyramids are. They meet up with Indy’s friend Sallah who is played by this guy who was also in The Princess Diaries 2: Royal Engagement. Sallah is going to help Indy find the Ark by having his Egyptian employees dig for it with shovels. So now Indy’s all ready to find the Ark, but then Marion gets kidnapped while she’s trying to buy fine silks and spices at the flea market. The Nazis grab her and Indy runs to save her. Then he gets into a fight with this Egyptian ninja who does a whole bunch of sword tricks. Indy’s all like “Nope. I have a gun.” and then he uses it to shoot the ninja. However, the Nazis still have Marion and then Indy thinks that she died when a truck blows up. He’s so super bummed about this and starts getting drunk with this monkey in a bar. Then these guys come to tell him to come with them. At this point, Indy doesn’t give a shit about anything because he’s so sad that he didn’t have sex with Marion one last time. So, he goes with the guys and they take him to another bar where his old treasure hunting rival is smoking drugs from a hookah. His rival’s name is Belloq who totally looks like Brad Wesley from the movie Roadhouse, but isn’t. Belloq is the worst name ever and everyone hates him because of it. Anyway, Belloq is helping the Nazis look for the Ark. Indy gets pissed at him and tries to start a fight when Belloq’s goons point guns at him to shoot him with. Then a bunch of kids show up and the goons let him go.

Now we see that Marion is tied up in a tent that Belloq lives in. Indy sneaks into the tent to rescue her but then decides not to. So now it’s night time and Belloq walks in and gives Marion some rolls to eat. She stuffs all of the rolls into her face at one time and looks so dumb doing it. Belloq also gives her a dress that he wants her to wear because I guess he thinks they’re dating now. She puts it on and then steals a knife to stab him with later on. She’s acting all nice and like she’s going to do it with him so they start to drink all this booze. Remember from before that Marion is an alcoholic and can drink tons of alcohol. So Belloq gets way drunk, but Marion, the alcoholic, doesn’t so then she pulls the knife on him. Just then, that terrible little bad guy Nazi from the scene in Alaska shows up. He takes his coat off and puts it on a coat hanger which Marion gets so intimidated by.

The next day Sallah’s Egyptian employees find this underground lair that they’ve been looking for. After getting dressed in a bunch of robes and shit so he’ll look like an Egyptian, Indy goes down into the lair and uses the decoder wheel to shoot a laser onto a map that shows where the Ark is. Then he and Sallah go to this other underground place where there are just tons of snakes waiting to eat them. At some point, Indy takes off his robes and puts on his other clothes. They battle through the snakes and get the Ark. After Sallah takes the Ark up a rope to the surface the bad guys show up and take away the rope. Then they throw Marion in which makes Belloq so pissed off because he liked her so damn hard. So now Indy and Marion are in this giant pit with tons of snakes. Oh my god, you guys, there are like a million snakes in there. So Indy and Marion try to find a way out and they end up pushing this giant statue through the wall making an escape hole. They crawl out of the hole and are now on some airfield which is kind of confusing because weren’t they just underground? How did the hole transport them back to the surface? Anyway, they’re at this airfield when a bad guy spots them. The bad guy looks like Jesse the Body Ventura from wrestling and he tells Indy that he is going to beat the shit out of him. They start to fight and the bad guy is winning. Indy is now on the ground about to get the finishing move when a plane rolls up and totally chops the bad guy into pieces with the propeller.

After watching the guy get killed by the propeller, Indy sees that the Nazis have loaded the Ark onto a truck to take back to their hideout. Indy jumps on the truck and starts to kick people’s asses all over the place. Then he gets dragged behind the truck and doesn’t die from doing that. Finally, he defeats the last guy and has the Ark. He then gets on a ship with Marion and the Ark. The ship’s captain is this guy who wears a turtleneck and smokes a pipe. So now they’re on the ship and Indy is looking at all of his wounds. Then Marion starts acting all lustily and kisses his chest and body.

The next day, the Nazis attack the ship. They steal the Ark and Marion and put them on their boat. Indy sneaks onto the boat and puts on a Nazi disguise. The Nazis take the Ark to some other desert place and while they’re walking with a bunch of camels and ponies, Indy points a bazooka at them and tells them to give it back. Belloq is there and he says “We all know you aren’t going to shoot the Ark and all of these camels, so surrender to us now”, which Indy does. Now Indy and Marion are tied to a tree. Belloq is dressed like the Pope and all the Nazis are standing around waiting to open the Ark and see all the magic tricks. Indy tells Marion to not watch the magic because it will make her eyes fall out onto the ground. Finally, Pope Belloq opens the Ark and is kind of pissed because there’s just a bunch of sand in it. Just then, all these ghouls and monsters come out of it and start to totally rage out on everyone. This scene is way badass because the ghouls and monsters kill people by shooting lasers into their hearts, exploding their heads, and making their faces melt right off. Indy and Marion do not get face-melted though because they have their eyes closed.

Now all the bad guys are dead and Indy takes the Ark back to the Supreme Court in America. The Ark gets put into a box in warehouse with tons of other stuff in it. Indy is so pissed because he wanted to keep the Ark as a souvenier, but the government wont let him. Then the movie ends.

This movie is the first in a three part series. The next one is good too because Indy has a Chinese kid for a sidekick who is actually Data from The Goonies and says all kinds of funny shit.