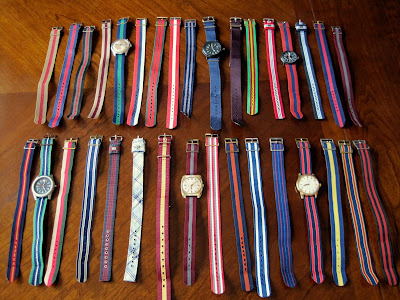 Yes, when I first saw all of these laid out, I thought I might have a problem. Oh well…at least this one isn’t expensive. Above is my collection of nylon watch straps. It has taken me about four years to accumulate all of these. They are mostly from Central Strap in NYC, but you never know where they will pop up. Some strap and watch details: 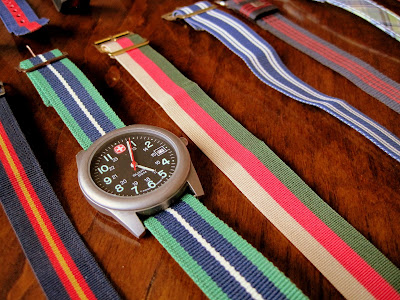 Swiss Army watch from the Marlboro collection – found this at a garage sale. $10. The strap is an old J. Crew model. 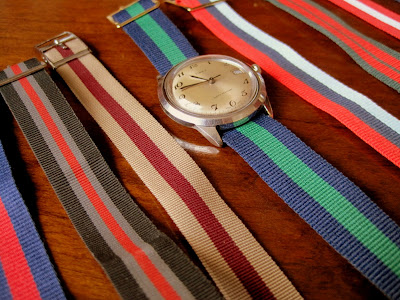 Old Timex self-wind. Got it on Ebay for about $10 shipped. Works like a champ. Central Strap. 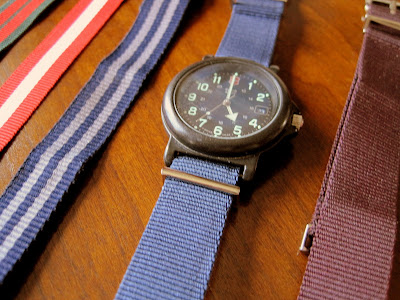 Swiss Army Renegade. One of my favorites. I’ve had this since high school, and it used to be on the original rubber band. Works well on the new(er) J. Crew Nato straps. 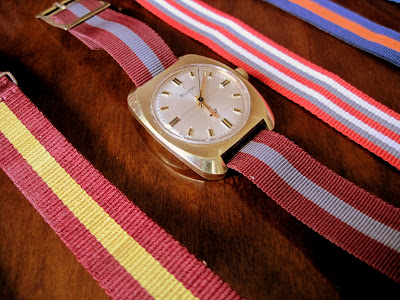 Old Bulova Sea King. Ebay for about $20 shipped. It’s a self wind and could probably be cleaned, but I don’t know if it’s worth it – it seems fine like it is. The strap is from a bag of straps I found on Ebay. I’ll have more on that later. To the left is probably my favorite of the collection – got this Smart Turnout Nato down at Sid Mashburn’s a while back. 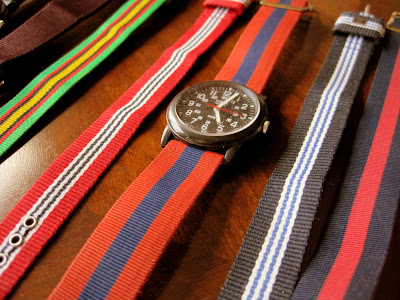 Timex Camper found at Goodwill. Replaced the battery and we’re in good shape. The crystal looks like someone chewed on it…but again, it works. The strap was from a vintage collection found on Ebay. Believe it – they are out there… To the left and right are some Brooks Brothers models – good, but only about 16MM, not the standard 18MM, so they usually give the Sea King a ride. 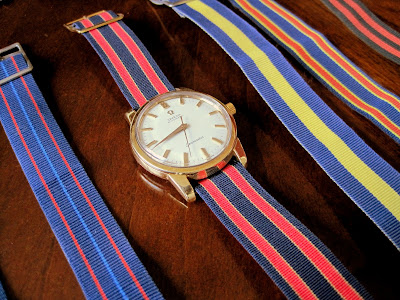 The Omega Seamaster – leader of the pack. The strap is from the same vintage collection I found on Ebay.
I have my eye on a few more, but I’m not pushing the issue. Smart Turnout has just about every flavor you’d ever need, and they are built like tanks. Central Strap has a nice collection as well – and are probably the best deal out there (5 for $30). J. Crew has jumped on the bandwagon with some good ones as well.
As for watches, I’m set. I would maybe pull the trigger on a Seiko SKX009, only because I like the Pepsi bezel. This paired with a navy/red Nato would look very 80’s Polo Ralph Lauren. Not too bad: 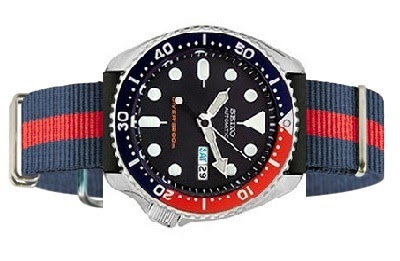 These straps are a great way to add a little character to your wrist. Most of them are pretty subtle, but the GTH ones do speak volumes. The best part about these straps – when it gets nasty, throw it out.