How refreshing is it to see college football news and reports starting to frequent the Interwebs and the local sports reports?  With Spring practice in full swing, it’s a great sign that we are only a few short months away until kickoff.  With that, I’ve put together the Red Clay Soul pre-season College Football Rankings, sponsored by my friends over at State Traditions.  I’ve picked my top ten, and to commemorate the event, the boys from Birmingham want to give away ten hats and koozies to ten lucky readers: 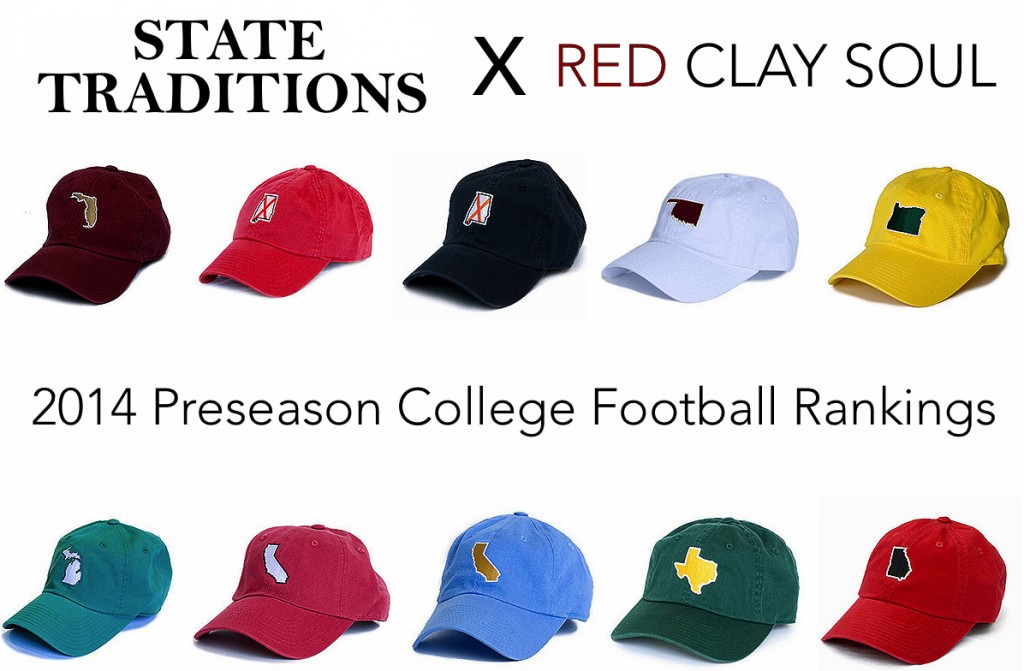 1. Florida State Seminoles – 8 returning starters on offense including Jameis Winston and 6 on defense…no reason that they won’t be back at the dance this year.
2. Alabama Crimson Tide – They have a machine in Tuscaloosa.  They just reload.
3. Auburn Tigers – Will the 2013 luck continue into 2014?
4. Oklahoma Sooners – Sophomore QB Trevor Knight is the real deal, folks.
5. Oregon Ducks – An easy schedule and Heisman frontrunner QB Mariota.
6. Michigan State Spartans – Wins over Ohio State and Stanford in 2013 will provide some serious momentum.
7. Stanford Cardinals – They’ve played in four straight BCS games, and don’t show any signs of slowing down.
8. UCLA Bruins – Averaging almost 10 wins a year and a strong returning offense.
9. Baylor Bears – They may rack up a million yards on offense this year.
10. Georgia Bulldogs – They have as much talent as anyone in the country.  If they can stay healthy, look out…

As I mentioned, the good folks at State Traditions want to give away a hat and a koozie of their choice to ten lucky readers.  Leave a comment to this post with your thoughts to enter.

Entries must be in by midnight on Monday, March 31st.  I’ll announce the ten winners on Tuesday, April 1st around lunchtime, who gets a State Traditions hat and koozie from the school of their choice.