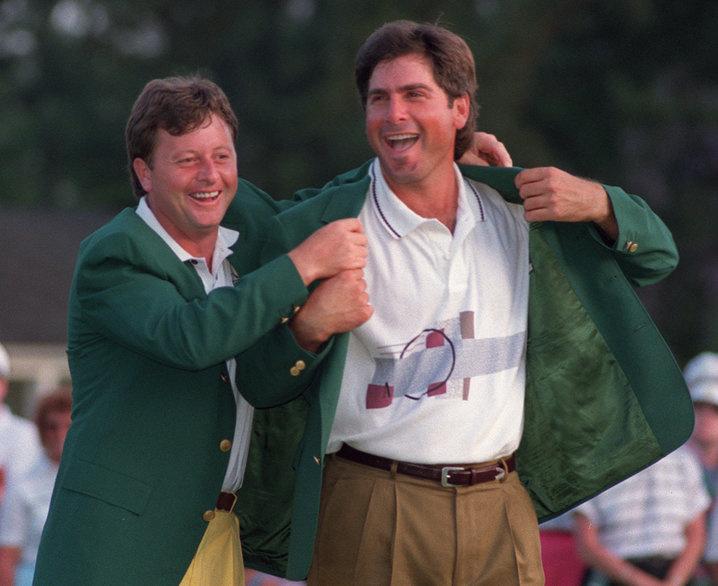 And it’s time to start tournament play at The Masters.  It doesn’t get any better folks.  I’d like to go ahead and apologize for the all the Masters related content you are about to be inundated with over the next four days.  It’s coming…like Winter.

I reached out to a bunch of my friends to get their picks this year…here’s who they’ve got:

Caroline Fontenot of Back Down South and her super-cool husband Mark: I’m hoping to cry over another Bubba win. Mark thinks it’s gonna be Rory.

Josh & Odini of Res Ipsa: We’re going to go with Dustin Johnson to win in Augusta, with Bubba as a want-him-to-win-but-won’t pick.

Charles Nelson of Nelson’s Green Briar Distillery – the producers of Belle Meade Bourbon: Brandt Snedeker! I had and art class with him in high school!

The Criquet Shirts boys:
Billy – Miguel Angel Jiminez, or MAJ as I like to call him.  After last years 3rd round 66, another year of stogies and wine in the system, and overall general seasoning that all men can take inspiration from, how could I not pull for The Most Interesting Man in Golf.
Hobson: I’m picking Spieth. I know, he’s kind of a lame pick but kid has chops.

The Martin Dingman pick from the Ozarks:  Gotta go with Bubba!

Claude Pope of Bald Head Blues: I think Dustin Johnson is going to win…. he’s a big hitter and can work the ball around the corners.

John Ashworth of Linksoul: I gotta go with my Linksoul Bro’s, either Geoff Ogilvy or Ryan Moore.

Jeff Swedberg of Orvis: I’ve thought about this all week. After seeing Snedeker bounce it off the rocks at Bay Hill I think luck is on his side. Vegas has him 45/1. That’s who I’m going with even though I always have a soft spot for the big easy. I’m sure Rory will be in the mix too.

Micah Whitson of The Old Try: I got Jordan Spieth coming in tops.

Shawn Reed of Form Function Form: Patrick Reed; we’re related*. (*note, absolutely no evidence that we are related). I’ll get excited if Tiger plays, or Mickelson does well.

My Advisor: Jordan Spieth puts on a putting clinic and hits it straight just enough to win his first major

My Lawyer: Tiger Woods. Because I said so.

The official Red Clay Soul pick: Freddy “Boom Boom” Couples.  He always plays well at Augusta, and we’re due for another Nicklaus ’86 or Crenshaw ’95 moment…