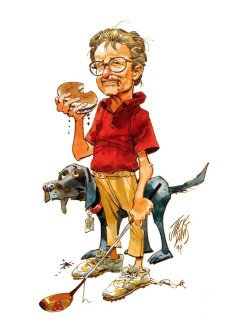 How about a little Lewis Grizzard to keep the Masters week going?

Augusta-The press corps that covers the Masters at Augusta National ranks just above the guys with the pointed sticks who go around the course picking up paper “the best gallery in golf” strews from Flowering Paranoia to Blooming Threeputtomia.

I was lucky enough this year not to qualify for a Genuine, Official, Keep-It-Pinned-on-Your-Person-at-All-Times press badge.

So I have set up shop in a tree overlooking the beautiful par-three 12th. I have disguised myself as Tom Weiskopf having a nervous breakdown.

Tom Weiskopf is one of my favorite golfers. Last year, he shot a bad round in the Masters and stormed out of the locker room with a number of reporters in hot pursuit. He slammed the screen door that leads to the clubhouse grill with such force it knocked the frown off a Pinkerton man.

“Tommy takes a bad round hard,” somebody said. They should take away his shoelaces and hide all sharp objects while Weiskopf is on the grounds.

The toughest thing about being a member of the press corps for the Masters tournament is the players’ interviews. Contending players sit on a platform in the press barn while grown men from Tokyo to Tuscaloosa write down everything the golfers say concerning the day’s rounds.

The fun part is when a golfer “goes over his round.” Going over one’s round is describing in full detail every blow struck for 18 holes.

It is not as boring as watching wheelchair needlepoint, but it is close. I have this recurring fantasy about listening to a golfer go over his round. I know what Nicklaus did. He hit a drive down the middle 4,000 yards, hit a wedge to the stick and tapped it in with his middle finger. On 16, he walked across the water to the green after holing his tee shot. That’s everyday stuff.

I want them to bring in Gatewood Dooper from the Clubfoot Links in Oshkosh who got into the tournament by some strange quirk of Masters eligibility fate and then played like a goat with muscular dystrophy.

Let me hear him go over his round with the world’s press assembled. Here is Gatewood Dooper describing his 107, worst round in Masters history:

“On the first tee, I wet my pants. That’s a two-stroke penalty and very embarrassing. I was hitting three on my opening drive. It landed in a trap. I wound up with a nine. My wife went back to the car.

“On 2, I went into the trap again. The one behind number 3 green. I managed to save double bogey. My sponsor made an obscene gesture and went looking for my wife.

“I made the turn at 17-over. Before I teed off on 10, the tournament committee asked me to withdraw, my wife came back to the course and asked me for a divorce, and my sponsor stripped his company’s name off my bag and hat.

“I fell into the lake on 12. One of the marshals pushed me. My drive went into the crowd lining the fairway at 13. I had to take another penalty. They hid my ball.

“Number 14 and number 15 were both disasters. At 16, they threw beer at me. At 17, I twisted my ankle. My playing partner tripped me. At 18, they sang “Turkey in the Straw” while I tried to hit out of the rough.

“After I finally putted out, they put my card in the paper shredder and I had to hightail it to the locker room. The tournament committee had ordered sniper fire from the roof of Ike and Mamie’s cottage.”

…it doesn’t get any better, folks.  Lewis is the man.