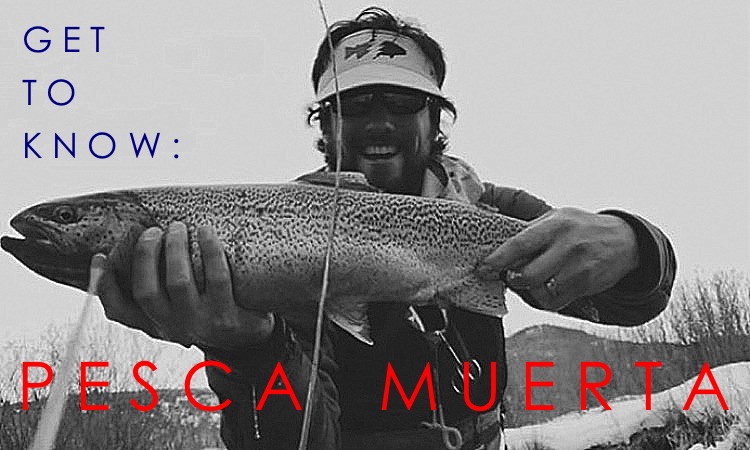 It’s this time of year that the warm weather shifts our outdoor focus from shooting to wet lines and flies.  There are a lot of fishing-themed brands out there, but one of the best and most unique is Pesca Muerta.  We’ve been Instagram BFFs for a while.  They are a fishing based outfit out of Winston Salem, NC that has a specific musical theme that is close to my heart.  I’ve had the pleasure of getting to know founder Ben Noland over the past few months…he’s exactly what you’d expect: a great guy.

It’s my pleasure to feature brands like these on Red Clay Soul.  Guys who love the sport, and create a brand around that, but it’s not all about the sport.  While the sport drives it, their brand is about a lifestyle.  It shows in the commitment to the designs and products.  Sure, you can find a t-shirt or trucker hat anywhere, but something as genuine is tough to come by.  Ben does it because he loves it.

It is way past time to have these guys on the blog.  Ben was nice enough to answer some questions about Pesca Muerta, as he tells the story much better than me.  I have a feeling you’ll be riding that train much sooner than later…

What is the history of Pesca Muerta?  Pesca Muerta is Spanish for “fishing dead” or “dead fish,” and the name has nothing to do with killing fish or anything like that. On the contrary, we are avid catch-and-release fly fishermen ourselves, and our brand is committed to supporting conservation and other like-minded organizations. We are a proud member of 1% For The Planet, and have partnered with many other organizations to promote responsible fishing practices and conservation of our precious fisheries.

Our brand name is a nod to one of our favorite bands, The Grateful Dead, who helped to inspire not only our logo but also our general operating premise – good tunes, good times, tight lines. Also, we thought “Pesca Muerta” sounded cool! 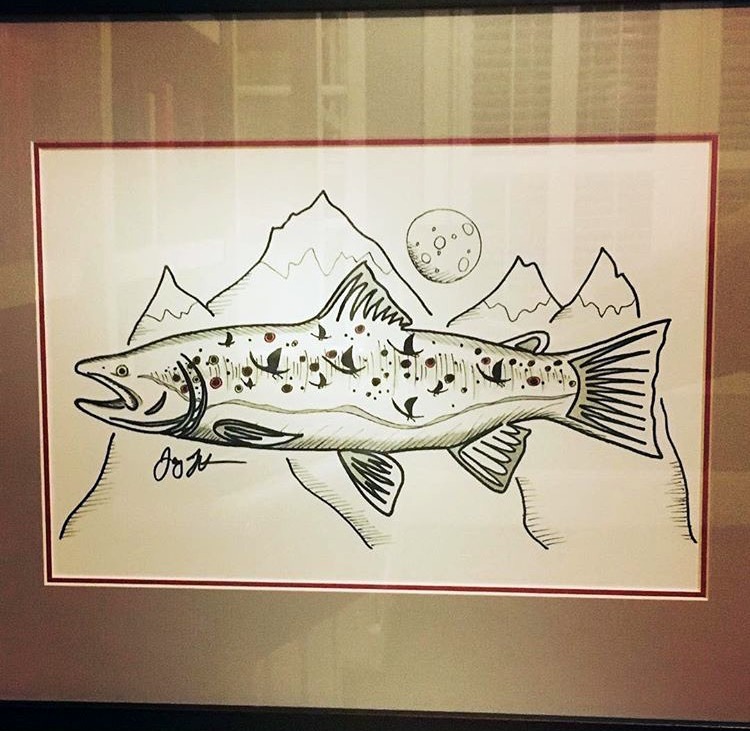 What made you want to start the company? I love good music, and I love to fish. Always have. In many ways, Pesca Muerta is just an extension of those two passions, a way to create clothing and accessories that embody and represent what we love to do. There are boatload of great fishing apparel companies out there, and lots of brands/apparel inspired by music, but we wanted to do both. In that way, I think we’ve got something really unique and special.

But if you’re looking for the “flux capacitor” moment, here goes – in July of 2015, my older brother and I made the pilgrimage to Chicago for the Fare Thee Well shows at Soldier Field. I was 13 when Jerry Garcia passed away, and so I never had the pleasure of seeing the Dead live, but have seen pretty much every incarnation/derivation/reputable Dead cover band since then. But this trip was special, it was different. There were so many people and the whole city was just humming with excitement, nostalgia, and love. At the same time, we were planning a fishing trip out West in a couple of months, and surrounded by all this Dead love, I thought, “wouldn’t it be cool to get a hat that combined these two loves of mine – fishing and the spirit of the Grateful Dead!” The idea seemed so obvious to me that I scoured the city for anything like this; merch was everywhere so I thought for sure I could find it. But I struck out. So, when I got home, I spent weeks searching the internet for something like it. Again, nothing. So, one night I got on my computer and I drew it myself!

Later that week, I took the design to an embroidery place in town and had them put it on a few ball caps and some shirts for that fishing trip we were going on. It was just meant to be for us, for fun. But in the airports, around town, at the put-ins, everywhere we went, everyone kept saying, “I love that logo, where did you get it?” When I got home, I formed the company and got busy designing and sourcing products. And the rest, as they say, is history…

Who is a Pesca Muerta customer? Anyone and everyone, really. But we’ve found that most of our customers love at least one of our brand ideals. For those folks that love great music like the Dead, and they love to fish? Well, that’s been a match made in heaven, obviously! But I want to stress that we are really trying to be a brand for everyone. That is why we have put so much time and careful work into designing and sourcing our products. When we make something, put our name on it, we want it to be the best *whatever it is* that you own. From our hats to our sun shirts, we want you to be drawn to the look and the style, but blown away by the comfort and quality of the product. At the end of the day, no matter how cool or good something looks, you’re never going to wear it if it’s not comfortable, if it doesn’t hold up to wear, if it’s not well-made. We feel good about what we’ve built, and we think everyone can Rep the Pesca. 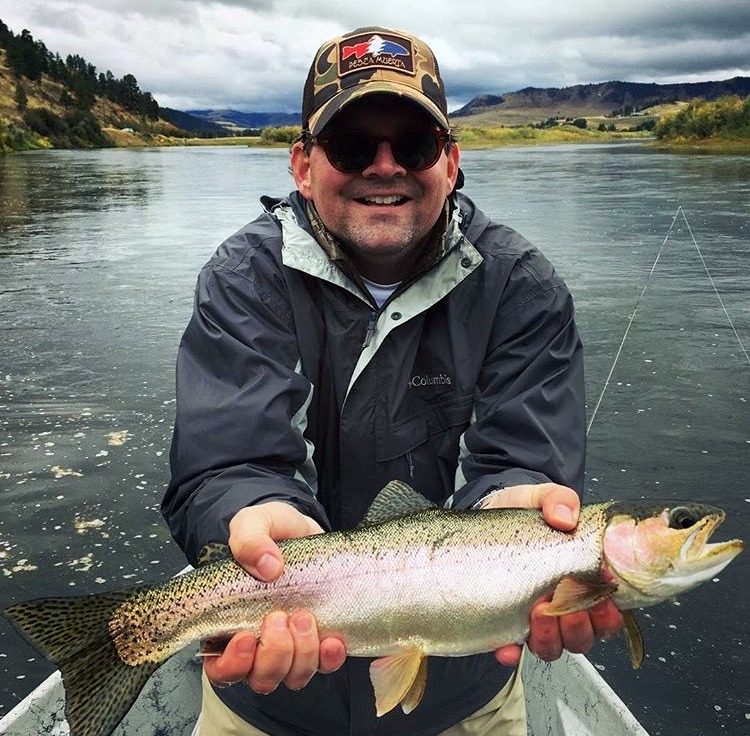 What do you see in the future for Pesca Muerta? We’re still so young and only just officially launched the brand in April 2016, so there is still a LOT to do. We have only scratched the surface in terms of retail sales in brick-and-mortar locations, and have largely built the brand through direct-to-consumer online sales and word of mouth. We are hoping to build and expand our network of retailers so that we can get Pesca Muerta out there in front of even more people, because we’re confident we have products that people will love, even if they don’t know it yet. And speaking of products, there are still a number of new product ideas and developments that we are constantly working on. I won’t divulge any secrets just yet, but I will say that we have some exciting things in the pipeline, and will assure you that whatever we do will continue to have an incredible attention to detail and quality. 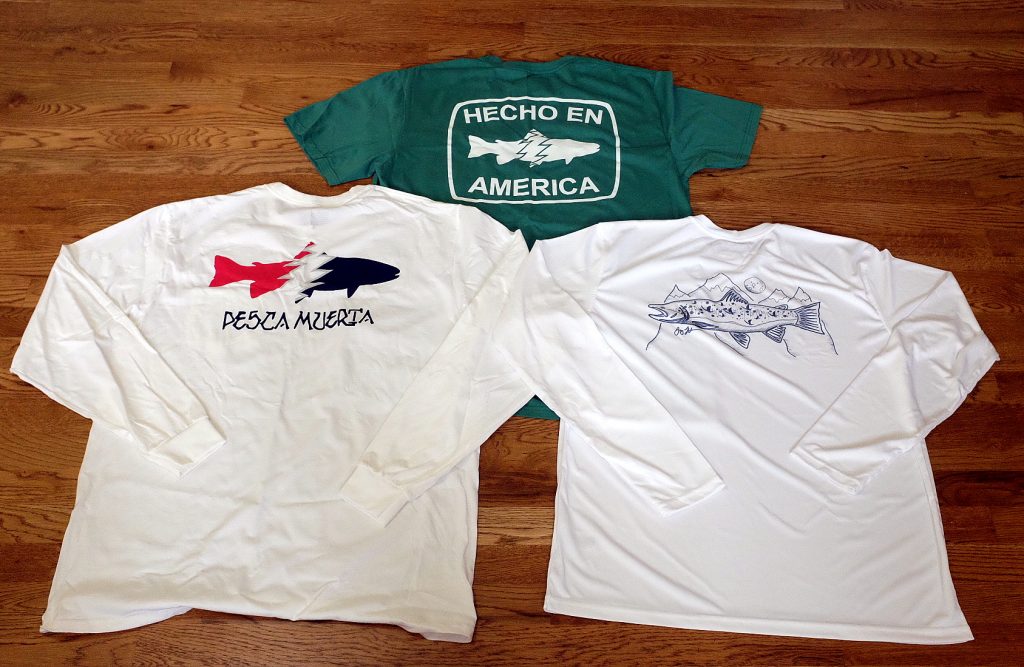 Where is your favorite place to fish? There are so many great places out there, but if I had to pick one, it would be the Paradise Valley of Montana. Not only is it home to the great Yellowstone River, but also boasts some of the best spring creeks I’ve ever had the pleasure of fishing. That’s also where Livingston, Montana is, and Livingston is such a cool town. Livingston and the surrounding area is where I first caught the fly fishing bug, and for that reason alone, I think it will always hold a special place in my heart. 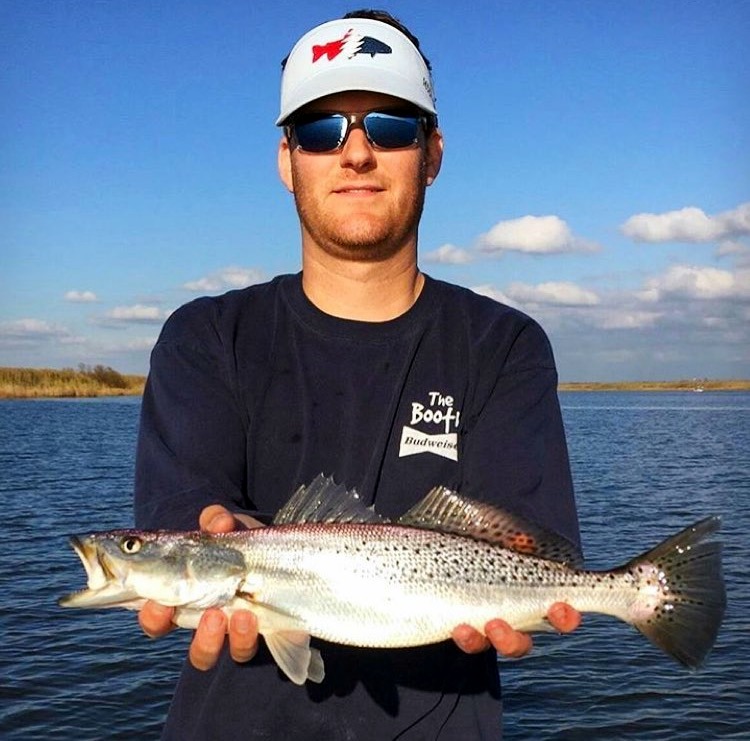 What’s your bucket list trip? Probably New Zealand. I’ve been lucky to fish all over the US, in the Caribbean, on the Yucatan Peninsula and in Patagonia, Argentina but have never been to NZ. Not only is the landscape breathtaking, but the fishing is supposed to be spectacular if you play your cards right. Sign me up! 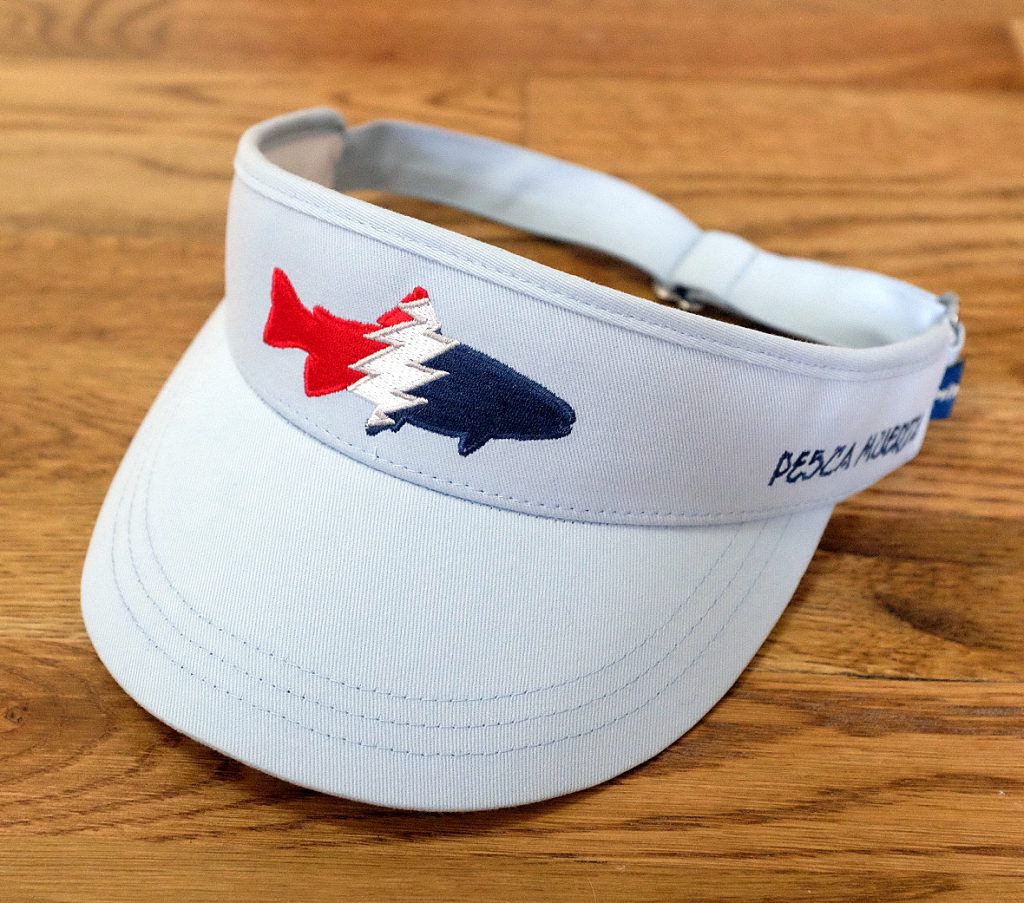 Live Dead, or Album Dead? That is a really tough question! I think my perspective might be different if I were older and I had the chance to see them live, but if I had to choose, I’d probably go with Album Dead. That is what I was raised on, and they are all so good! I love the jamming and improvisation of live Dead as much as the next guy, but the song writing and artistry is highlighted best by their studio recordings, I think. Also, Terrapin Station kinda changed my life, so there’s that too! 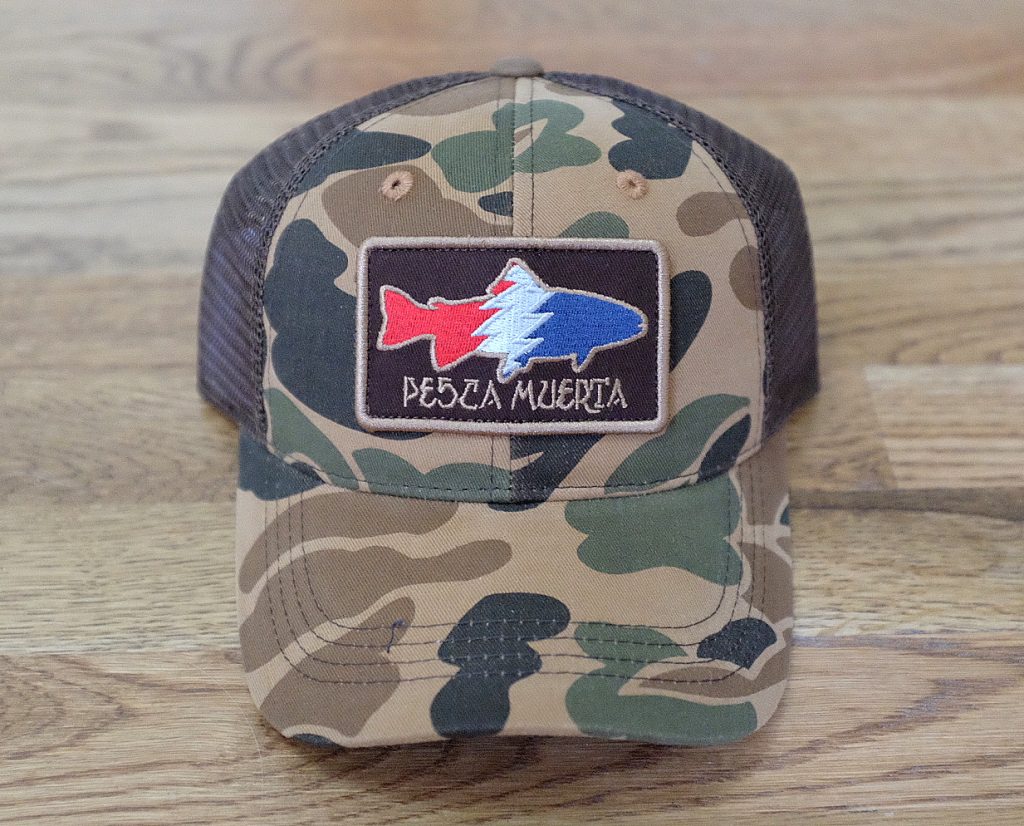 Visit Pesca Muerta online to get some goods…