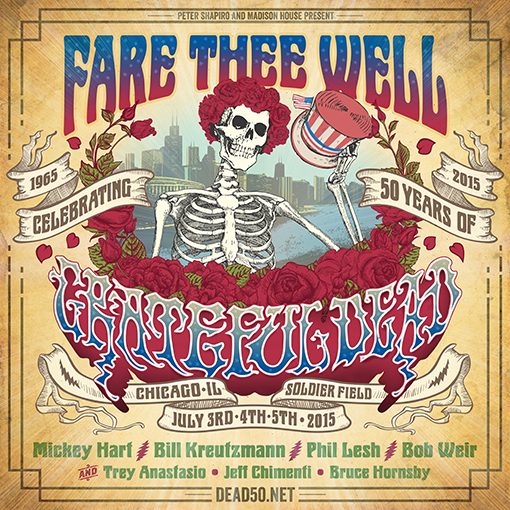 Well isn’t this just a real nice surprise…  Looks like I know what I’m doing to celebrate America’s independence…heading to Chicago to see the remaining members of the Grateful Dead in their Fare Thee Well shows.  Looks like Phish-man Trey Anastasio will do the fronting, which sounds like a good thing.  I’ve never been a hardcore Phish guy, but no doubt the talent is there.

It will be interesting to see how they do the shows…Dead shows typically aren’t a ‘festival of hits’, so the setlists could be fun.  Ticket prices don’t look too bad, either.  One of my biggest regrets is missing the Dead show at The Omni in 1995.  I still think about it.  I’m down with Chicago.  I’m serious.

So for some Saturday conversation…what’s your favorite Dead song?  Me: “China Cat Sunflower => I Know You Rider” from Europe ’72.  What’cha got?