The second review in our “Have You Seen” series, the classic “Red Dawn” from 1984.  Written by my man MM…you’ll want to read something this cherry: 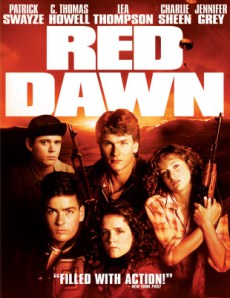 Bonus feature: At the end of this review are several discussion questions for you to use if you are in a movie club and want to do Red Dawn.

Oh my god, you guys. You have to see this movie. If you love to learn about how to defeat commie assholes in 1980’s Colorado, this is the movie for you.

Red Dawn is a movie about a bunch of high school kids who have to live in the woods and fight Russians after the commies try to take over America. The main guy in the movie is Patrick Swayze. If you recall, Patrick Swayze played Darry in another totally badass movie called The Outsiders. There are other way famous people in Red Dawn as well. Charlie Sheen is in it and so is C. Thomas Howell who, oh yeah, also happened to be in the Outsiders and was called Pony Boy in that movie. Charlie Sheen wasn’t in the Outsiders, but I really think he should have been. He would have been one of the rich kids if he were in it. If you aren’t familiar with The Outsiders (which what the hell is wrong with you?), C. Thomas also played that wierdo guy Monroe in the best sports movie ever, Sideout. The lady characters in Red Dawn are played by Jennifer Grey, the whiney girl from Dirty Dancing, and Leah Thompson who seems like she was in tons of other movies but I can’t think of any right now.

So what happens is that all the high school kids are in class learning about some dumb sh!t when a bunch of Russian parachute men land on the playground and start doing army stuff. The teacher is like “I’m in charge here, Russians, so you better tell me what’s going on”. The Russian guys laugh right in his face and then explode all of his organs with machine guns. The kids see this and are all like “Oh, f&%k! We gotta go live in the mountains.” So they all jump in a Ford Bronco and haul ass out of there. Before they leave town, they stop at the local sporting goods store to get guns and bows & arrows and many canned goods. So now they’re up in the mountains and Patrick Swayze says “Listen up, losers. Me and my brother Charlie Sheen have been in these mountains tons of times with our dad, so we’re in charge. If you don’t like it, then I’m going to fight you in and around this campfire that I built.” The only kid who doesn’t like it is this sniveling ass nerdy guy who is the class president. He voices his protest and then gets fought by Patrick Swayze right in front of the fire. Patrick wins so now the class president falls in line and works for Patrick and Charlie.

So all the kids are just hanging around in the woods eating canned food and being so sad because of the Russians. They also do hunting stuff and this one time C. Thomas Howell shoots a deer or an elk or a lion or something. Patrick and Charlie tell him that he has to drink the animal’s blood if he wants to be part of their hunting club. C. Thomas drinks the blood and tries to act tough about it, but you just know he’s worried that now he has Elk HIV or something.

Eventually, the group runs out of canned goods so they decide to go back into town to find out if it’s now Russia. They sneak into town and this one girl tells them that their dads have been taken to jail that is really just a fenced in area.

They guys head over to the fence jail and see their dad hanging out there and coughing a bunch. Alright, this part was so super sad that I can barely stand it. Their dad says that this is the last time they’ll see him because he is going to cough himself to death. Patrick and Charlie start crying and I totally cried with them. So powerful, you guys. C. Thomas also cries because his dad isn’t there. Seriously, this scene is not even a little bit chill. When everyone finishes crying, the kids leave and then go to this other guys house. The guy gives them some food and other stuff, but says that they also have to take his two granddaughters with them and they do. Guarantee that the first thing they thought about was trying to get naked with the teen girls.

So now they’re back in the mountains and everyone is really dirty, but somehow none of them ever grow any facial hair. This kind of sucks because surviving in the mountains pretty much means that you have to have a beard like all the time. Anyway, they’re doing all this survival stuff like killing animals and sleeping in sleeping bags. Then they start to get pissed and want to fight back against the Russian invaders. They start small by killing a few at a time, but then they get a taste for Russian blood and become like these totally badass mountain fighters. When they kill bad guys they always steal their stuff so eventually they have all kinds of guns and missiles and horses and other army stuff. They decide that they need a name for their survival team so they choose “Wolverines” because of high school football. The funniest part is when the Russian leader finds out that their name is Wolverines, he’s all like “What the f&%k is a wolverine?” Hah. Idiot!

One day when one of the girls is out hunting for Russian men to murder and rob, she stumbles upon this guy in a sleeping bag or parachute. She’s about to kill him because he doesn’t know the Capitol of Texas but he tells her to cut that sh!t out and that he’s an American pilot who was shot down from the sky. She takes him back to the camp and C. Thomas rolls up on him all tough like and the guy totally thinks that C. Thomas is so lame which he is. Anyway, now the pilot is friends with the Wolverines. He thinks it way sucks that they have to get up so early everyday to kill Russians but he does it anyway lest he get fought by Patrick Swayze in front of that fire. One day, Jennifer Grey gets a major crush on the pilot and wants to do it with him so badly, but I don’t know if they did or not because the movie doesn’t show it. They probably did, though, because you should have seen Jennifer go into heat when she was with the guy.
This other time, the Wolverines are hiding from a Russian tank that came to shoot them when C. Thomas Howell loses his sh!t and literally tries to fight the tank. This is a terrible idea and at one point the downed pilot guy gets shot or lanced or something. Anyway, he dies and oh my god, Jennifer Grey is so damn sad. It’s probably a good thing, though because eventually the pilot would have gone to jail if he ever did any sex stuff with her because he’s a full grown male adult.

At this point, the Russians are so pissed at the Wolverines for being the best at mountain fighting. So now the head Russian sends these gunships up into the mountains to hunt down the murderous teens. It ends up working pretty well because the Wolverines only have horses which don’t have any big Vulcan guns or missiles attached to them. Even if they did, though, how would they even have been able to aim them accurately? There were no computers or anything on the horses either. So Jennifer Grey gets killed by the Russian gunships, or it might have been Leah Thompson. C. Thomas also gets machine gunned which, I didn’t even care when that happened because he was kind of getting on my nerves anyway.

Now what happens is that the Wolverines are seriously short on teenagers to kill bad guys with. They decide that Patrick and Charlie will go into town and distract the Russians so that the others can get away into American territory. So the brothers head to town and start to BRING. THE. F&%KING. HEAT. Dirty Dozen style. They’re just smoking bad guys left and right with their guns and hand grenades. At one point they throw like 50 grenades at just two guys. This is way violent and is also a great way to send the message that you don’t even care how many of your weapons you have to use on a couple of commies. So, Patrick and Charlie are legit in it to win it. There’s just pandemonium everywhere as the Russians apparently are inept as f&%k (see: Afganistan circa 1983). Finally, Patrick and Charlie hide behind artillery guns on a train, but the head Russian guy who is Aztec or some other kind of Latin guy sees them and says that it’s time for a f&%king showdown. Patrick sneaks up behind him and says something way badass so the Latin guy spins around and they both shoot at the same time. They’re like ten feet apart so I don’t know why their organs aren’t blown all over the place when they get hit but whatever. Finally the Russian/Latin guy dies and Patrick has that same exhausted look on his face that he had when he tore that guy’s larnyx out in Roadhouse.

Now we see that the other teens have made their way to American territory and they are way grateful that Patrick and Charlie Rambo’d all those Russians to death. We never hear what happened to the brothers. I’m guessing that they just started going town to town beating the sh!t out of Russians until there were no more left. The end of the movie shows that there is now a plaque honoring the Wolverine teens for their survival and murder skills.

So, as you can tell, Red Dawn is so damn good. What makes it the best is that Patrick Swayze is just every kind of tough and is really the reason that America won the Cold War. When you watch this movie, though, you might want to skip past that way sad scene at the fence jail because you will cry and then feel sad too.

In case you’re in a movie club and want to analyze Red Dawn, here are a few discussion starters: