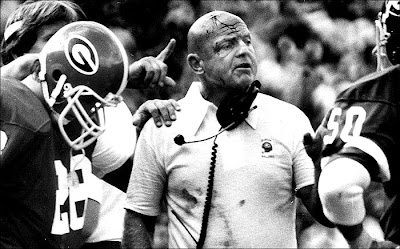 To honor the start of the College Football season, here is a letter from the legendary Erk Russell – arguable the best defensive coach in Georgia’s history – dated July 7, 1980: 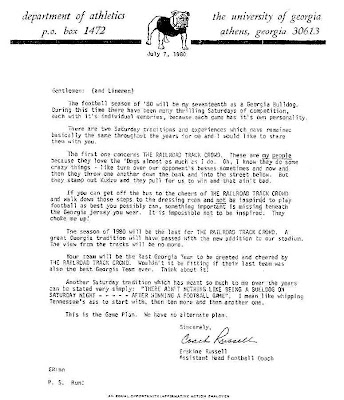 Gentlemen: (and Linemen)
The football season of ’80 will be my seventeenth as a Georgia Bulldog. During this time there have been many thrilling Saturdays of competition, each with it’s individual memories, because each game has it’s own personality.
There are two Saturday traditions and experiences which have remained basically the same throughout the years for me and I would like to share them with you.
The first one concerns THE RAILROAD TRACK CROWD. These are my people because they love the ‘Dogs almost as much as I do. Oh, I know they do some crazy things – like turn over opponent’s busses sometimes and now and then they throw one another down the bank and into the street below. But they stamp out Kudzu and they pull for us to win and that ain’t bad.
If you can get off the bus to the cheers of THE RAILROAD TRACK CROWD and walk down those steps to the dressing room and not be inspired to play football as best you possibly can, something important is missing beneath the Georgia jersey you wear. It is impossible not to be inspired. They choke me up.
The season of 1980 will be the last for THE RAILROAD TRACK CROWD. A great Georgia tradition will have passed with the new addition to our stadium. The view from the tracks will be no more.
Your team will be the last Georgia Team to be greeted and cheered by THE RAILROAD TRACK CROWD. Wouldn’t it be fitting if their last team was also the best Georgia Team ever? Think about it!
Another Saturday tradition which has meant so much to me over the years can be stated very simply: “THERE AIN’T NOTHING LIKE BEING A BULLDOG ON SATURDAY NIGHT – – – – – AFTER WINNING A FOOTBALL GAME”, I mean like whipping Tennessee’s ass to start with, then ten more and then another one.
This is the Game Plan. We have no alternate plan.
Sincerely,
(sig) Coach Russell
Erskine Russell
Assistant Head Football Coach
P.S. Run! 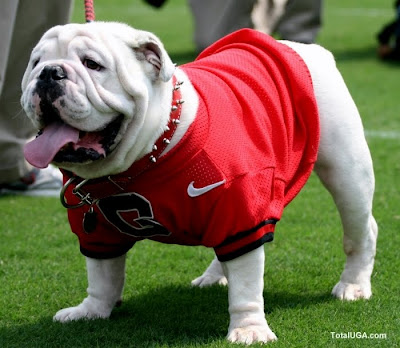 That season, the Georgia Bulldogs went 12-0 and defeated Notre Dame 17-10 for the National Championship.
What’s that coming down the track?
Images: Google Image Search