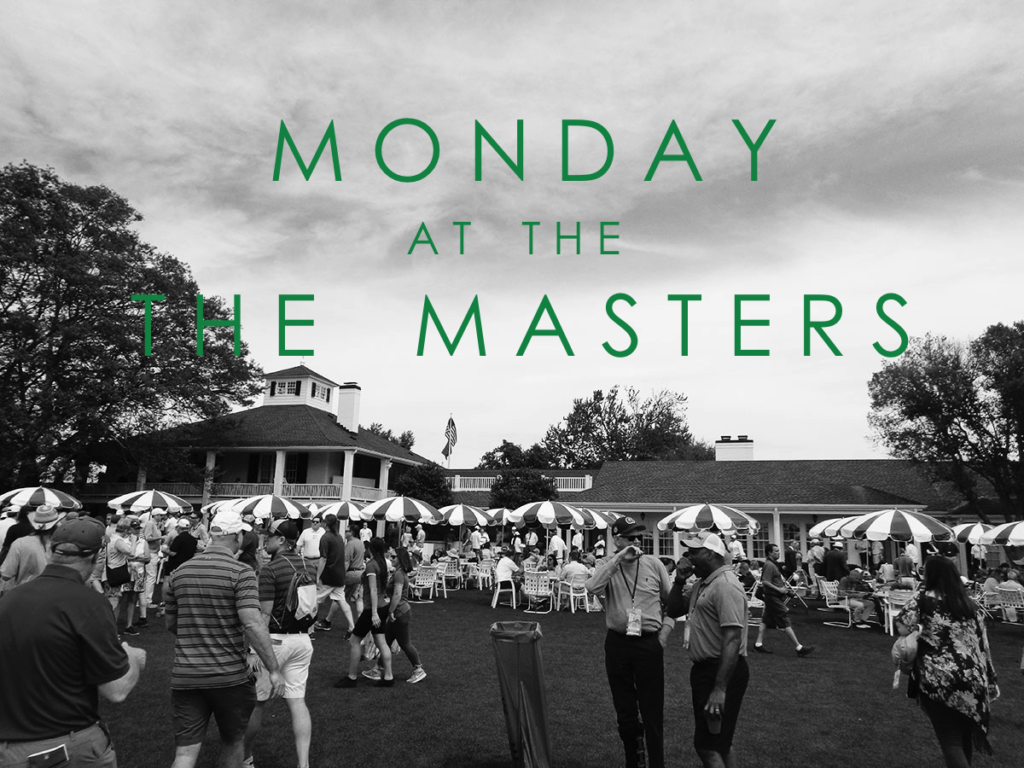 My annual pilgrimage down to Augusta National happened on Monday, and it’s hard to say that it wasn’t perfect.  Mrs. RCS had to bail since HJS had a bit of a fever, so I brought a good buddy who was more than happy to take her spot.  She was missed, but we had a great time.  Last year the Monday weather was really crappy: cold and rainy.  This year, we were blessed with high seventies and sunny.  Again: perfect.

There is something about this years’ Masters.  That something is Tiger’s return.  I’ve got a piece on Tiger coming later this week, so I won’t spoil it in this post.  What I will talk about is my experience, and my loot! 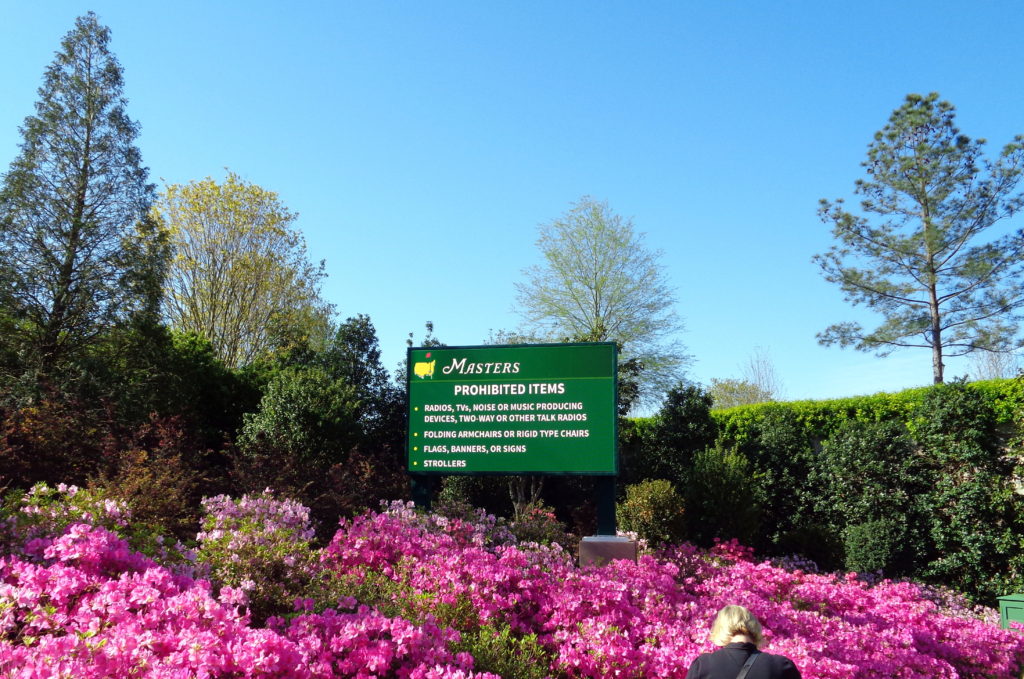 We made our way in, sans iPhone.  I resurrected an old Sony Cybershot so I could document the day.  Remember: cameras are allowed during the practice rounds, but prohibited during the tournament rounds.  iPhones and the like are not allowed.  Ever.  Don’t try.  It’s ugly. 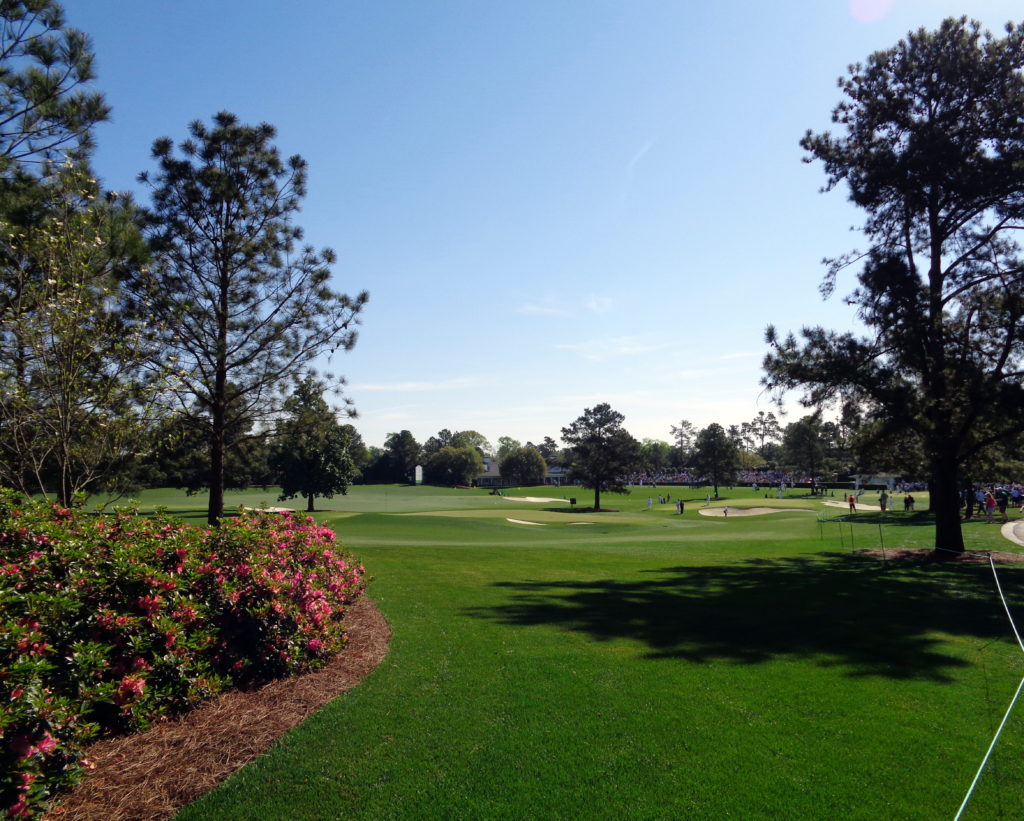 There was a lot of anticipation around the new Golf Shop at the North Gate (next to the driving range).  We parked in Augusta at 9:45, and were inside the gates at 10.  As soon as we passed the Media Tent, I saw an unusually large gathering of patrons.  I knew exactly what was going on: the line was literally 200+ yards long.  Absolutely insane.  The rumor was the wait was over an hour. 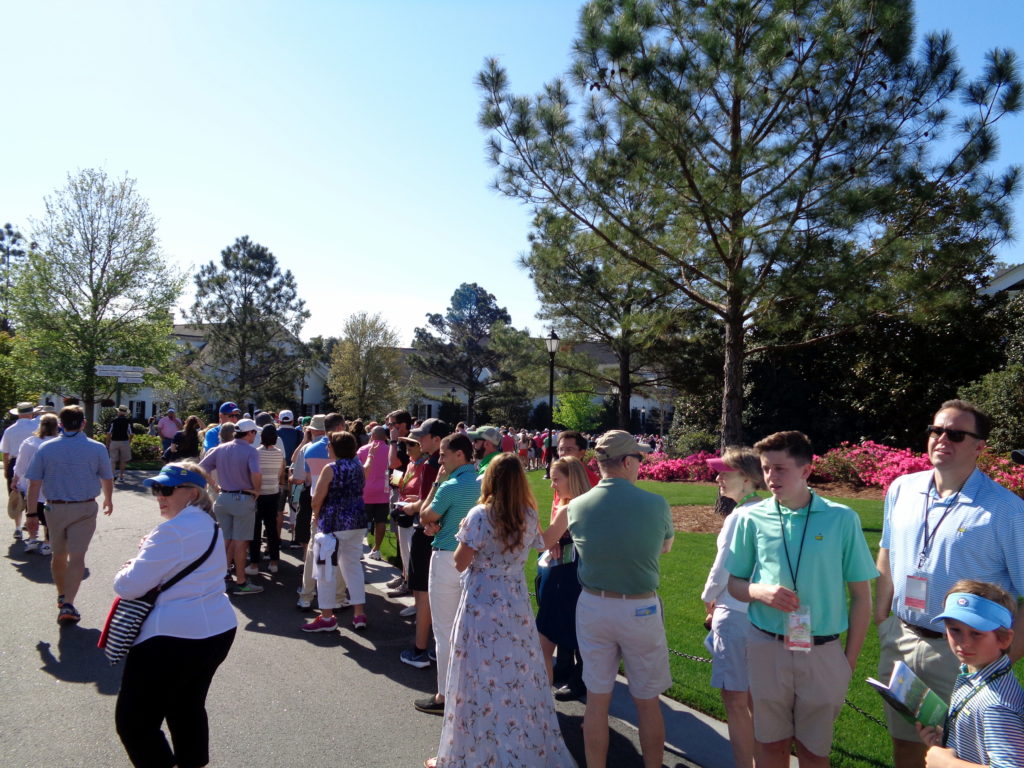 I can tell you that I did NOT see the inside of the building, but I did see the outside: 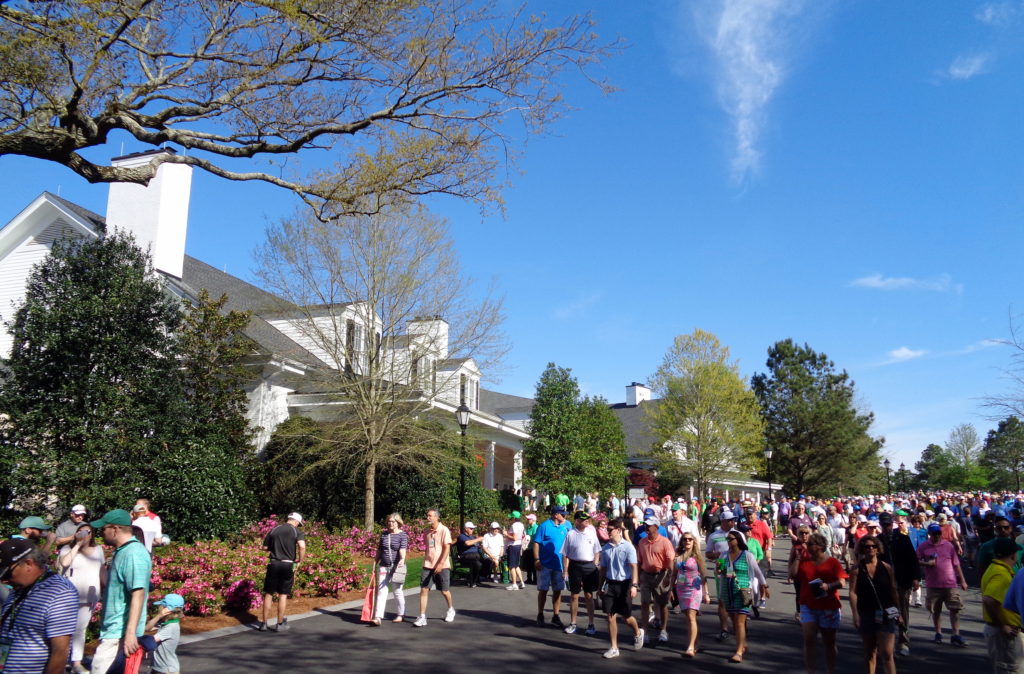 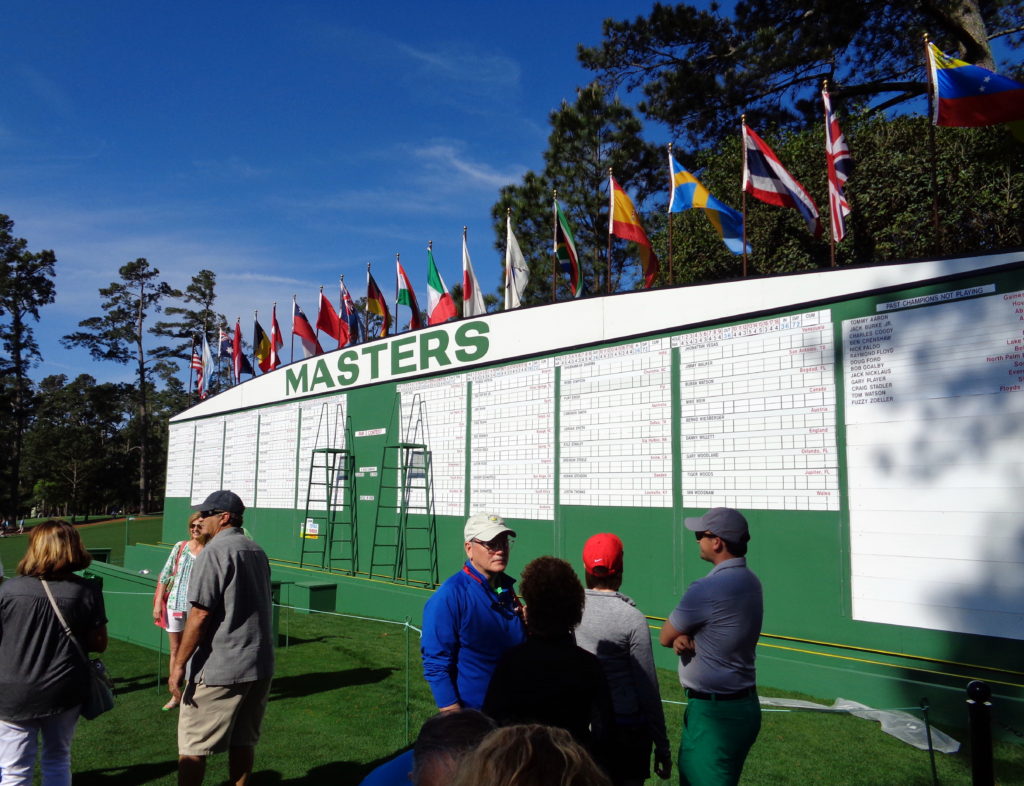 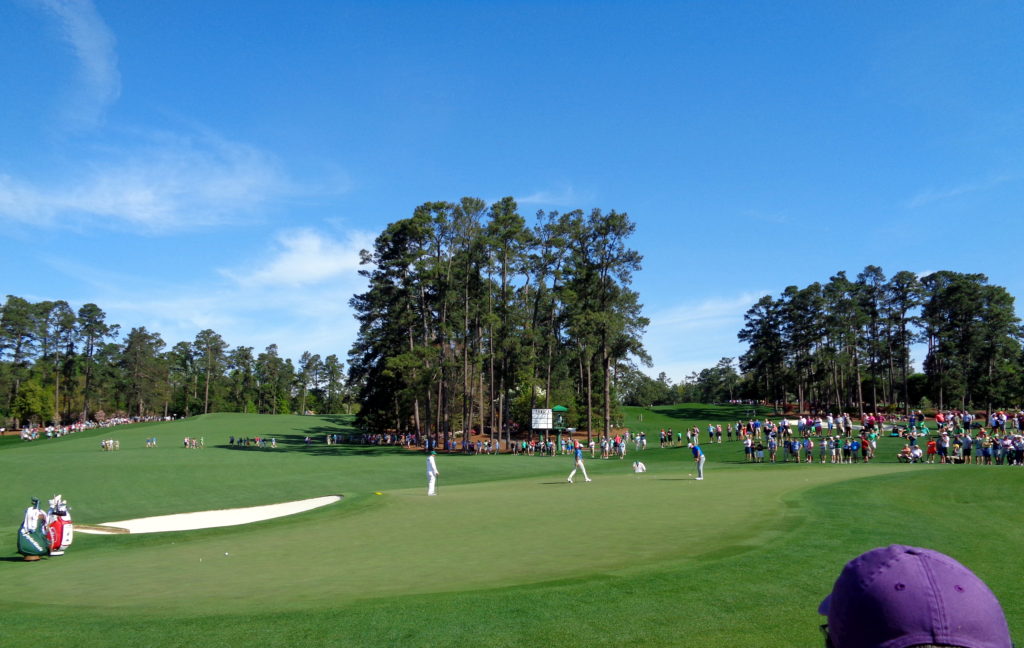 #7 approach.  You have to hit this shot a mile high and stick it on an elevated green surrounded by bunkers.  Golf is fun: 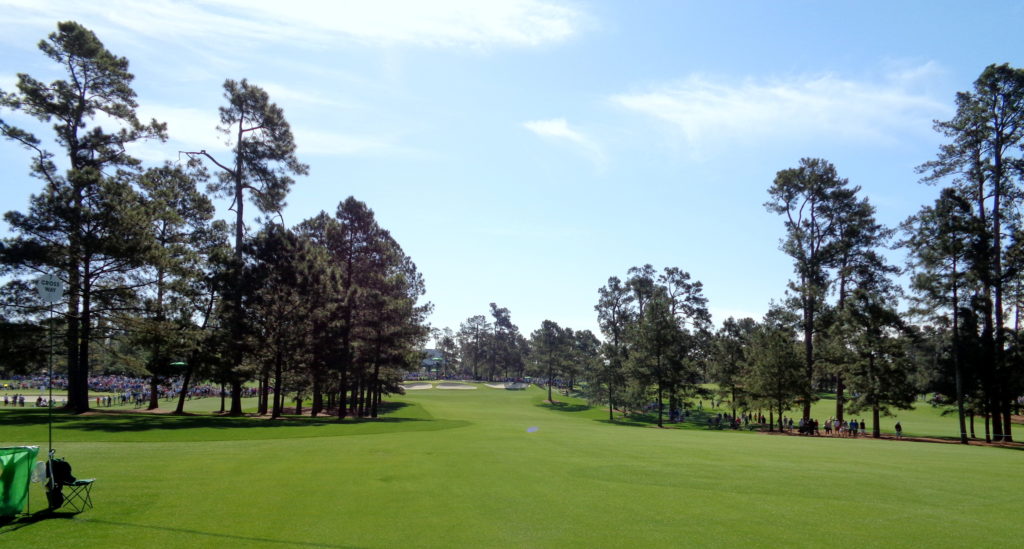 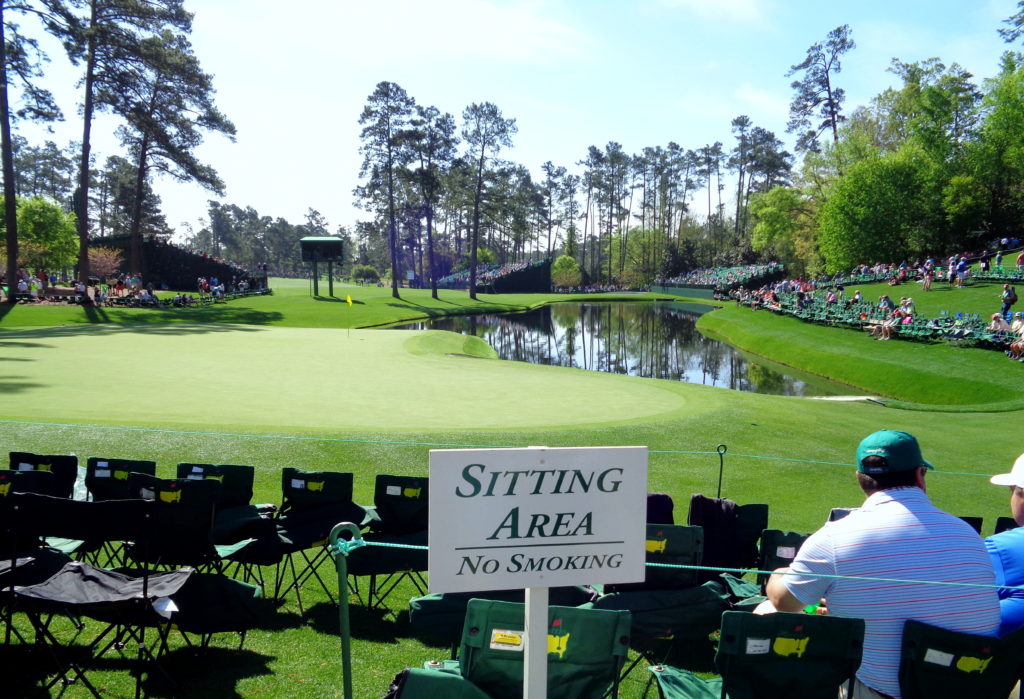 We made our way through the course towards 16, and then up the hill, where we waited in line for approximately six minutes to enter. 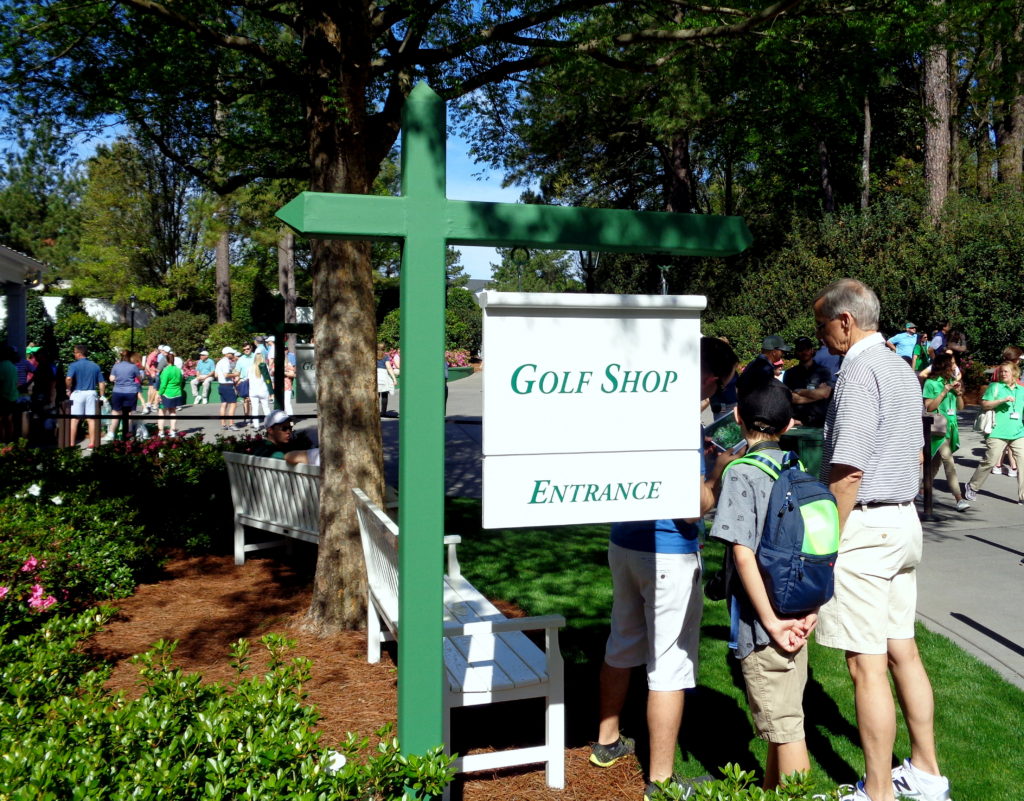 The merch was good this year.  Not great, but good.  Nothing new that really blew my hair back.  As usual, the shirts are all nice: 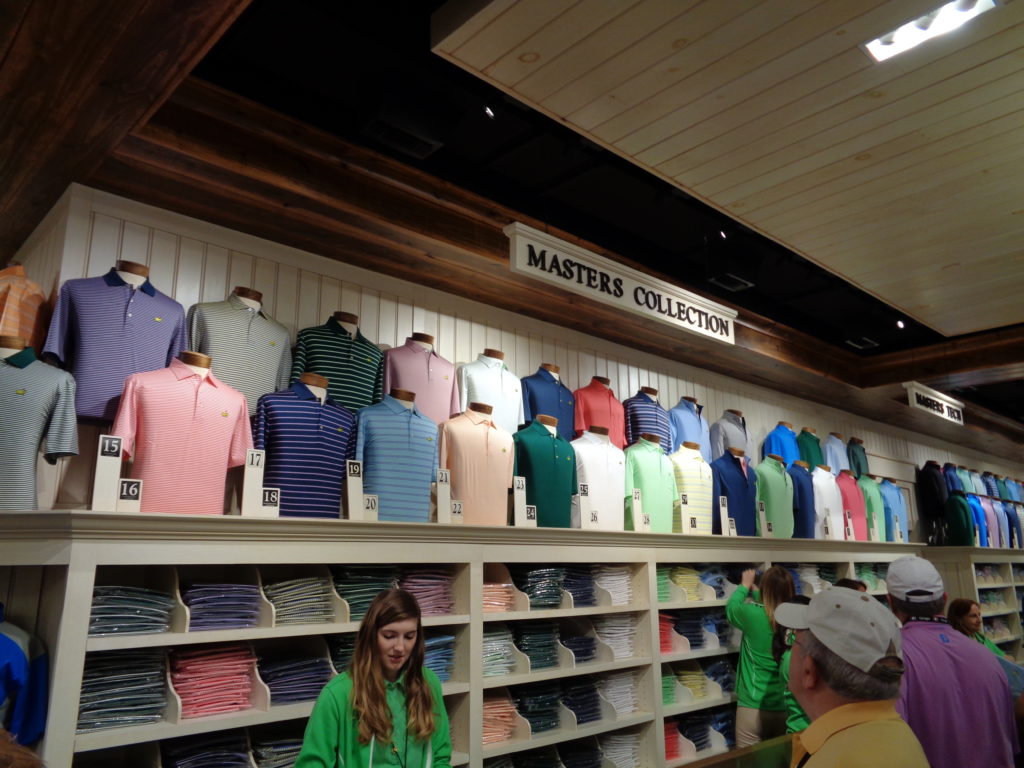 The hats are good.  Nothing really new other than a lot of technical fabric, and some retro looking hats from the new ‘1934 Collection’ (which looks a lot like the Berkman’s stuff): 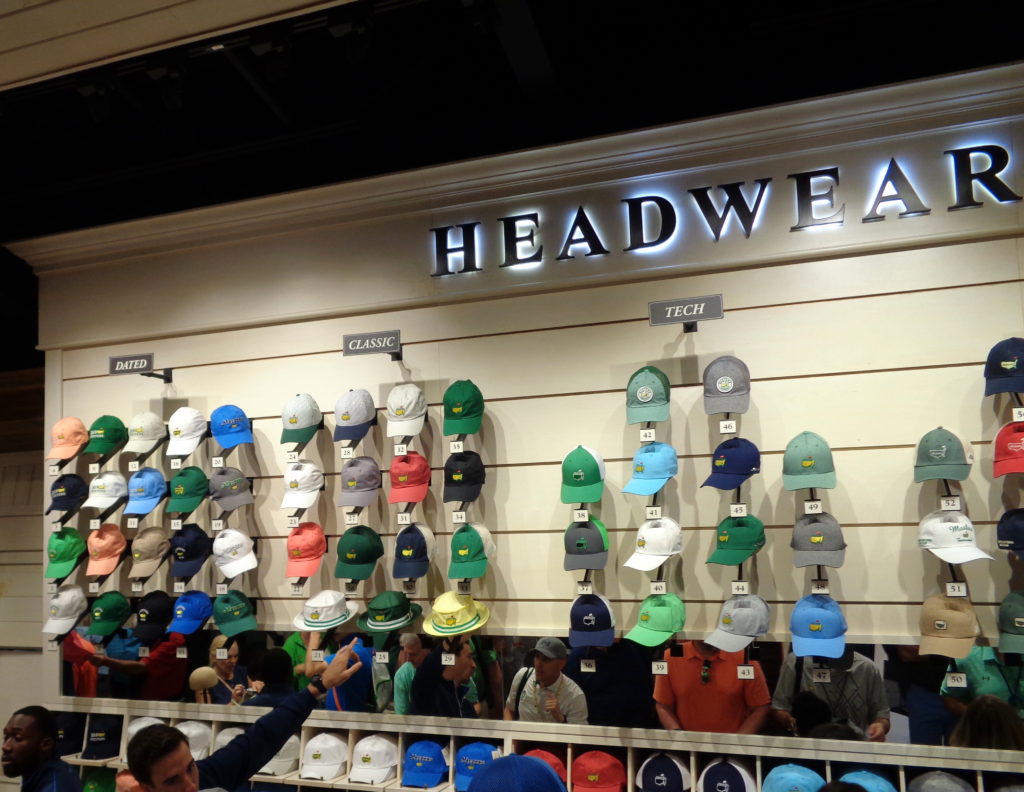 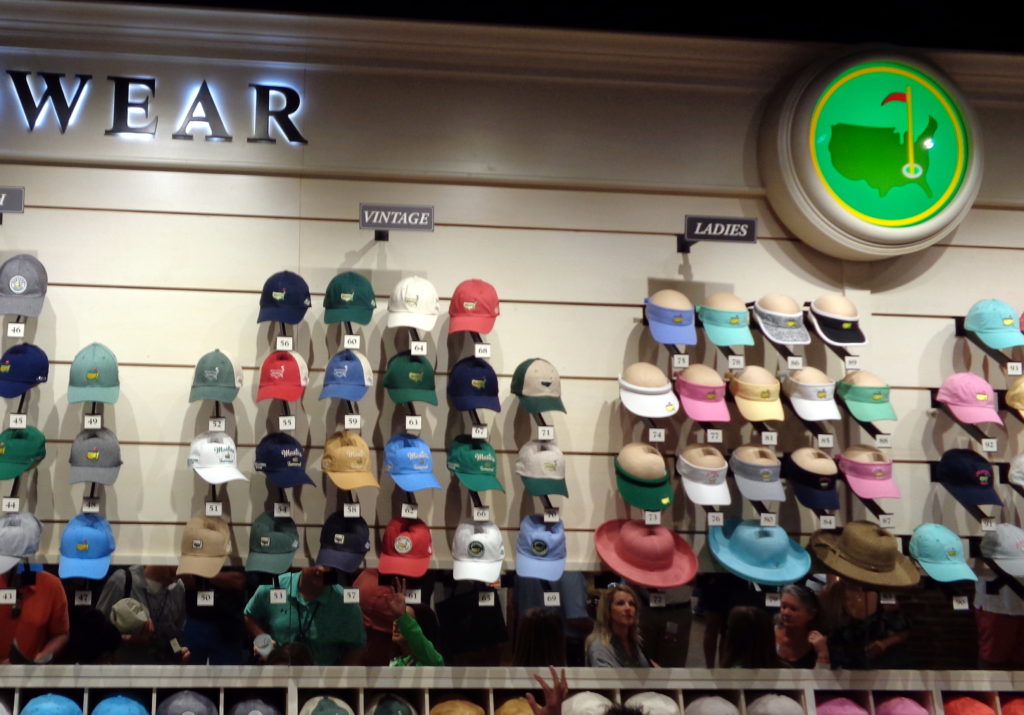 I saw a few folks walking around with Masters Tilley hats, which is a great idea.  I didn’t see them in the back Golf Shop, but really like the idea. 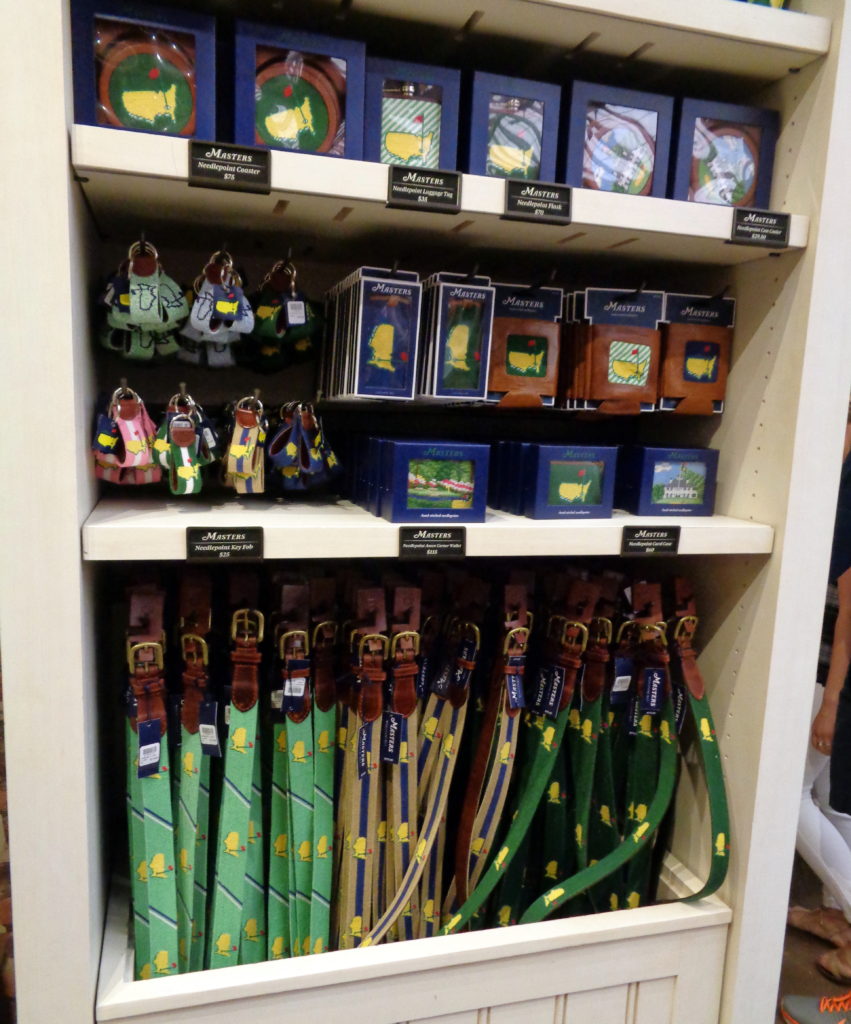 Smathers and Branson continue to do good work. The new belt, coasters, and Amen Corner wallet are cool: 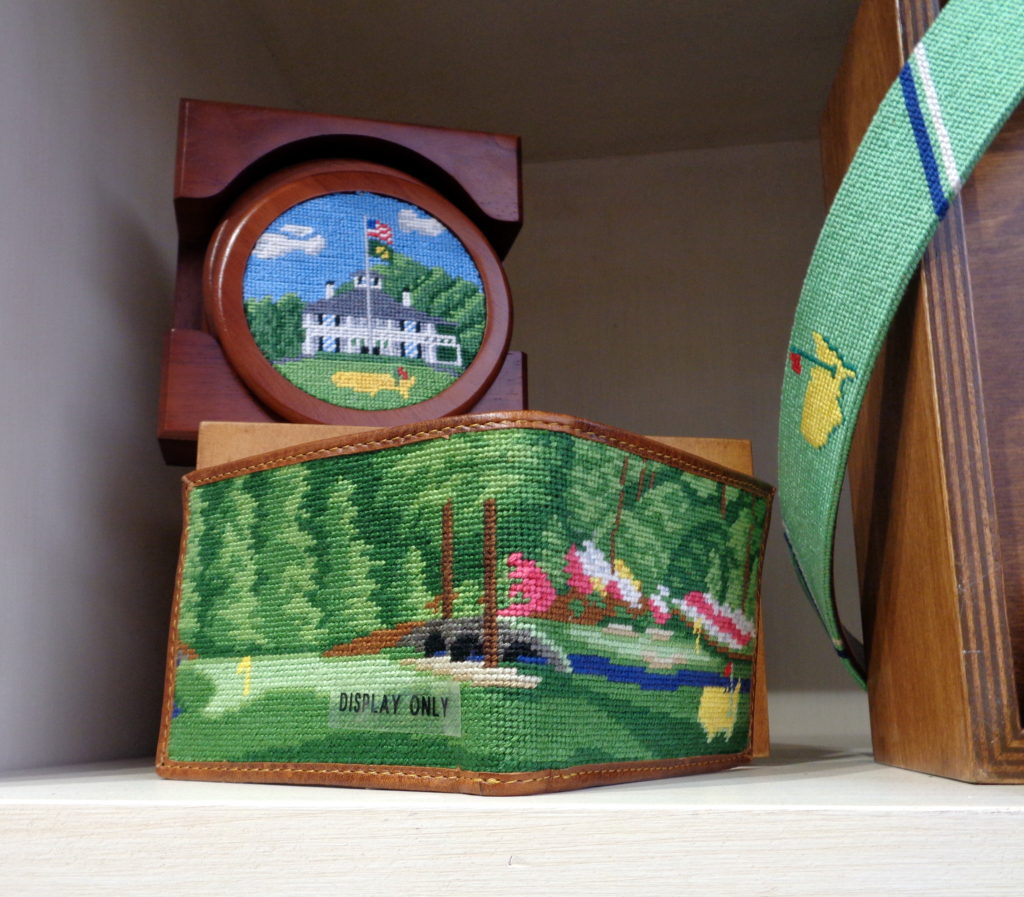 I snagged this Navy vest last year, and wore it quite a bit.  This year they added light grey.  REALLY great deal: 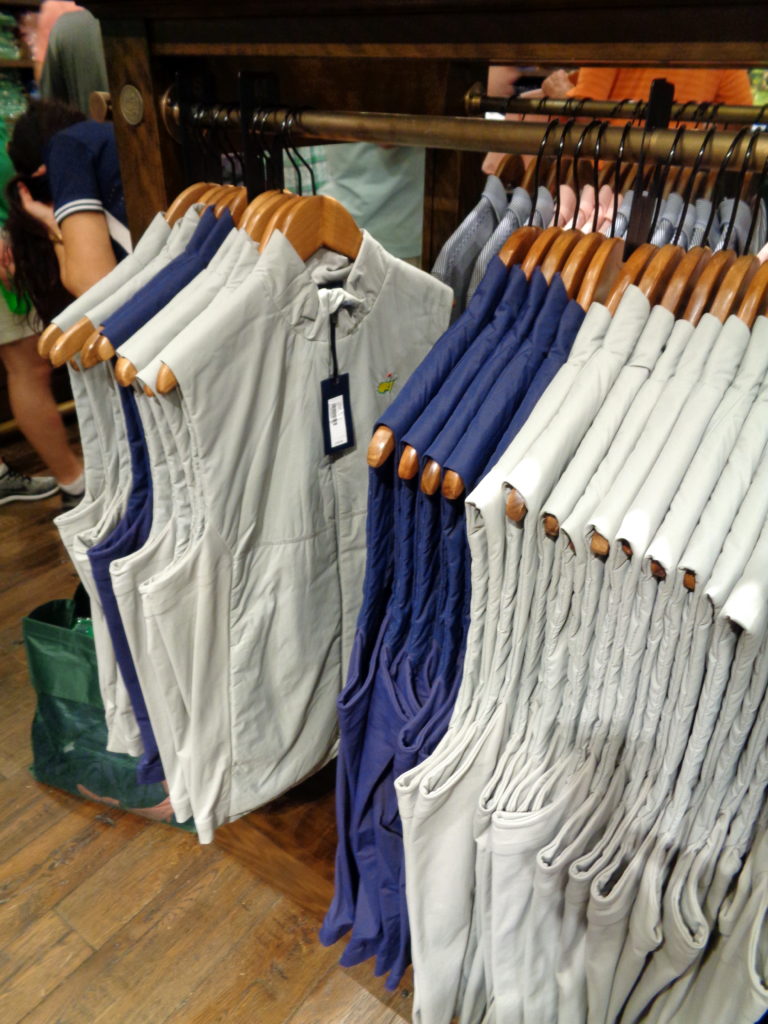 After merch-ing out, we headed over to the concession stand to grab a few sandwiches and a few beers.  I always grin at how inexpensive the food is: you can order one of everything on the menu for $56.50.  The same order would cost over $1000 at the old Turner Field, and the food wouldn’t be half as good.  I really like my annual convincing that the Bar-B-Que sandwich is the unsung hero of the concessions tent. 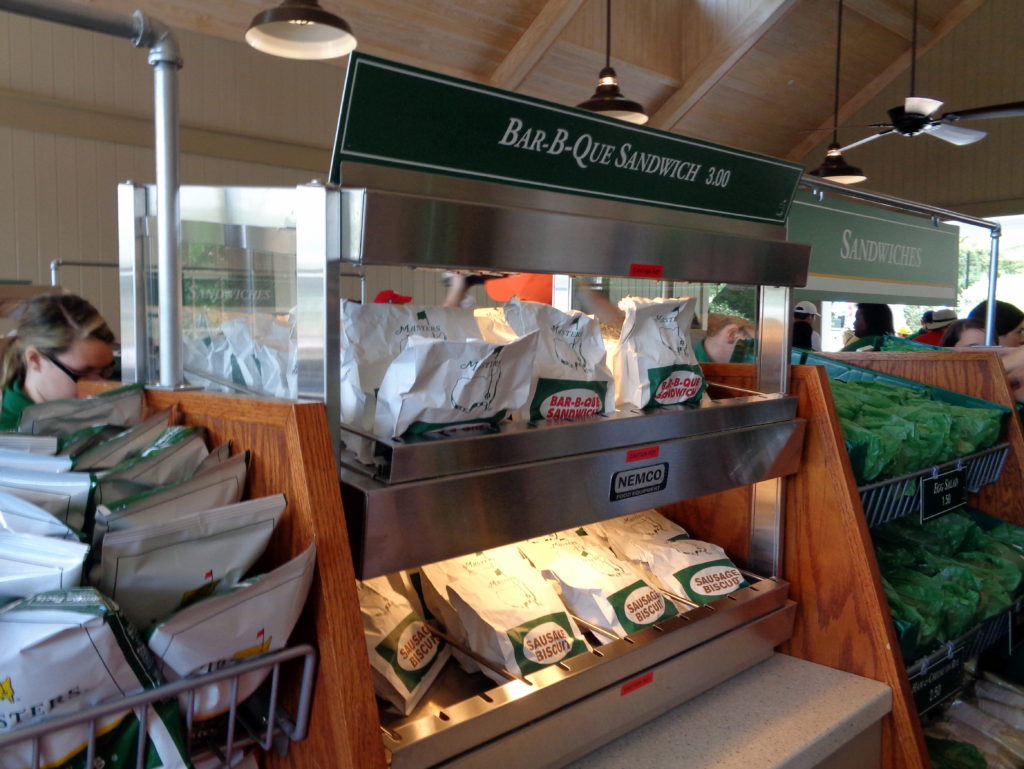 I never miss Amen Corner.  It is one of the most moving and beautiful spots on the planet.  And good news this year: the azaleas are in full bloom.  It is a sight to behold: 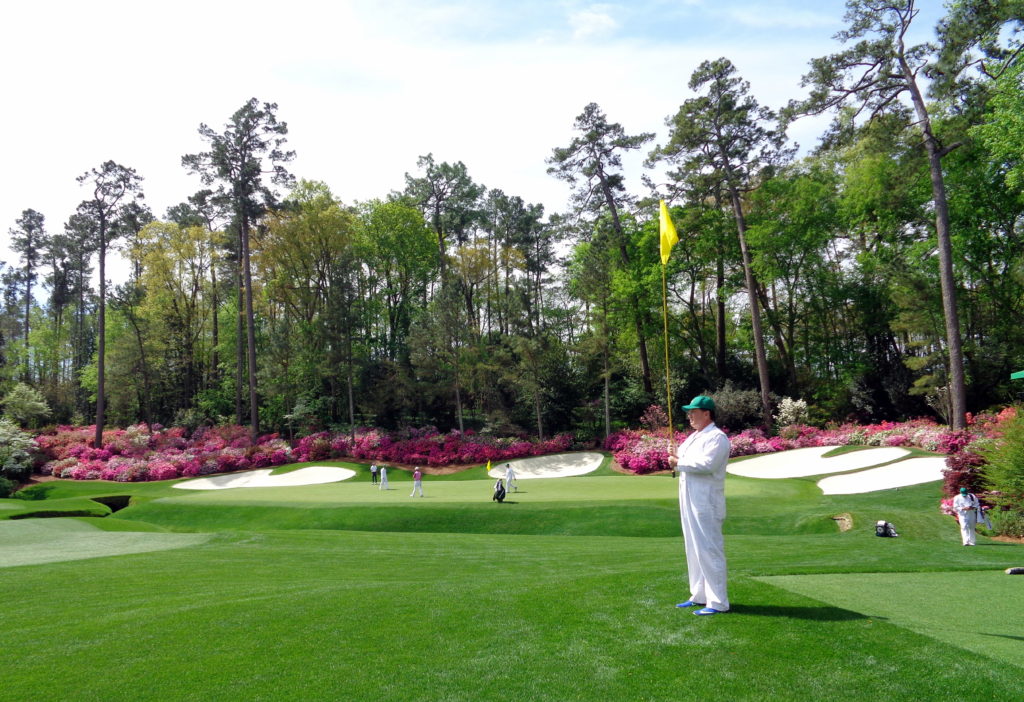 Our timing was good: Rory was putting on 13, and we hung around to watch him tee off on 14: 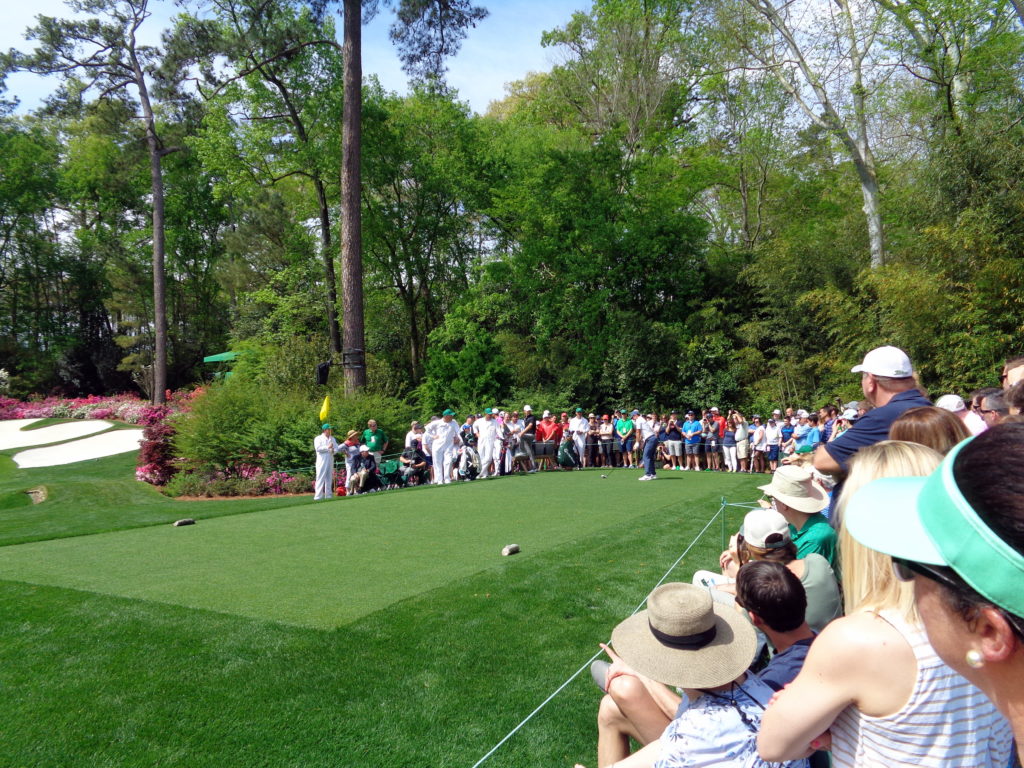 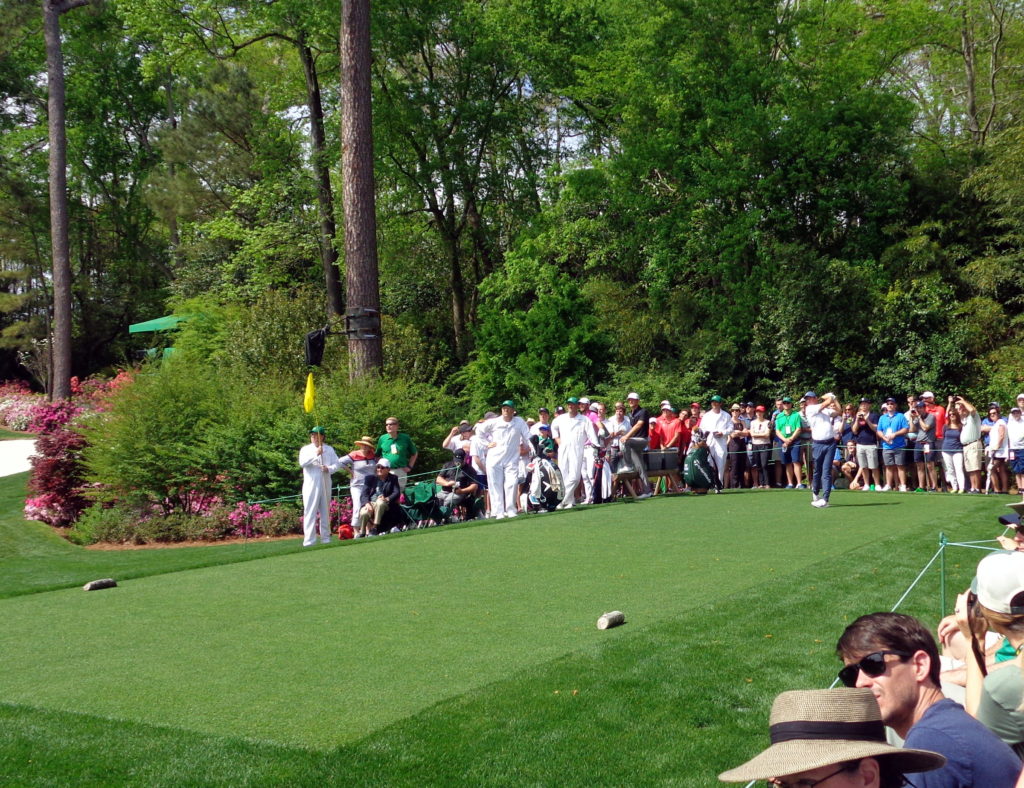 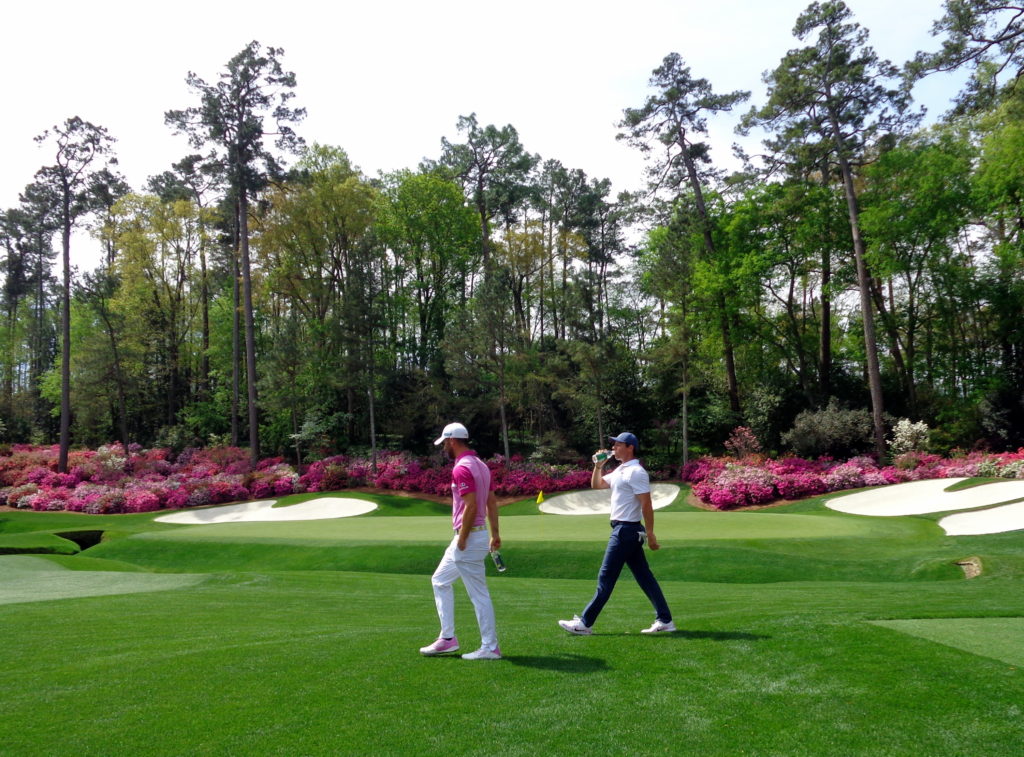 He looks good and hydrated.  He’ll probably contend this week.  I think he has the game to win a Green Jacket. 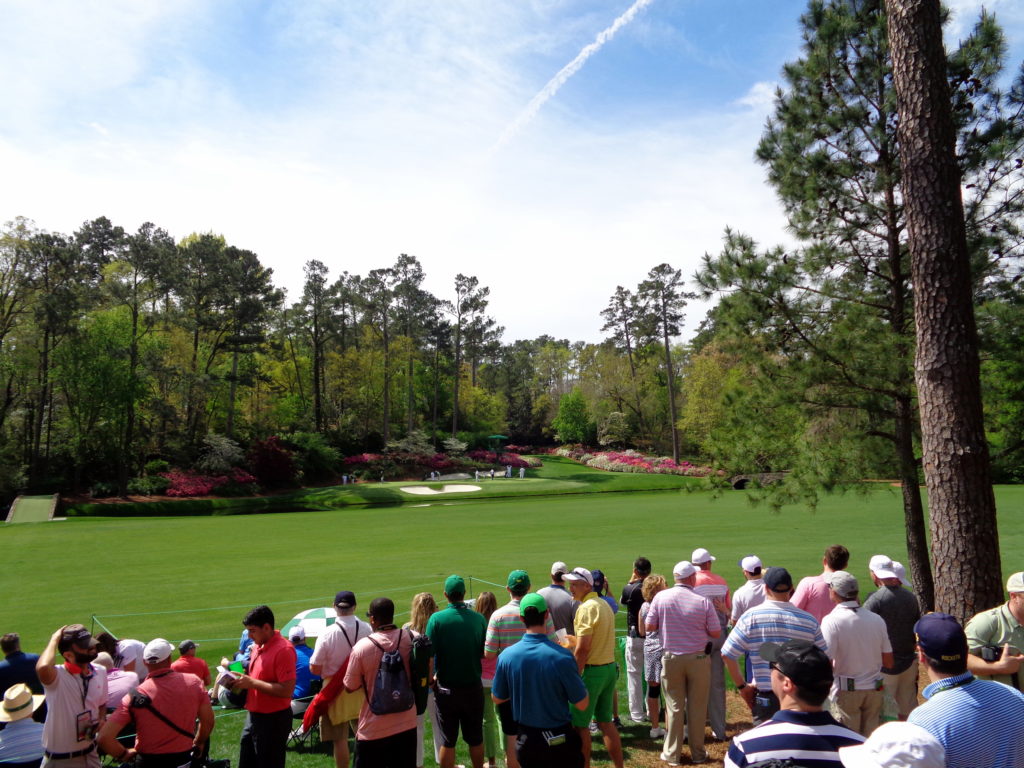 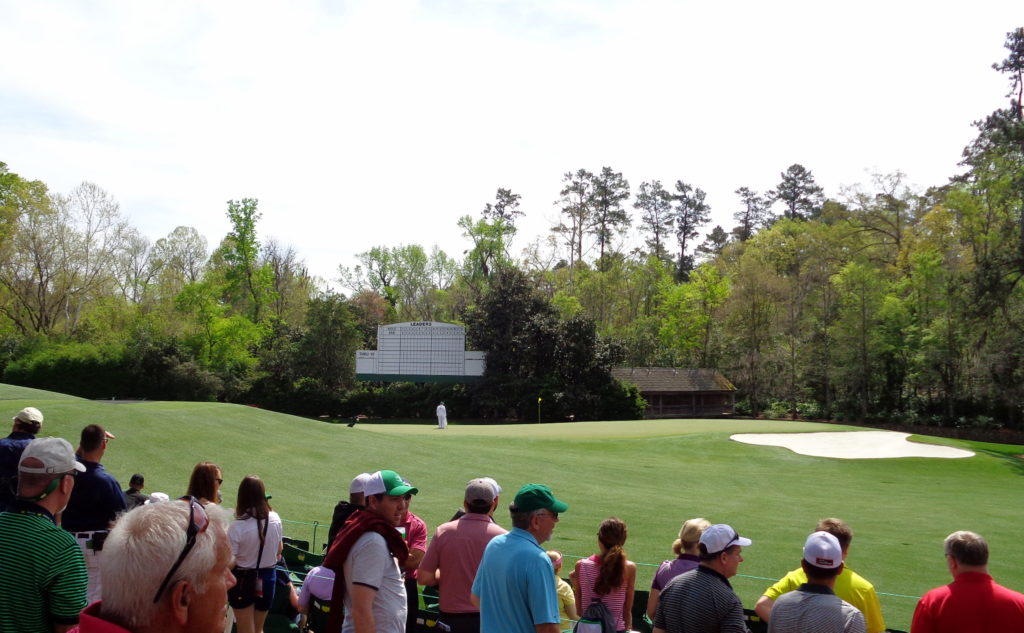 We continued through the course, eventually making it to #9 green.  A stark reminder that the TV cameras can’t show how tough these greens are: 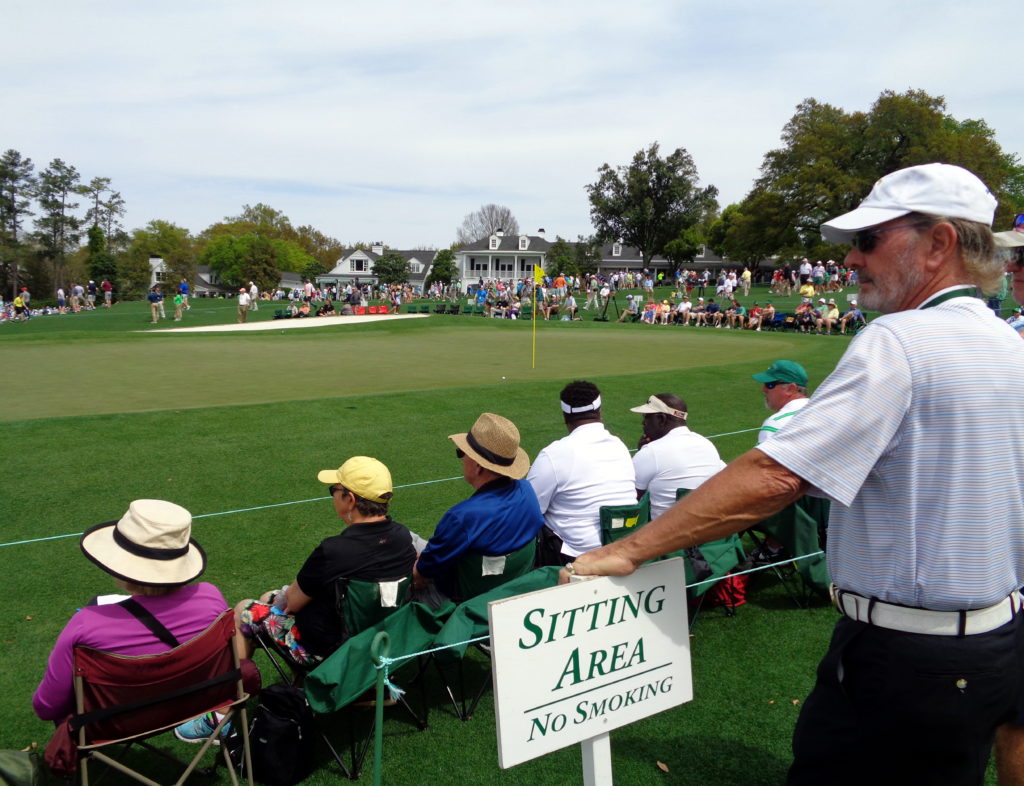 This guy was asked to leave because of his XL white belt.

We did some people watching and member spotting around the practice green and the back patio.  Plenty of movers and shakers ’round these parts… 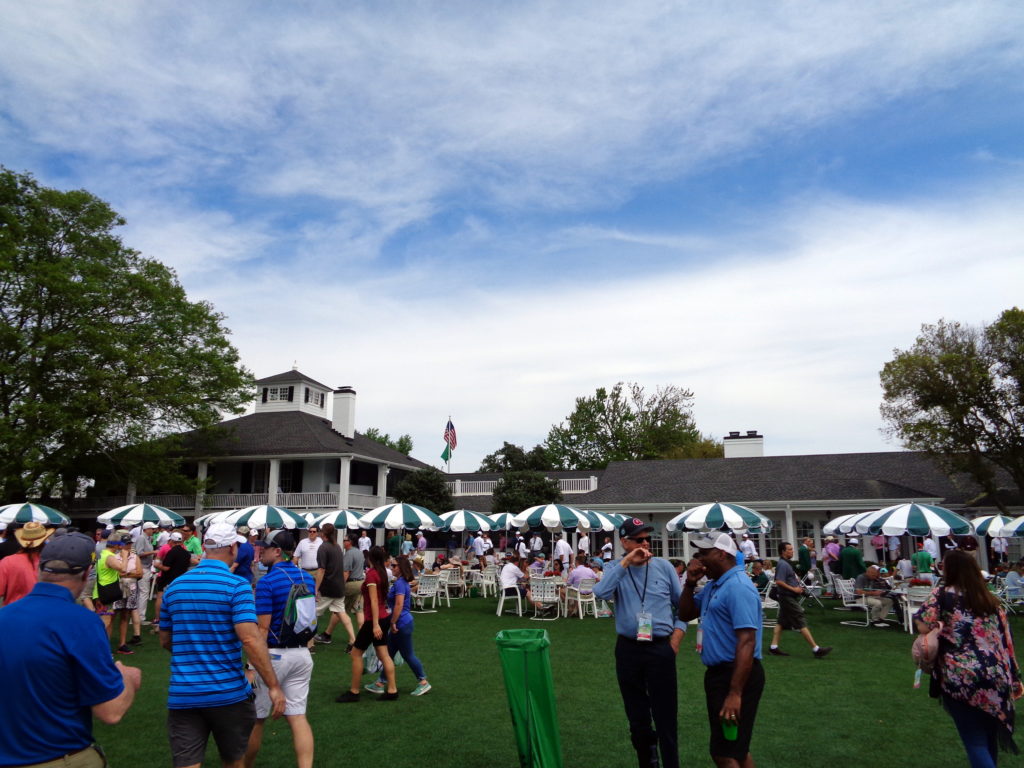 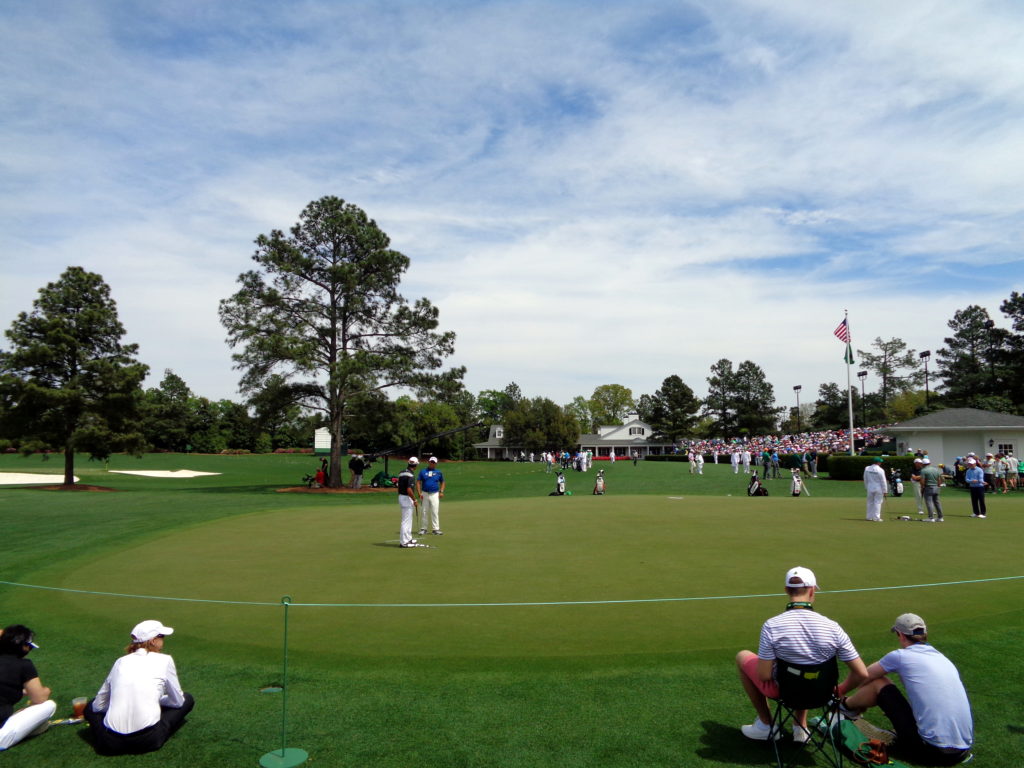 Finally, my loot.  I didn’t include the obscene amount of baby stuff I got for HJS.  You’ll see it all via RCS Instagram throughout the Summer.  This year, I was pretty tame: 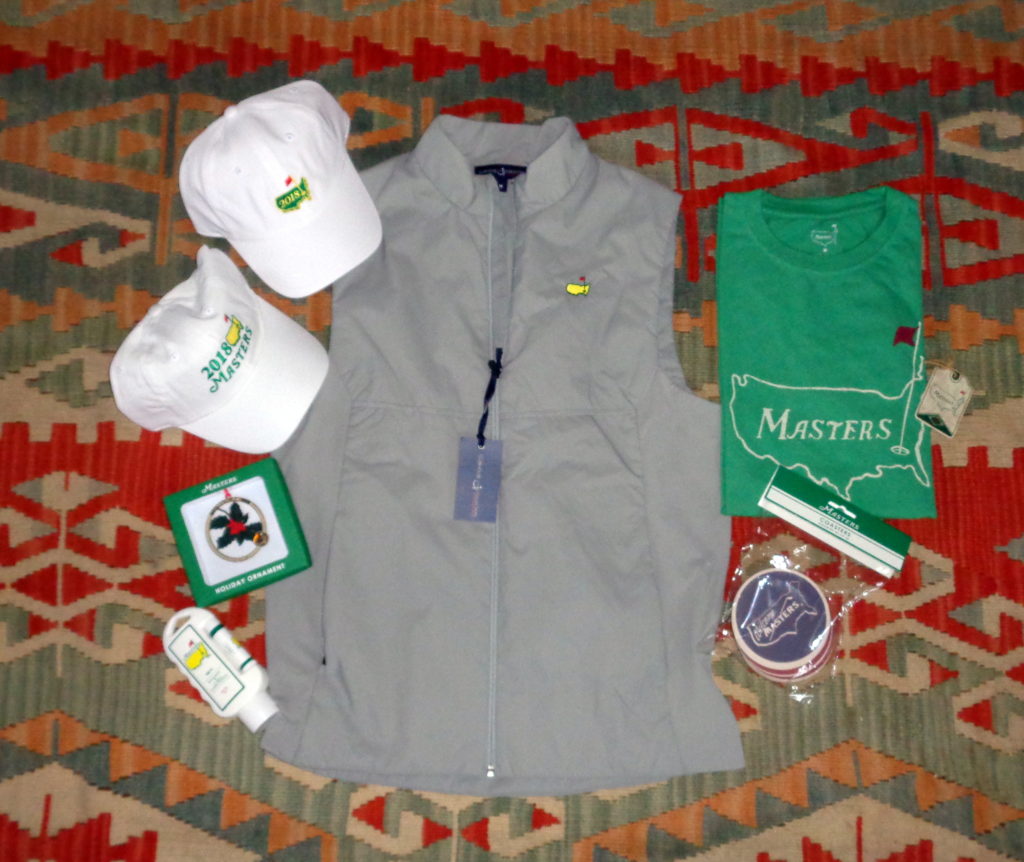 We always get an ornament and a dated hat.  I went with the old school white cotton 2018 hat, and the new tech hat with the green Masters logo.  The sunscreen was an impulse purchase, and put to good use.  I did pull the trigger on the grey vest.  I absolutely love it. 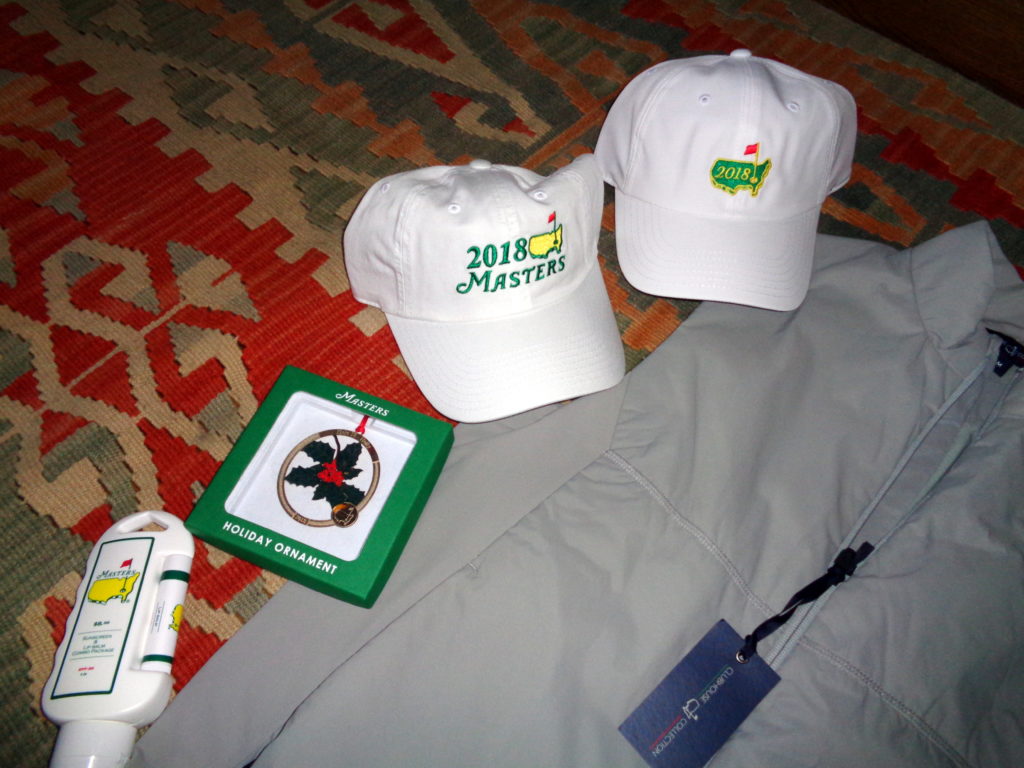 I skipped the polos and pullovers this year, and grabbed a simple t-shirt from the 1934 Collection, and a pack of 20 cardboard coasters.  We use these all over the house, so these were a good buy for us. 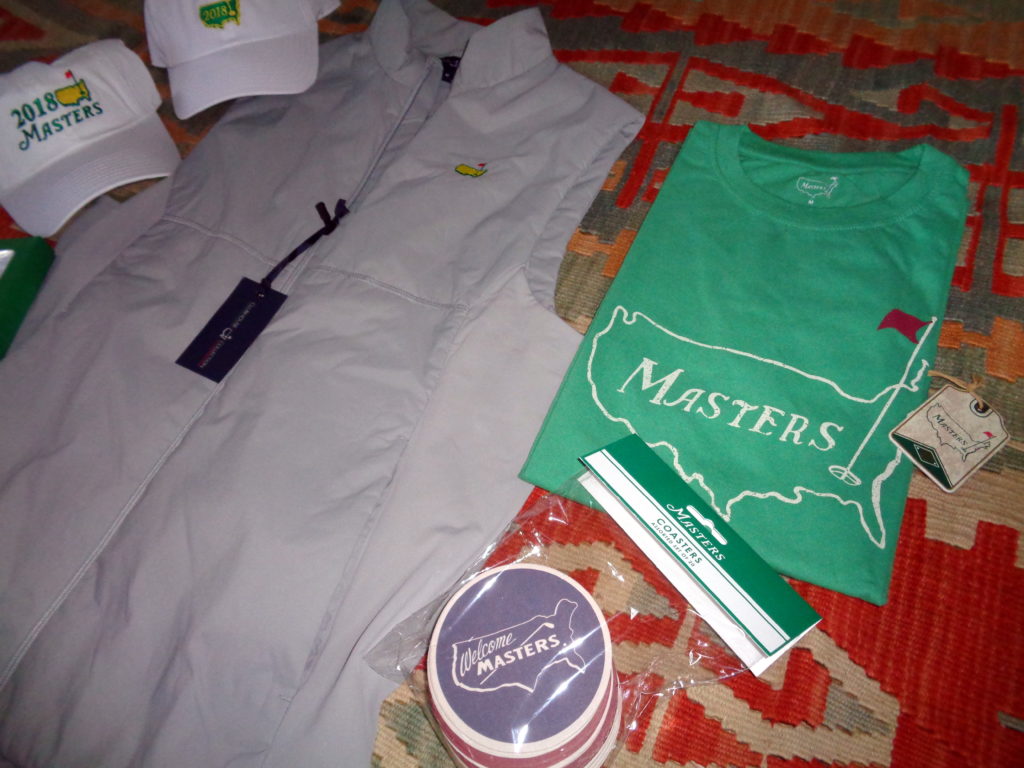 And that’s it.  My on-site Masters work is done for the year.  Now it’s time for me to enjoy all the online coverage, as well as the TV coverage.  We’ll throw down on Saturday with some friends, and lounge around on Sunday.  Here’s to another great year of the best sporting event on the planet.  It keeps getting better every year.