My friend and Old Try‘s Micah and I thought you’d all enjoy a look behind the curtain.  Micah provided a great behind the scenes look at their printing development process: 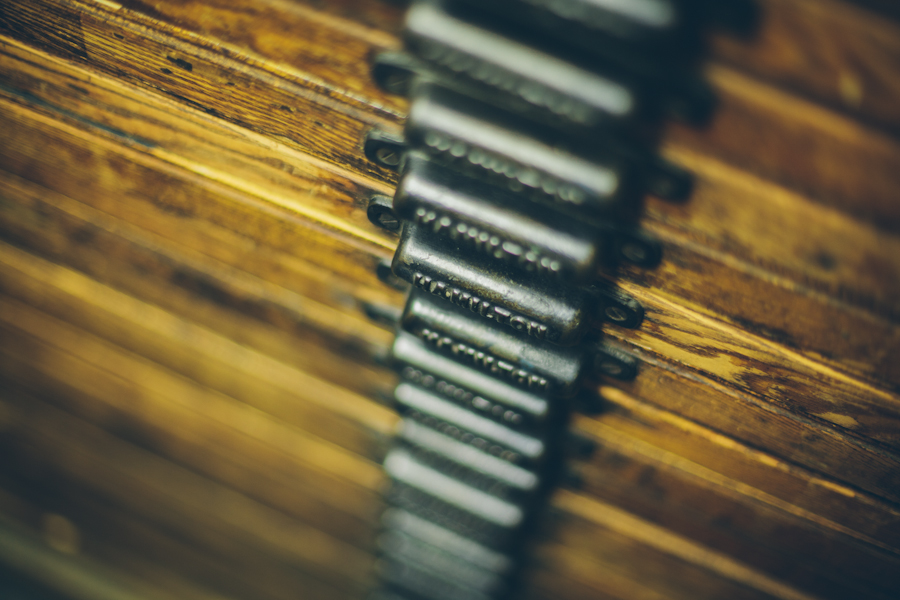 It’s 4:53. Sal and I are in the car, pulling out of the parking garage. Leaving. Early. Headed to the print shop.

Sal, text Eli for me. Tell him we’re running early, we’re going to get beer and then we’ll be there. Twenty minutes.

The sun is doing that thing it does in the late summer. ‘That thing’ it does is make everything look famous. I crank up an old Phish CD and we cross over the crews rowing on the Charles. The two of us run into the corner grocery, which Sal sums up: It still smells like cats and salt in here.

For a brief moment, Sal slept on a couch a floor up from us. Those were different times, times way back, times when we were new to New England. Times we weren’t missing home. Times when folks were figuring out where their lives were going. They were mostly good times. But times in which folks weren’t married, folks didn’t have school-aged children. We wouldn’t trade these for those, for those made us into who we are today. And today we are running early. 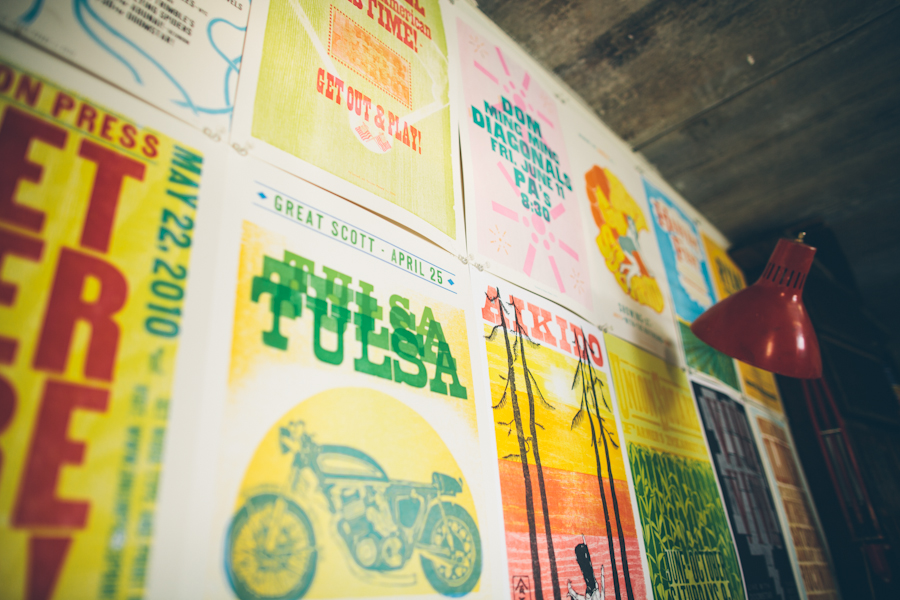 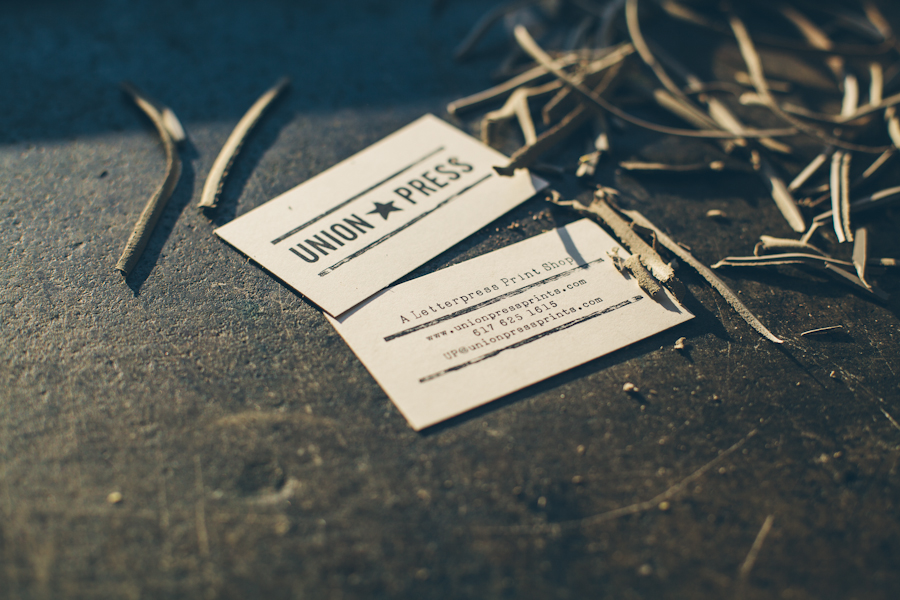 Years ago I’d pulled down a letterpress poster from a telephone pole in Cambridge. It was April 24th and the poster was for an April 23rd show. I didn’t think of it as anything other than preservation. Here was a beautiful letterpressed piece, 6 colors, with woodtype and wood cuts and a byline – C. 2010, Union Press, Somerville, MA

Micah, I’m going to teach you how to cut better.

That’s what Eli says to me. He’s a soft-spoken man. Even keel. Patient. I’m not sure if that what makes a good letterpresser. Hell, I don’t even know what folks who operate letterpressers call themselves. But that’s what he is, and he a heck of a letterpresser. (Turns out they are just called letterpress printers. Makes sense.)

We are working on some prints for Land Vs Ocean. LVO is based in Jackson, Mississippi and is Bradley Adair and Sanders Bohlke. I know Sanders from back at Ole Miss, and he’s gone ahead and made some beautiful music since then. Bradley is a creative director for a reclaimed furniture maker. But LVO – I still don’t know exactly what it is. All I know is what I’ve seen. With my eyes, I’ve seen this. It is beautiful.

After watching that, I reached out to the fellas. Told them I wanted to be involved. So here we are, printing up two prints for their next show on October 4th in Jackson. Sketched up some ideas, booked some tickets.  And now I am getting a well deserved rebuked for poor hand skills.

This statement he delivers as he makes a perfectly sharp 90° cut. Freehand.

Voicemail at 5:36: Ignore my text. I’m not going to head over. I think it will take too long for me to get there and I will be starving when I do. You guys have fun. Tell Dave I said Hi. Love you.

Marianna won’t be coming. Well, then. Guess its beer:30. 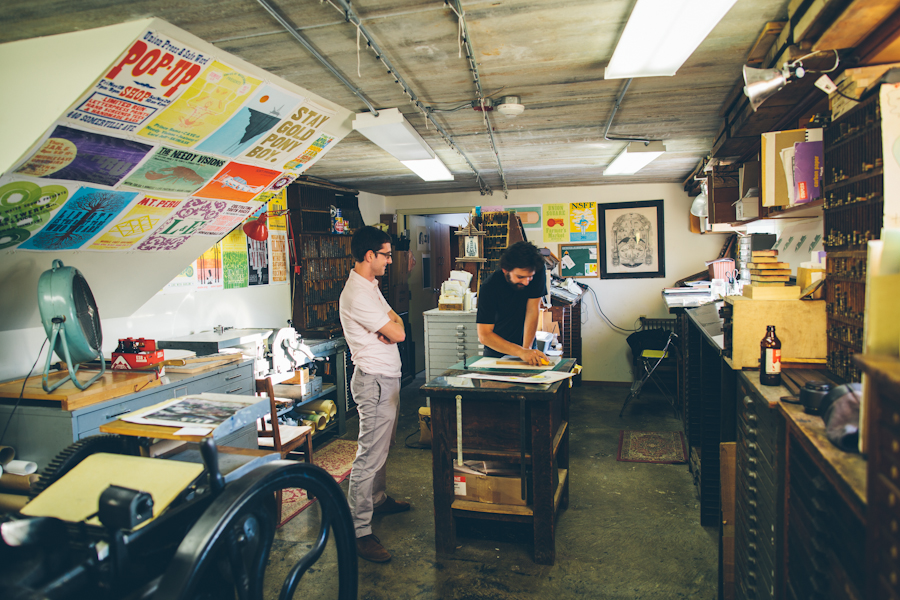 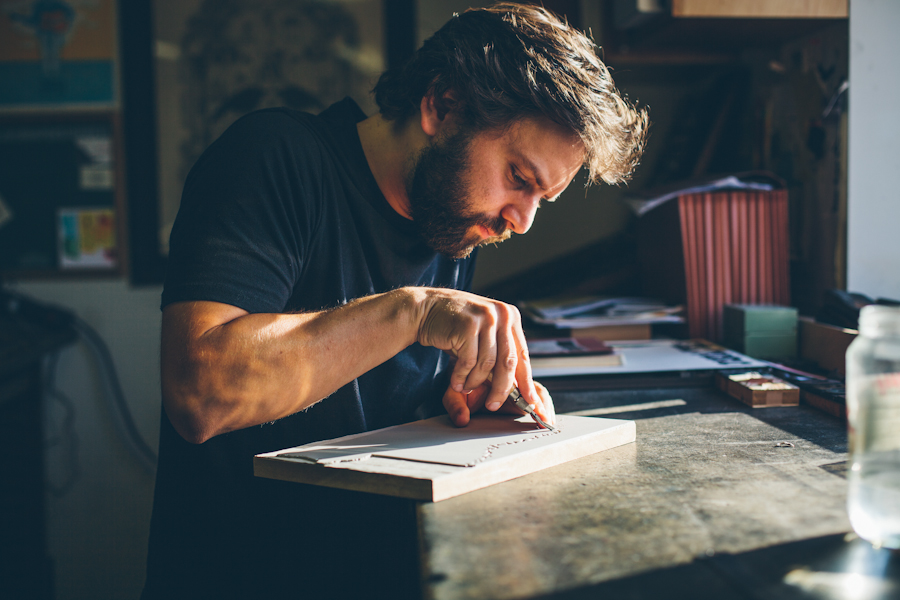 May 2011. I rang Eli. Asked if they did job printing at Union Press. Told him I had some things I’d designed. He invited me over to talk. Gave me the address to a building not far from where Marianna and I lived and where Sal had slept. Small world, indeed.

Union Press is in the old Somerville print shop. Meaning they have generations of worn led and wood type. Type that has been used to print broadsides encouraging thrift during war. Type that has been used to print little league posters for 4-foot nothing champions. Type that gives plate printers migraines. Why use worn type when you can have new type? Because used type literally has a story to tale. And has done so for decades.

I pitched my ideas and we talked about how we’d execute them. How to take my digital thinking and implement it into an analog device. Told him I didn’t know how it would go. That, worst case, we’d just end up with a stack of 100% cotton paper with some ink laid down on it. Asked him to print up 10 designs of 100 prints each.

Little did we know that we’d repeat the process dozens more times over the course of the year.

….
So, can I talk to you while you are carving? Or will you screw up Mississippi?

We get to talking. About business. His and mine. About phone calls from folks I’ve sent his way. About prints I thought were going to be hits that are misses. About the neighborhood.

Dave is flying around, shooting anything that glitters.

The thing I appreciate about Union Press is their commitment to the craft of printing. They do their best to avoid any kind of plate printing. Which is what most letterpress today is. Folks mail off designs and have a polymer plate cut which only lasts for so many runs. Then the plates are inked up, run far too hard where there is an deboss effect created. It’s precise and it’s fine, but it isn’t how Eli likes to run things. It’s not how the old timers like to run things. (A heavy indention is a sign of an unseasoned printer, though nowadays, folks pay extra for it.) Eli likes the imperfection that comes from honest printing. He likes mounting up linoleum and getting out tools and operating on his own terms.

Which is why he won’t accept my beer offer just yet. 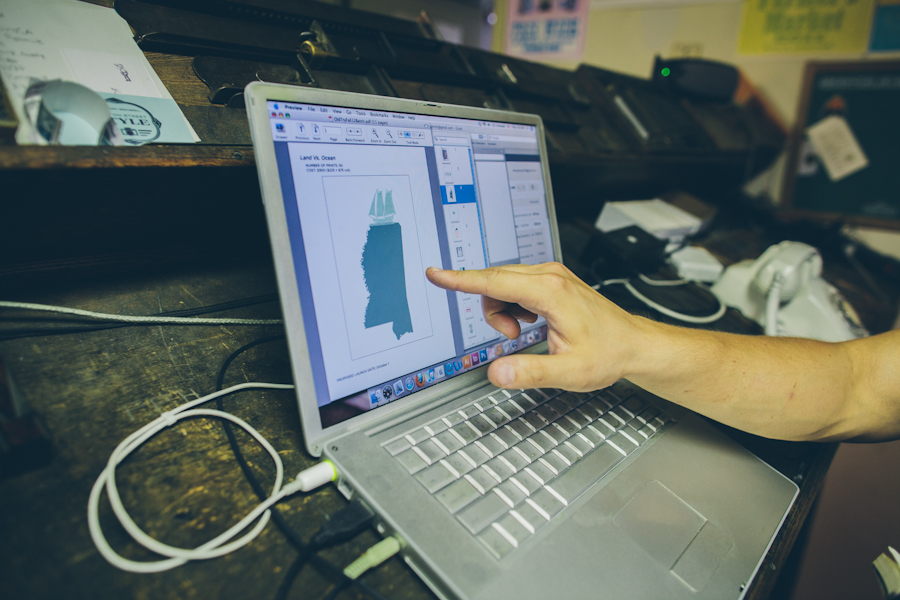 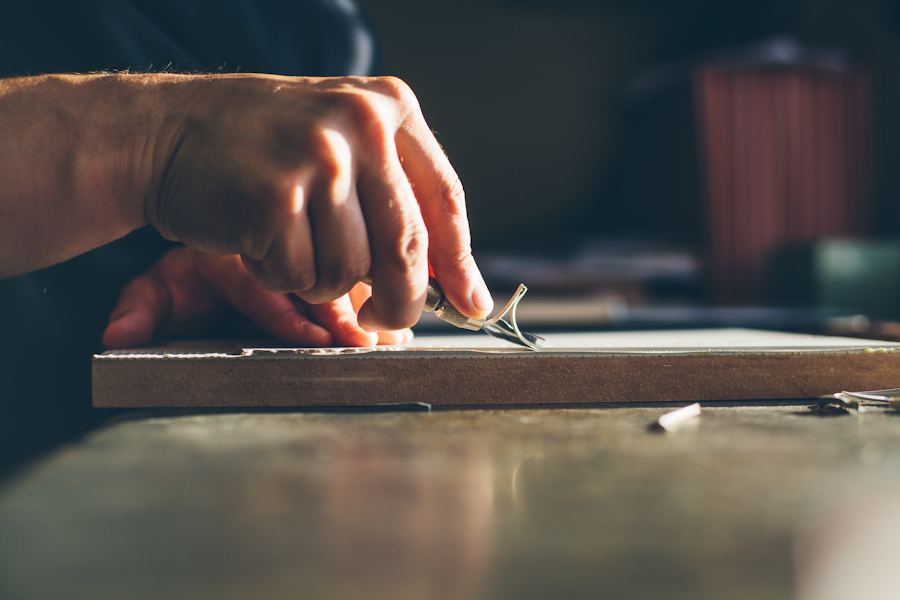 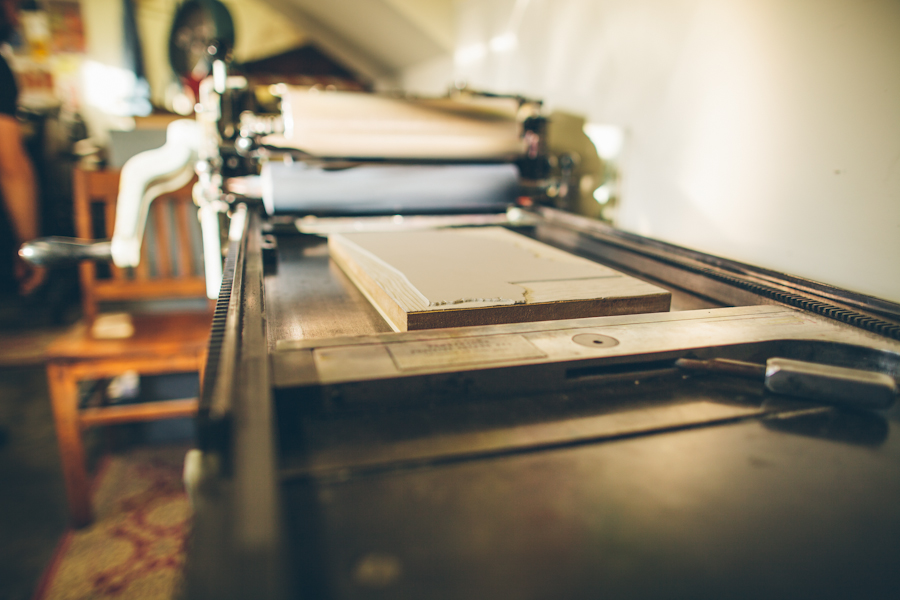 Sal make beautiful portraits which are largely funtions of great light, complex lenses, one hell of an eye, and a steady hand.

I’m the only person in this shop who’s hand skills are lacking.

We pause for portraits. I think Eli could do without the hubbub. But like I said, Eli is patient.

When you run a print with multiple colors, you have to separate them. One color is printed at a time. It is then left to dry. The rollers are wiped cleaned. New colors are mixed from cans of solid ink. The press is reset with the next part of the design and locked up with wood furniture. Color is added. Proofs are run. Registration is checked. Lead is added. Pressure is added. Proofs are run. Color is tweaked. Rollers are cleaned. Re-inked. Run again. Better. Lead removed. The prints are ready to run again. Which is why letterpress takes patience and why that poster I pulled off the lightpole surprised me. 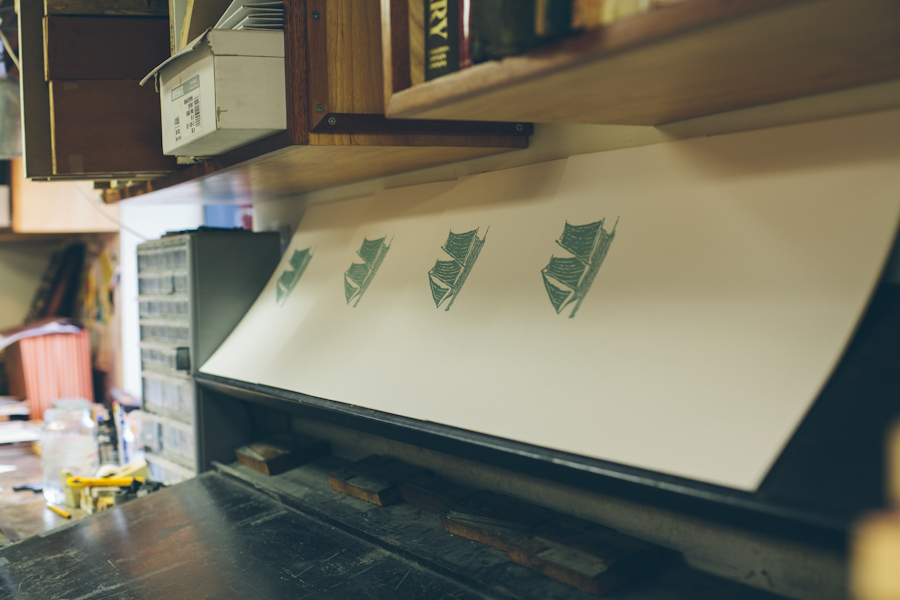 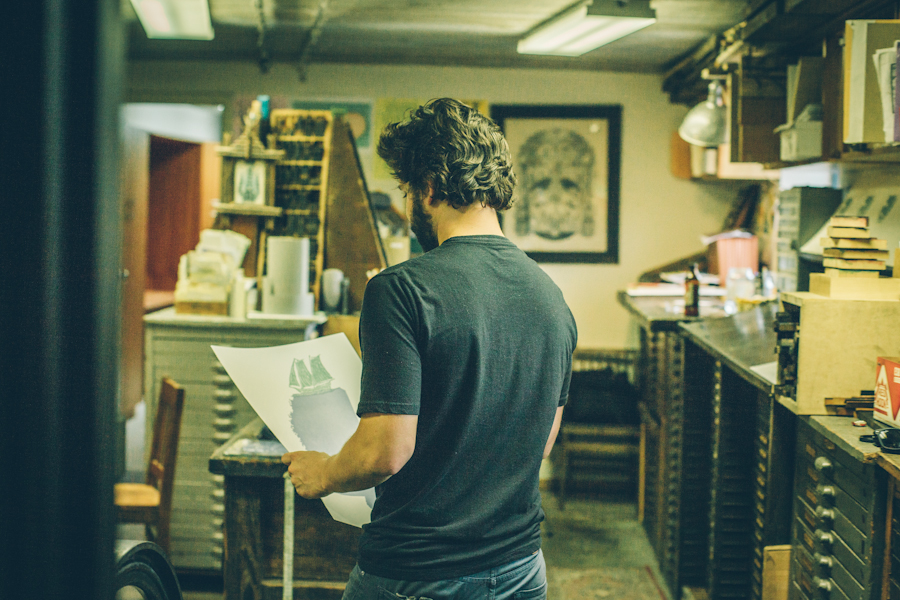 A six color letterpress print is insane. Like the ’03 Ole Miss / Arkansas 7 OT game insane. Looking at the final score, you might not realize what went into it. But when you realize it was over twice as long as a regulation game, you just step back and say damn.

Of course, when the ink is perfect and the rollers are rolling and we’re ready to run prints, the light outside gets perfect. 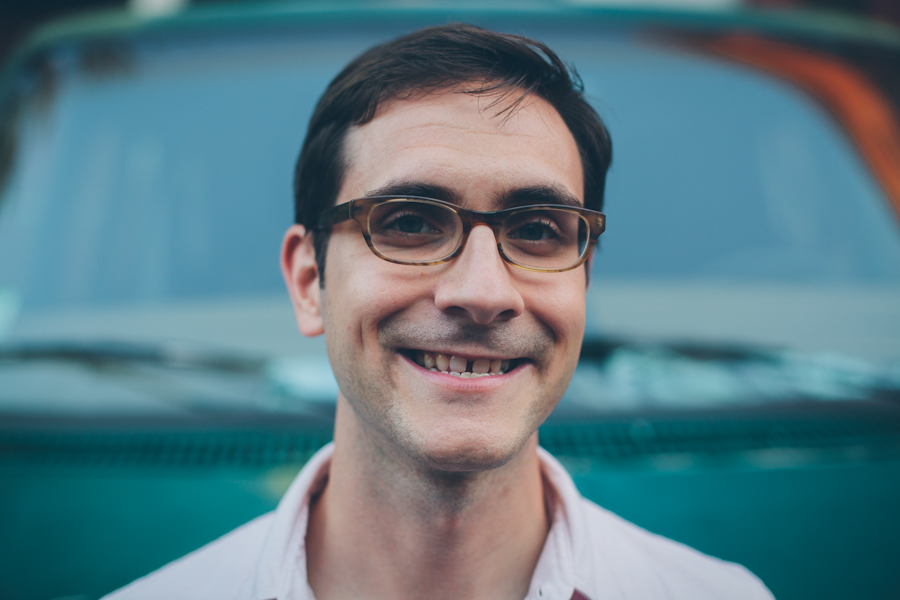 Dudes, outside. I need to shoot portraits.

Me, to Eli, who is now standing in front of a van, holding a proof of our Land Vs Ocean print: Those rollers going to dry out?

They’ll need a couple of hours.

An important point for trivia, should it ever come up.

Back inside. Eli will have that beer now. After two days of work, it’s time to print. 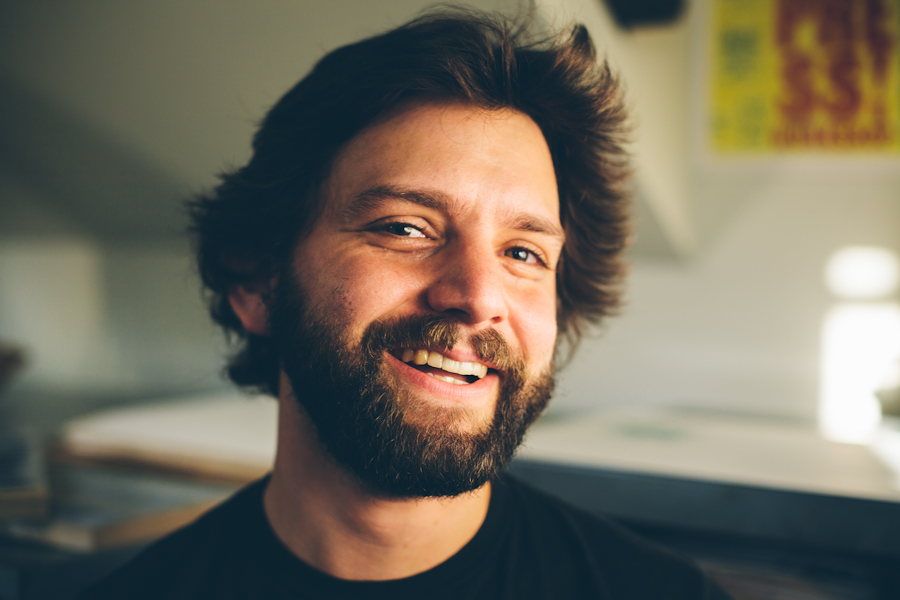 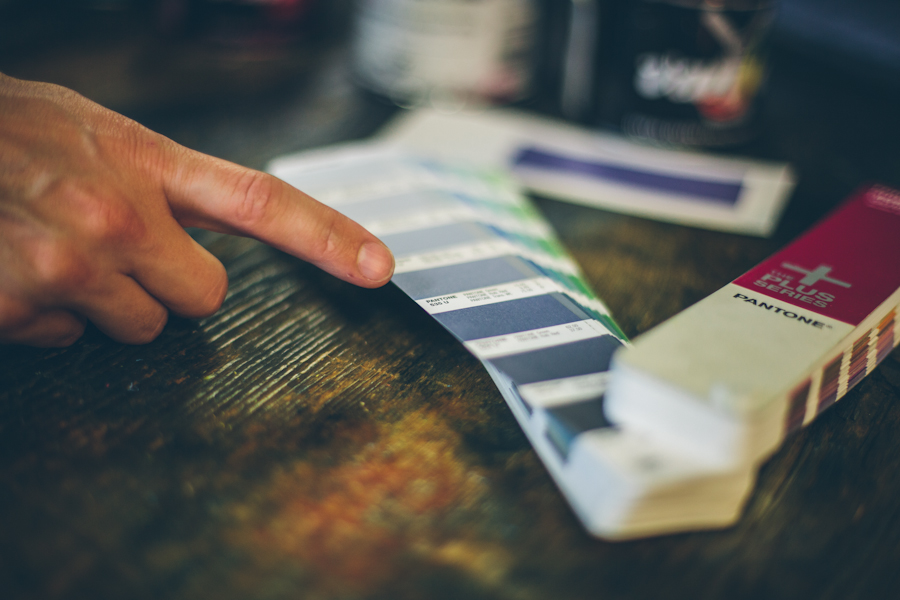 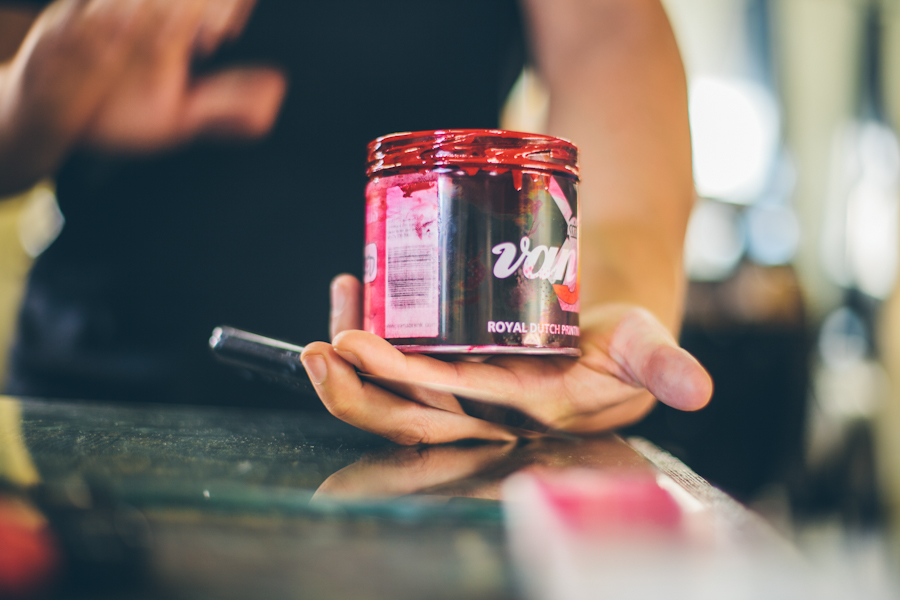 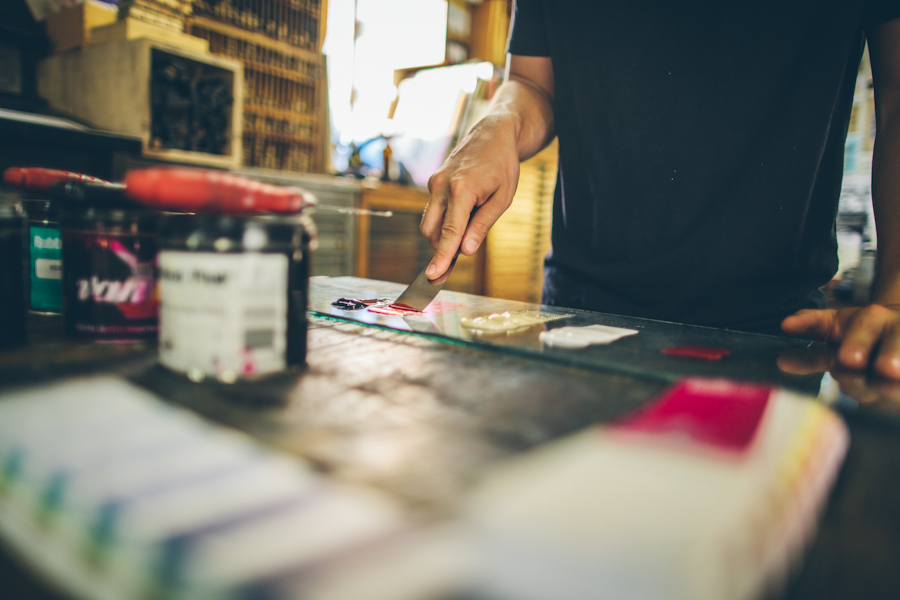 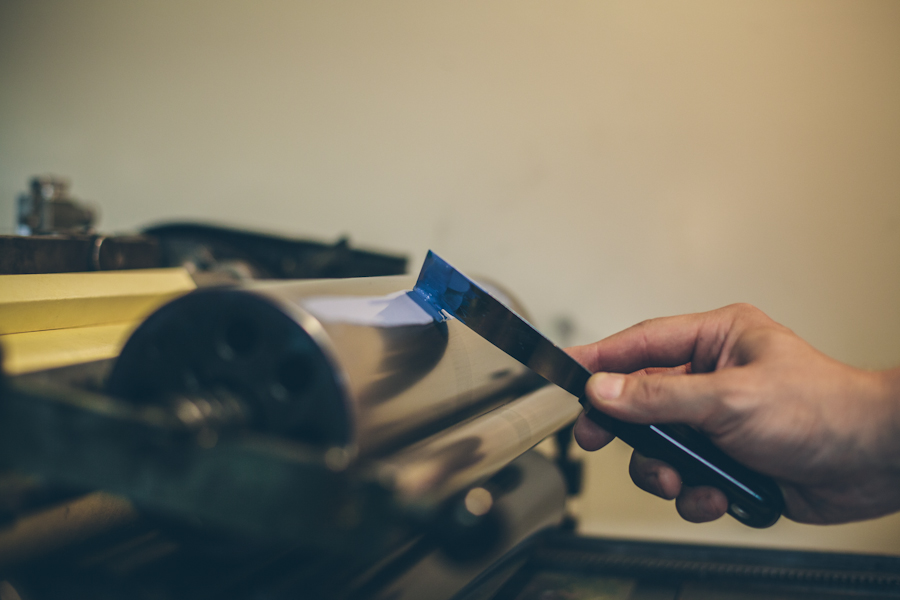 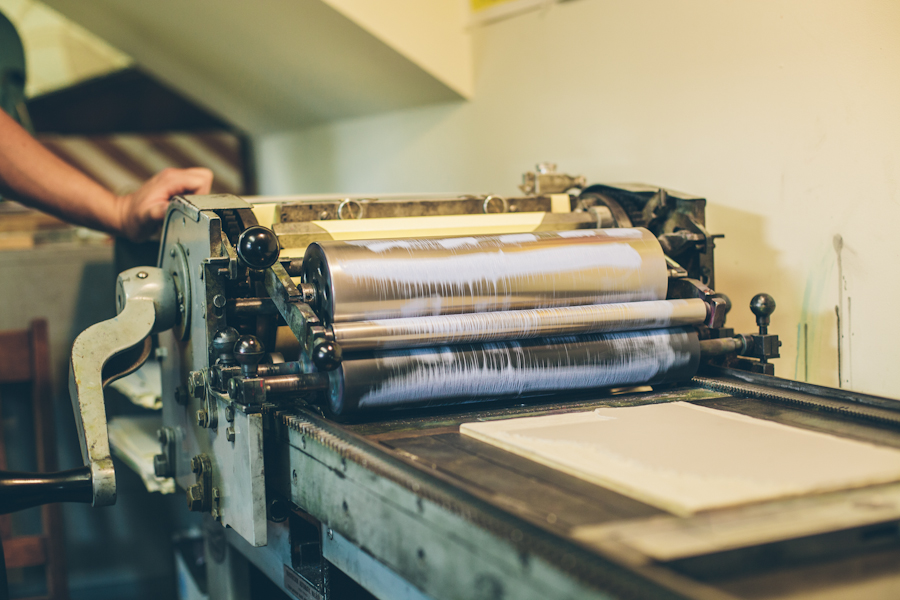 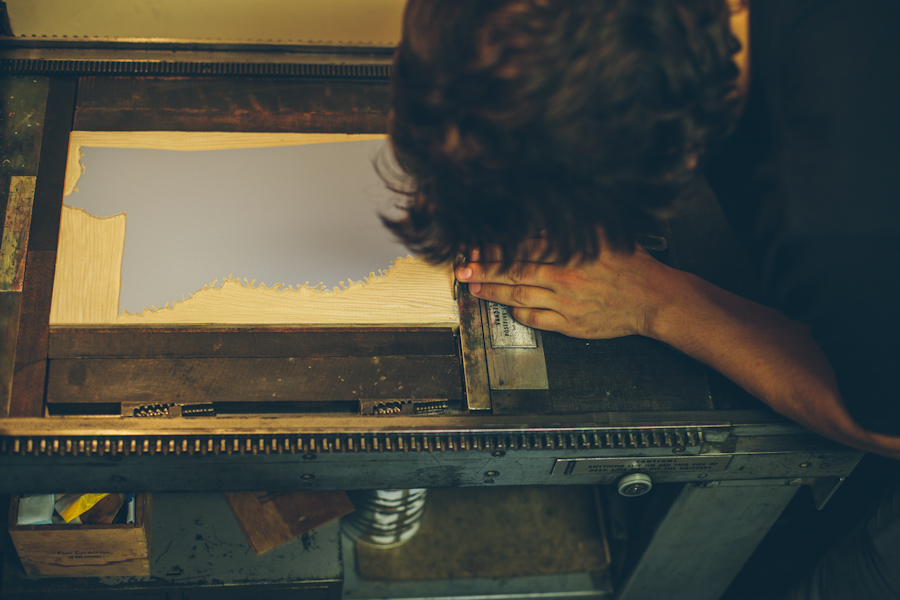 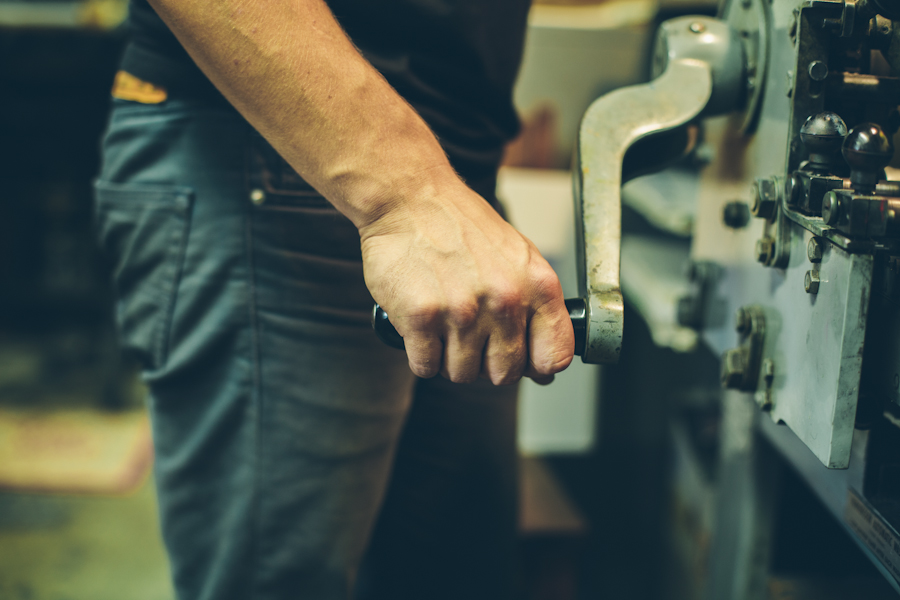 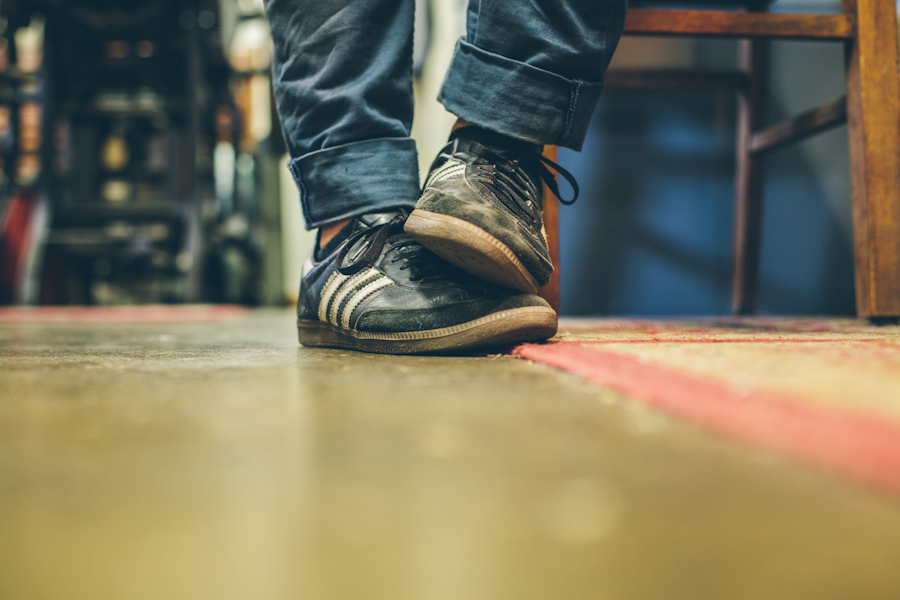 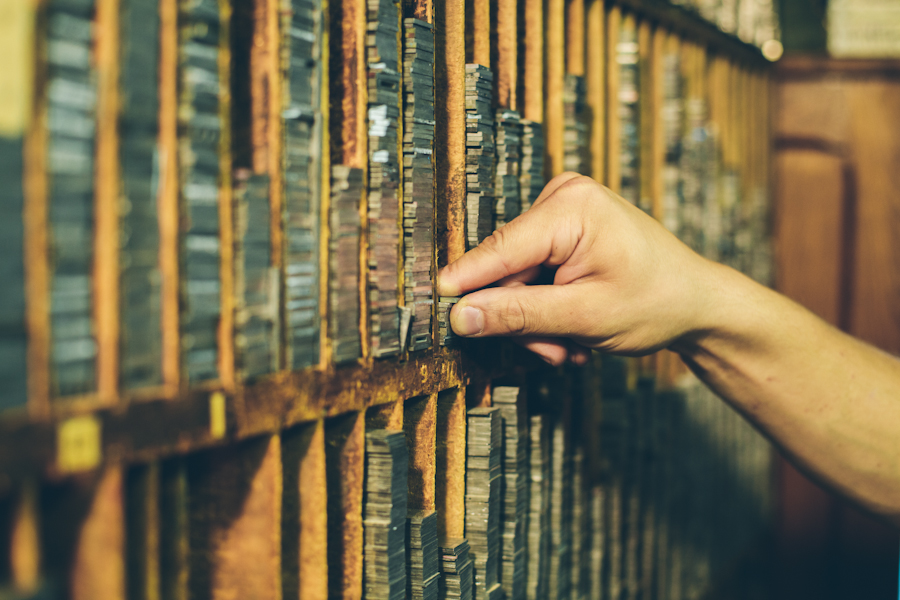 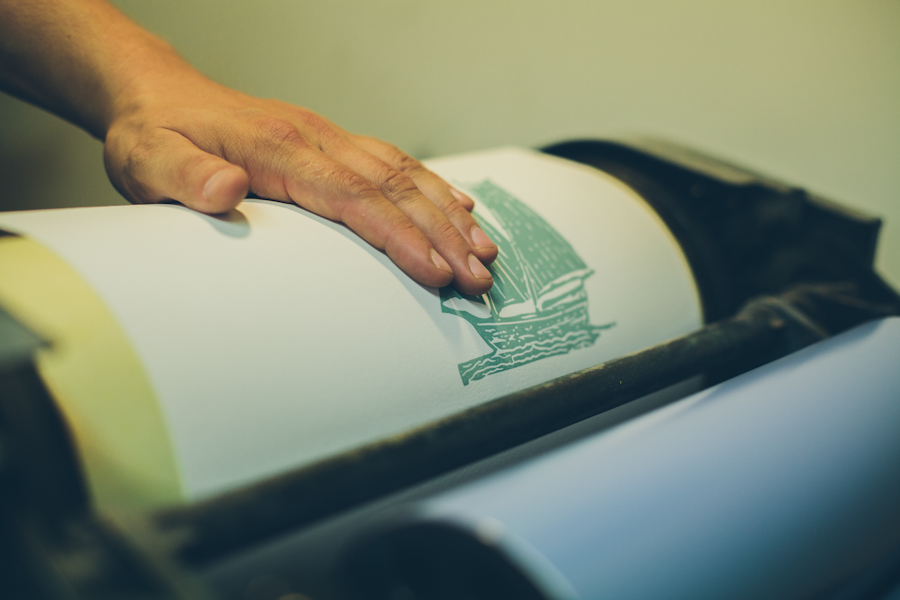 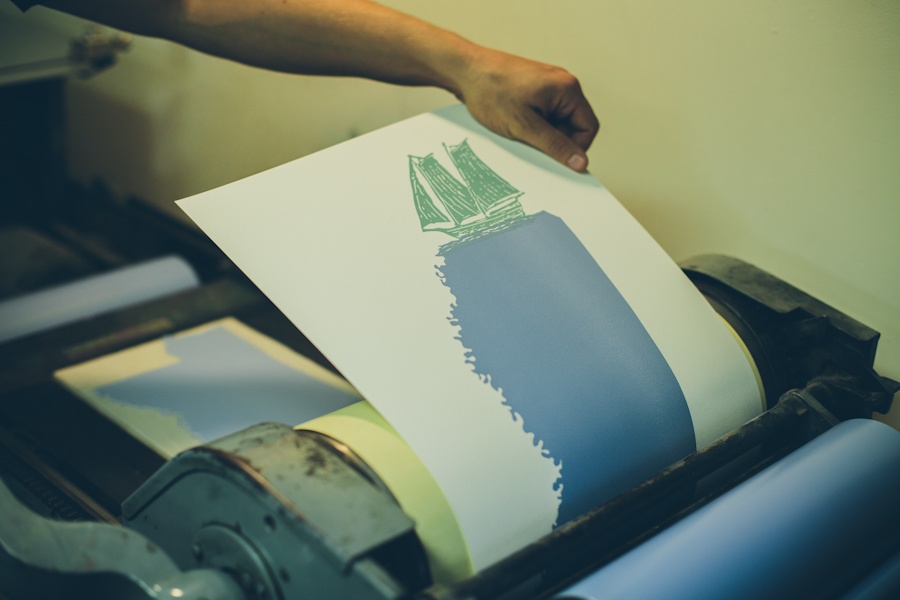 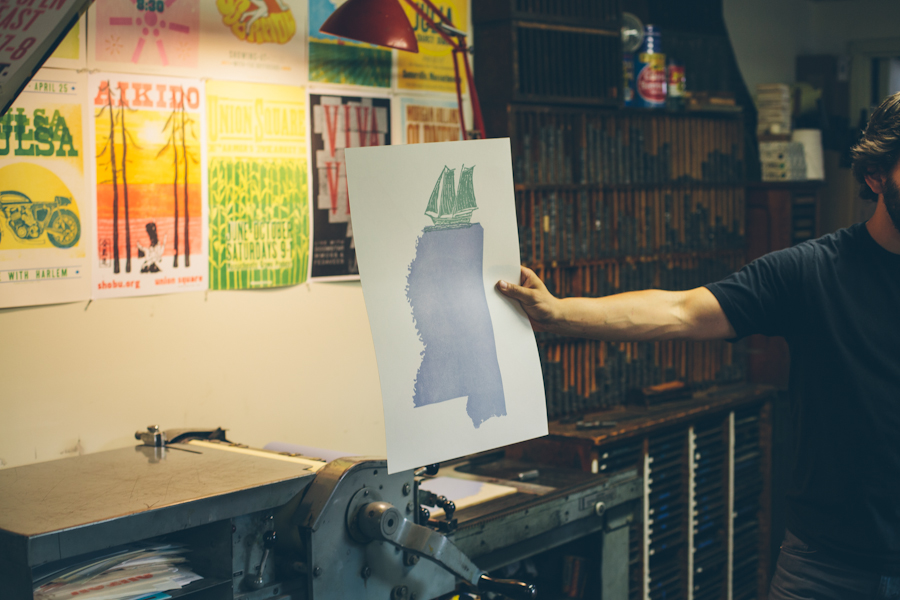 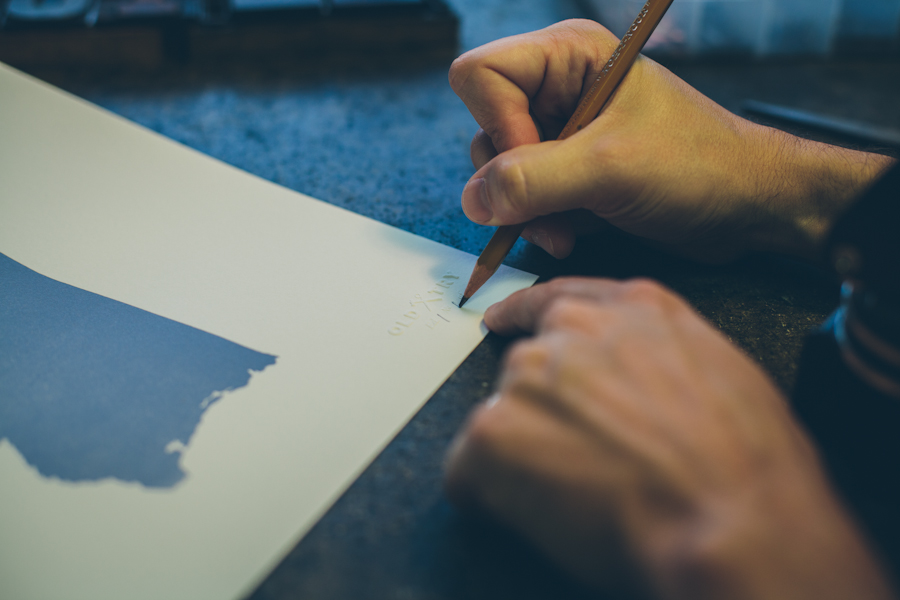 Once the light in gone, the snapping slows. Eli hits his stride and the old Vandercook hums and clicks as each new piece of paper is tattooed with Mississippi. As the Delta starts fading, new ink is dropped onto the rollers.  Man and machine are dancing, and all we could do is watch, in amazement.

This old artform isn’t going to disappear if Eli has anything to say about it. And so long as we keep finding folks who want a piece of home, we’ll keep sending business his way.

I drop a couple of beers in the fridge, for the next night Union has to keep the lights burning after the rest of us have gotten wrapped up in college ball or reality TV. Sal is packing up his rig and looking around, soaking up the last bit of the old cases and machines. We’ve wrapped. Early.

You got anything I could get for my little boy? He was born on July 4th. Just turned five.

Eli pulls open up a flat file. Of course he’s got some prints. Tons of ’em. 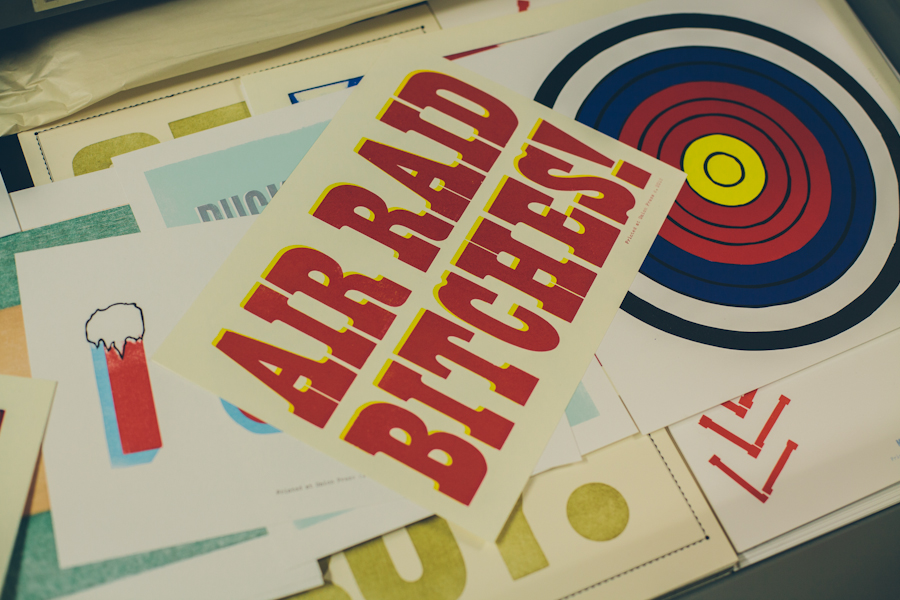 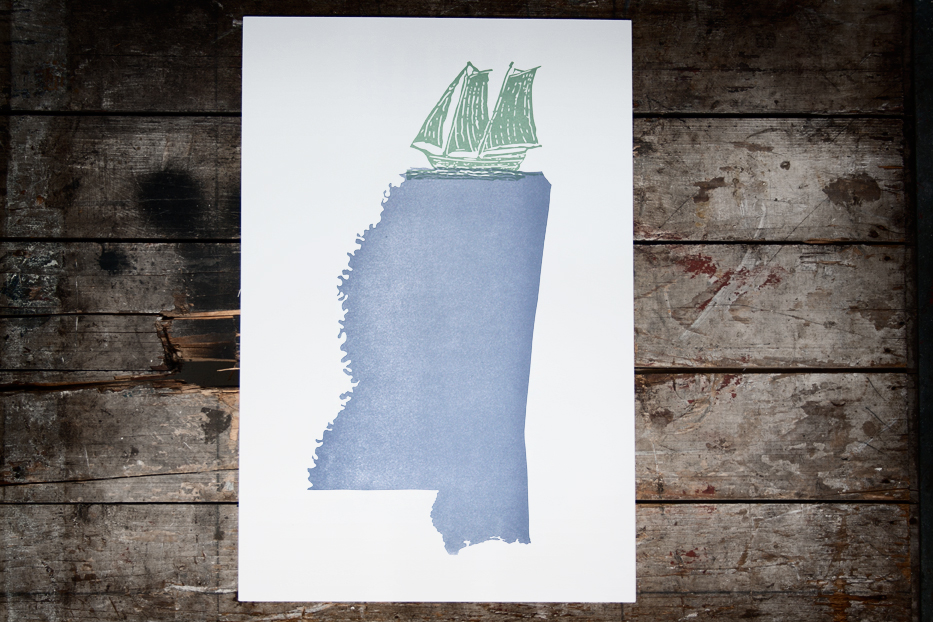