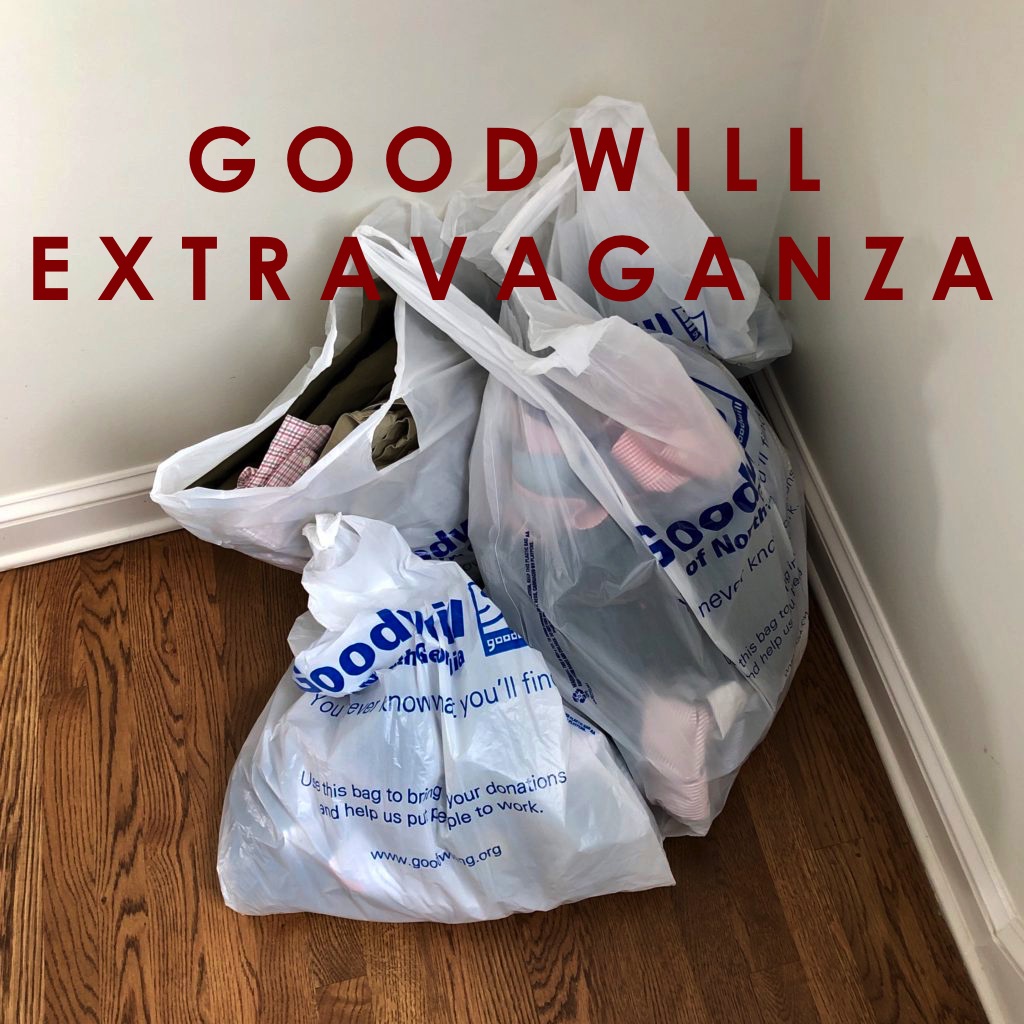 I this Monday off in observance of Martin Luther King day, and had absolutely nothing on my calendar.  HJS went to daycare, and Mrs. RCS had to work, so I was left with an entire day to myself.  Being that it was 19 degrees outside when I woke up, there was no way I was going fishing or playing golf.  I was tired of sitting around the house, so I decided to do something I hadn’t done in a long time.

Goodwill Extravaganza.  I found four Goodwill stores around the city that I hadn’t visited in a while and plotted out my course.  I arrived at the first of the four as soon as they opened at 9AM and got to work.  Overall, it was a really good day.  I’ll give the total spend amount and time invested at the bottom, but let’s go through the goods first.  I always start in the dress shirts section.  Here we go: 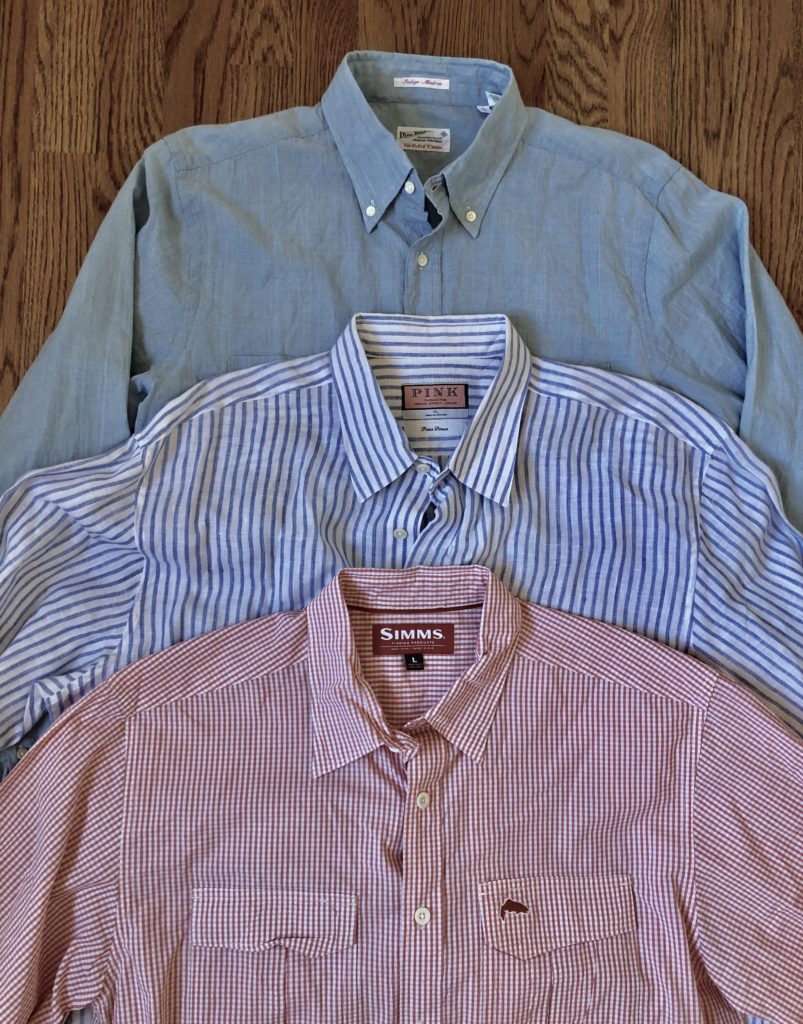 From top to bottom: A really lightweight Gant Rugger Indian Madras shirt.  I really like the solid blue.  Second is a Pink striped linen shirt.  I’ve never seen one like this, and love it.  It’s an XL so I’ll have to get it tailored, but it should be worth it.  Both of these should get lots of wear in the Summer months with Res Ipsas.  Lastly is an all cotton Simms fishing shirt.  I thought this was good to add because the previous owner dry cleaned it.  I need to rough this one up. 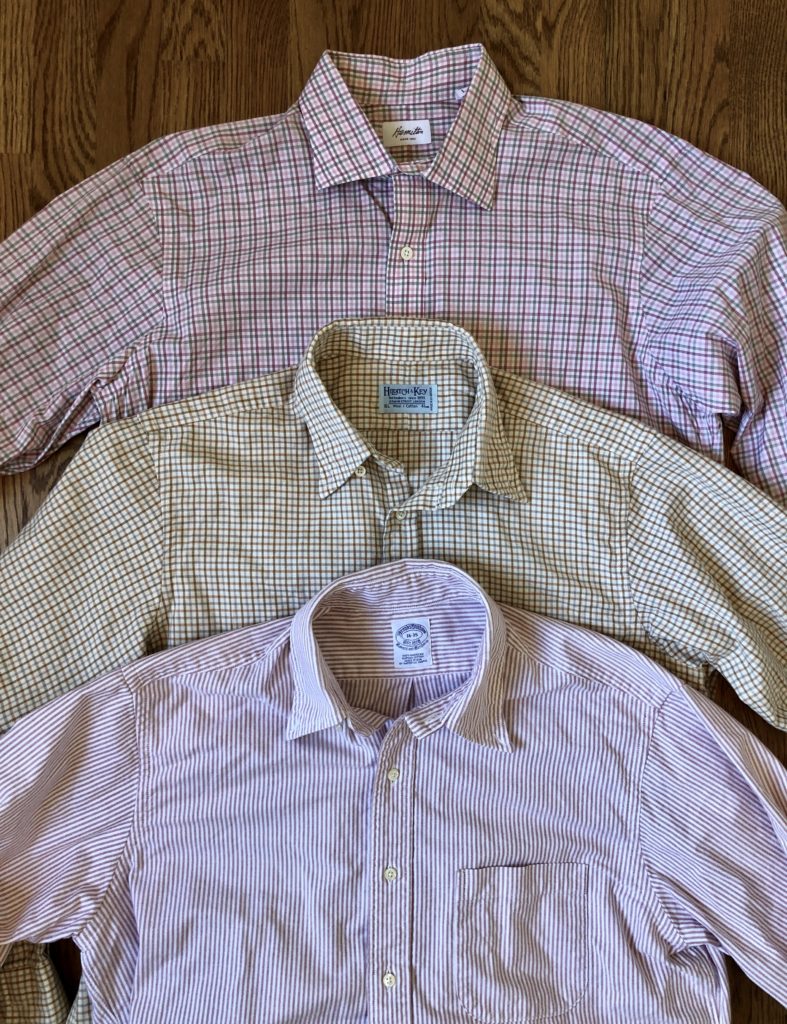 Starting at the top, a really nice Hamilton pink and tan plaid.  Great look that is different than anything in my closet.  May have to do some work on this guy as well.  Second is a Hildich & Key flannel in a really nice cream, tan, brown, and sky blue pattern.  I’m a sucker for unique (and well cut) flannel shirts.  Last is a Brooks Brothers must-iron Made in the USA red Ustripe OCBD.  I plan on beating the crap out of this one. 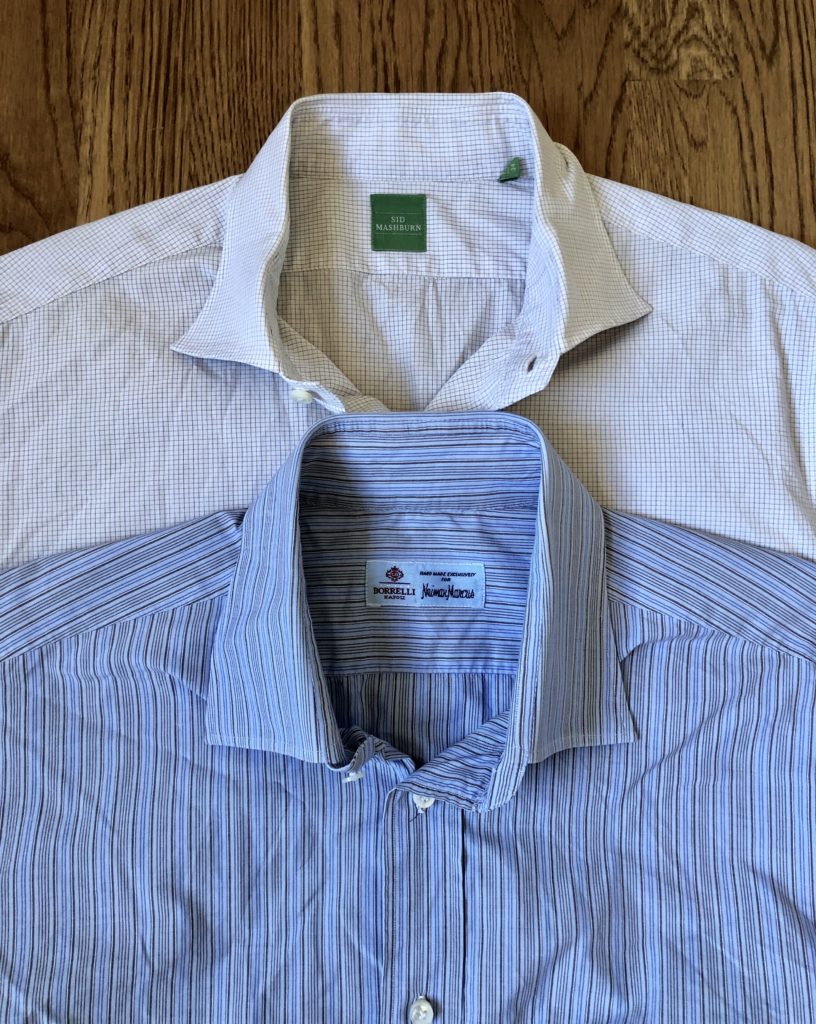 These Sid Mashburn and Borrelli shirts were a great find, but the shirts themselves are pretty dingy.  The buttons, however, are as nice as anything on the market.  and both of these shirts were half off, so two really great sets of shell buttons is nice to have at $6 total.  Reason: I’m not a big fan of dark/tonal buttons and I’ve been known to replace them… 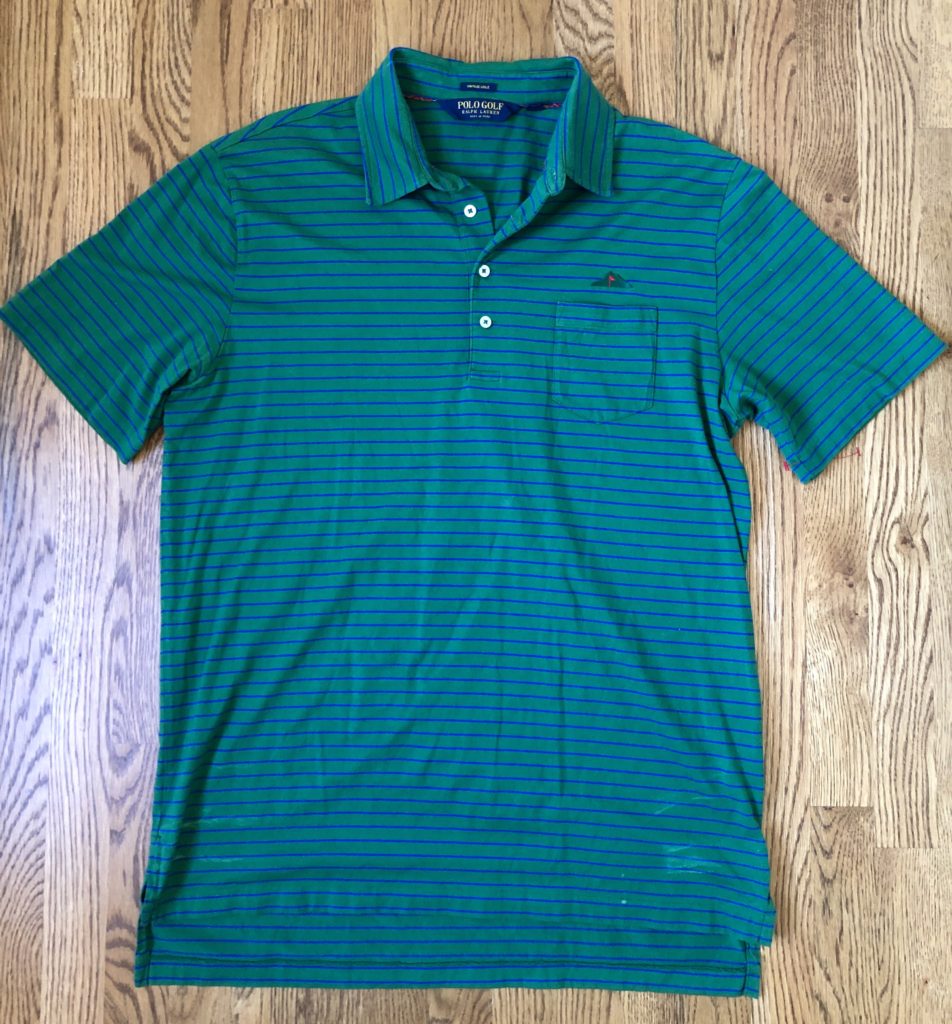 I never got a shirt from Wade Hampton when I played up there, but that is remedied now…basically new Polo Golf shirt, and the deodorant stain washed out beautifully.  I really like this one…a bit of an old school design and color way with the emerald green and royal blue stripes. 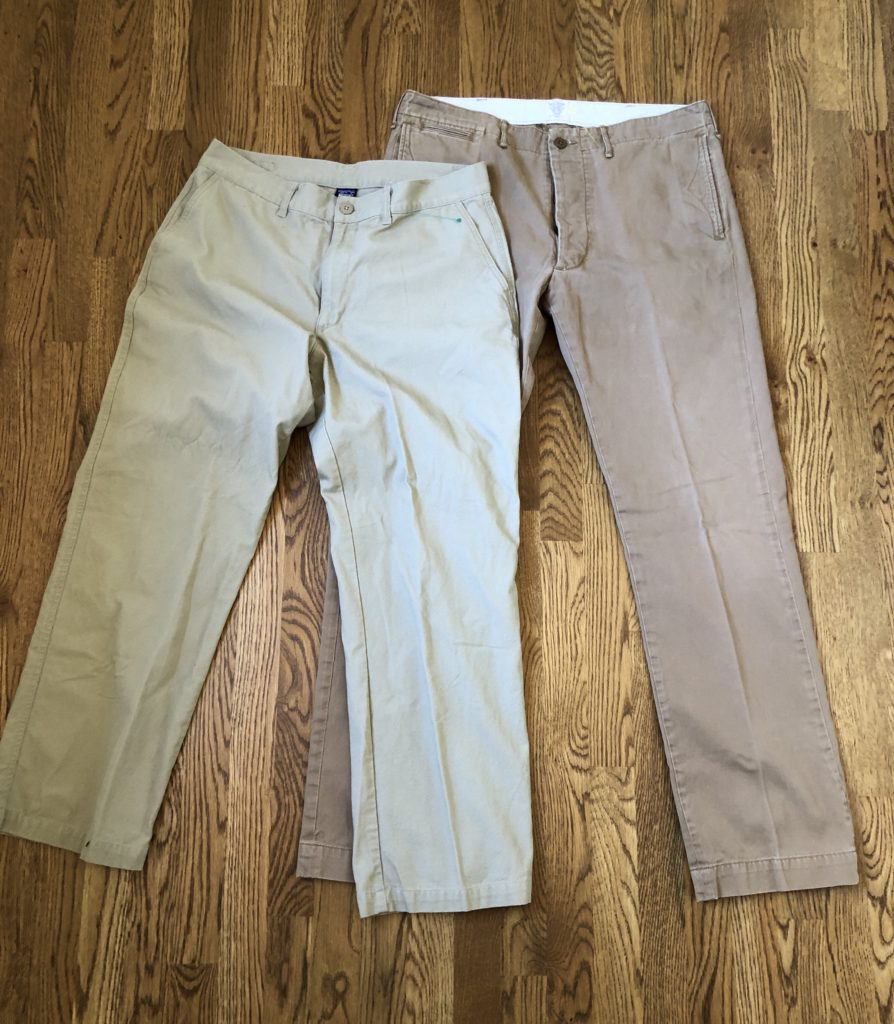 I found two great pairs of chinos worth mentioning…On the left, a pair of Patagonia organic chinos.  Don’t look to be worn.  My size, and my inseam.  Hello weekend pants…nice to meet you.  On the right was a great find: the iconic RRL Officer’s Field Chinos.  These things are built like a tank, and have been worn sparingly.  They are too long, so I’ll have to have them taken up.  I don’t think I’ll have to taper these at all.  I want to turn these into boot chinos – more for a #lodgewear look. 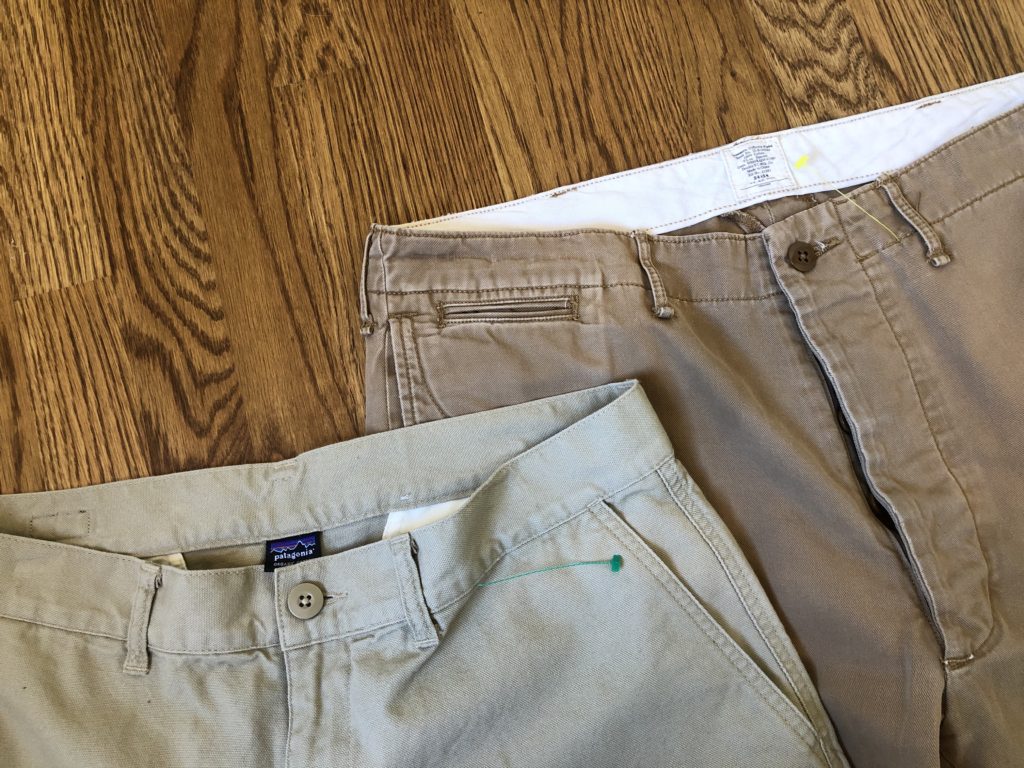 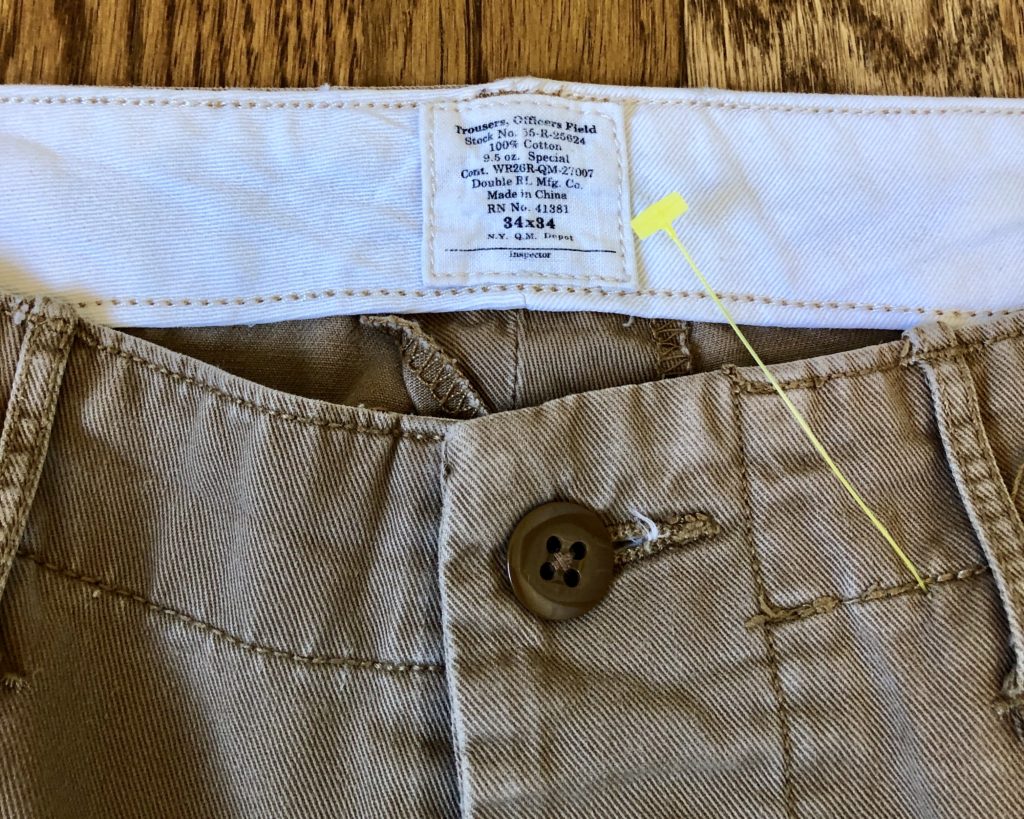 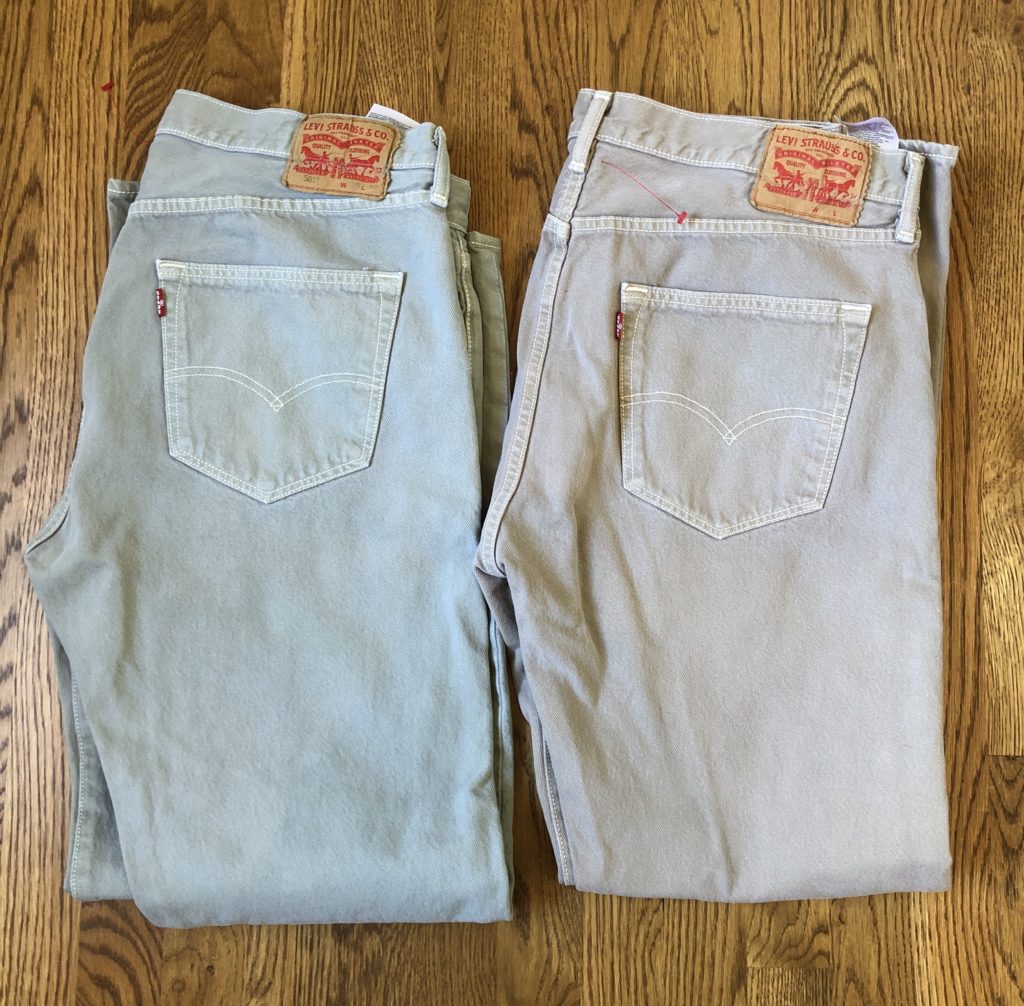 Two pairs of Levis 501s X Sid Mashburn garment dyed jeans – one in light green and one in tan.  Just a touch too big for me, so they might need a little work, but it’s worth it.  I wear these all the time. 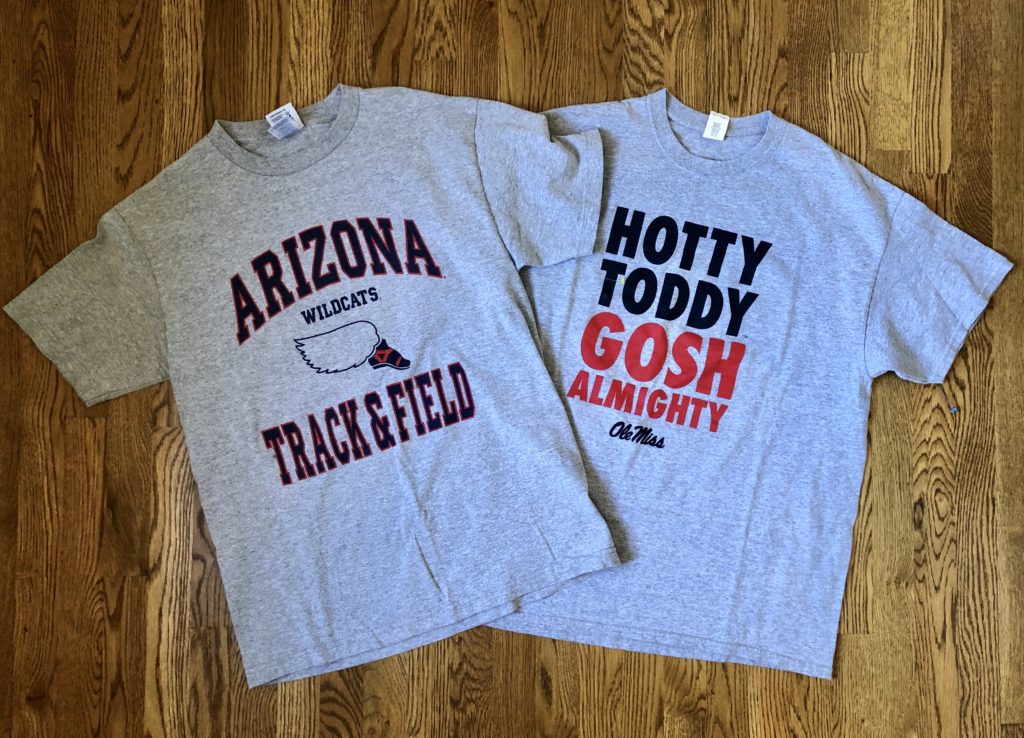 This is a dad-hack, but for obvious reasons, I live in t-shirts around #HJS.  At $2.99 a piece, they become disposable once the stains become too much to bear.  I usually go for the old school heather grey look, and scored with these two beauties. 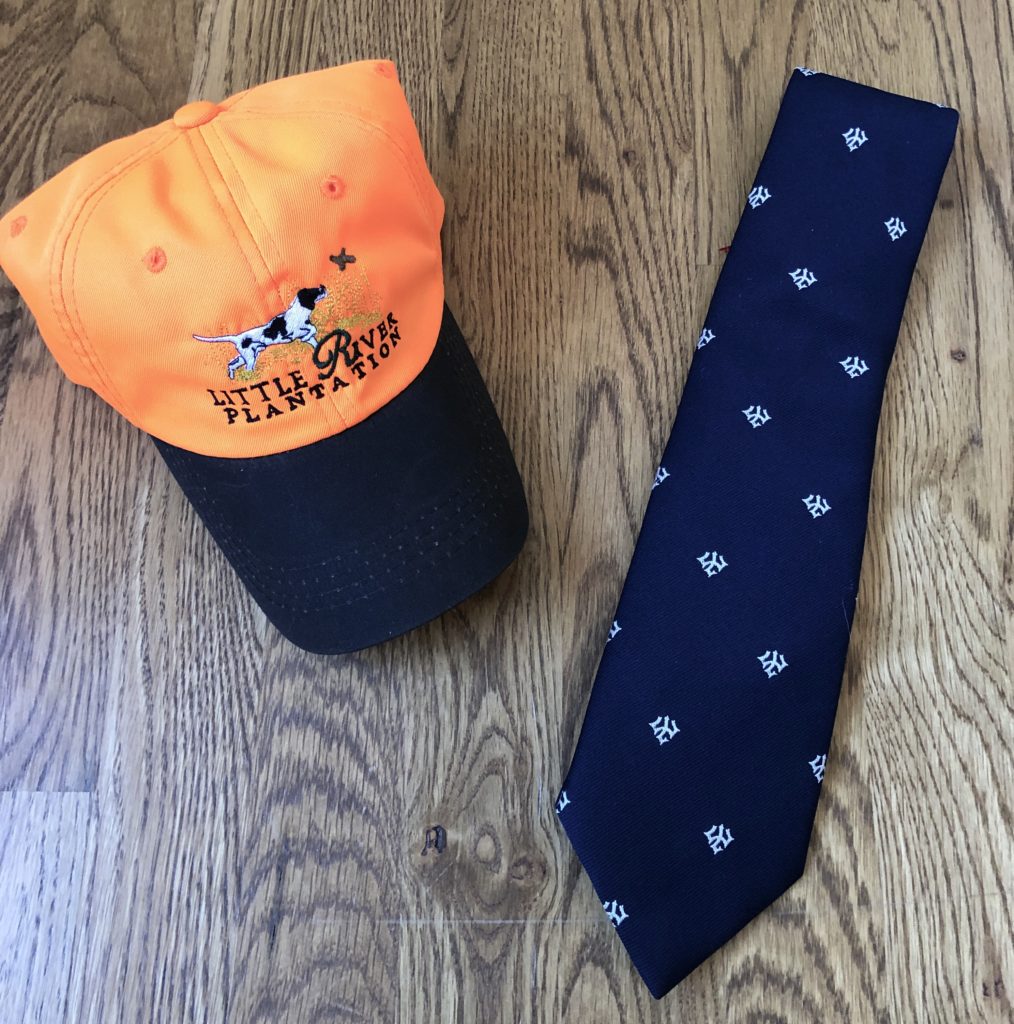 I rarely look through ties anymore, as I don’t really wear them.  I search for foulards and emblematic ties…and scored with the W&L tie in perfect shape.  I’ll be giving it away on Instagram in a bit, head over to get entered.  Blaze hats are always a yes.  You never know when you’ll need one…at least that what I keep telling myself. 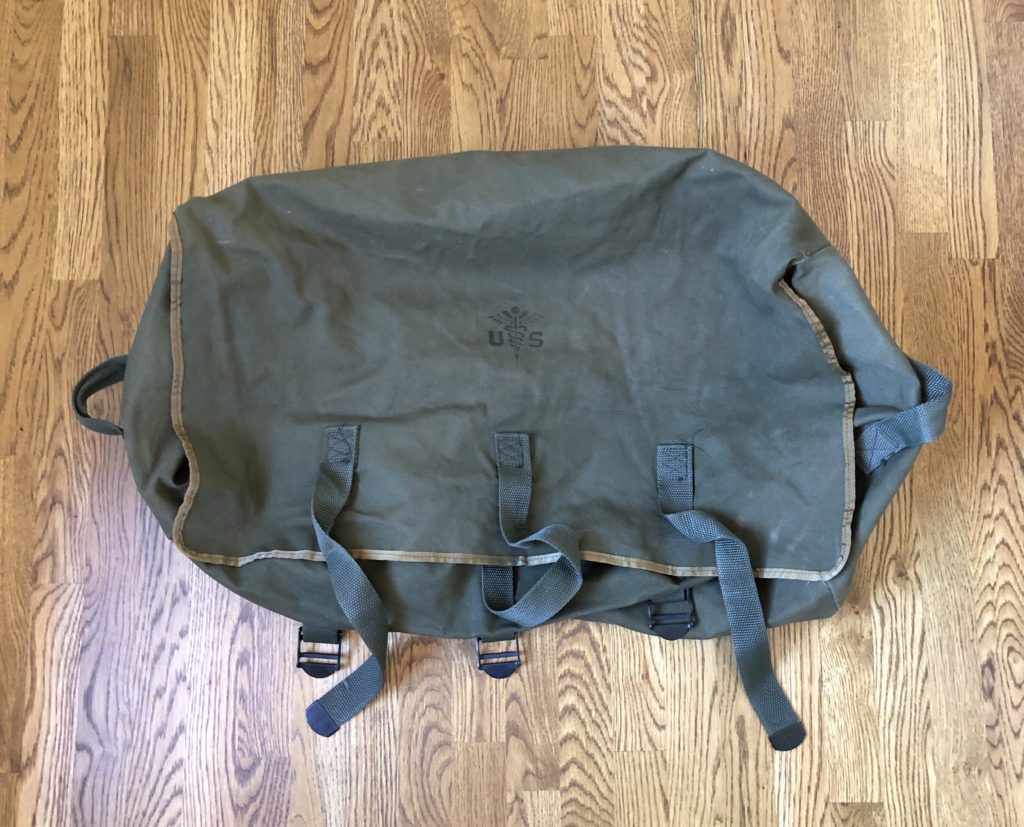 Lastly, I found this really cool vintage military duffle bag.  It’s a great size – comparable to the Filson large duffle, and made of some pretty sturdy canvas. 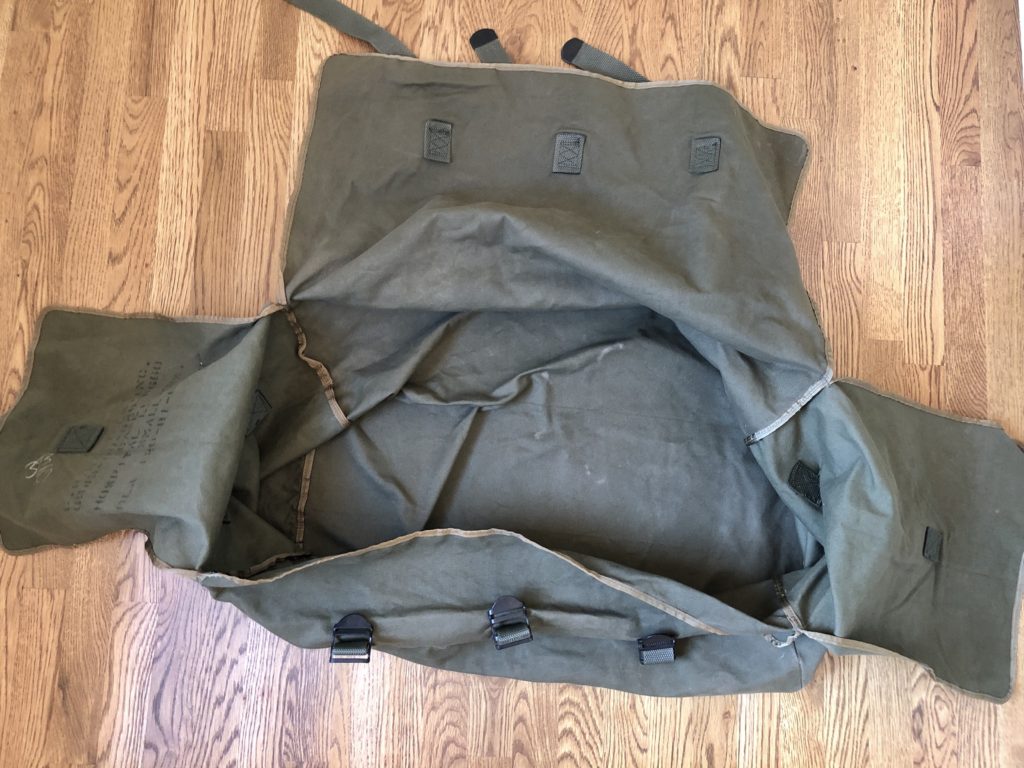 It’s got a cinch and strap closure system, and was apparently used for hospital linens.  I can see using this for hauling decoys or storing waders…or for carrying some bulky stuff.  For $3.93 there was no way I was going to pass. 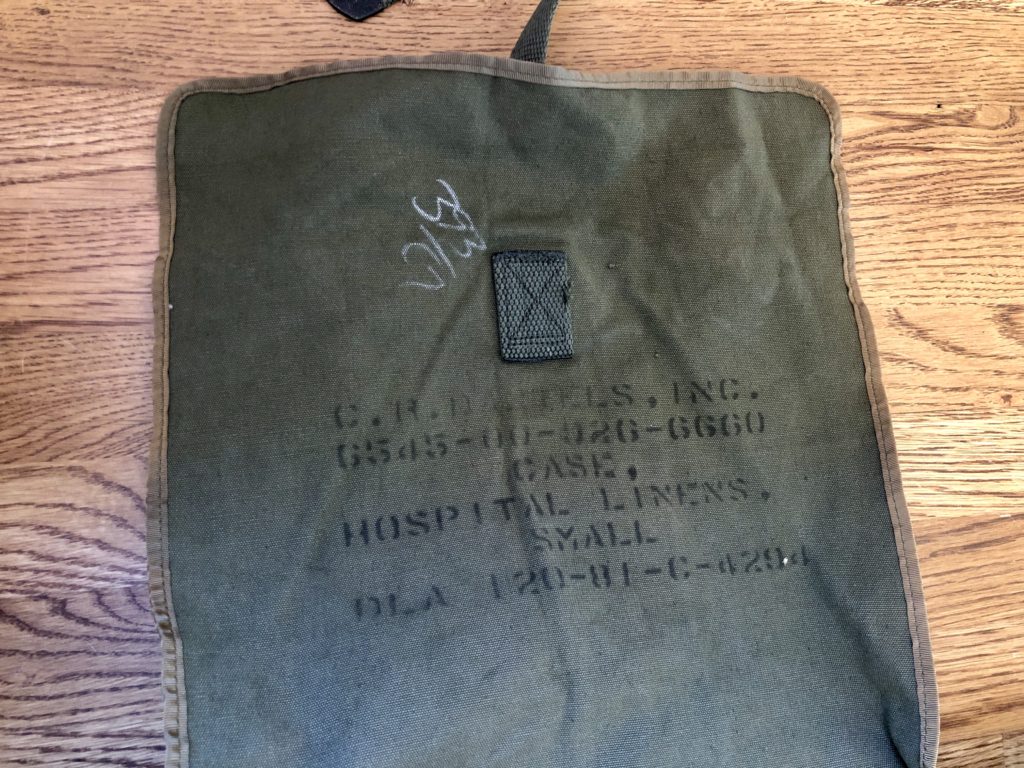 Beyond this, I did find some other ‘stuff’ that wasn’t worth mentioning.  Stuff like a NWT pair of CoH jeans for Mrs. RCS, as well as a new Nike sweatshirt, some household stuff, and an unopened can of tennis balls for the dogs. 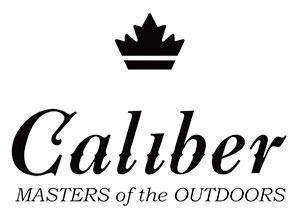