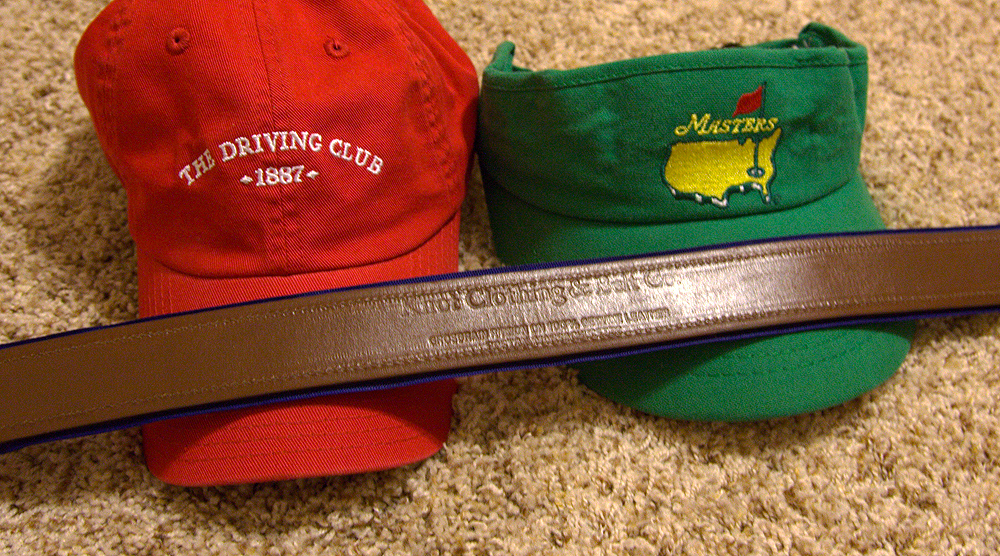 My buddy Nick over at Knot Belt Company has released his leather tabbed belts – a great addition to his current d-ring selection.  One design that is completely brilliant is the ‘Four Majors’.  Nick sent me one to check out, and I must say – this belt is excellent.  All you’d expect and more in a leather tabbed – and leather backed – belt.  As an avid golfer, this is a no-brainer.  Nick is an avid golfer as well, and I asked him to put something together on the four majors – here we go:

If you know golf, you know there are four majors.  If you’re a golfer, you refer to them as The Four Majors.

I hit my first golf ball on a course designed by Robert Trent Jones Jr. and caddied for my father whenever I could.   My mother would drive me to junior golf camp at seven in the morning and pick me up just before dinner.  When I was 14 I would go to the local course and clean cubs or pick the driving range for free golf.  I’ve worked on the grounds crew, as a bag boy, as a caddy, inside the pro shop and even filled in at the snack shack and attached beach club a few times.  I never wanted to leave the course so working 5am until 10pm, with a little golf in between, became my summer schedule.  Looking back, being at the course so much was a great way to meet every walk of life, especially when there is a Major that week. I’ve noticed that The Four Majors become a summer calendar or sorts.  You may not have the dates actually marked in your planner or have a Google Reminder pop up the Wednesday before a first round, but you know each Major is there; you can feel it.

They aren’t like baseball games where you leave after the 6th inning because your favorite team plays 70 more games.  There are only four, which makes them that much more special.  Having attended a US Open and PGA Championship myself, the things that come to mind are the people and the venues.  To walk the course and smell the trees, climb the hills and actually gaze across the sky to see a ball launched from the tee box is something every golfer should experience. Everyone in attendance becomes a friend and chatter among fans about their favorite players is in abundance.  Here are a few snapshots of each of The Four Majors and what makes them special. 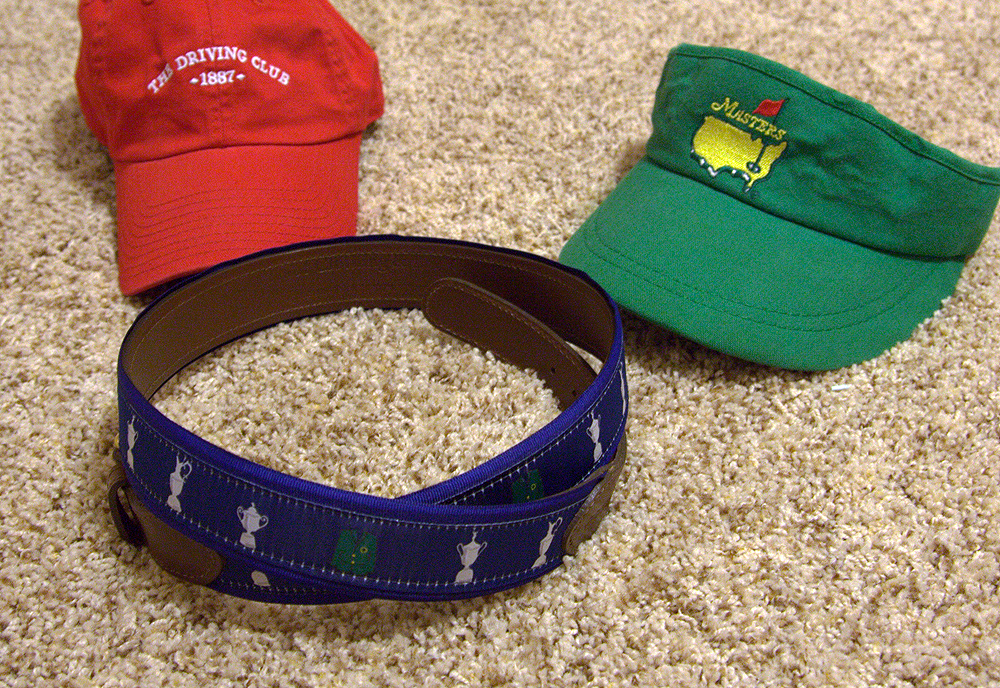 In passing, subtle comments like, “they’re through Amen Corner” lets you know it is April.  Its been said that the aroma of blooming azaleas at Augusta National Golf Club can be smelled for over a mile away.  Even though I can’t smell the flowers through my TV, when that first Masters commercial airs in early March I am immediately reminded that despite a dusting of snow from the previous night, its time to get my clubs out of the closet because spring is here.

The Masters, the first of The Four Majors, is held at Augusta every year and its trophy isn’t something one polishes or holds up to kiss.  It is a green jacket that allows the winner to forever play at Augusta National until the day he dies. Ask any pro golfer and I’m sure they will all agree The Masters is the one Major each wants to win the most.  Forget the prize money ($8 million).  Forget the wait list to become a member (it is invitation only).   Forget the course ranking (#1 in all of America in 2009).  It is about the tradition of the Wednesday Par 3 competition in which players have their children caddy for them and play along.  It is about pimento cheese sandwiches at the turn.  It is about a good ‘ole boy from Georgia, named Bubba, winning after hitting a 90-degree hook shot off of pine straw.  No other tournament has so many defying moments or is rich in so much history as The Masters and I wouldn’t want it any other way.

The US Open – June – US Open Trophy

The term “Moving Day” confuses your neighbors come June.  The second Major of the year, always finishing on Father’s Day Sunday, is The United States Open.  Arguably, this tournament is hosted at some of the toughest courses in the country.  Oakmont Country Club, for example, had greens rolling at a 15+ on the stimpmeter in 2007 and an average 18 hole score of 75.72.  For comparison, most well kept public greens roll around 8 on the stimpmeter.  On top of tough greens, players are challenged with tight rolling fairways and abnormally thick rough just off the first cut.  The quote “golf is 90% mental” holds more than true during the US Open.

In late July you and your buddies compete for the best Ivor Robson voice (I never win) on the first tee before your round.   The only Major that is played overseas is The Open Championship, often referred to as The British Open.  While this Major is played on several different courses which alternate locations between Scotland and England, the most famous is undoubtedly The Old Course at St. Andrews.  Pot bunkers taller than men, sporadic wind, rain and sun all in one hour, and a hole where players can play a bank shot off of an old stone wall (if they have to), are some of the obstacles this great course provides.  Shared double greens don’t even phase the pros.  It is a true links style tournament where “the home of golf” lives.

Right around Labor Day you and everyone else, golfer or not, now know that Vermont can produce a champion.  At the end of the summer, when every amateur golfer’s game is on top, the last Major arises out of the heat and sun that comes with August.  The PGA Championship is hosted on some of the most well-known and difficult courses year after year.  Pebble Beach, Oak Hill, Winged Foot and Valhalla are just a few clubs that will make ears perk up. Each course that is chosen is meticulously molded, lengthened, groomed and shaped years in advance so it meets peak perfection for the tour players who rise to the challenge.  Some groundwork however isn’t always definable, as Dustin Johnson found out the hard way in 2010. At Whistling Straights, Johnson grounded his club in what looked like a dirt patch trampled by fans. Rules officials deemed that worn out ground to be a natural bunker, one of 1200 placed throughout the course by legendary designer Pete Dye, and Dustin was given a two-stroke penalty that pushed him out of the playoff and into a finishing tie for fifth place.  Even though it’s only April, players are already visiting and scouting Kiawah Island Golf Resort in South Carolina, where the 2012 PGA will be held.  I’m sure Dustin Johnson will be taking extra notes. 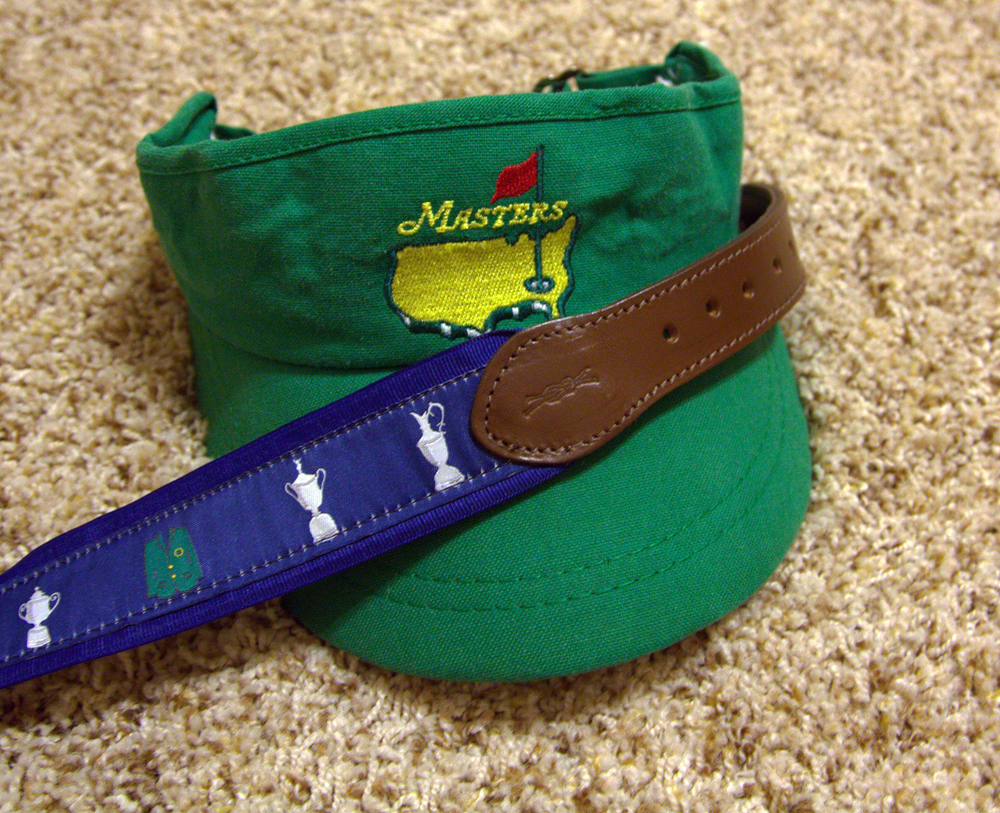 It’s not about being a three handicap or belonging to an exclusive club.  Everyone has hit off of a dirt patch of what should be a fairway and at one time or another you have tipped the cart girl more than the actual cost of the drinks.  It’s about being outside and challenging oneself while being with friends.  It’s the adrenaline you feel on the first tee and the chance to save par after knocking it close out of the sand.  Stories of great golf shots will always be retold back in the clubhouse, just as reenacting terrible ones will stir up laughter.  It is the game of golf and at the center of it all, what every player dreams of conquering, are The Four Majors.

To celebrate the release of the belt, use the code ‘MAJORKNOT’ for 10% off your purchase from Knot Belt Company through the weekend.  Fairways and greens…