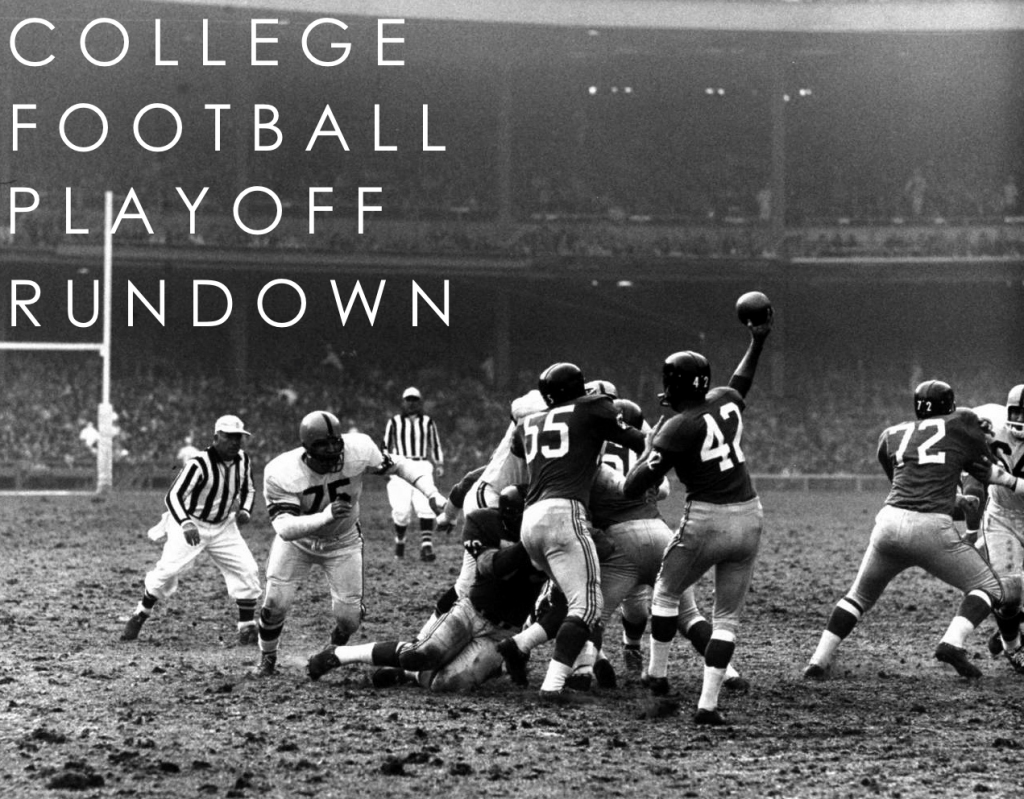 And then there were four (for now).  Since the playoff system in college football was implemented, it’s fair to say that it has worked.  It feels much more fair, and now there is a no-hold barred approach to winning from all four teams.  Does it dilute the other bowls?  Sure.  But that’s a product of over saturation.  Why are there 40 bowls?  I’m OK with it, because so-so college football better than anything else on TV.

Personally, I’d like to see the playoffs go to eight teams.  I’m sure the networks would agree, with all the money they make off the games, but we’d need a couple conditions.  First: NO conference tie ins.  Second: NO games on New Year’s Eve.  It is a horrible decision to play these games on the busiest night of the year.  There is NO reason not to play these games on new year’s day, which adheres to college football tradition.  Last: NO Joe Buck.  I don’t have to explain that.

Back to the games…We’ve teamed up with our good friends at State Traditions to do a rundown of each game.  Here are all the details, and what you can expect in the Peach Bowl and the Fiesta Bowl: 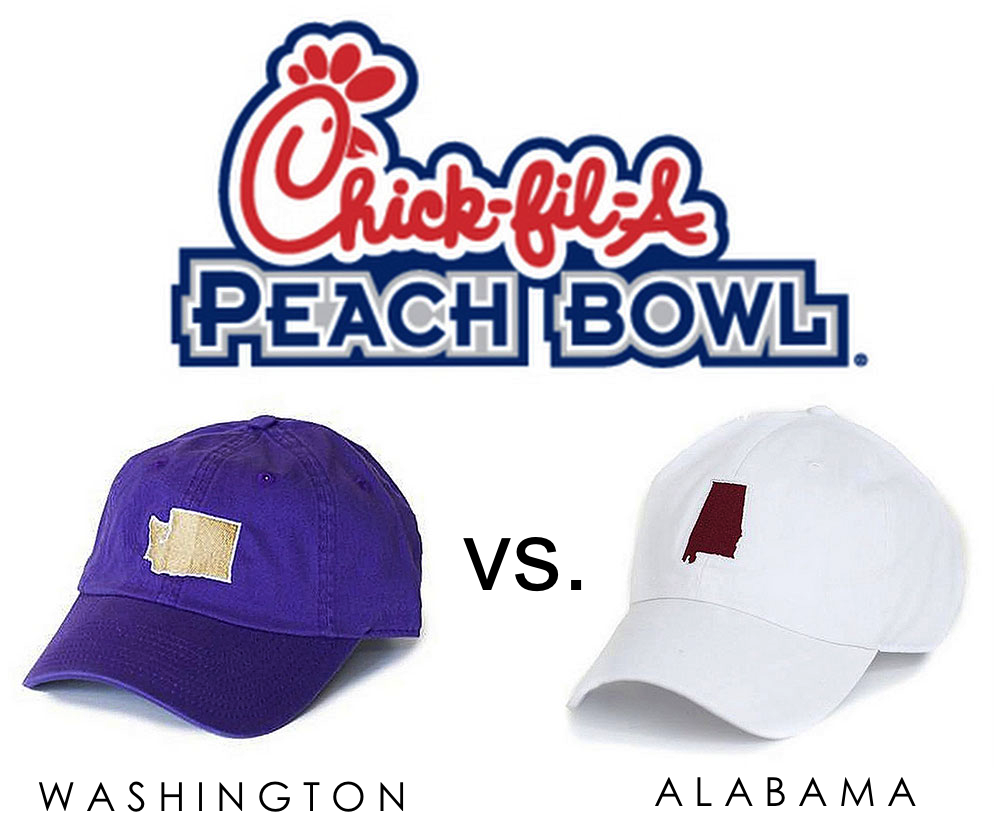 Remember the lead up to the 2012 National Championship where Lou Holtz was trying to convince everyone that Notre Dame had a chance?  Then, roughly two minutes into the game, it was clearly obvious that Alabama could have won by 1000 points.  Notre Dame was completely overrated and outmatched.  This game will have a very similar feeling.

Look for Washington to keep it close for a quarter, but they haven’t faced a defense like what Alabama puts on the field.   The Crimson Tide will transition to lock-down mode in the second quarter, and force the Huskies into panic mode.  Watch Washington desperately pull out all the stops and make mistakes.  You can’t do that vs. Alabama.  This game will prove the theory that defense wins championships.  Saban won’t let Kiffin run any fun plays.  They’ll go vanilla for the entire second half, saving all the goods for the National Championship. 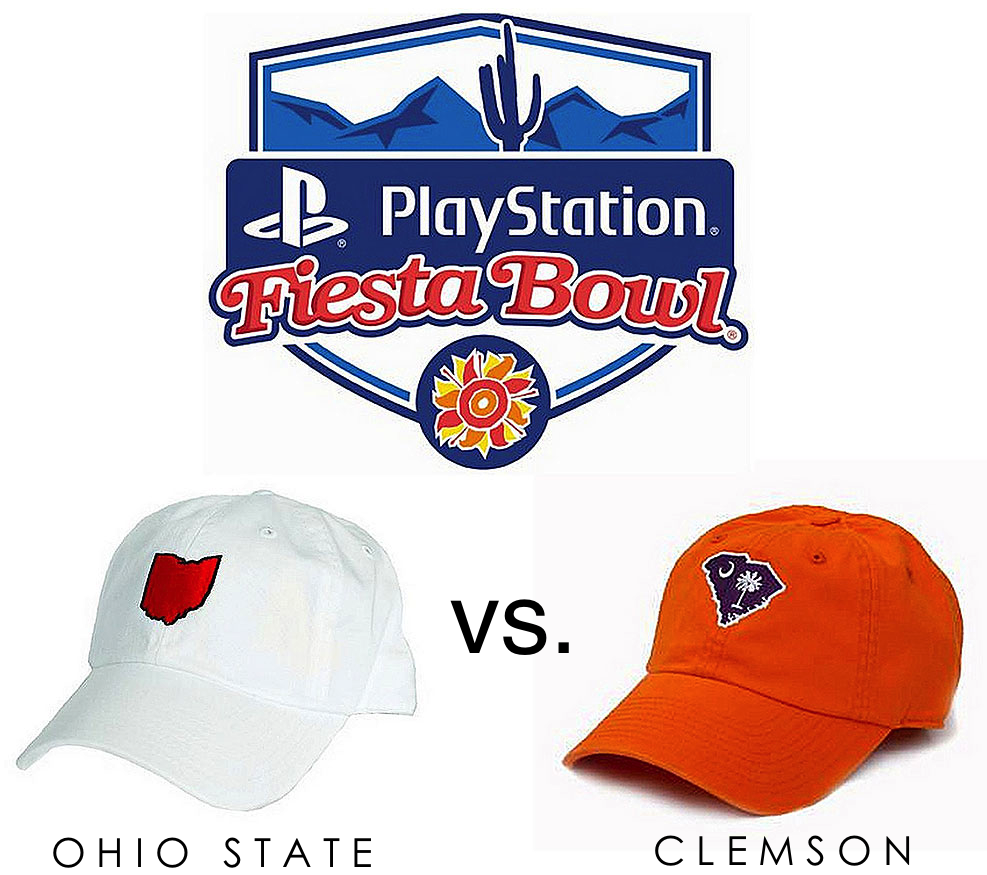 This game will be a good one to watch.  Because of stupid scheduling, it’s on New Year’s Eve, so the ratings are going to be artificially low.  The Fiesta Bowl features two teams that we can expect to be consistent top-10 teams for the next ten years.  Ohio State has an extremely well-rounded team, who have finally figured out how to win.  Clemson has some of the best athletes in the country, and a defense that is firing on all cylinders.

This game will start slow.  Expect a 17-14 score at halftime, with things opening up in the third and forth quarters.  While both teams match up very well, I’m going to give the edge to Clemson for two reasons.  First, Clemson will get the matchup edge at QB.  DeShaun Watson is the best player in the country (Heisman be damned).  He can make things happen that I don’t believe Ohio State has the ability to do.  Second, the majority of Clemson’s team almost beat Alabama in last year’s National Championship.  They have experience, and that loss to Bama is what has motivated them all year.