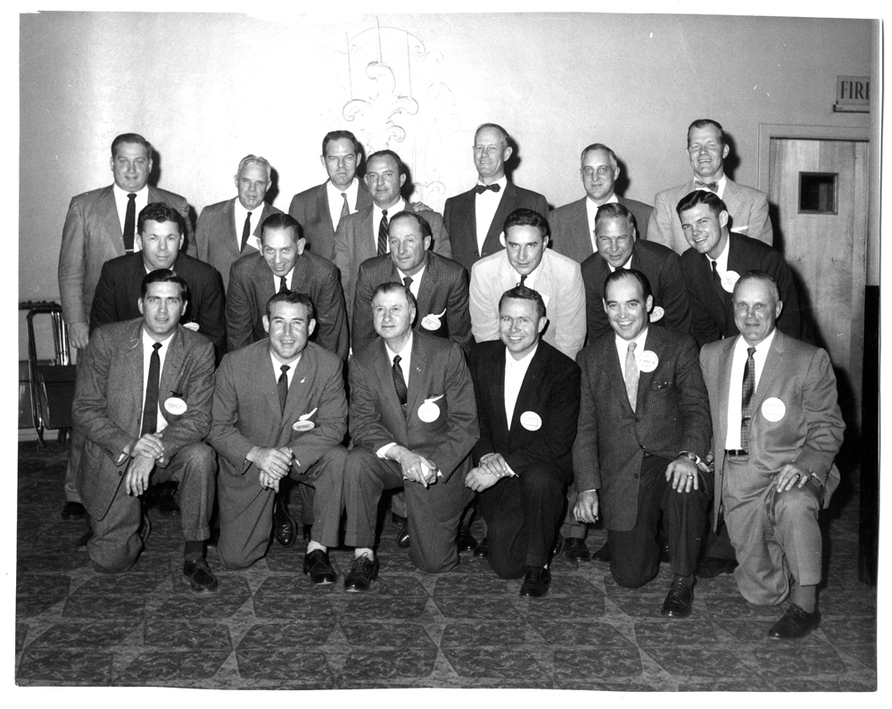 Folks: I’ve had the pleasure of Whit Ferguson’s friendship for many years now.  He is a fine gentleman, and is also serving as the President of the Touchdown Club of Atlanta.  I have been to a few of their events in the past, and decided to join this year.  So far, the experience has been outstanding.  Lots of folks that are passionate about football, and ensuring that players have an avenue for success after their playing days are over.  It’s all good.

Whit was nice enough to give a little insight to the club:

What is the history of the Touchdown Club of Atlanta? The club was founded on Sept 26 1938, making us the second oldest club of our kind in the country. On January 19th, 1940 we held our first annual dinner at the Ansley Hotel. Over 700 guests out of 6,000 applicants attended the event which featured “moving pictures” of four bowl games; The Rose, Cotton, Sugar, and Orange Bowls. Each game viewing was opened by comments from one of the coaches in each game. Some say it even rivaled the Gone With the Wind premier held one month prior, although my Grandmother who attended (and even danced with Clarke Gable) would disagree, I’m sure.

Who does the Club serve? The club exists to serve our membership and the best interests of the game of football. We recognize high school performances throughout the season and also give out the Mr. Georgia Football and Bobby Dodd National Player of the Year awards. Past winners include Heisman, Hall of Fame, Super Bowl…you name it…achievers. Over the last several years we have started to focus more efforts on helping kids after their playing days are over.

What is the benefit of being a member of the Club? Membership used to only be available to college lettermen and a few select individuals. That is no longer the case, although we do cap our membership. We have several events throughout the year that are member only events. Most recently we had our kickoff event at Capital City Club, where ESPN’s Tom Luginbill was our guest speaker. Onward Reserve made some awesome hats for us that we gave out to the members. This year we have five lunches with speakers including Bob Stoops, SEC Commissioner Greg Sankey, Les Miles and Tommy Tuberville.

Describe the College Football connection with Atlanta? Atlanta is, at least for 2017, the center of the CFB universe. This is something that has been decades in the making by people like Gary Stokan with the Peach Bowl and the crew that lured the College Football Hall of Fame here from South Bend. This year you have one of the best week 1 games ever in Alabama vs. FSU, the SEC Championship, Chick Fil A and National Championship game at Mercedes Benz Stadium, it’s easy to see how we are the leader in the clubhouse. My Grandfather played at Tech and later Southern Tech after WWII as well as officiated for 30+ years in Atlanta, so I heard a lot growing up about how important football is around here. If you look at recruiting we sit in the hot bed for top talent, so that fuels a lot of activity at many levels. This year alone 10 of the top 50 Seniors are from the state of Georgia.

How do you balance the ‘rabid’ nature of college football fans with the philanthropic nature of the club? I think it is important to have a mission beyond just great performance on the field. The game teaches so many great lessons. If we can take a lot of the principles and other attributes that are developed in football and help teach players how to apply those to life then we can get a lot of success stories from that.

What are you looking forward to in this years’ college football season? Too many things to list, but I will try. Definitely the Alabama-FSU matchup in week one. The NFL talent on that field will be insane and Im a big Derwin James fan. He could have a Woodson-like year and win the Heisman. I’m also fascinated with Alabama’s consistency and the job Nick Saban does. Curious to see how long he can sustain it at this level and does he lose two in a row? Can Lamar Jackson repeat with the Heisman? How will Harbaugh do with the inexperienced group he has. How patient will the Texas people be with Tom Herman? I also debate every year, at which point in the season do I switch to Bourbon? It’s usually around the time Lewis Grizzard started wearing socks again with his Gucci loafers.

Herchel Walker or Bo Jackson? Oh, wow. Great question. Growing up my favorite book was Bo Knows Bo and my favorite movie was 25 Years of the Dooley era, which was basically highlights of Herschel. I guess if I have to pick one, I’ll go with Herschel. Especially, in case my Father reads this, so I don’t lose my season ticket access.

Interested in becoming a member?  They are leaving it open for one more week, then you’ll have to wait until 2018…  Head over to their website and give it a look.