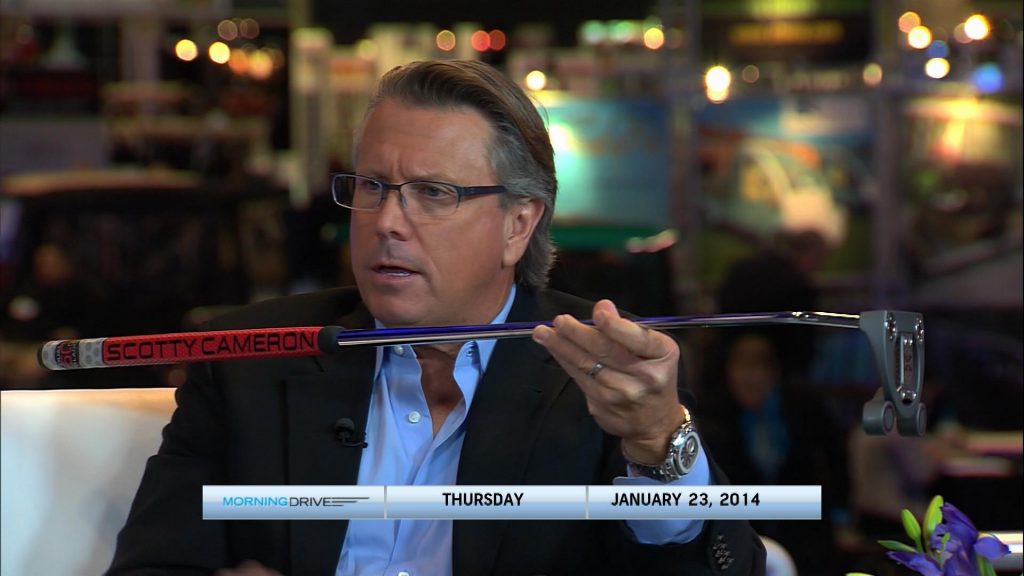 I have two Scotty Cameron putters, and I love them both.  I came to own them in very different ways.

The first Scotty Cameron I ever owned is a 2004 Studio Design 2.5 in the Black Pearl finish.  It has a curved neck which is a little weird, but whatever.  How I found this is a funny story.  As most of you long-time readers know, I’m a big Goodwill guy.  Back in 2011, I stopped in a random Goodwill on a whim, and was nosing around in the housewares section.  Sometimes you come across some cedar shoe trees, some Tervis Tumblers, or something extremely random.  It’s always worth a sweep.

Anyway, something in the sporting goods section caught my eye.  I saw the top of this: 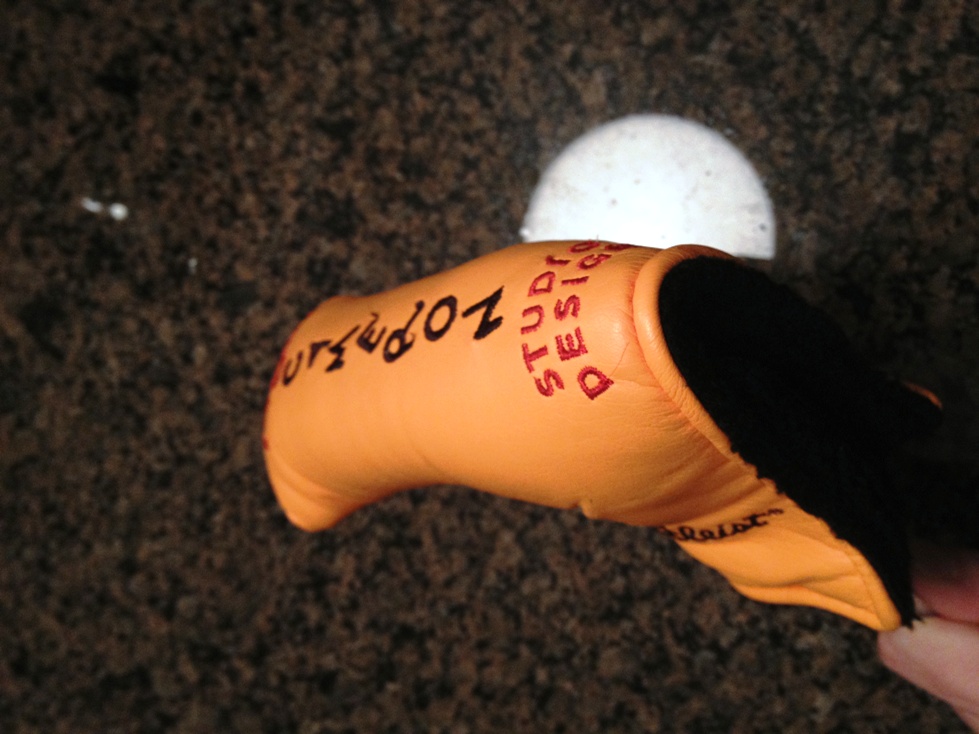 I thought to myself: ‘wow, a Scotty Cameron putter cover…’.  Not something you see everyday, and quite frankly, very out of place at a Goodwill.  I went over to examine the merchandise, and this is what was inside: 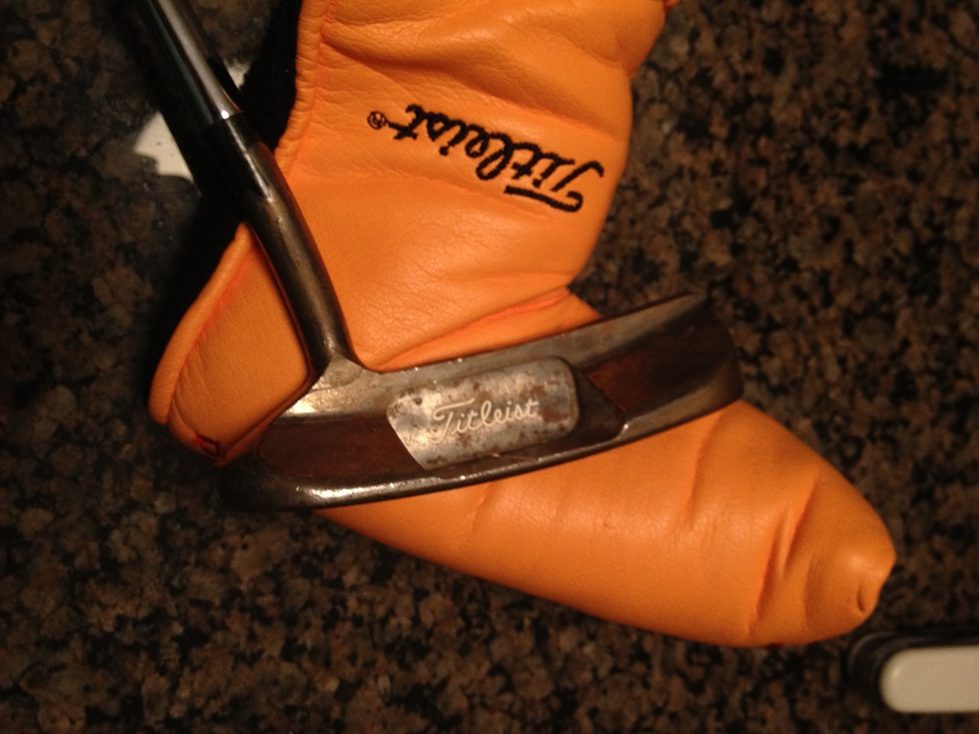 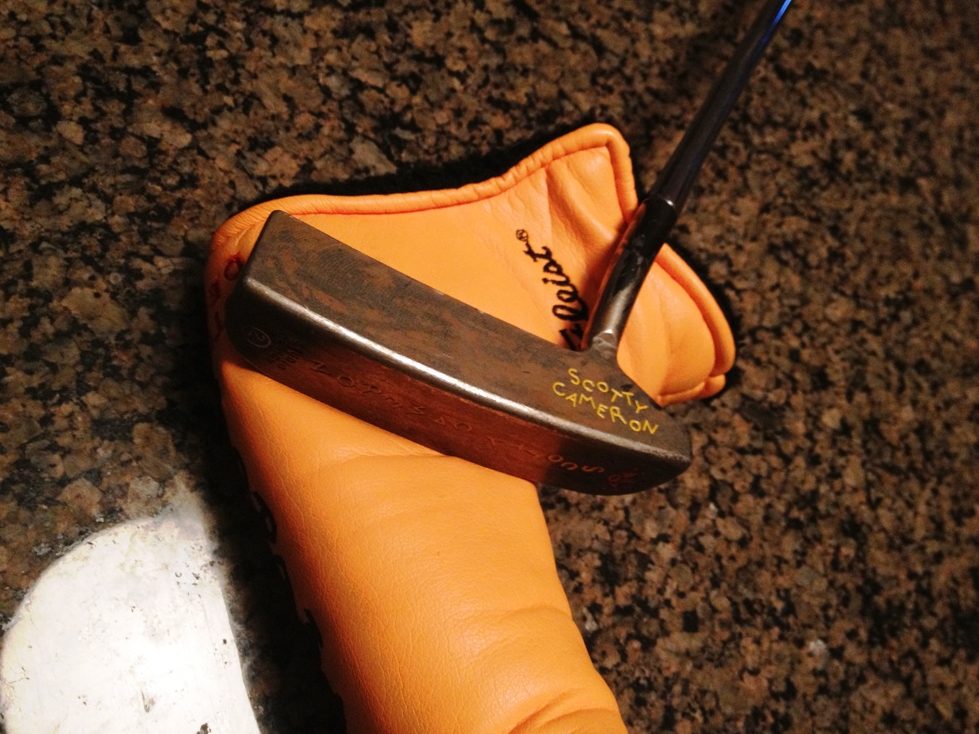 Needless to say, I was elated.  A Scotty Cameron Studio Design 2.5 putter in really good shape!  What a find, and at a Goodwill!  There was no doubt that this was coming home with me, but I was worried about the price… 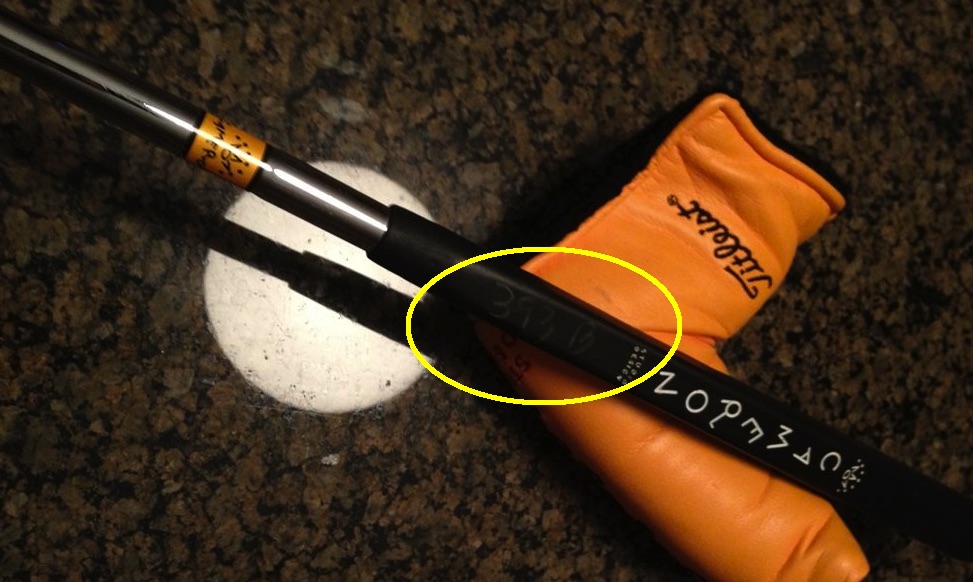 No, that’s not $393, which is what a new Scotty Cameron is going for these days (we’ll get into that later), but $3.93.  Under $4.  FOR A SCOTTY CAMERON PUTTER.  No brainer.  I putted with this for years, and really loved it.  I liked how the weight felt, reducing my deceleration, and really helping me with my distance control.  This putter stayed in my bag until I caught up with one of my oldest and closest friends and fraternity brother…

We graduate from college, get jobs, go to grad school, get married, buy houses, have kids, etc, but the friendship with fraternity brothers, especially those that were part of your crew/housemates/bail-bondsmen, never dilutes.  I got a random text from one of those brothers, and he wanted to get together and hit the links.  He had recently had his second kid, and needed to get out.  Obviously, I was happy to oblige.

A little back story: we played intramural golf together at our university representing our Fraternity, and we were actually pretty good.  I think we won the championship one year, and came in second another.  Wes and I were the ones that planned the golf outing at our fraternity’s beach formal every year (which usually turned into exactly what you think), we went to the Masters together, and the BellSouth/AT&T Classic.  We have a pretty serious golfing history together.

I met him out at a local club, and by the time we were off the driving range, it was like it was 1998.  We were back to our old selves, and his stress level was back at an acceptable clip.  After our second or third hole, I noticed he was using a really nice Odyssey putter.  Obviously he was putting like crap, but that wasn’t the point.  Back in the day, he had putted (like crap) with a really nice Cameron.  I asked him about it…

“What ever happened to that Cameron putter?’

‘You want it?  It’s in my basement.  There’s a new bourbon I want to try. Get me a bottle, come by with your wife for a visit, and it’s yours’.

One bottle of Angel’s Envy, and my Cameron collection doubled: 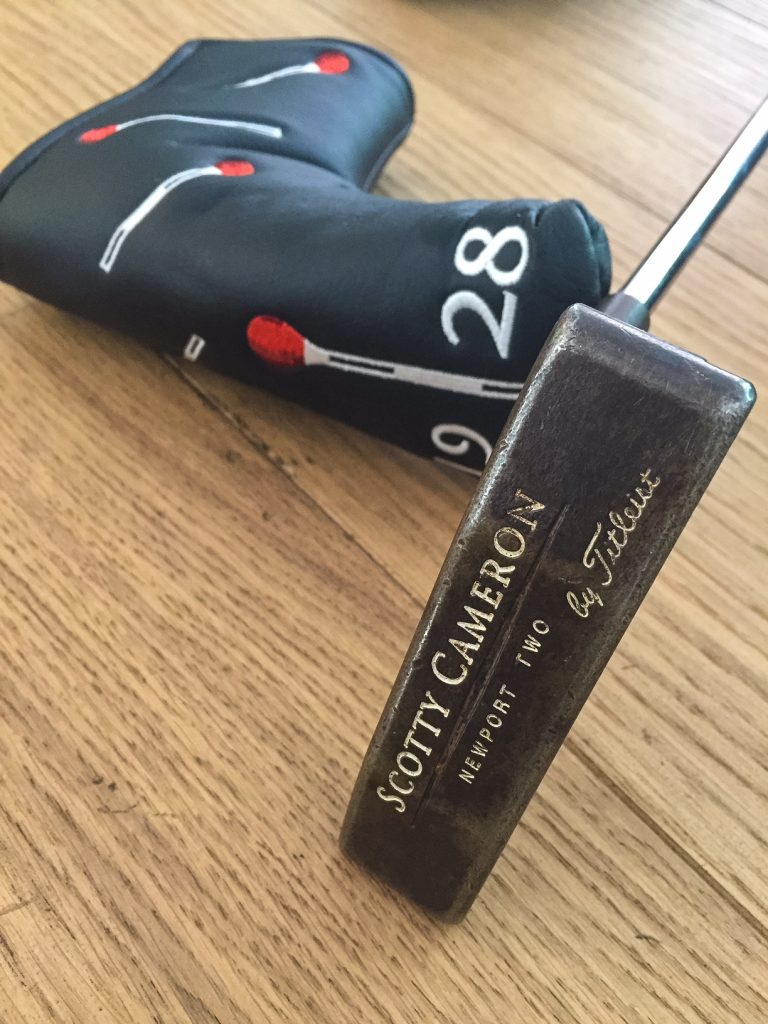 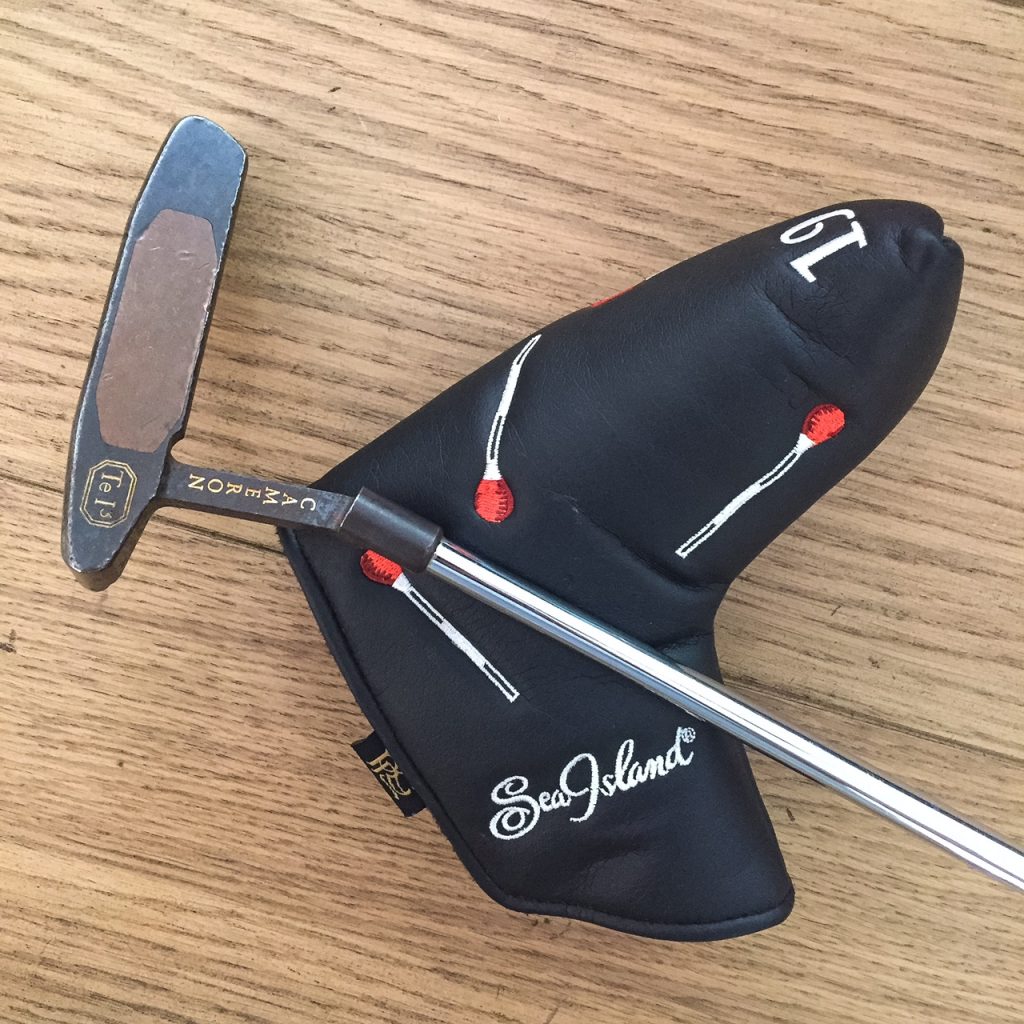 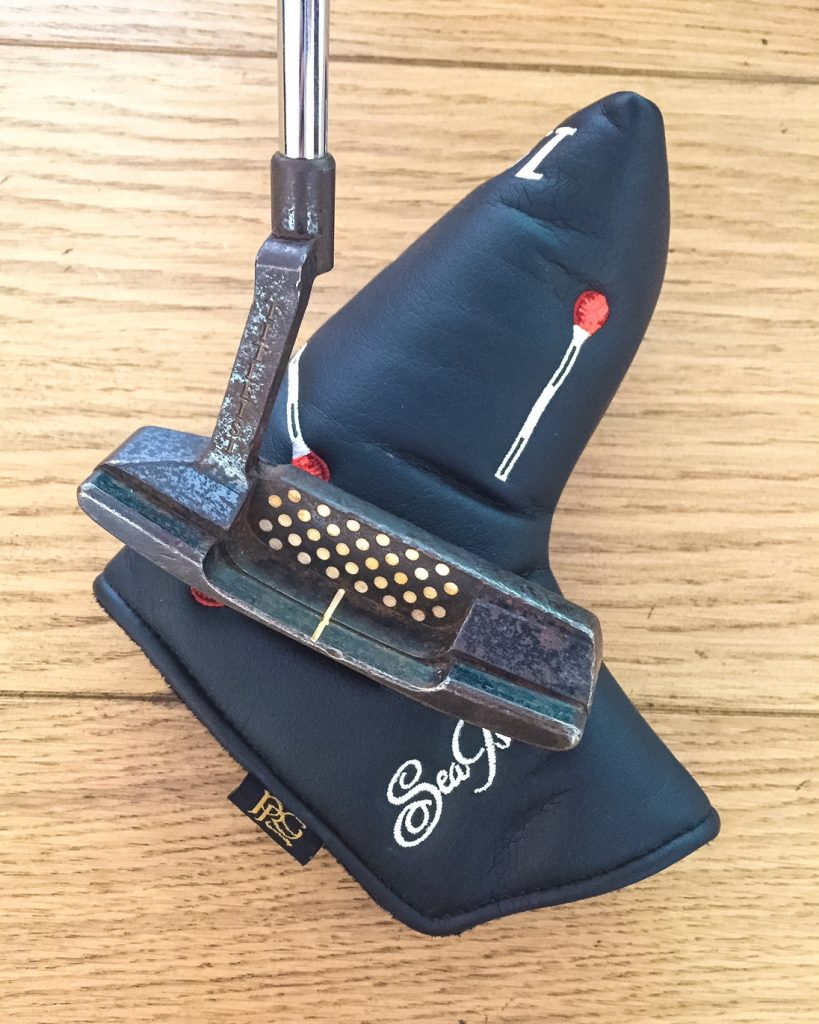 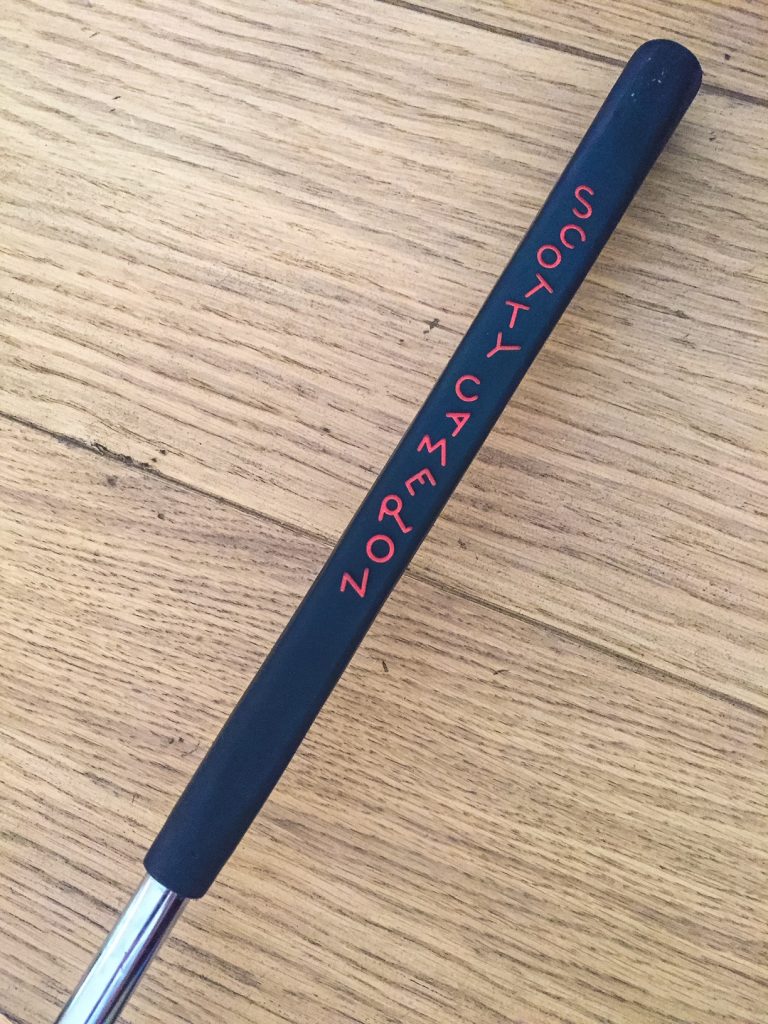 This bourbon-traded second Scotty Cameron that I added to my arsenal is a 1999 Teryllium Newport Two; the one with the insert.  I always admired it.  The grip was very deteriorated, and there was no head cover, but I didn’t care.  I put this dancing Cameron grip on and picked up the head cover from Sea Island.  I replaced the Studio Design putter that was in my bag with this one, and have been using it ever since.  Even though it’s 19 years old, I absolutely love this putter, and have no plans to replace it any time soon.

As with any big investment ($600 retail for those two putters for you, or $53.93 for me), I want to make sure they are usable for a long time.  The rust on both actually concerns me, but it’s not so bad that the putters are ruined.  I’ve done a ton of research, and have decided to send the Studio Design putter off to BOS Golf for a refinishing.  They get good reviews on the GolfWRX message boards, and I know a couple folks who have used them in the past with good results.

I am planning on doing what they call the ‘Satin Black Oxide Finish’,  which according to the description: ‘The satin black oxide option is in between shiny and matte in terms of glare.’  Perfect.  I don’t want shiny, and I don’t want matte. 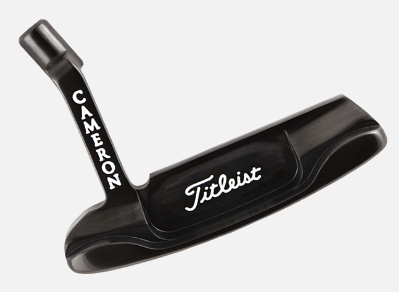 As for the paint fill, I want ALL white.  I’m going for the tuxedo look.  It currently has the red and mustard yellow paint, which I’m not really a big fan of.  The listed price for this is $75, but I may get it stamped, which will add a couple more bucks.

If all goes well with the Studio Design, I’ll send in the Teryllium Newport Two.  I may go with the same ‘Satin Black Oxide Finish’ or up it to the ‘Shiny Black Oxide Finish’, which will give it a little more shine, like it’s original finish.  Again, all white paint fill.  Maybe a stamp. 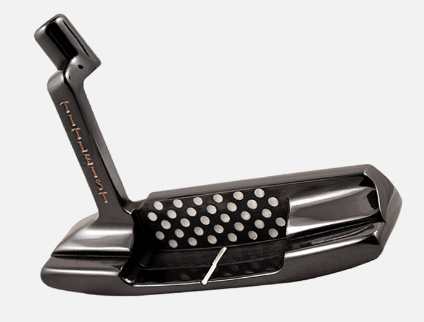 The biggest thing I’m concerned about with the Teryllium putter is all the dings.  It’s pretty beat up (see above), so it would be great if they could clean it up.  My ‘I stayed at a Holiday Inn Express last night’ opinion is that the dings are nothing a fine file and sandpaper couldn’t handle.  I don’t want it to be perfect, but it would be nice to have the top line cleaned up a little.  According to what I’ve read, they do take care of the dings, but I’ll verify before sending.  The listed price for the Shiny Black is $70, but I’m sure it’ll come out a to be a little more.

Obviously, as I wax on about these babies, you can tell I’m pretty excited.  I’m ready to have both of these restored and back in the arsenal.  To me, putters aren’t disposable (like wedges).  They become a part of your golf story… and hopefully never find a home at the bottom of a lake.  These two putters each have a good story.  How I came to own them, how they’ve helped my confidence in putting, in turn lowering my handicap, and now giving them new life.  It’s all ball bearings and value proposition.

Chapter 3: What is going on at Scotty Cameron?

Given all of the above, I have to touch on this.  Have you seen the recent Scotty Cameron putters?  They all look like they came from The Jetsons, and they retail for $379(!).  Looking at this from all angles, I can’t see any reason to spend this type of money on a putter.  I am a HUGE fan of capitalism, and 100% believe that price should be what the market will bear, but that is so far beyond what I would be comfortable paying for a new putter. Golf is expensive enough.

How can you overcome this retail gugerkont ?  Find one second hand and send it in for a refinishing if needed.  I am much more comfortable finding one at a second hand store or on Ebay for $150-$200, then spending another $100 on refinishing, a new grip, and a new headcover.  Not to mention that you get to pick the putter you want, and can stay away from the new line.  Unless you are into that sort of thing.

This is the Scotty Cameron line since 2011: 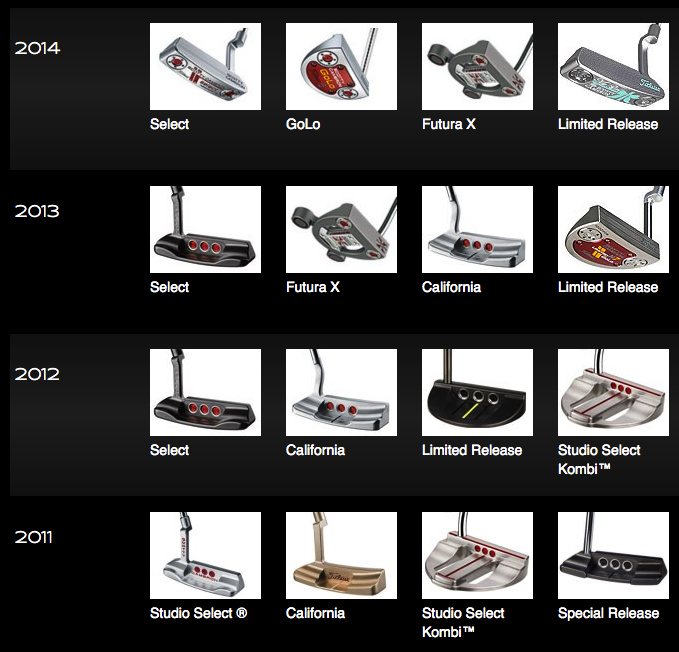 There is ONE putter in the above collection that I would consider: the 2011 California.  Clean lines, no bulb-looking eyes, and not overly logo’ed.  The rest of these look like some sort of torture device or an illuminated traffic signal used at the airport.  They scream new money, new golfer, eager to impress. I’m a traditionalist, and wouldn’t be caught dead with one of those in my bag, simply from an aesthetics perspective.  It would throw off my chi.

Keep in mind that Jordan Spieth, the number one putter in the world, uses an old Scotty Cameron.  He’s been using it since he was 15 years old. 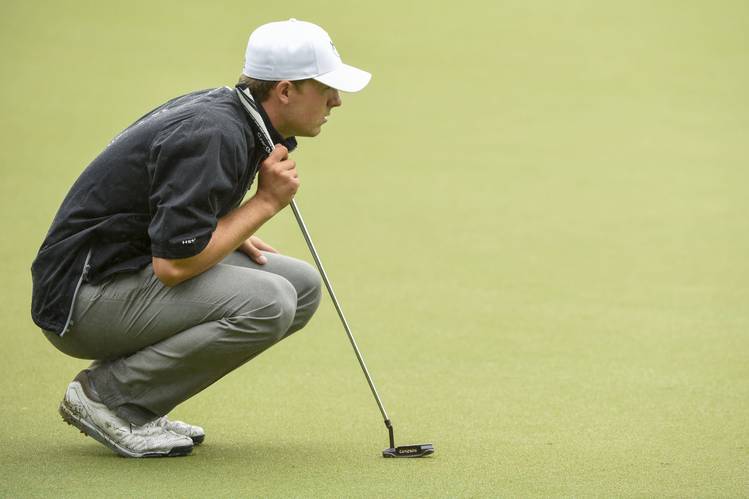 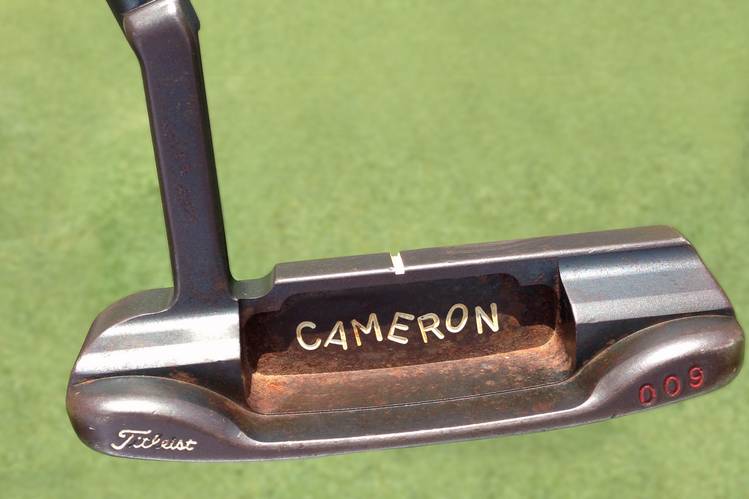 I get the impression that Spieth is the type of dude who doesn’t do ‘flashy’.  And his chi seems to be in sync.

Not that they are listening, but I sure wish Scotty Cameron would include some sort of traditional blade putter each year.  It works, most folks use them, and I’m sure they would sell.  Their argument would be ‘why would we make a putter that someone would keep for more than a couple years?  We want them to buy a new $379 putter every year!’.  Such is life.  I try.

The next battle in the golf war is to take on the current golf attire situation on tour and at your local golf shop.  We are going to dig in.  Deep.  I’ll leave you with this: 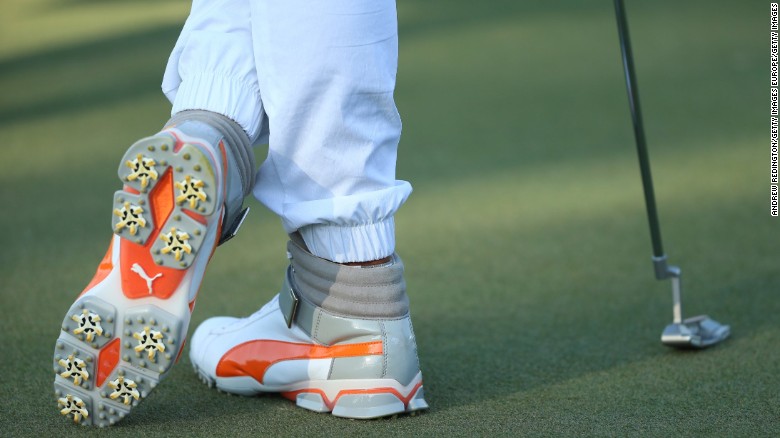