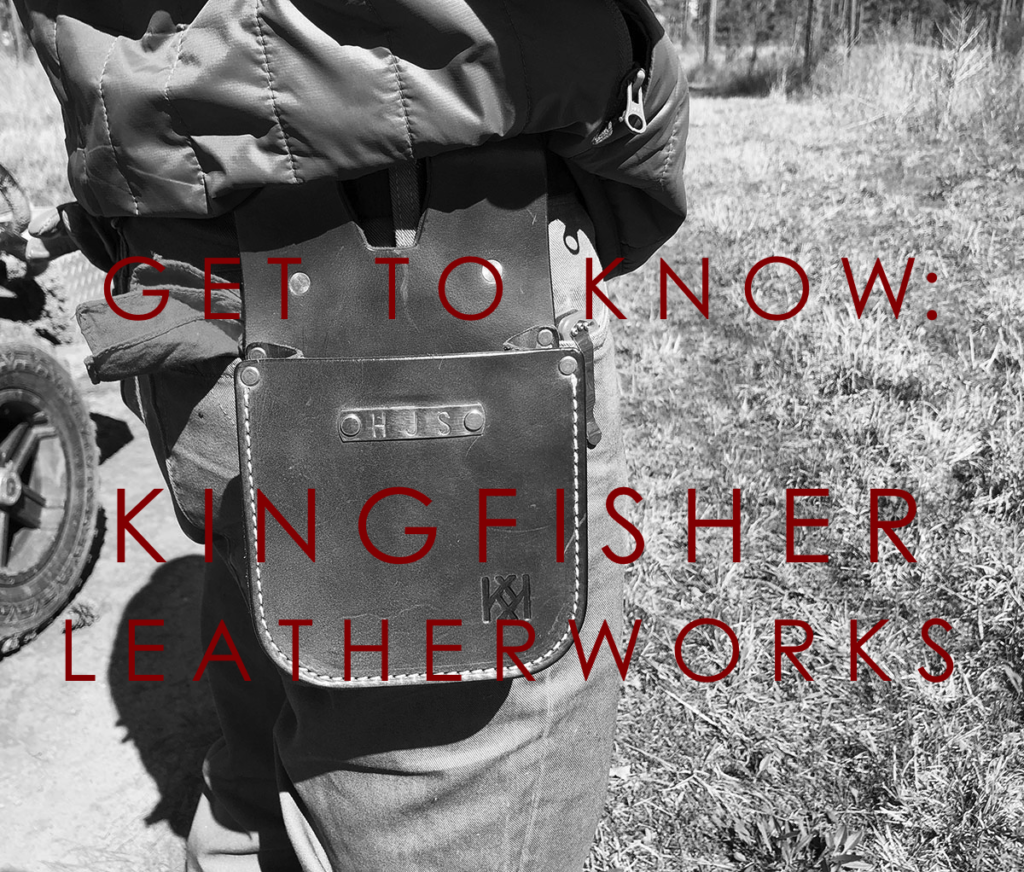 SEWE is such a pleasure, and provides the opportunity to meet some outstanding people, as well as some world-class craftsmen.  Luke Kolbie of Kingfisher Leatherworks is a prime example of a rock star that’s doing amazing things.  Luke is a recent high school graduate who is extremely skilled at leatherworking, and started Kingfisher Leatherworks as a means to get his wares out to the masses.  After seeing his shell cases, belts, and bags at SEWE, I was really excited to introduce his company to all of you:

How did you get started in leatherworking? I began leatherwork in 2011 at the age of 12. A good friend had some Kudu leather he had brought back from Africa and gave it to me for use in my numerous projects. Up until that point my hobbies had been working with wood and metal to build objects I could otherwise not afford if I bought them from someone else. Dad and I had tanned a few hides, beaver, deer, fox and gator for fun and his general talent for building and design is probably where I get mine. I remember he made me a satchel from our tanned alligator for Christmas and that was definitely an inspiration. 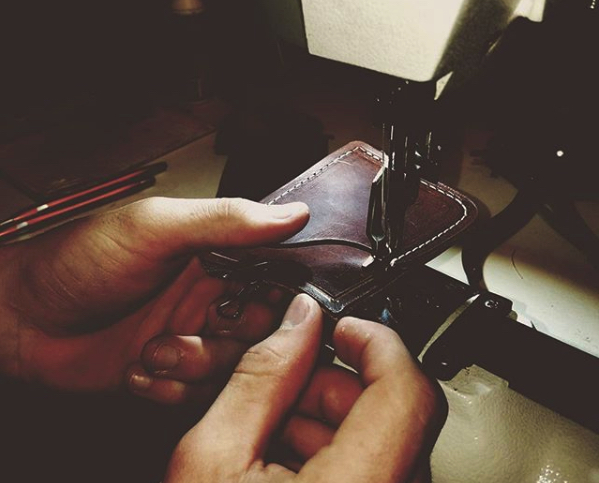 I was homeschooled all the way through to the end of high school because I was traveling several months out of the year working on campaigns and as a staffer with Teenpact Leadership Schools. This kept me out of traditional sports so I spent all the more time hunting, fishing and working with my hands. In 2013 I began shooting on a 4h trap and skeet team and it was at this point that I realized how bad modern sporting equipment has become. I bought a $20 set of second hand tools while on an elk hunt in CO, and a few hides from Tandy in Atlanta. I set about designing a leather bag to hold shotgun shells comfortably while in the field or on the range. The main advantage was that the shells didn’t swing around like a floppy canvas bag and the bag’s rigidity didn’t pull your pants down.

Friends saw the bag and started commissioning them and that’s when it really started. The next few years would see the Cartridge bag refined time after time to its current version. I soon found that hand stitching every single piece was unsustainable and it left my fingers constantly raw and cut up from the needles and pulling thread tight. Instead of using the money I had saved on a vehicle, I argued that buying a sewing machine would pay for itself and a vehicle over time. I ended up buying a 250lb behemoth of a saddlery machine since industrial size machines would not sew the thicknesses I wanted to use. The dealer I bought it from also recommended a US tannery and I began the use of American hides in my products that continues today. I found out later that my Great Grandfather who died just before I was born, was a cobbler and his father before him. They had shops in Decatur and Priceville, Alabama and had learned the trade in Louisiana in the years leading up to WW2. What I would pay to hear their stories or find their equipment! 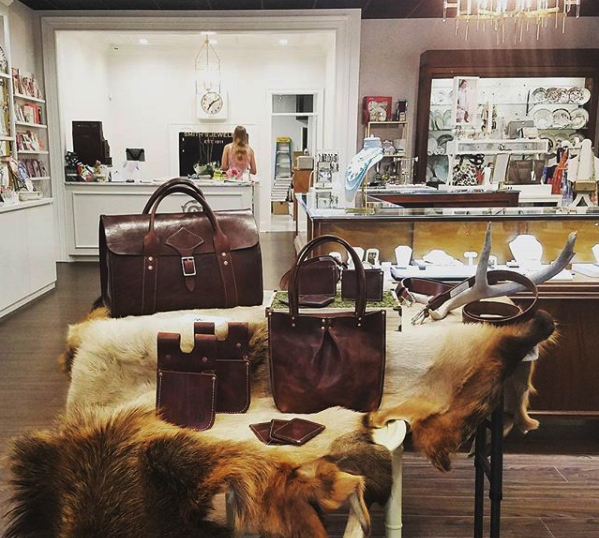 What made you want to start working with leather? With the few pieces of leather I was given in 2011, I began making small projects and doing a few commissioned pieces. I won an award at a local art contest, but leather was mainly one more hobby in a list of many. After I bought my first tools my options for leather projects expanded. I began purchasing leather mostly because I wanted to make quivers and gear for my traditional bow building hobby! Having no formal training gave me the benefit of having to innovate without the bias of being taught with a “thats the way its always been done sonny, and its what I am gonna do it till I die” type mentality. It had the negative effect of forcing me to re-invent the wheel even on simple projects. I began studying historical bags and methods, lots of youtube and even more trial and error. To me it was about the self satisfaction of having made something useful with my own two hands. It also made friends and family super happy when they would unwrap something I made at Christmas or birthdays. 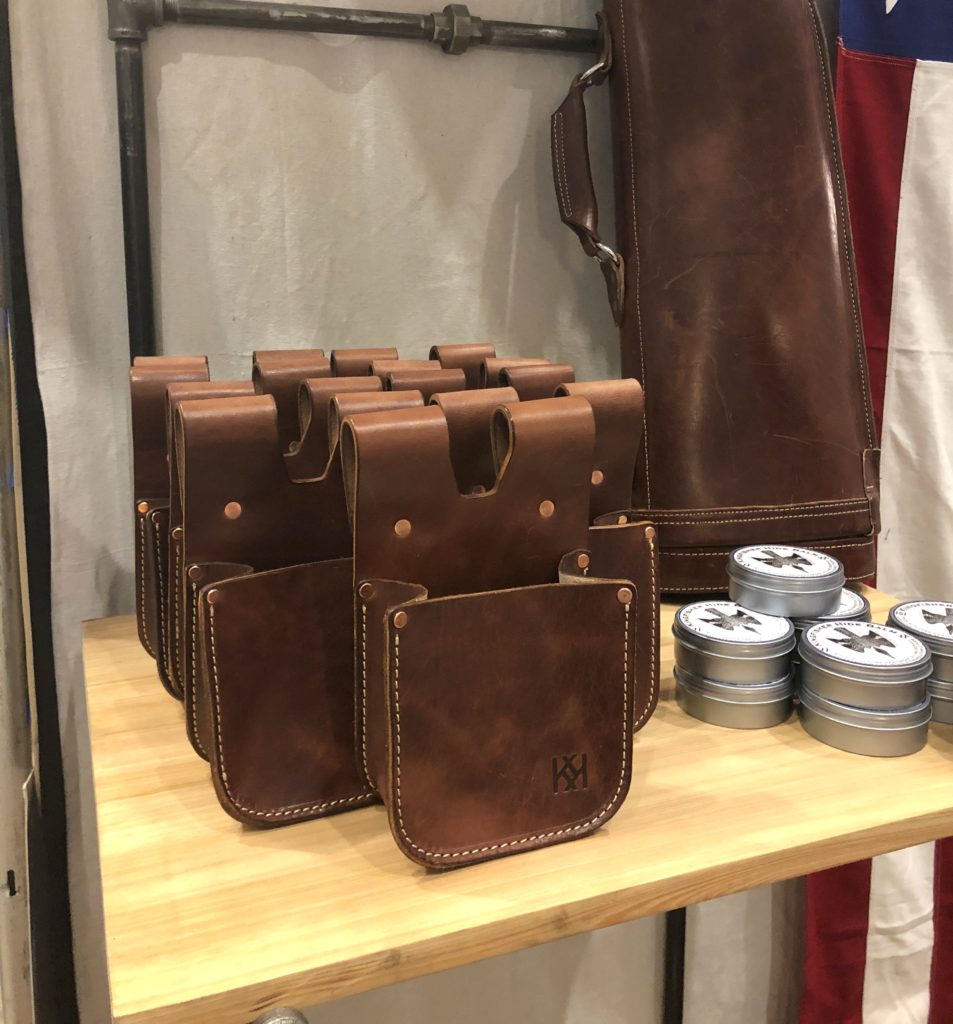 What are the principles you use when creating products? Most of my principles for leather and life can be summed up in the Biblical command of “In everything you do, do it unto the Lord.” When I hand over one of my products to its new owner I want to look them in the eye and shake their hand knowing that twenty years down the road I will be able to do so again without reservation. It makes my blood boil when a refrigerator breaks two months past its warranty, or a pair of shoes, or a truck or a house or anything. We have, by our own American obsession with getting things as cheap as possible, cheapened our society and set a social norm of buying junk, anticipating it being put in a junkpile, then repeating the cycle. Owning my own company has provided me with the opportunity to break that mold and provide a product that will last as long as I can possibly find a way to.

Quality in and of itself is not what I would call a principle, though it is a major part. At age 7, my dad bought me a Gransfors Bruks Wildlife Hatchet. I wore that thing out chopping down trees and as I got older I began to have a real respect for its construction. I started oiling it and sharpening it and being very careful about which friends I let use it. I still have that same hatchet today and use it like the first day. Gransfors became my role model for quality when I started Kingfisher.

Honesty is the biggest one. My name, my mark is put on every bag and belt. My reputation as a man and businessman is one of the most valuable things I possess; more valuable than any sale or business deal. Our warranty stems from that. I make each product to last and believe in it enough to say that if there is ever a problem I will handle it and make it right. That’s been my policy since day one and I have never had a reason to regret it. I am also proud to say we have never had one of our products returned to us with an issue.

Americanism is another one. I have spent a lot of my time trying to make a small difference in this country by assisting good men in running for office. Now that I own a company I want to continue that passion in a different way. People often say that using an American leather doesn’t make a difference to them as long as the bag itself is made in America. I disagree. If I am going to tout my products as American made I at least think the main material should be from here as well!! I want to be apart of the remnant who not only make their products here, but can also say that no other nation has a product which can rival ours. Going the American made route is not the most profitable by far, but it gives me pride in what I am trying to accomplish. 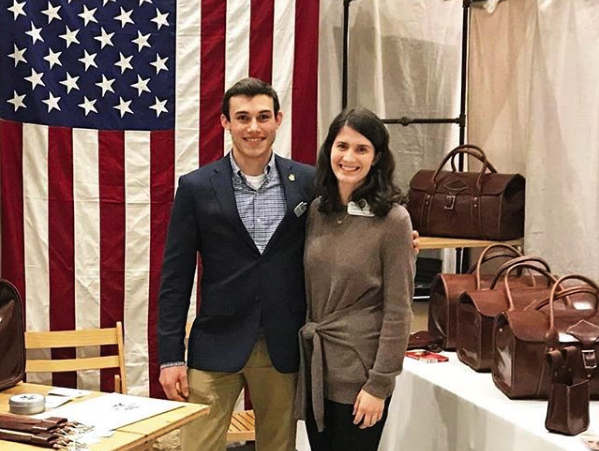 Who are Kingfisher customers? I describe the Kingfisher customer very loosely as the Garden and Gun Subscriber. They are businessmen and professionals who understand and value craftsmanship, quality, history and design. My philosophy is that I never want to sell a product that I know could be better. I do everything I possibly can to make the best and then I sell it for what its worth. 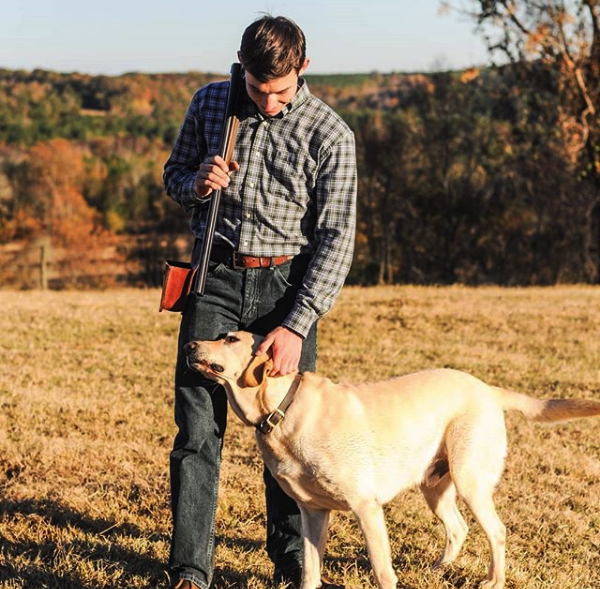 What’s coming in the future from Kingfisher? Exciting things! I have been designing our Queenfisher line for years and I am really looking forward to putting that in production. Speed bags and gun cases for bird hunters, Briefcases and business items, Bags for outdoor photography, exclusive hardware… Lots to do and not enough time to do it!

What do you like to do outside of creating leather goods? I love hunting, wingshooting in particular. Skeet, trap and sporting clays. I still enjoy shooting and building my traditional longbows. Sport rock climbing. Backpacking. Travel. Blacksmithing and metal casting. Carpentry. Eating for sure, I think that’s officially a hobby for me! 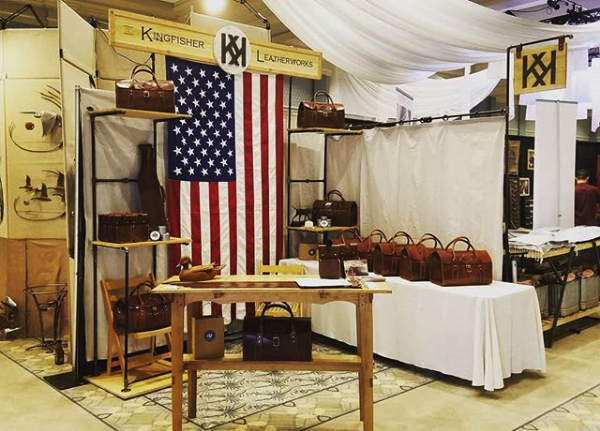 Luke was nice enough to send me one of their handmade Cartridge Bags and belts to experience.  I took it for a ride last weekend on my last quail hunt of the season, and from a functionality perspective, it’s great.  A box of shells fits perfectly in the pouch, and the belt loop cutout is really smart.  It keeps the bag right where you want it. 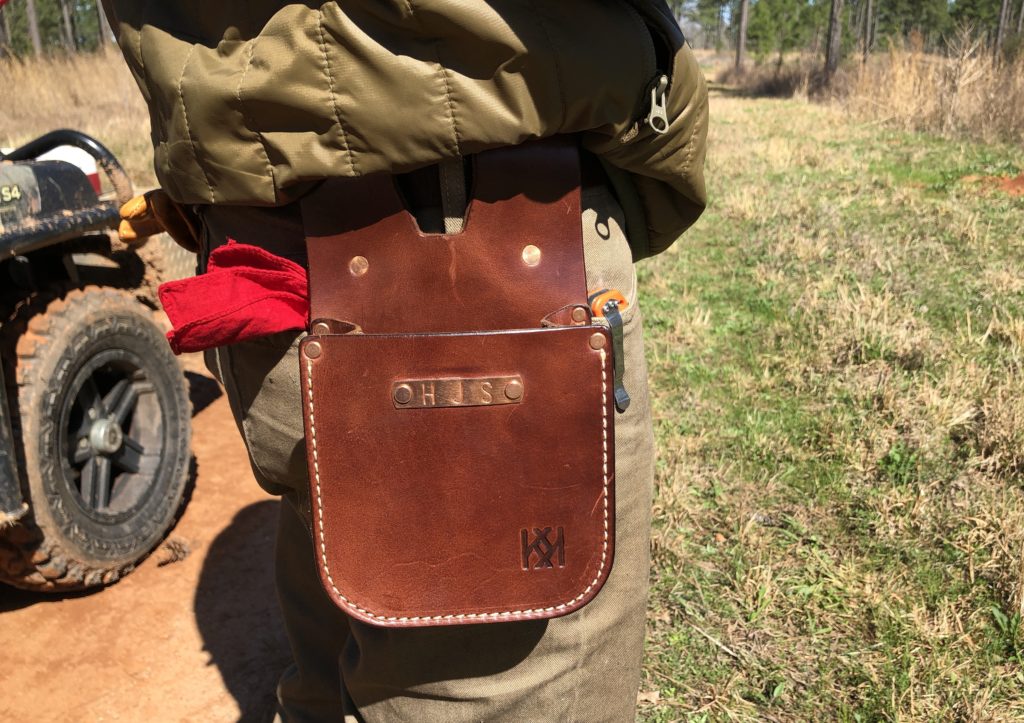 But the functionality is only part of the story.  It’s hard to capture how nice the leather is…it’s as thick as brindle leather, but it’s much more pliable and oiled, and has an ‘almost’ broken-in feel.  The leather will age extremely well.  The Kingfisher logo is subtle, and the contrast stitching is a nice touch.  The copper rivets give it an elegant feel, and the engraved solid copper tag makes this a heritage piece.  I opted to get my son’s initials engraved, with the intention of passing this along to him when it’s time.

The price point ($155) is right where you’d expect it for a cartridge bag this nice.  It’s a very nice item that will patina well over time…having a lot of stories to tell.  I’m a personalization guy, so the copper tag is right up my ally.  Don’t like initials?  Have the year engraved instead.  Think about this as a gift, or treat yourself.  I highly doubt you’ll be disappointed.