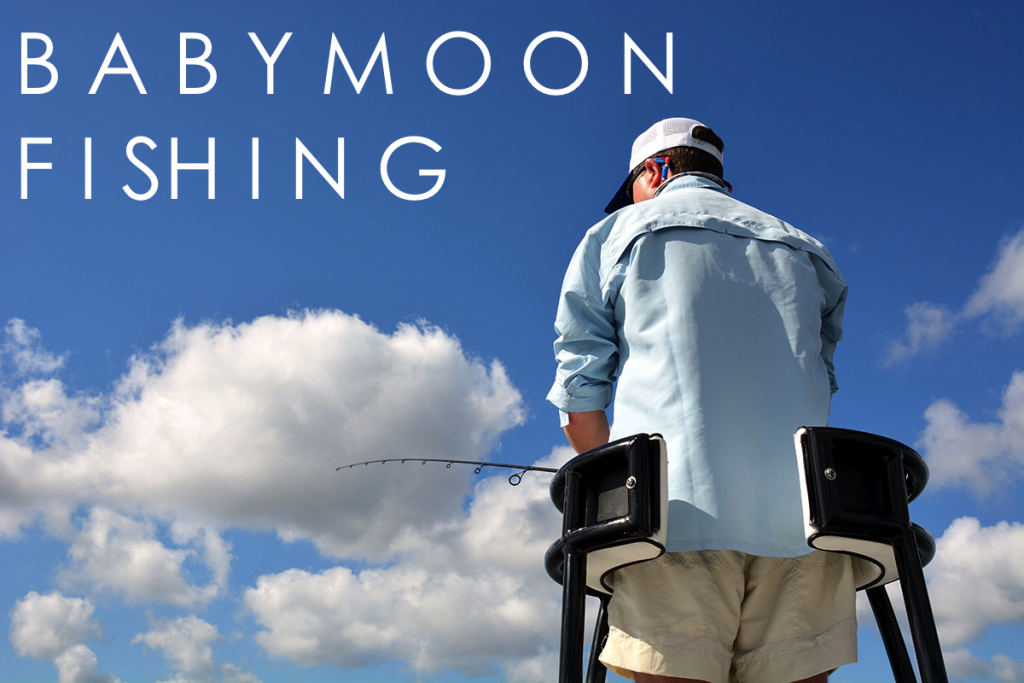 I have an amazing wife.  Mrs. RCS and I expecting (any day now…), and celebrated the addition to our family with a Babymoon down to The Pearl in Rosemary Beach (see the review here).  About a month before we went down, Mrs. RCS send me this text: “want to go fishing while we are babymooning?”.  My response: “yes.  I’ll handle”.  While I was really excited about the babymoon, I could tell she was working to ensure that I had a good time as well – given her limitations.  Mrs. RCS loves to fish, but I was a little worried about her going.  Being on the water for 5+ hours may be too much for her…

I haven’t done much chartered fishing down in the gulf, so I didn’t really know what to look for.  I came across Shallow Water Expeditions, and really liked what I saw:

I was looking to do some backwater/bay fishing, mainly because the water wouldn’t be so rough.  I didn’t really care what we caught, I just wanted to catch some fish, and give Mrs. RCS the ability to catch a few as well.  Other than that, I wanted good weather and low wind.  Two things that are uncontrollable.

I called and spoke with Jennifer.  I told her that I was bringing a 32 week pregnant woman fishing, and that we wanted to catch few.  We talked about what would be best for us: calm waters, multiple types of tackle (spinner and fly), good weather, etc., and decided on a flats boat in West Bay.  The cost for a half day was $400, which includes pretty much everything: guide, tackle, water, snacks, and a good attitude.  I scheduled us for Saturday morning, and put down my deposit.  Needless to say, we were both really excited.  The videos on SWE’s website got Mrs. RCS and me really fired up.

On the Friday night before, Mrs. RCS and I were at the rooftop bar at The Pearl.  She was enjoying soda water and lime, and I was on my tenth transfusion, when our guide Jack called to set up a time to meet in the morning.  We set a 7AM meet at the launch under the Hwy 79 bridge on West Bay.  We were set to jet.  We met Jack the next morning, and were ready to rock.  Our chariot: 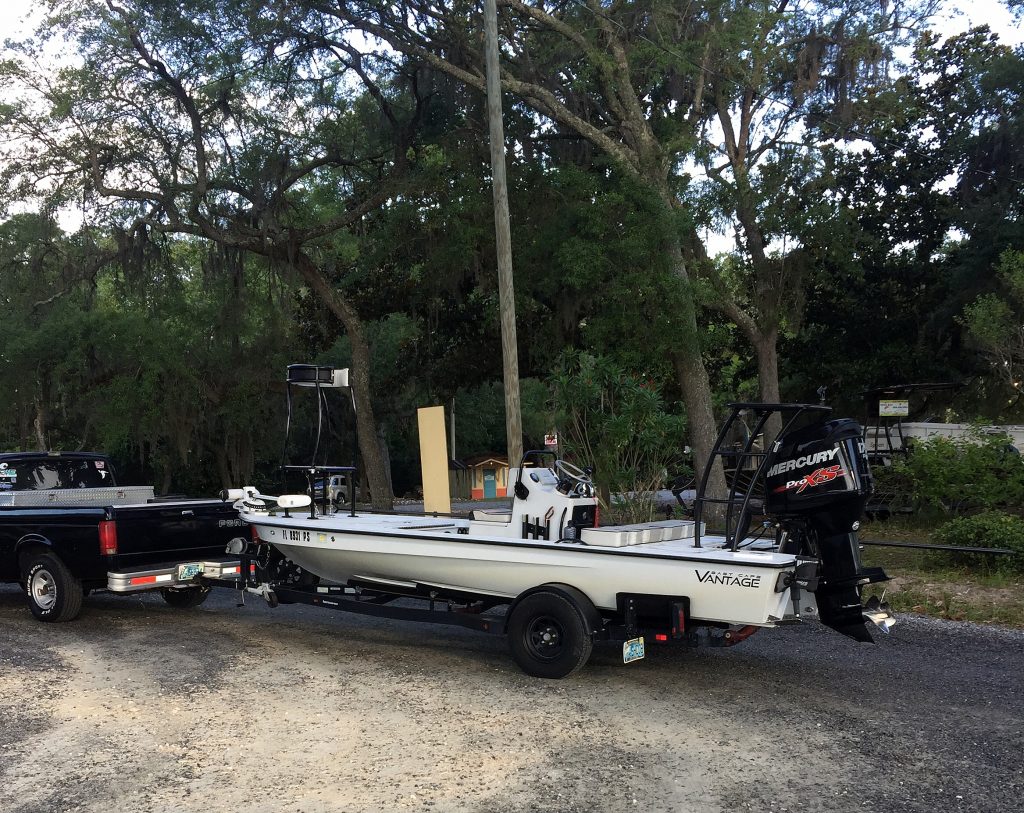 As we got the boat in the water, Jack did a really good job of feeling us out, especially knowing that Mrs. RCS was 32 weeks pregnant.  He was a super-cool guy, and I knew that we were going to have a good time.

We talked about fishing abilities, boat comfort (for Mrs. RCS), timing, and stocking the boat.  We let him know that we didn’t really care what we caught, just that we caught a few.  I was interested in catching reds.  We wanted to try and stay on calm waters to protect Mrs. RCS.  We didn’t have a schedule, and that we would go as long as Mrs. RCS could go.  With stocking the boat, we brought a few snacks and waters, and so did Jack.

With that, we were off.  From the map below, we put in under 79, and worked our way along the north end of West Bay.  For reference, we finished up in the flats just above ‘Lagoon’ of Grand Lagoon: 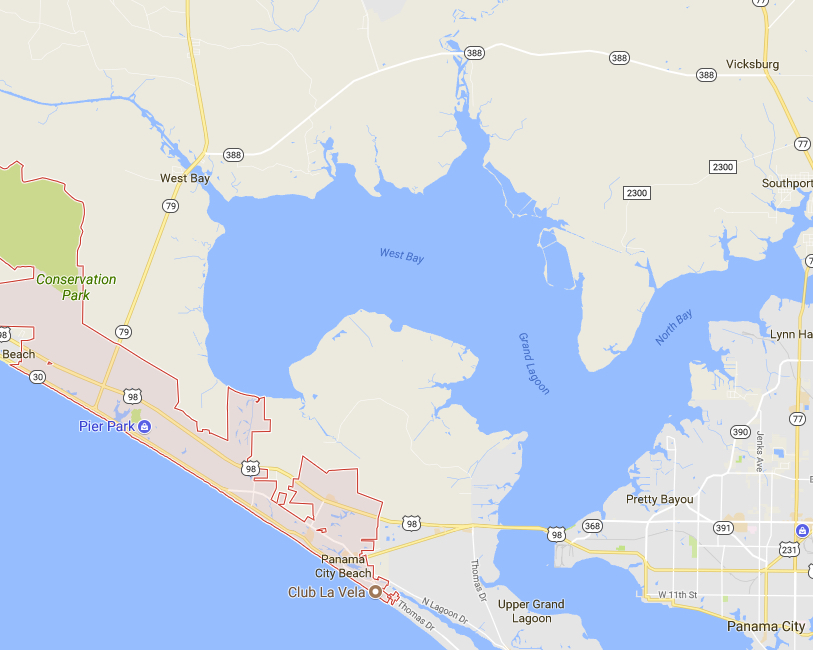 The views in West Bay were breathtaking.  We commented multiple times that a boat ride would have been worth the money: 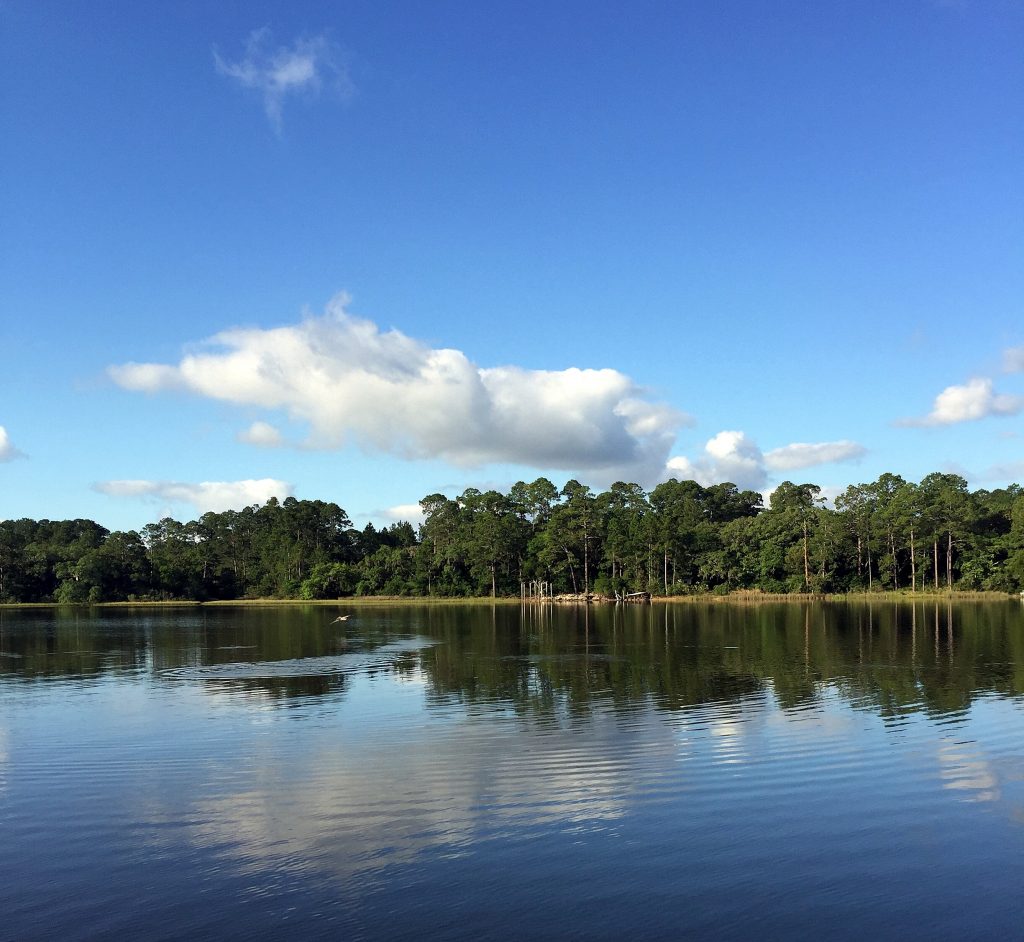 Our first stop was on these flats.  I started with a spinner rod as the breeze was just enough to make me uncomfortable with a fly rod (and two other people on the boat –  I didn’t want to pierce any ears or noses).  I actually had quite a few hits, but didn’t land any reds.  Jack identified very quickly that my technique was a little off.  I was fishing them like you would fish for bass.  Not the best way to fish for reds.  You have to keep working them or they will spook, and you have to let them run a bit before setting the hook.  I was doing neither. 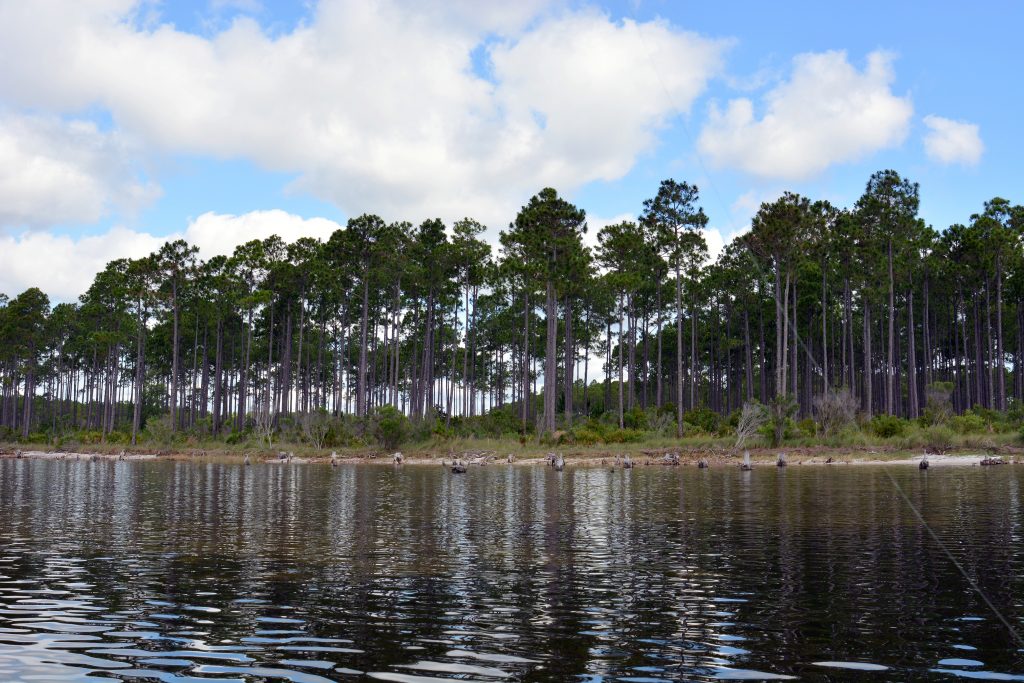 As the morning heated up, we moved to some deeper waters. 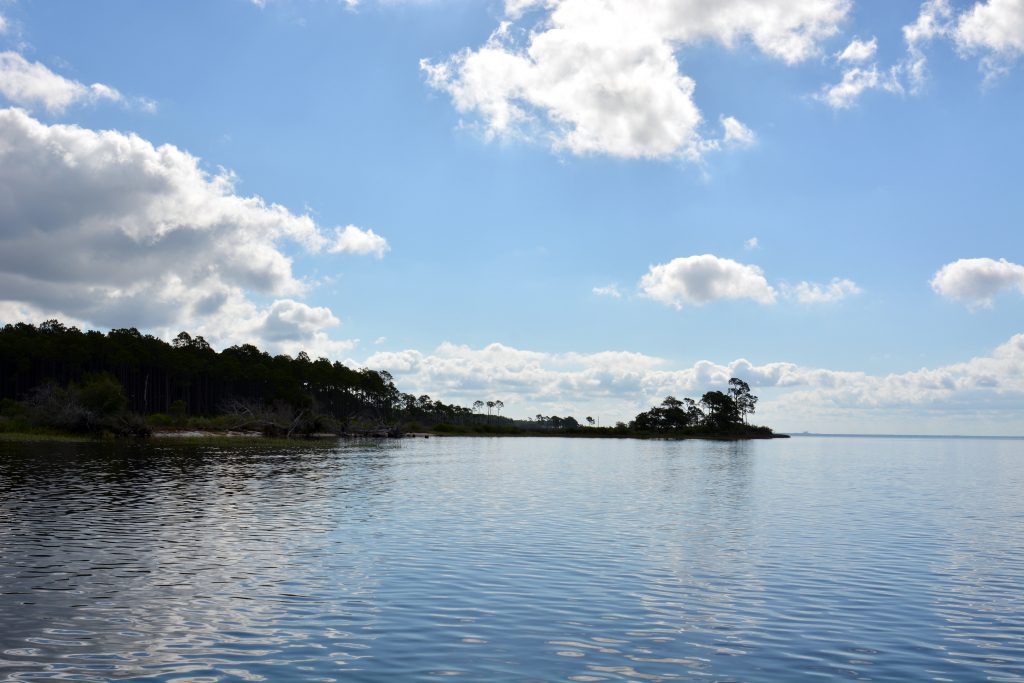 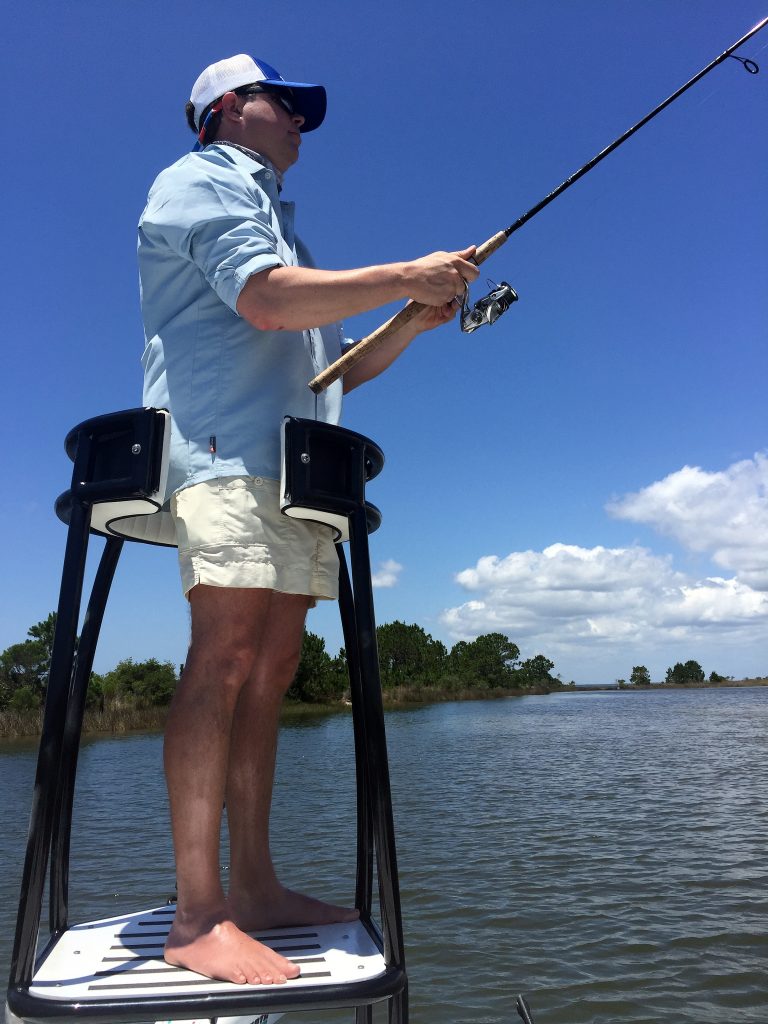 We finally found some bounty.  Mrs. RCS hooked into a massive sea trout, and luckily got it in the boat.  She is a rockstar.  We can’t find anyone who will mount it.  Yet. 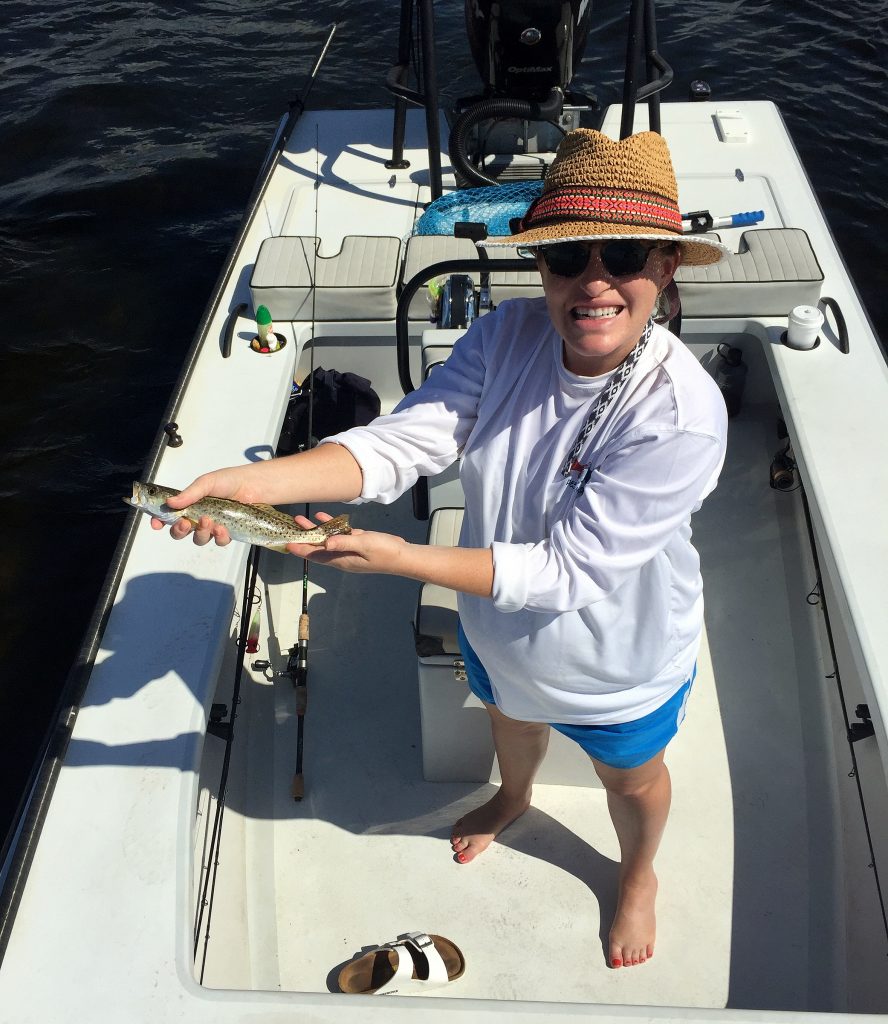 We noticed pretty quickly that the bay had quite a few boats out fishing.  We didn’t catch as many fish as we would have liked, but isn’t that always the case?  As we made our way around the bay, we could see that most of the spots had already been fished, which was fine.  It was a lot of fun to be out on the water with Mrs. RCS and Jack.  She was a total trooper.

The last hour was spent in some protected flats with calm water.  Sticking with the spinning rod, I got as many casts in as I could.  After a long cast towards the shore, I started working the lure.  I immediately felt the hit, and used every bit of power I had to WAIT.  I pulled and set the hook, and immediately almost got pulled out of the boat.  I had a red, and this sucker was strong…very reminiscent of catching bonefish down in Harbour Island.  After a good fight, we got him on the boat: 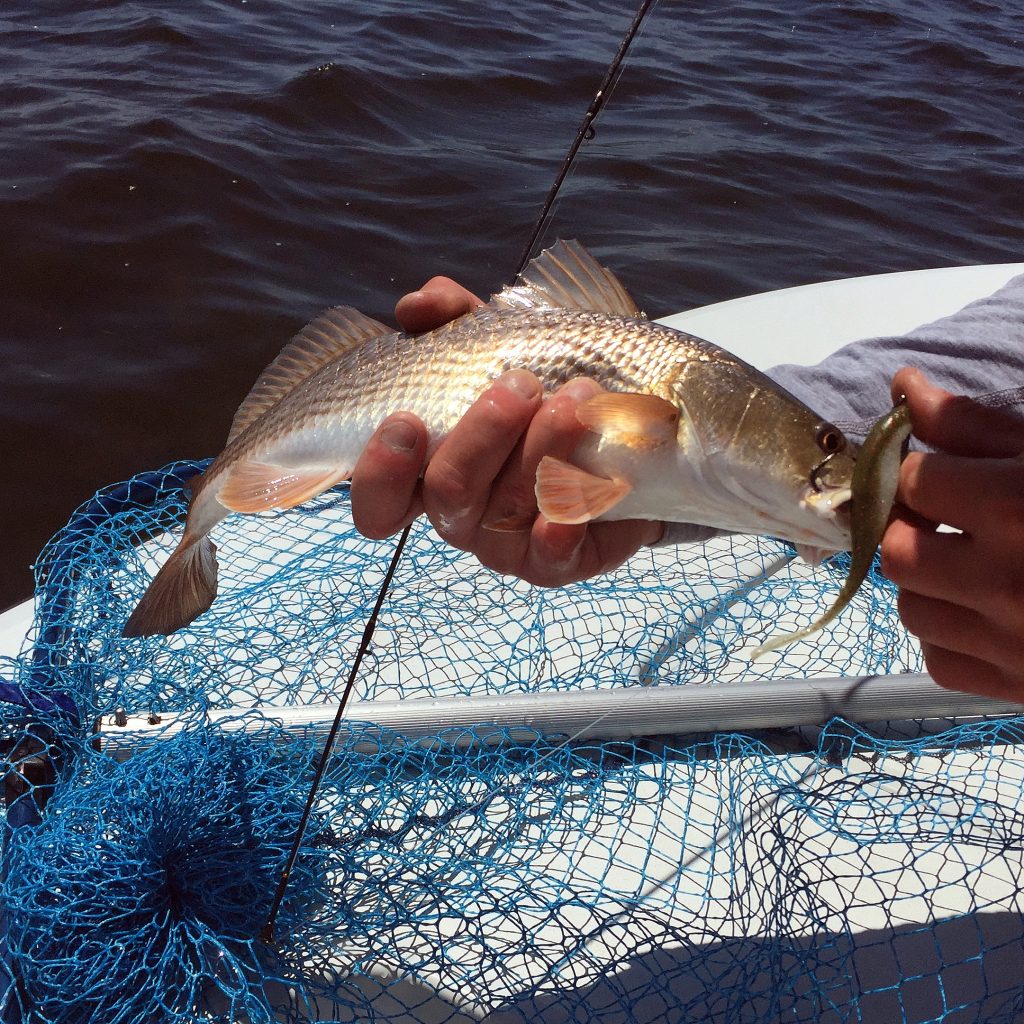 Not the biggest red to be pulled out of the bay, but definitely something to show for our trip.  Honestly, I was really pumped to catch this guy. 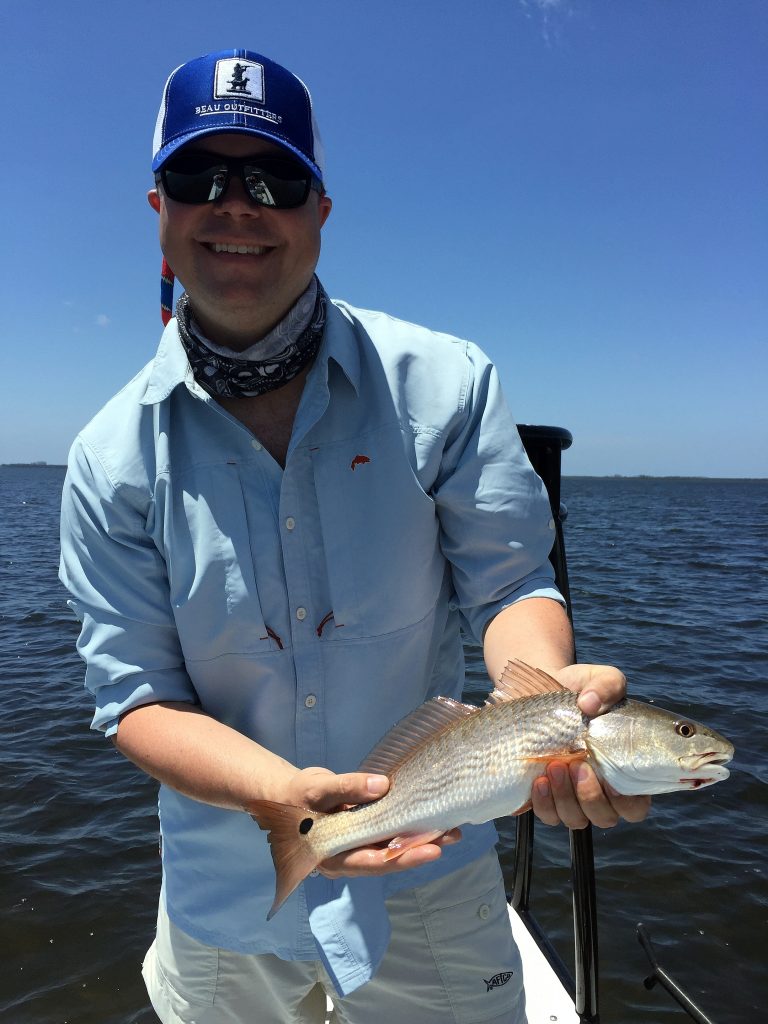 Want to look this good?  See my friends at Beau Outfitters…

We made our way across the bay back to the boat launch.  All in all, the trip was a really great addition to our babymoon.  Mrs. RCS was a trooper.  She made it almost six hours from launch to launch, and she caught a fish! 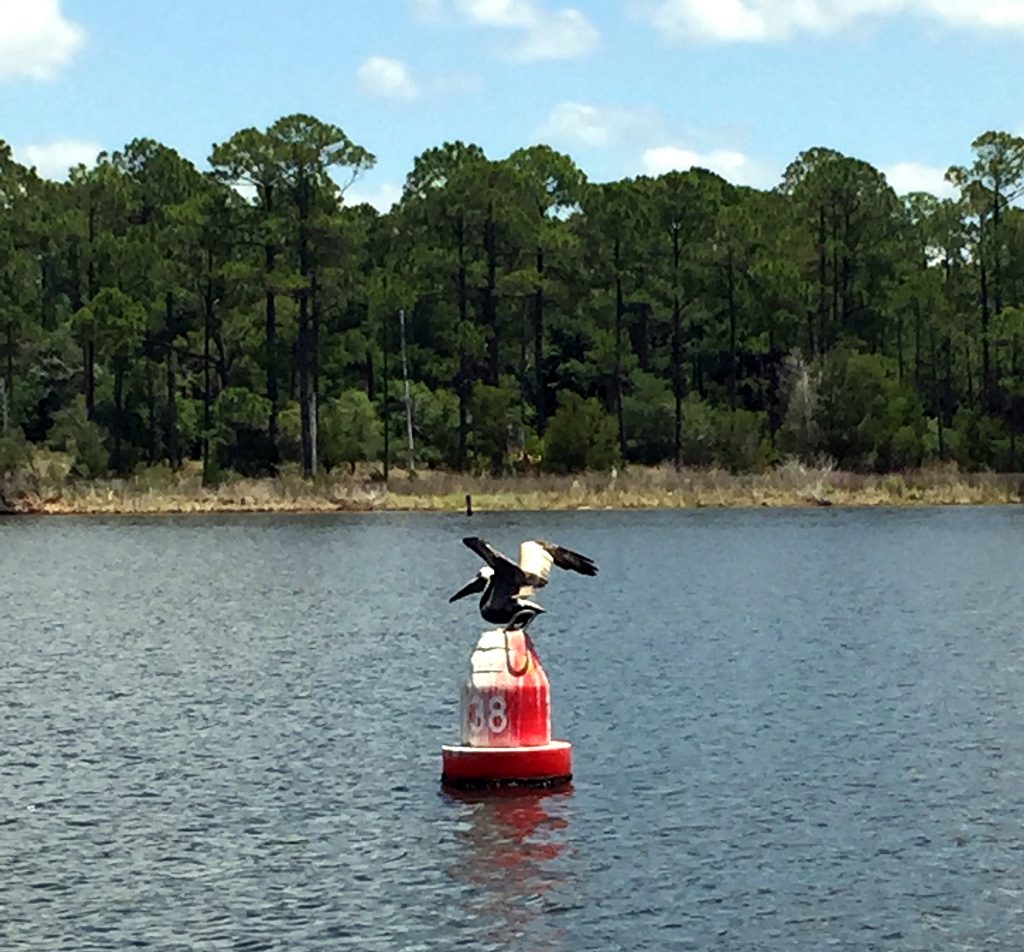 SWE and Jack were awesome.  He made the trip really fun, even though we didn’t catch a ton of fish.  Not something he could control, it was Saturday of Memorial Day weekend.  We are heading back to 30A for a week in September, and are 100% planning on heading out with SWE again.