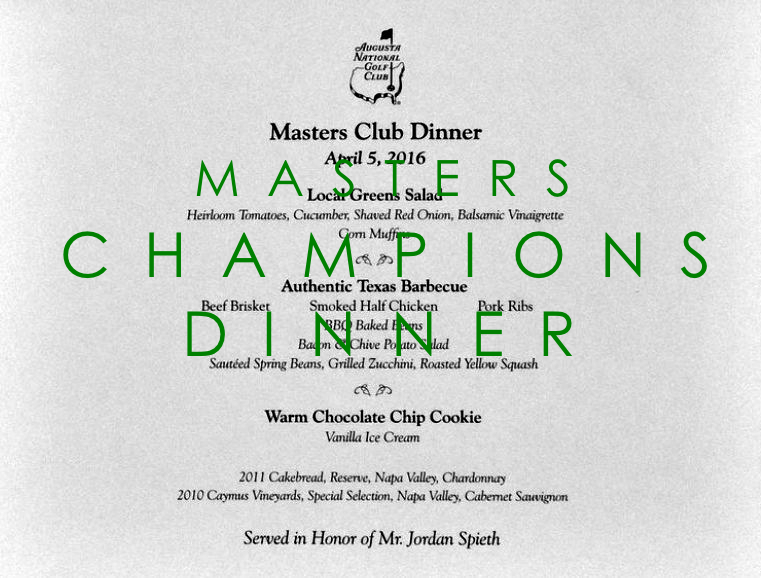 Back in 1952, Ben Hogan had an idea: how about the Master’s champion from the year prior host a dinner. Remember, the winners of the Masters are an exclusive club, so they get together each year on the Tuesday night of the tournament week to welcome the previous year’s winner to the club. That club is officially known as the Masters Club, but it’s unofficially called the Champions Dinner. 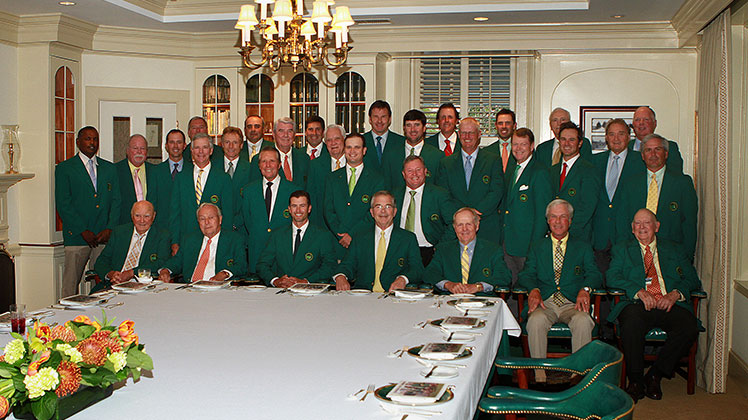 The previous year’s winner gets to select the menu, and he also pays for it. Since the Masters has had champions from all over the world, the menu items are a wide range. Former champs aren’t required to eat what the defending champion is serving. They can order off the Augusta National regular menu. The Members of the Masters Club arrive at the stately white clubhouse wearing their green jackets and ascend a staircase to the second floor, where dinner is served in the library.

While it’s difficult to find some of the early menus, there are a few that stand out:

When Tiger got to choose the menu for the 1998 Champions Dinner, he stuck to a typical 22-year old fare: cheeseburgers, chicken sandwiches, French fries, and milkshakes.

Some good ones from the 90s: Fred Couples served Chicken cacciatore in 1993, ‘Gentle’ Ben Crenshaw served Texas barbecue in 1996, and Mark O’Meara served chicken and steak fajitas, sushi, and tuna sashimi in 1999. It’s hard to imagine Tom Watson plowing down on some Texas BBQ. Instead, he probably wrote another letter to Augusta National complaining about it.

The 2000’s produced some great champions, as well as some good menus. The most memorable Masters champion of that decade was Phil Mickelson in 2004, finally getting that non-major winner stigma off of his back. His 2005 menu was lobster ravioli in tomato cream sauce, Ceasar’s salad, and garlic bread. Phil’s 2007 menu was spot on, serving barbecued ribs, chicken, sausage, and pulled pork with cole slaw. Well done. Mike Weir, our friend from north of the border brought some hometown flare to the 2004 Champions Dinner, serving Elk, wild boar, Arctic char, and Canadian beer. The house money is on quite a few orders off the Augusta National menu that night.

Angel Cabrera served an Argentinian menu of asado, a multi-course barbecue featuring chorizo, blood sausage, short ribs, beef filets and mollejas. Phil went with a Spanish themed menu in 2011 in honor of two-time defending Masters champion Seve Ballesteros, who was battling brain cancer and could not attend (he died a month later). He served seafood paella and machango-topped filet mignon, asparagus, a salad and tortillas, then ice cream-topped apple empanada for dessert.

Charl Schwartzel knocked it out of the park with his South African-themed meal. The opening course consisted of a chilled seafood bar, including shrimp, lobster, crabmeat, crab legs and oysters. The main course was a braai, a South African barbecue, which includes lamb chops, steaks and South African sausages. On the side were salads, cheese, sautéed sweet corn, green beans and Dauphinoise potatoes. Desert was simple – a vanilla ice cream sundae…if they made it that far. Fuzzy Zoeller, who has been known to offer some advice to previous Champions Dinners, said this about Charl’s selection: “Just make sure Schwartzel doesn’t burn the steaks and we’ll have a good time”.

Jordan Spieth did it right in 2016. He went middle-of-the-road in terms of menu, but kept true to his Texas roots. He started with a local greens salad, then ‘Authentic Texas Barbecue’, with beef brisket, smoked half chicken, or pork ribs, BBQ beans, potato salad, and green veggies (for those that didn’t load up on BBQ). He finished it off with a warm chocolate chip cookie with a scoop of vanilla ice cream.  The wine selection was top notch.  Very important.  Well done, sir. 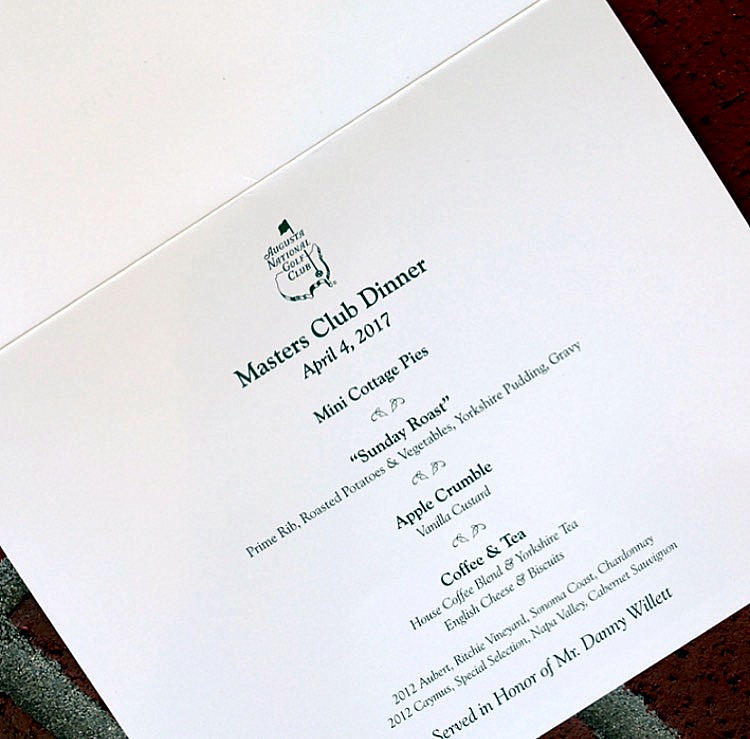 2016 Masters Champion Danny Willett could have gone way too British, sending everyone through the Wendy’s drive through on the way to their hotel.  All in all, he did pretty well.  How can you go wrong with prime rib, roasted potatoes, vanilla custard, and English cheese and biscuits?  I’d eat it.

But let’s talk about Patrick Reed.  I guess we can’t expect too much.  Bone in ribeye with a bunch of creamed vegetables (mac and cheese, corn, and spinach).  I don’t really want to get into it.  I’d rather just move on.

Me?  Good question.  I have a couple options.

Casual, Bib Friendly: I’d probably call my buddies down at Fox Brothers BBQ and tell them to park the smoker on Magnolia Lane, and give everyone a bib.  For dessert, I’d have King of Pops park a cart on the porch.  To drink?  How about Capital City Club’s own Sandwedge (vodka, grapefruit juice, and Fresca).  And some Miller Lite, of course.  We aren’t heathens.

No Bib Required: I’d get Mrs. RCS to make everyone her world famous chicken piccata over angel hair pasta, a gigantic Caesar salad, and pair it with a nice, dry Italian white wine.  Maybe a ’15 Fontevecchia Verdicchio, one of my favorites (and a great price).  Finish it off with Mrs. RCS’s homemade chocolate pudding with whipped cream and a couple bottles of bourbon on the back porch.  Trust me, they’d talk about this one for a couple years.

So, readers, what would you serve at your Champions dinner?