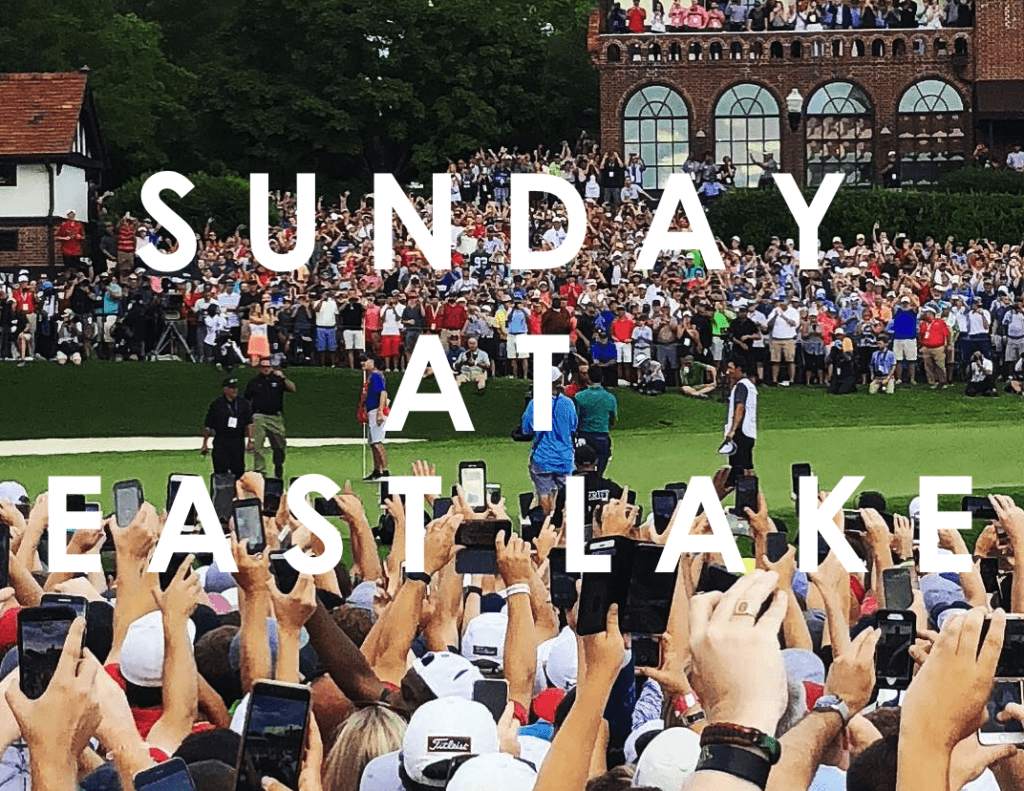 Sunday at East Lake was quite the experience. If you don’t believe in the “Tiger Effect” try having your out of town Brother In Law, Sister In Law show up at your door at 7:00 a.m. sharp ready to head to the course. That doesn’t happen for anyone else, sorry Rory. I hadn’t been to a Tour Championship final round since Brandt Snedeker took it home in 2012 but the difference was night and day. I also got to experience the Jason Dufner-Keegan Bradley duel at the PGA at the Atlanta Athletic Club in 2011 and even though it was a major, it did not even come close to the atmosphere on Sunday.

Besides Tiger, the Tour and East Lake continue to make the experience more patron friendly with the addition of an “Uber Lot” that sits about 50-100 yards from number 13’s fairway. They also have a great central spot to gather by the pro shop with Fox Bros. BBQ among other vendors surrounded by two big TV’s showing the TV Coverage of the round and the other showing the Falcons hosting the Saints at Mercedes Benz. If only they could have put Johnny Miller on mute. 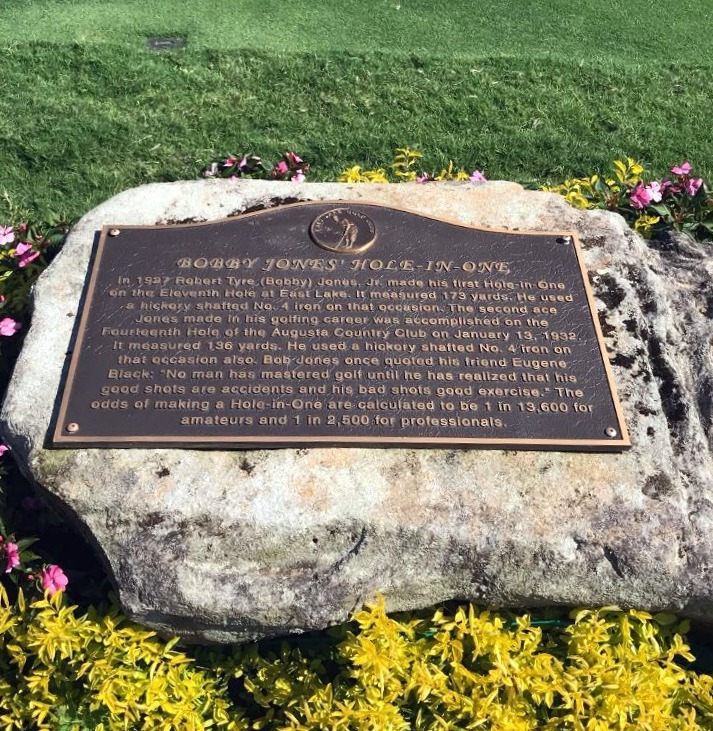 As a rare, young pro-capitalist, it was amazing to see the difference in pro shop inventory from 10:00 a.m. to 2:00 p.m. Even though my wife was disappointed, I’d imagine the PGA Tour has their fan shops drilled down to an exact science when it comes to the amount of merchandise being gone by Sunday afternoon. When it came to headwear, unless you were shopping for your Aunt Donna, you were out of luck. If you’re trying to load up on gear at any tournament, I wouldn’t aim for Sunday and if you do score Sunday tickets, get to the shop ASAP. It was no different at AAC in ’11.

When it came to the golf, being there 37 hours too early had its advantages. With a field of only 30, this is the elite of the elite. At one point we were counting Major Championships on the driving range at 11 when you had Keegan, Bubba, Brooks Koepka and Phil #FIGJAM warming up. Kevin Na was on the far end, I’m sure he felt a little out of his league. 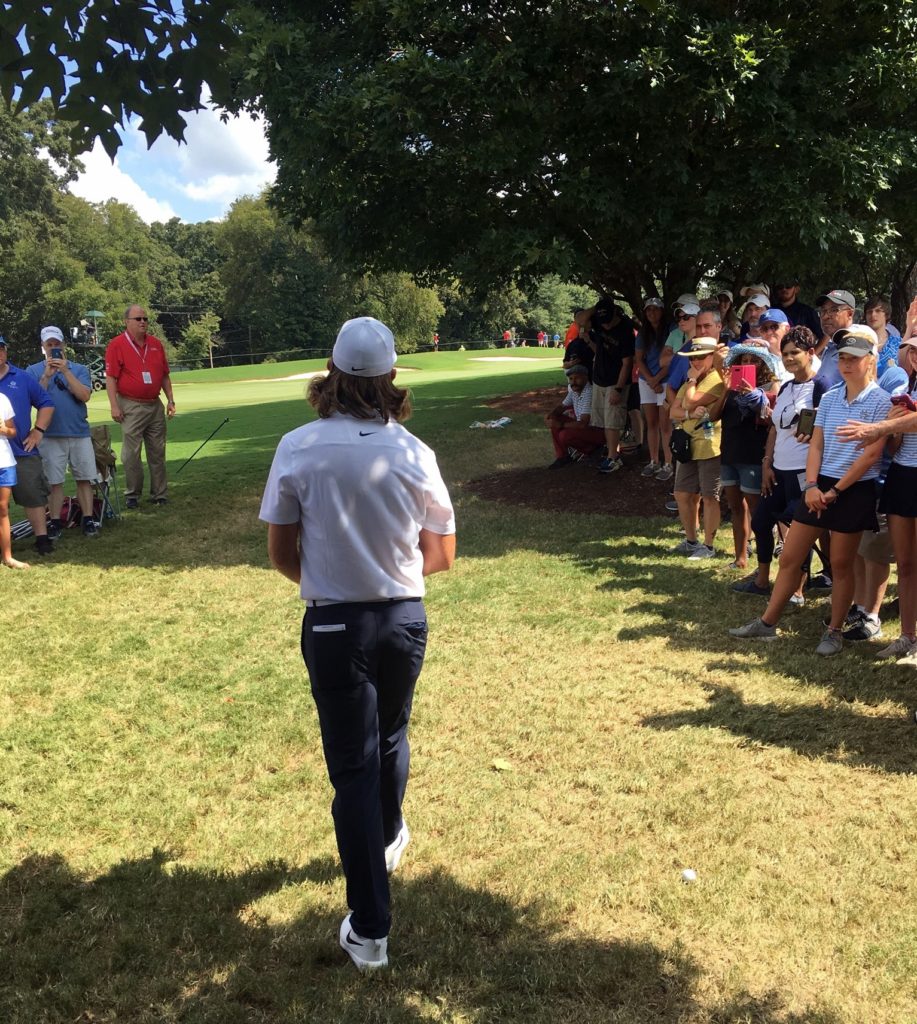 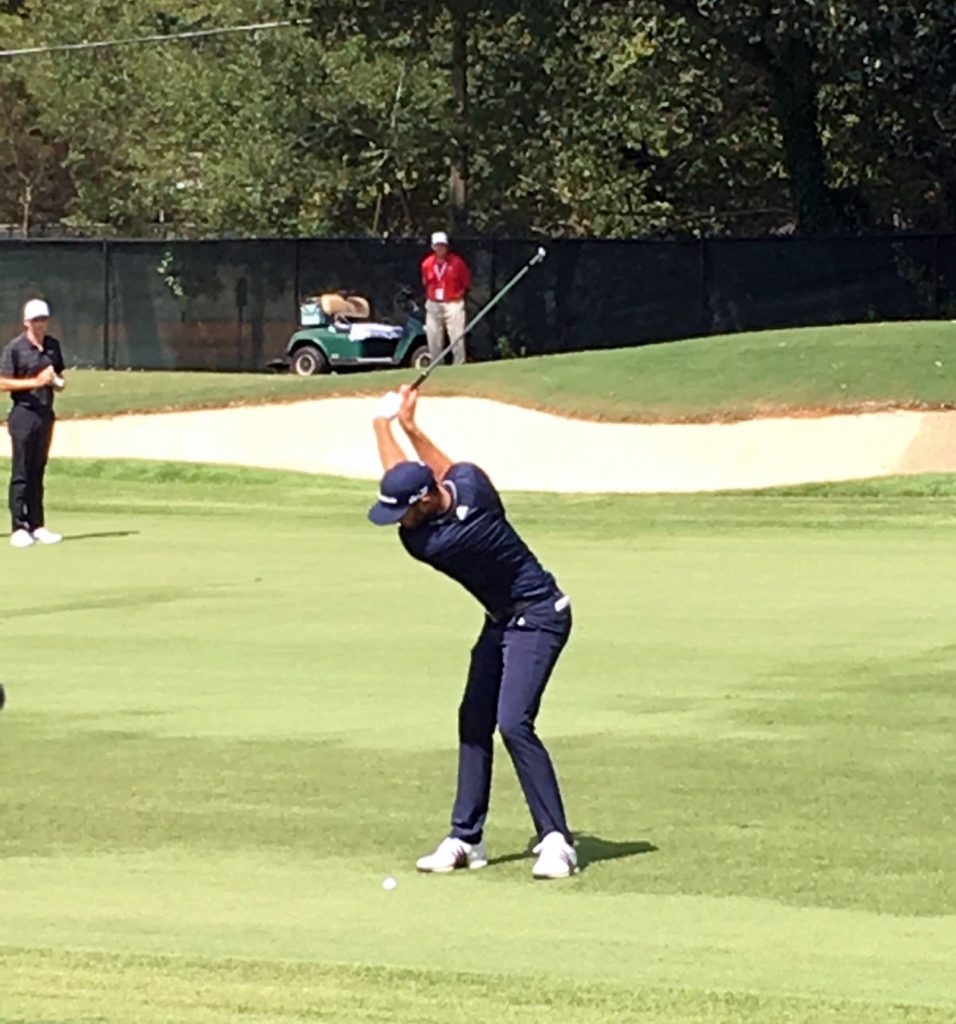 One of the more underrated spots on the golf course in my opinion is the space between 2 Green—-3 Tee—-4 Green——-5 Tee. These holes run parallel to each other and those 4 spots only seem a couple hundred yards apart in a relatively flat space. If you can stay a little ahead of the group you’re interested in and let them come to you, its tough to beat. Phil and Patrick Reed went off first so I got to watch a good bit of them. To Phil’s credit, he seemed to get along well with Reed despite what we’ve all read about the most recent Masters Champ. It’ll be interesting to see if they’re paired together in France at the Ryder Cup or if Captain Furyk will continue to team up Speith and Reed as they have played together a ton in the past team events.

One of my highlights of the day was standing behind the 5th tee when Phil’s swing coach, Andrew Getson walked right up and stood next to me. I had to say something so I tried to play it cool, leaned over and quietly asked, “Hey, how was his warm up this morning?” To his credit, he directly answered in his Australian accent, “he’s playing fine, doesn’t really like the golf course.” This came as bit of a surprise considering he’s won there twice in 2000 and 2009 with some guy Eldrick being the runner up to him both those years. Maybe he’s not a fan of them switching the nines or it no longer suits his eye.

Unfortunately I’m not Phil, but I think the switching of the nines was PERFECT. The new 18 is a great par 5, tons of birdies and eagle opportunities, a perfect finishing hole where as the new no. 9, to the top 30 in the world is a GIR and two putt for par. You’d have to make that hole 280 to make it more interesting television. 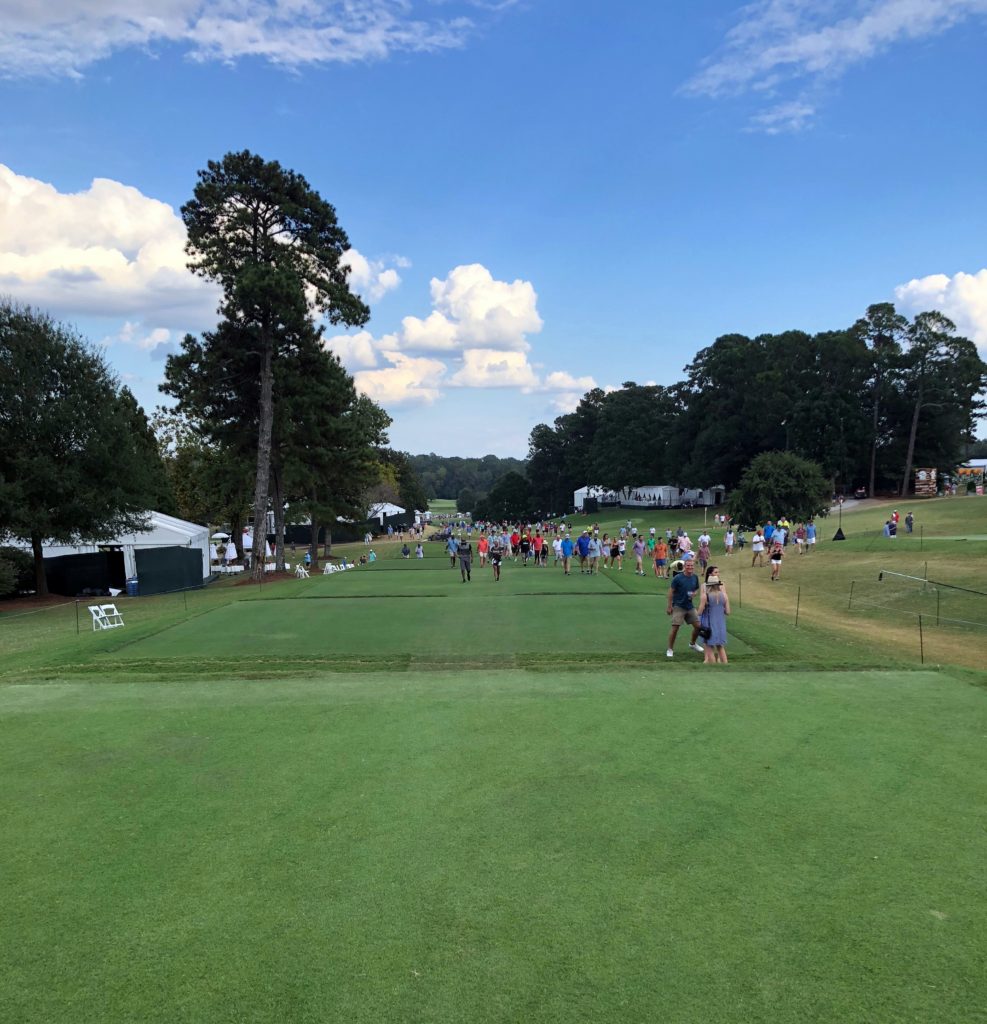 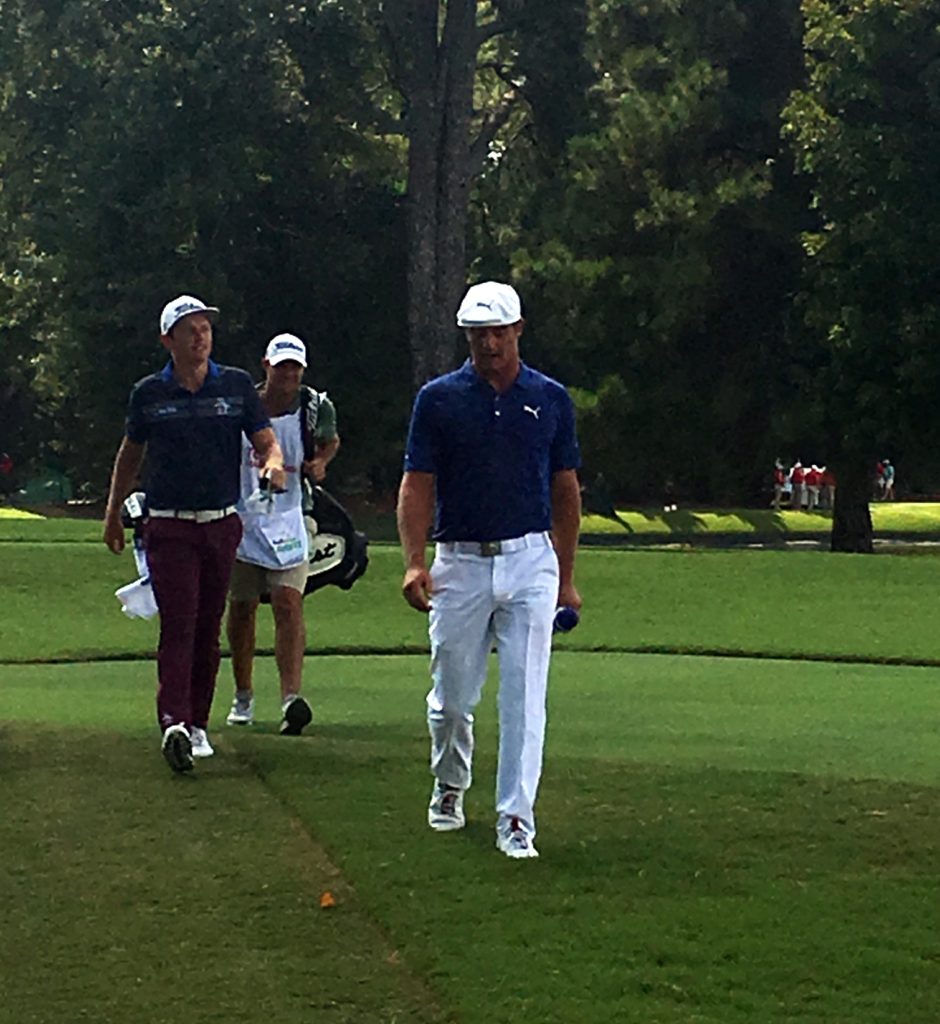 After a quick lunch, the afternoon rolled around and the atmosphere noticeably changed. Call it “electric” or a “buzz” but as a sports fan, it was unlike anything I had ever seen. The patrons were willing Tiger around the course, it was a miracle that Rory broke 80 given the atmosphere and energy for Tiger. The crowd behind him walking down 18 is an image that we’ll see in highlights forever. Most of us will probably have it framed in black and white one day, kind of like the famed Michael Jordan “taking flight” image we continue to see with MJ from the free throw line. Sunday with Tiger was bigger than golf, it was an iconic sports moment.

It was my wife’s first time at a golf tournament, I’ll have to explain at the next one why it seems so different. One of the crazy things with Tiger is that this time last year, it was hard to imagine him winning another tournament to get to 80 worldwide wins, let alone getting to Sam Snead’s record of 82 wins. Now with the way he’s playing and his seemingly great health, its hard NOT seeing him getting to 82 wins. I’m a 7, 8 handicap, certainly no swing coach but Tiger’s swing looks smoother than ever, the speed is there without the violence, and has his Scotty Cameron ever been hotter?

Watching Tiger from the tee, what you could get close enough to see anyways was incredible. What once was a dangerous block to the right or rope hook left has become a controlled, power fade. As the Lee Trevino saying goes, “You can talk to a fade, but a hook won’t listen.” Tiger has always been one of the best iron players ever, his clutch putting has returned and now he’s hitting fairways? IF he can stay healthy, and that’s a big if, who knows what we’ll see over the next 5-10 years. He was dialed in all day and then at a mere sign of trouble on 17..up and down for par. 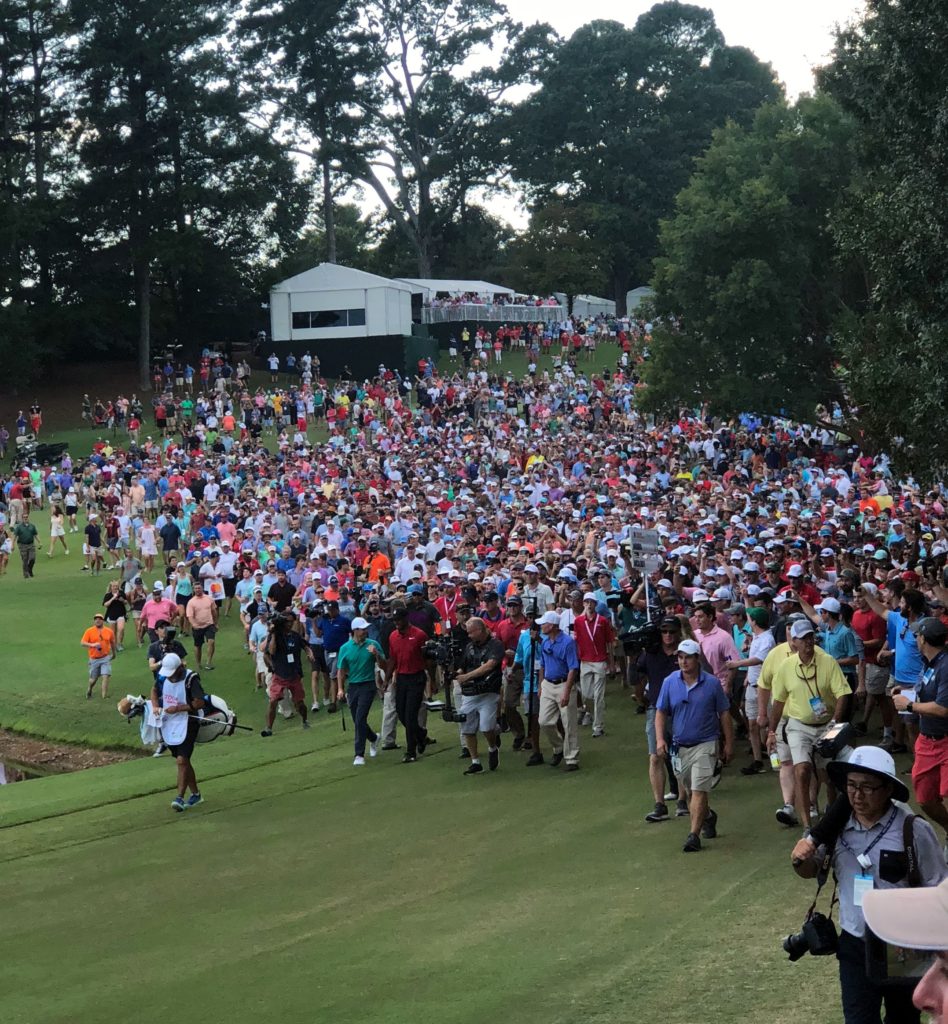 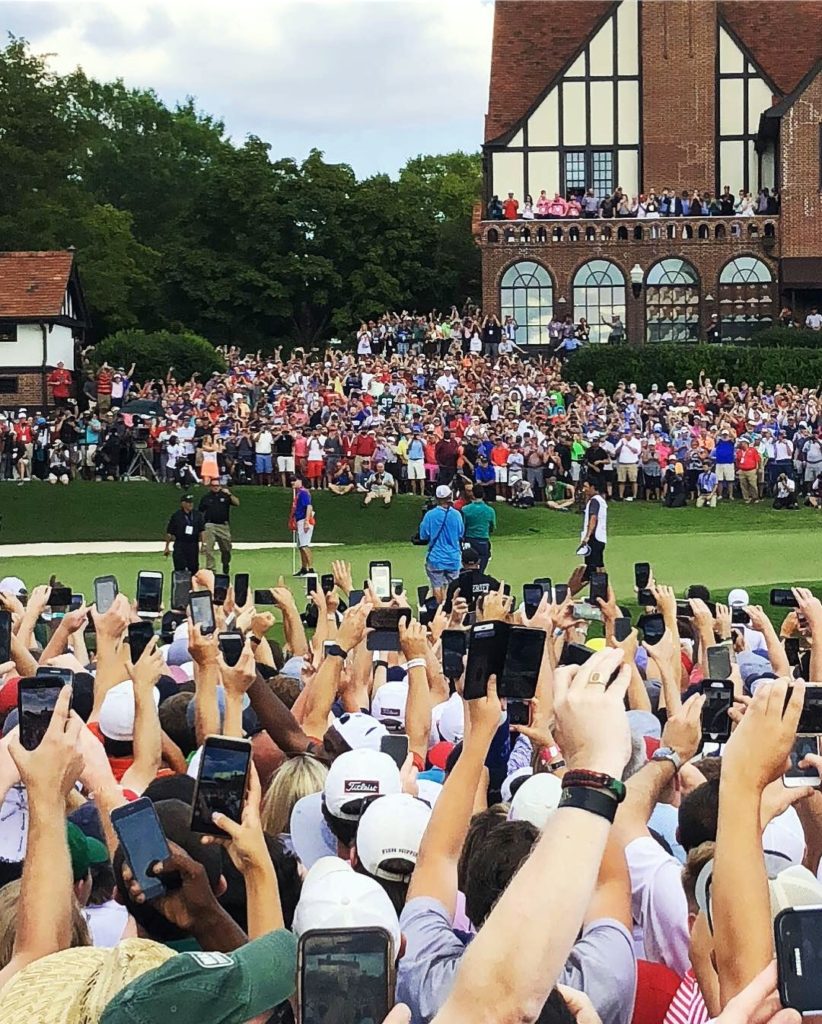 I mentioned it once above, but the scene on 18 was madness. My brother in law was in the mosh pit, I was not. My initial thoughts were, “Could there ever be a better ad for Apple with all the iPhones in the air?” No one takes it all in when you’re holding a phone in the air but that’s besides the point. Have we ever seen a scene like that in sports? Any sport? Has the crowd ever followed Tom Brady from the 50 year line to the locker room? To see that many fans with that amount of passion essentially carry this guy to the finish line with their energy is something we may never see again.

-The Ryder Cup is going to be amazing and should compete with the NFL this weekend for viewership.

-As a Phil guy, I’m worried for him with the upcoming match Thanksgiving weekend against Tiger. They’re two die hard competitors, I think they’ll each be ready but it’ll be a moral victory for Phil if he can keep it close.

-Golf as a sport has never been in better shape. Tiger back, Phil still competitive along with the DEPTH of 20’s and 30’s guys going at it every week. Not to mention that most of them are American, you think tennis from a popularity standpoint could benefit from some American talent not named Serena?

-The Ryder Cup comes back with the U.S. team for two in a row.

This piece is written by my good friend and financial advisor Andrew Matthieson. He’s a good dude and I’ve enjoyed working with his team.

If you enjoy financial reading or want to learn more about him, check out his bio and to see some of the articles he’s written.