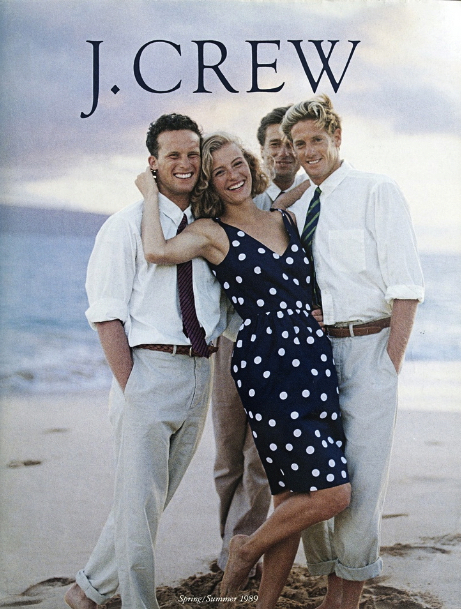 I’m having a hard time understanding the ‘what’ of J. Crew.  They seem to be in a world of chasing earnings reports and making somewhat reactive moves to ensure that their losses aren’t as significant as last quarter.  Their situation has been covered quite a bit in the news, and CEO Mickey Drexler continually cites a ‘challenging retail environment’ as the cause.  I respect Drexler quite a bit, but don’t envy the position he’s in.

J. Crew produces some really great stuff.  No joke.  I like the fit of their shirts and sweaters, their pants are a great casual option, and their Ludlow loafers are still a staple in my rotation.  Mrs. RCS likes J. Crew as well, especially their shorts and workwear (she is in a business-professional environment).  As she puts it: ‘their clothes fit without having to get alterations’.  This post doesn’t touch on women’s wear; I just wanted to give some perspective from my stylish better half.

Here’s what worries me about J. Crew: I haven’t bought anything at full price.  Ever.  Neither has Mrs. RCS (that I know of).  I must get four or five emails a week from J. Crew, every one of them offering some lucrative percentage discount off either a collection, or off of everything.  In addition, their sale section is always slam packed with items, a bunch of which are from the current season.  It’s hard for me to believe that this is a good business model.

Another problem is the actual size of their collection.  There are so many choices, which ultimately moves me into an analysis-paralysis mentality.  It’s hard to shop on their site.  Sid Mashburn has been quoted as saying ‘guys don’t need that many choices when getting dressed’.  I buy that.  I purge my closet at least once a year (admittedly, I’m a bit of a clothes horse) and have become quite a stickler as to what items keeps real estate.  My brother, who is basically my size (but not nearly as good looking) always loads up.

Because of the size of their collection, Goodwills are LOADED with J. Crew.  For example, I found this shirt at last week for $5.35: 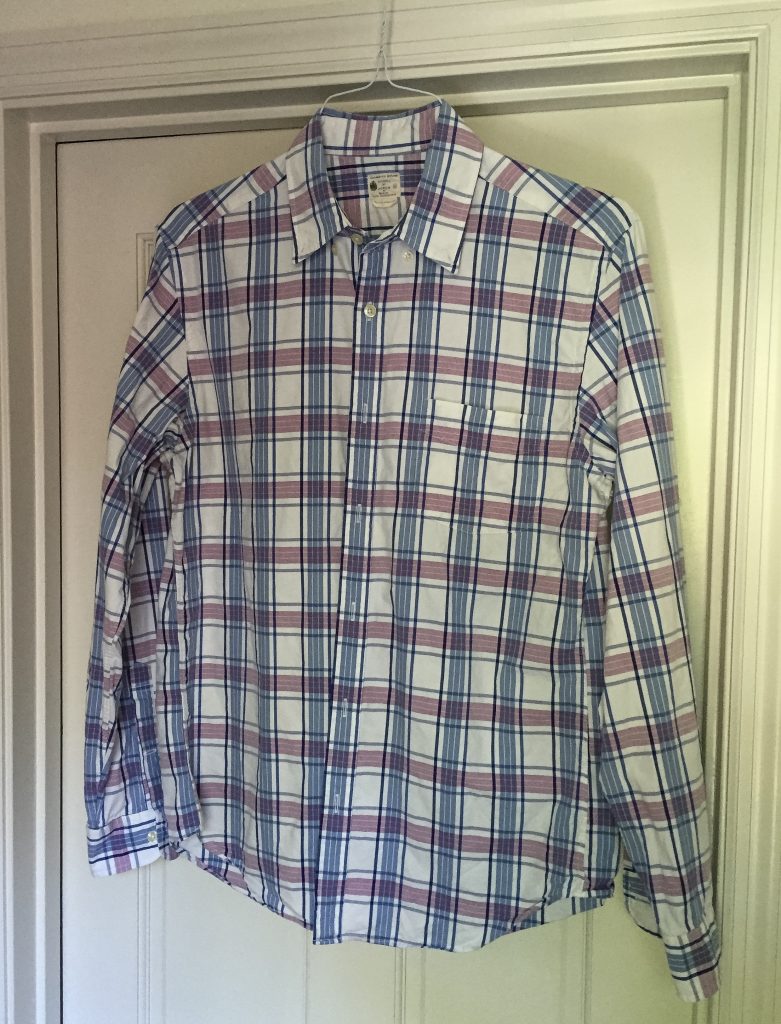 There is nothing wrong with the shirt.  In fact, it looks like it was never worn.  It is a great filler shirt.  Looks good with jeans, khakis, or shorts, and if I run into a mustard-lathered hot dog, I’ll toss it.  I’m out less than six bucks.  I’m not making the argument for Goodwill (which I think does that on it’s own), but for THE OVERABUNDANCE OF J. CREW.  This, I believe is the root of their problem.

So what do they do to fix it?  J. Crew needs to regain a feeling of EXCLUSIVITY.  From this humble blogger (and customer)’s perspective, There are a few ways I believe they can do it:

First, they have to re-train the customer not to expect to buy everything at 30%-40%-50% off.  For example, their slim-fit khakis, known as the 770s, are great, and listed at $75 a pair.  Quite frankly, this is a fair price for the fit and the quality.  The problem is that I know if I need a pair, it’s only a matter of time before I get emailed a coupon and get them for 30% or 40% off of that.  Since there are ALWAYS colors and sizes available, I have no problem waiting for anything I see in the catalog go on sale.

Second, cut the collection in half.  For example: they have 22 different styles of linen sport shirts.  No offense to linen shirt wearers, but they are like corduroy.  Idea vs. execution.  Everyone loves the idea of a linen shirt (and corduroy pants), but no one really wears them, unless you are on vacation or getting pictures made on the beach.  J. Crew should carry a couple styles of linen shirts for the tried and true, but don’t jump the shark. 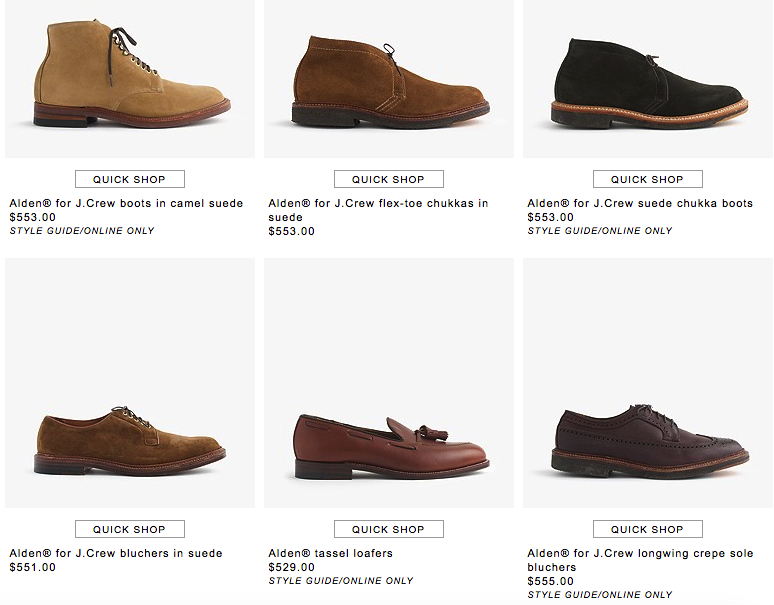 A part of the Alden for J. Crew collection

Third, stop trying to set trends, and understand your swim lane.  Ten years ago, J. Crew was a basics store that competed with The Gap.  They had a few cool and interesting pieces that provided a nice layer of icing to a relatively standard collection.  What’s wrong with that?  What is J. Crew today?  The collaborations are generally good, especially the shoes (Alden, New Balance, and Sperry), but why have so many other vendors that compete with J. Crew line (Gitman Vintage, Cordings, Lacoste, Hill Side)?  J. Crew shoppers should be there to buy J. Crew items.  Not only would this be good for brand loyalty, but the margins would be much better. 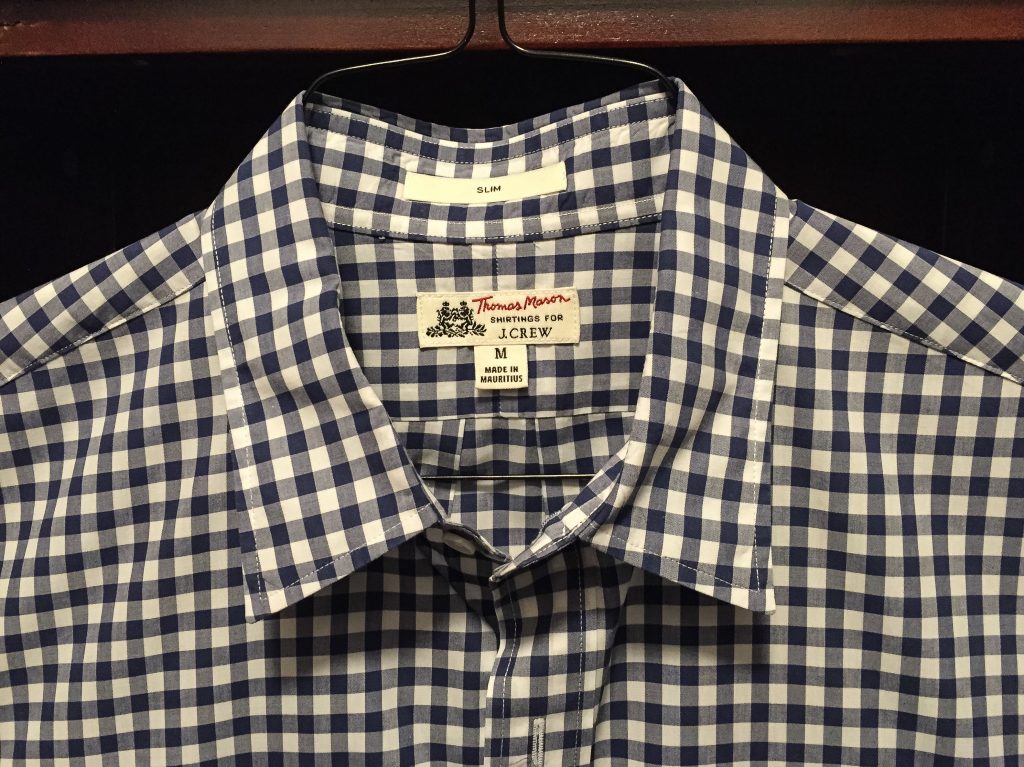 One of my favorite shirts: Thomas Mason for J. Crew navy & white gingham

Forth, design with designers, and sell products exclusive to J. Crew.  They do this with Thomas Mason (which is really only a high-end fabric company), but expand on that.  Want to carry a line of sport coats and suits?  Bring in Southwick or Oxxford to do a special line exclusively for J. Crew.  How about some exclusive Birdwell X J. Crew swimsuits in exclusive colors?  Alan Paine X J. Crew cashmere sweaters…  You get the point.  J. Crew shouldn’t sell anything in their stores that doesn’t have their logo on it, and it should be done sparingly.  For example: do three blazers in navy wool, tan camelhair, and black and cream herringbone.  Two colors of swimsuits.  Four, maybe five, colors of cashmere.  That’s it.  Keep it simple.  Keep it tight.

Finally, define the customer.  J. Crew is shockingly close to becoming a micro-fashion brand like H&M and Uniqlo.  These brands rely on quick quantity over quality, with no clear direction on their collection.  Whatever is hot, the produce it en masse.  Very Kardashian.  I believe that for J. Crew to be successful, they can’t be all things to everyone.  They have to dress a certain type of guy, and focus on dressing him well.

Extra credit: no one rolls their pants like this: 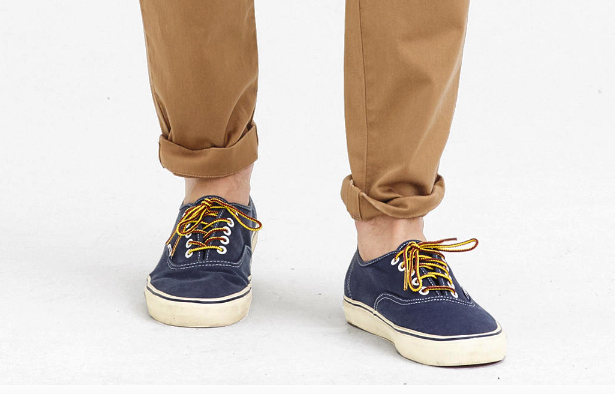 J. Crew is 100% salvageable, but they need some course correction.  As a customer, I’m pulling for them.  They have a place in the #menswear ethos, but need to become their own brand (again).