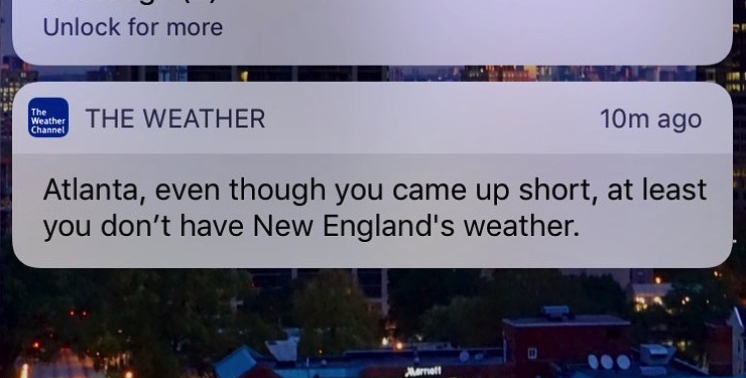 On the biggest stage possible, the Falcons choked away a 25 point lead in Super Bowl LI. It was like watching an under-matched opponent annoy the incumbent, who was simply tired of getting beat. The Patriots mounted the greatest comeback in Super Bowl history, and in true Falcons fashion, we pissed it away. As a UGA fan, we are all too familiar with this storyline…but it never gets any easier. The Atlanta faithful, as well as the HUGE bandwagon are all a bit deflated this morning. Ironic, huh?

The Falcons gave the Patriots all they could handle in the first half. It was eerily reminiscent of the NFC Championship game, where the Falcons laid a whoopin’ on the Packers, and didn’t let up. Well, the Patriots aren’t the Packers. They know how to finish.

What the second half of Super Bowl LI proved to me is this: experience matters. Brady and Belichick have been to (what seem like) 43 Super Bowls together, and the Falcons been once (and were summarily beaten by John Elway in his swan song). Luckily, everyone remembers the Elway stuff, and not the fact that the Falcons were the team they beat. We watched two games on Sunday, separated by a Lady Gaga halftime show. Atlanta won the first half, but New England won the second half, which turned out to be the one that mattered.

Atlanta’s last real drive in the 4th started with a 39 yard catch by Freeman and a 27 yard impossible catch by Julio, and ended with a stupid sack on 3rd and 1, followed by a devastating holding cal that ultimately put the Falcons out of field goal range. Being the level-headed gentleman that I am, I felt like I was outside of myself watching that play. I found myself wanting to throw something heavy through my television when Ryan was sacked. How on earth do you call a pass on 3rd and 1 when all you need is a field goal to win the game? See ya, Shanahan. Enjoy San Francisco. And then the turn of the knife: the Pats won the coin toss in overtime, everyone in the stadium/Houston/watching the game on TV knew it was over. I’m not going to get into the ‘sudden death OT isn’t fair’ argument, because those are the rules. They all have to play the hand they are dealt.

What can Atlanta fans take away? Well, quite a bit. Julio Jones is the best non-QB player in the league. His acrobatic catches defied not only gravity, but any Cirque de Sole contortionist. Grady Jarret played like a wrecking ball. By the numbers, he had three sacks on the golden child, and wreaked havoc in the backfield, drawing double team blocks for most of the second half. Deion Jones was in on almost every tackle. He’s a player, folks. Expect him to be in the league for a LONG time. Matt Ryan was just below great – he made some incredible throws, and managed the game accordingly.

Areas for concern: Alford continues to make HUGE plays, but he’s a binary player. He’s either getting torched or committing a stupid penalty, or coming up with a pick-6. Devonta Freeman is a great running back, but when he completely whiffs on blocks like he did on the 3rd and long vs. Hightower, it’s clear he has work to do. Our offensive tackles mailed it in during the second half. Ryan picked apart the Pats defense in the first half, but it was the running of the bulls in the second half, and our tackles seemed non existent.

After the emotion washes away, we’ll all look back with clear eyes and see that the Falcons have some momentum. Besides Freeney (who is likely to retire), we don’t lose anyone, and all the rookies/second year guys now have a playoff run and a Super Bowl appearance to reference. It’s all about a starting point, and figuring out how to move forward and build. Address the OL, another pass rusher and a LB in the draft, and keep pushing. Ryan is just hitting his prime, and the Falcons are well positioned to make another few runs over the next couple years. It should be fun. It better be. For now, I need to wash this nasty taste out of my mouth.

Also posted in Onward Reserve’s Gazette.  Check it out, folks.