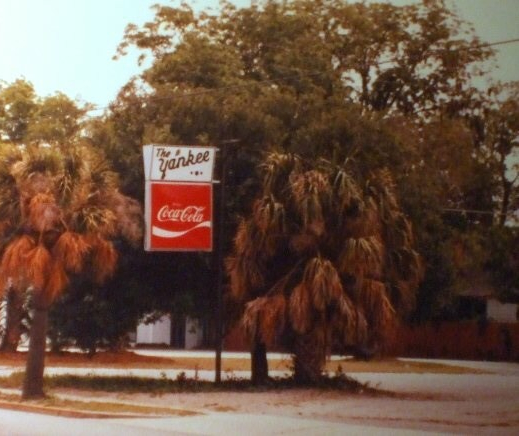 From 1959 until 1985, The Yankee Tavern occupied almost a full city block on Boundary Street in Beaufort, South Carolina

A hole in the wall

Not that I was ever old enough to have one there

Pearl and Manny Palmer were tough New Jersey folks who opened a restaurant in downtown Beaufort in a one-story cinder block building with a brick facade.

They were damned Yankees

The kind we Southern kids know who come South and stay

The Yankee had two entries, one on Boundary Street and one on the side facing Newcastle Street

Everyone entered from Newcastle Street

Manny was the impresario in a white t-shirt

Sometimes that t-shirt had the Playboy bunny on it

Think of Mel of Mel’s Diner fame from the t.v. show Alice but with a Joisey accent and a lot cooler than Mel

Pearl was the enforcer with a tight perm, short fuse, dangling cigarette

Everyone in Beaufort went there

Singles looking for a good time

Marines from Parris Island and the Air Station

Movie stars filming either The Great Santini or The Big Chill

The one demographic not represented were ladies who lunch, but they would come in with their husbands at night or on the weekend

The late Hedy Williams used to drape a paper napkin over the seat before she sat on any of the naugahyde cushioned metal-framed chairs, most of which had a tear or two in them

No one gave her a second look

A local attorney ate there so often for lunch that they named a sandwich after him. I can’t remember what was on The Bruce, but I know it was on the menu forever

Their soup was Damn Good Chowder

You know who you are and were

Bill Bowden, the Palmers’ most trusted employee, would emerge from the back and ask if we wanted him to turn the channel while confirming our standing order of pancakes drowning in syrup with a side of bacon cooked on the griddle. It was he who made sure the cooks put M&M’s in our pancakes if we asked.

Bill, as we called him, was a gentle giant. He cleaned, mopped, bussed tables, wiped down the bar, all while clad in bib overalls. He never stopped moving

We lived five minutes from The Yankee

My parents would order takeout from there, and it would be at our house in no time

The motto at The Yankee: “The Customer is Never Right”

But, the customer was always right at The Yankee

When the drinking age was 18, young folks in town would go to The Yankee to shoot pool, drink beer, and smoke cigarettes.

One evening, a group of teens, maybe some of legal drinking age, maybe some not, cavorted around a pool table. Some were barefooted. Anyway, they got too rowdy and Pearl told them to leave

Systematically, Pearl began to smash beer bottles on the hard concrete slab floor of her own establishment

Older locals told us the story that The Yankee stayed open during Hurricane Gracie. Manny and Pearl kept serving food and drinks in ankle-deep water

Pearl was quoted in the Beaufort Gazette saying, “It was a riot!”

We took tennis lessons from a man named Ben Owens at the municipal tennis courts about a block away from The Yankee. It being the late 70’s and early 80’s, Ben smoked like a chimney as he taught us to be the next Bjorn Borgs and Tracy Austins

Often, Ben would have us drill or play practice games and say in his Winston Light graveled accent, “Y’all keep practicing. I’ll be right back.”

The night The Great Santini premiered in Beaufort, my father took the Paltrow children, including a future Oscar winner, her brother, my brothers, our dear pal Hugh Patrick, and me to The Yankee for pizza. All of our parents had a premier to attend!

We all jumped on the tables, ran around the place, made a bunch of noise

Our favorite game at The Yankee was jumping from chair to chair, table to table

We did it all the time

While we were standing on the tables, Pearl yelled at us across the joint, “Hey, sit down, kids!”

The future Oscar winner looked at us and said, “Who’s that mean old lady?”

We saw said Oscar winner last year in LA in 2018; she asked if The Yankee was still in business

When I told her it closed in the mid-’80s, she sighed and said, “Oh, that’s too bad. Remember the lady who yelled at us?”

I will never forget her or her husband

For years after it closed, we would see folks who worked there

It was a place and time none could replicate

I think Heaven will be a lot like The Yankee

Full of all types of people

All glad to see you

A place to never leave

So, all you fans of The Yankee, if you get to Heaven before me and see Bill, please tell him that Hambone wants to know if he can to turn the t.v. to Bugs Bunny

Photo by Billy Palmer.  G. Hamlin O’Kelley is an RCS contributor and a fine gentleman.  We’re lucky to have his work grace our pages.