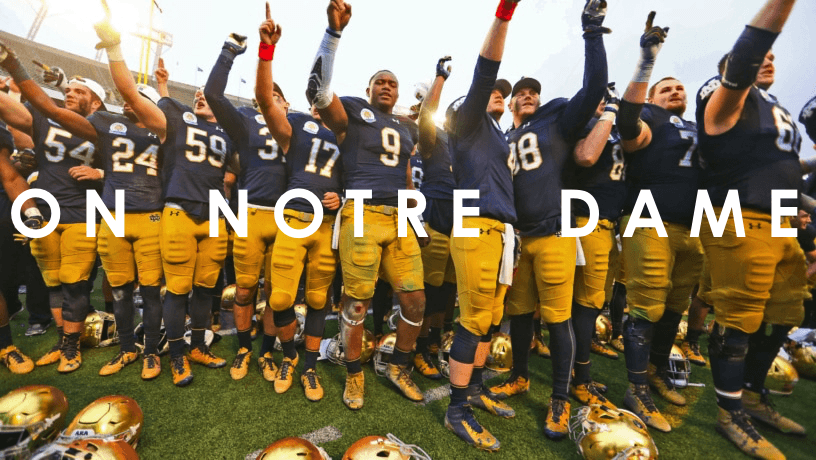 This may come to a surprise to some of you, but I’m not a huge Notre Dame fan.  This season, each time I publicly picked against them, I was likened to an ISIS sympathizer, which just added fuel to my fire.  Let’s recap 2018: The Irish finished their season undefeated, didn’t play in a conference championship, and made it into the playoffs.  This is the BEST thing that can happen to Notre Dame – I’ll tell you why in a minute.

There are a few things about Notre Dame that annoy 99% of college football fans:

First, they aren’t special – not like they think they are.  The historical ‘lore’ of Notre Dame may have mattered back then, but today it doesn’t carry the same weight.  Does Rudy really matter anymore?  No more than Lou Holtz (who was an absolute national treasure on ESPN).  To the vast majority of us, Notre Dame represents rotary telephones, letter cardigan sweaters, glee club, and National Championships over Army.  We are WAY past that.  College football operates in a world of ‘what have you done for me lately’, so all the past championships/etc don’t matter to anyone but their fanbase.

Second, they don’t play in a conference.  The whole ‘independent’ thing was cute when the coaches and AP voters determined rankings and eventually the National Championship, but again, we’ve moved past that.  The conference championship games have become a pre-playoff qualifier, and Notre Dame isn’t included.  How the ACC allowed Notre Dame to be a part of their conference WITHOUT football is a travesty.  Notre Dame got exactly what they wanted: they get to avoid a conference championship game vs. a Clemson, FSU, or Virginia Tech team that will undoubtedly be ranked in the top 10.  I’m sure there are contractual issues with their ridiculous NBC TV contract, but whatever.  The ACC should have never taken the bait.

Third, and the most recent icing on the cake: the Irish got into the playoffs.  Why did Notre Dame get into the playoffs?  Simple: they are undefeated.  And they are a national brand.  And they are not in the SEC (the committee seems adamant to avoid having two teams from the same conference).  I strongly believe that Notre Dame is in the playoff strictly to round out the national appeal of the playoffs, and they had the undefeated angle is the perfect excuse to get them in.  By no means are the four ‘most deserving’ teams included – good luck arguing that, Irish faithful – look at the Vegas lines of all scenarios (vs. UGA or Ohio State).

Fear not, rational college football fans: there is a HUGE silver lining to including Notre Dame in the playoffs. We ALL get to see what they’re really made of, and how they stack up against the best of the best.  This game against Clemson is going to be program defining for the Fighting Irish.  Here’s why:  Remember the 2012 National Championship?  Two minutes into the game, it was OVER.  Notre Dame was completely outmatched, to no one’s surprise.  We weren’t through our first beer before we were looking for the remote.  With 12 minutes left in the first quarter, I was highly anticipating the halftime banter between Mark May and Lou Holtz, but it was clear that ESPN had thrown cold water on both of them.  My guess is the brass were in a state of panic because the ratings were going to tank.  The game was so bad that it took Notre Dame five years to recover.

Fast forward to 2018.  Pundits love to argue that Notre Dame is back.  But as of publication, Clemson is a two touchdown favorite in their playoff game.  OK, so let’s play this out: If Notre Dame gets throttled by Clemson in the same vein as the 2012 NC, how can anyone ever take this version of the Irish seriously?   They will become Central Florida v2.  Think about what a 49-10 loss on a national stage would do to the Irish?  They are scheduled to play Clemson who has an NFL caliber defense and an arsenal of offensive weapons – neither of which the Irish have seen all year.

My prediction is that a crushing loss sets the Irish program back at least five years.  This will fast forward the argument for a 6 or 8 team playoff, mainly as an attempt to protect the network’s financial interest by nodding to the national brands (Notre Dame, Texas, USC) that are all on hard times.  Irish football will be forced to join the ACC, removing the conference championship argument.  Brian Kelly will remain though the transition, but as recruiting starts to taper off, he’ll be shown the door…enter dirtbag Urban Meyer, fresh off his second ‘break’.  Perfect.

At that point, the playing field is level, which is all 99% of college football fans want.