With every fall comes homecoming.  That time when you head back to the Alma Mater to relive the old glory days with your pledge brothers and (usually) a free pass from your significant other.  It’s as important to avoid getting arrested as it is to participate in homecoming.  Those were some formative years, and should be celebrated with the old crew.  And let’s not forget, the school needs your money.  Remember, you aren’t 21 anymore, so dress like you’ve been there before.  Here’s how to do it right…Ole Miss style: 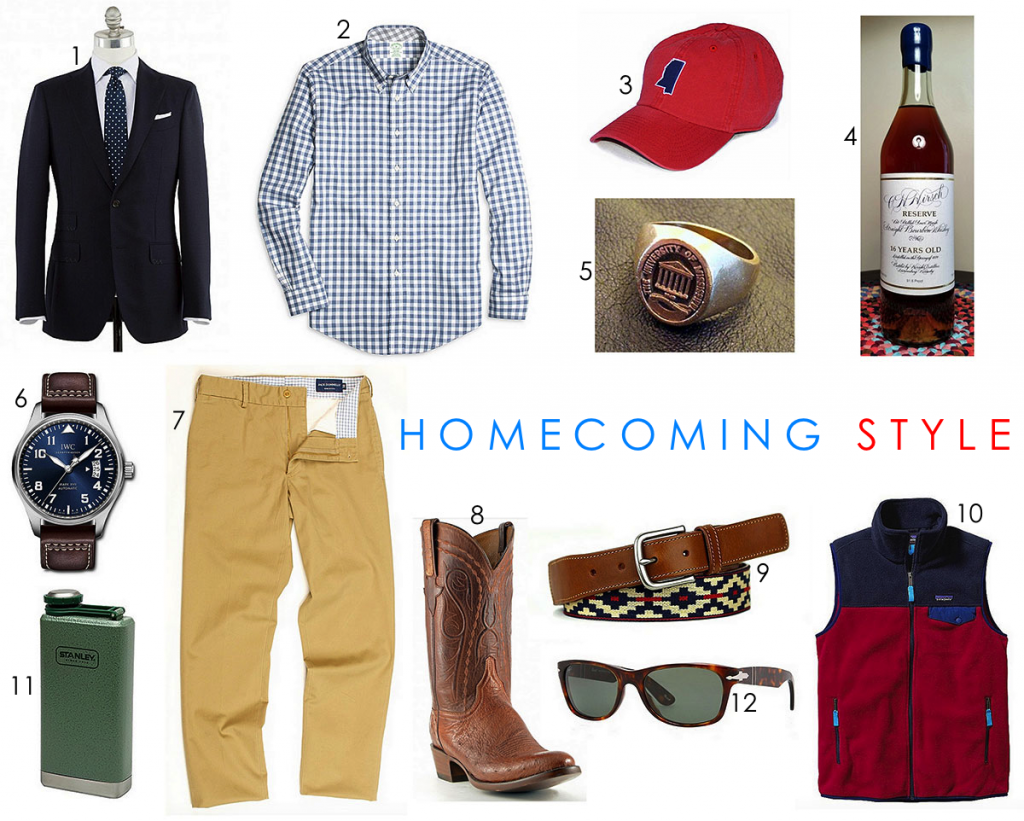 1. Sid Mashburn Navy Blue Blazer:  It always starts with the navy blazer.  And it should be a good one.  Make sure it fits well, which will separate you from the most recent pledge class wearing their Jos. A Bank uniforms.  This is the workhorse of the wardrobe, so use the pockets accordingly.
2. Brooks Brothers Gingham Sport Shirt:  Wear a nice shirt in school colors.  Iron it.  Skip the gas station-esque logo’ed version, as everyone knows you are pulling for the home team.
3. State Traditions Oxford Gameday Hat:  Again, avoid the NASCAR-esque adorned, battery-powered hat and go for something a little more subtle.  It’s like a Masters hat for your college.  Extra points if it has a country club logo.
4. A.H. Hirsch Reserve Blue Wax 16 Year Old Bourbon:  It’s impolite to show up to a party empty handed, so bring a bottle of the GOOD stuff…it’s worth few pulls before kickoff…
5. Class Ring:  You earned it, and there isn’t a better time to wear it.  I prefer the signet version.  Unless you won a conference championship or a Super Bowl, remember that less is more.
6. IWC Mark XVII Le Petit Prince Watch:  By now I hope you’ve retired the Timex.
7. Jack Donnelly Slim Fit Dalton Khakis:  There are plenty of options for khakis, but why not do it right?  Get a pair that is customizable, and will fit just right.  Not to mention they are made in the USA.
8. Lucchese Cowboy Boots:  There isn’t a better look than a good pair of Luccheses…and here’s a reason to update your old pair with a new ostrich set.  They break in quickly, so give them a week’s worth of wear before the event and you’ll be good to go.
9. La Matera Trucha Belt:  Look, an outfit of khakis, a gingham shirt, and khakis is pretty run of the mill, but add this belt to the mix, and show them you really know what you are doing.  There is something to be said for having your own personal style.
10. Patagonia Snap T Vest:  Right before the game, ditch the blazer and add this vest.
11. Stanley Flask:  Just the right size to bring a little sauce into the game…we all know the boot trick.  Just don’t sneak in that bourbon from #4.  Go with a good mixing bourbon…there will be plenty at the house.
12. Persol Wayfarer Sunglasses:  Let the undergrads sport the Ray Bans.  Show them the way with these Persols.